Since founding her label IAMISIGO in 2009, designer Bubu Ogisi has used fashion as a site through which to explore cultural difference and creativity. Growing up between London and Lagos, and then going on to study in Paris, the designer says it took moving out of Africa to bring her closer to it. After working for Tiffany Amber, Ogisi is now based mainly between Lagos, Accra, and Nairobi, and is on a continual mission to understand and embrace the diversity and complexity of African culture. Whether it’s employing traditional Kente weaving techniques to reaffirm the art of craftsmanship, or juxtaposing the notion of Ghanaian femininity with her native Nigeria, Ogisi harnesses the communicative power of clothes with every collection she produces.

As part of INDIE’s AW19 print issue, we spoke to Stephen Tayo, Wavy The Creator, Bubu Ogisi, Aduke Shitta-Bey and WAFFLESNCREAM about life in Lagos and how its hype is being skewed by the West. 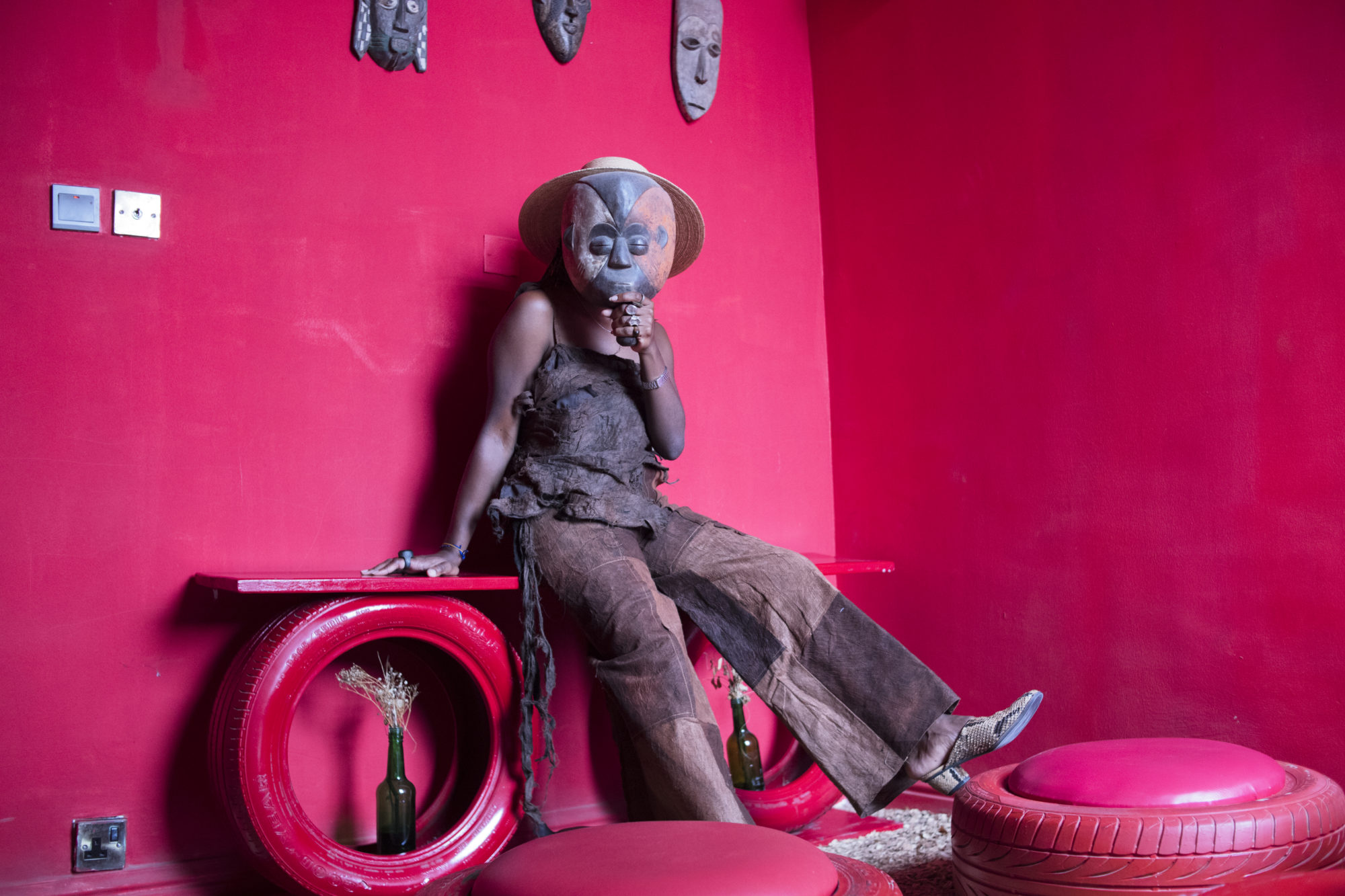 First of all, congratulations. I think IAMISIGO really reaffirms the art of craft, which is increasingly lost from fashion.

Thank you! Everyone thinks it’s better to start big and I don’t believe in that. In Africa, slow fashion has always been the essential—it’s always been about creating stuff by hand. It’s couture in a sense, but we don’t see it like that; we just see it as creating.

There’s a definite disconnect between the essence of style and fashion as a system.

And your work goes a lot deeper than that—why has this idea of cultural identity, specifically African identity, been so important to you?

Everyone in middle-class Nigeria is always looking to move to London or America, but my idea was to fix myself in my own continent and so I moved over to Ghana. It was there that I experienced a different state of mind—because growing up in London and Lagos meant I had the best of both worlds. In Ghana, a country in the same continent as Nigeria, but still so different, I was able to see those different spaces of mind and realise that in different environments and within different tribes, people have always had different ways of expressing themselves.

And fashion is so visible, so present—it makes those differences even more apparent.

Exactly. In Ghana, I realised that the Nigerian sense of fashion was way different to Ghana’s, and that was different from any other African country. The shape of the female body is different— and accentuated so differently. It made me reflect on how I expressed myself as a woman. What you eat affects how you look—I’d never given that very much thought before. Of course, if the food is different, the cuisine, then the style is different, too.

Those environmental factors affect everything. You’ve also spent time in East Africa; that difference must be even more pronounced there.

Totally. When my mum would take me travelling, we’d go on road trips through different African countries. Going through the East was crazy—with every border, you’d notice how everything drastically changed. I loved how people would alter their outfits, make something out of nothing. That’s what real creativity is.

Do you think living in Europe changed your perception of Africa?

For sure. Growing up in London and Paris, I was the only black person in my class. Once my teacher asked me to do a project on Africa, you know, the Africans should do the African projects. I was adding Egypt, Morocco, everything, and this teacher told me ‘no, do a project on Africa—black Africa.’ I never knew there was a difference. I never knew there was this divide of how people think about black Africa and the rest of Africa. It took me moving out of the continent to realise this perception existed.

And that’s a major theme of your work, too.

Exactly. I’m trying to move about different parts of Africa to sort of understand why there’s this divide. I want to celebrate difference but also find a new way to link the East with the West. In my time in East Africa, I really realised different people are struggling for different things—through colonial regimes, through possession of one’s spiritual self. I love to express that because I believe that, as a human being, whatever you wear becomes you. It’s spiritual in a sense—for that moment in time, you’re spiritually connected to the outside, expressing your identity and your sense of self.

It seems like there’s been a recent shift in the way people are looking at Lagos, especially over here in Europe. Do you think that comes from a good place?

I mean, if people want to fetishise Lagos, or Nigeria or Africa, in a sense, that’s their problem, not mine. This has been my ‘fetish’ since I was born. I don’t know if it’s bad or good—in a sense, it’s just realising who the true artists are, who the true people are, and exactly what people are trying to gain from us. I mean, studying world history, you understand that there are different decades and centuries that each have a different group of norms, and somehow it goes full circle. There was a time when Japanese culture was trending, and now it’s African culture. I feel like we have paid our dues, done our time.

Do you notice a difference between the way your work is received in Nigeria, in Africa, and outside?

Yeah, I would say that there is a difference. Outside of Nigeria, a lot of people understand me more as this ‘expressive’ artist, and in Nigeria, you also have to think of all the other situations—social, political. If you’re clearly ‘out of the box,’ then you’re clearly not okay; there’s something wrong with you. That’s the situation. I really, really appreciate the international scene. Fashion on the African continent has always been an essential part of my life—of our lives—but it’s been overlooked. It’s forced us to push ourselves more. We’ve done the work now, and we’ll push until we get noticed. More and more designers have been popping up and more creatives are popping up to try to fill up the different gaps in this scene—to create a little competition. 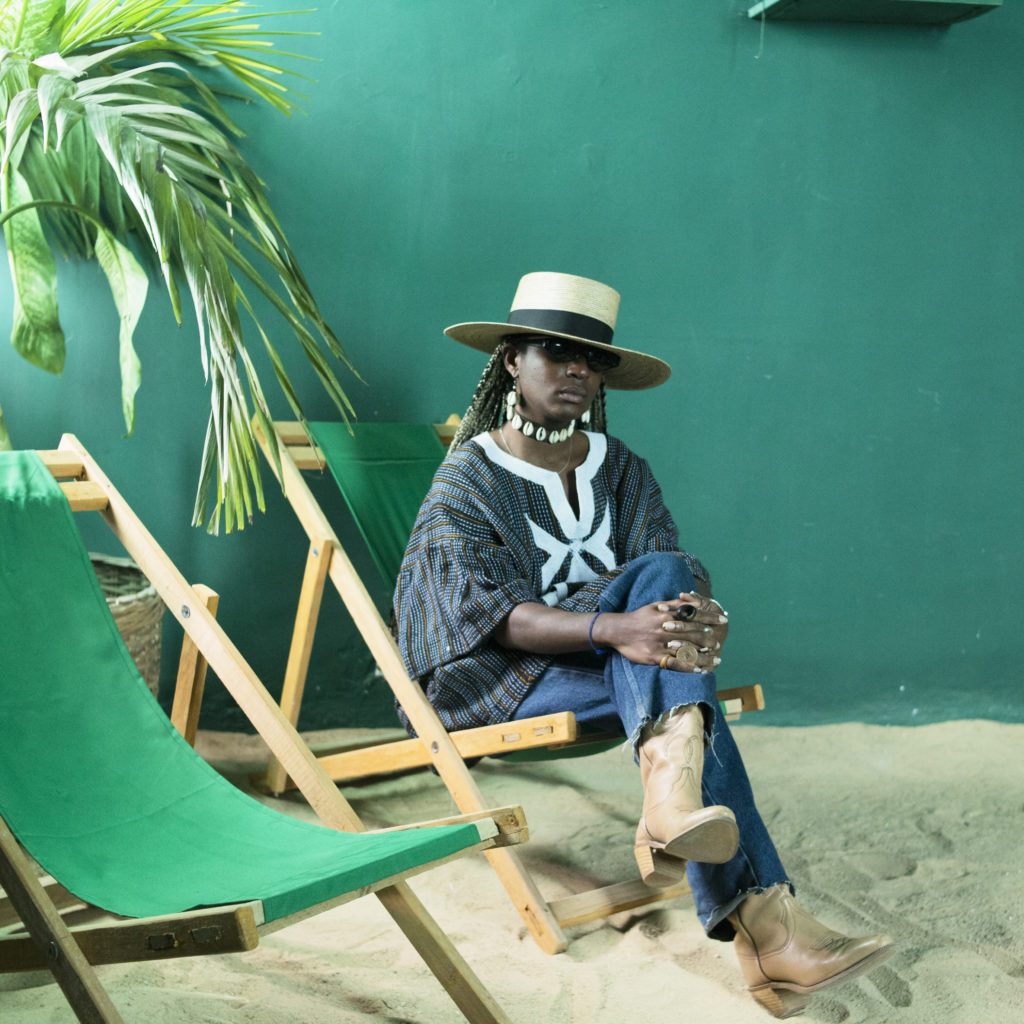