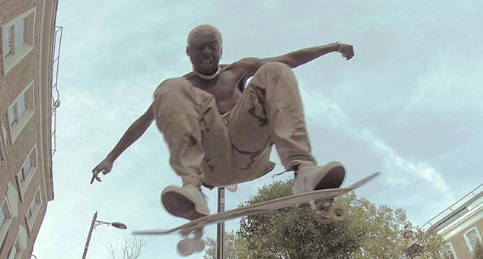 WAFFLESNCREAM SKATE CREW WAS BORN IN LEEDS BUT MADE IN LAGOS

For Jomi Marcus-Bello, success isn’t about the spotlight. He co-founded skate brand and collective WAFFLESNCREAM in Leeds back in 2008, along with his brother Nifemi and friend KC Obijiakwu, with the intention of being exactly that—a collective. When they brought their vision home to Lagos in 2015, WAFFLESNCREAM became the first skate crew in Nigeria and the four years since have been monumental, not only for the collective but for skate culture on the African continent. Though exhibitions and clothing releases are something the crew finesse, their unrelenting aim is to create Lagos’ first skate park—a dream set to become a reality by 2020.

When you brought WAFFLES N CREAM back to Lagos, what did the skate scene look like? Were people receptive to what you were doing?

There were like one or two people skating, just dotted around the city. I think a lot of people that followed the brand from when I was in Leeds and Lusaka—as soon as we said we were in Lagos, it kind of sparked their interest. We opened a little studio, a very tiny one, like five square metres, literally a desk and a chair and a couch. From there we did our designs and went to skate. Then we realised that Nigeria was still hot—we decided to get a store; we did an exhibition and the rest is history.

Yeah. There were specific cities, like Leeds, Lusaka, Lagos, Gaborone and Johannesburg and Accra—they were the ones really following what we were doing.

And did you find that there was a specific demographic uniting people within those places?

I think it was different kinds of people. But definitely the left-wing people—free-thinkers, LGBTQ+ people. It’s still a very different unorthodox brand because it shouldn’t be in Lagos, Nigeria. It’s weird. It’s a weird brand cos here it’s quite conservative.

But I guess that’s also what makes it exciting, and different?

Yeah, in Lagos it’s a different style and our infrastructure is different. The city’s built totally differently.

And how have you seen it grow since 2015, both in terms of interest and infrastructure? I suppose you’ve been responsible for a lot of that change as well?

[Laughs] I guess not.

Exactly. Me and the whole team haven’t changed—the only difference is that people are taking it more seriously.

But you’ve grown from a desk and a chair…

[Laughs] true. But the people haven’t changed in terms of personality and goals—I think we’re all the same people. We probably just want to do more. A lot of the things we wanted to do in the past, in 2015, we can actually do them now in 2019. We didn’t do it because of finances or infrastructure or some people close[d] the door at us and didn’t take us seriously. I think we’re still the same as 2015; it’s just more access. In terms of growth, I dunno, I’m not the one who can tell you that. I cannot tell you that.

How do you feel about Lagos being co-opted as a buzzword? Do you see it like that?

I don’t know, man. I think it’s quite funny. It’s baffling to us why people are suddenly interested. In 2010, I would have been knocking on your door saying ‘Hey, look, check out what’s going on in our city.’ Now it’s the other way around.  I think the rest of the world is just looking for the next thing. I think everybody has recycled everything. The internet has opened up Lagos and Africa.

Do you think there has been any recent change in the Lagos scene that’s catalysed that?

Look, England has about four million Nigerians, first-gen, second-gen—they’ve been there for a long time. It’s funny how a country like England didn’t realise they had so much culture literally at their doorstep. Nothing has really changed in Lagos— we had Fela [Kuti], we had [King] Sunny Adé. And all the ‘greats’ have been here—The Beatles came to Lagos, The Rolling Stones, BobMarley, Muhammad Ali—Lagos has always been a thing.

So this hype is just a new trend, you think?

I think we’re doing the exact same shit we’ve always been doing and even if there was no hype, we’d still be doing the same thing. We’ll still be trying to build our skatepark. I don’t think it’s going to change. Like I said, we’re blessed that people are paying attention, but we were always going to do it anyways. So, personally, the outside world is not that much of a focal point.