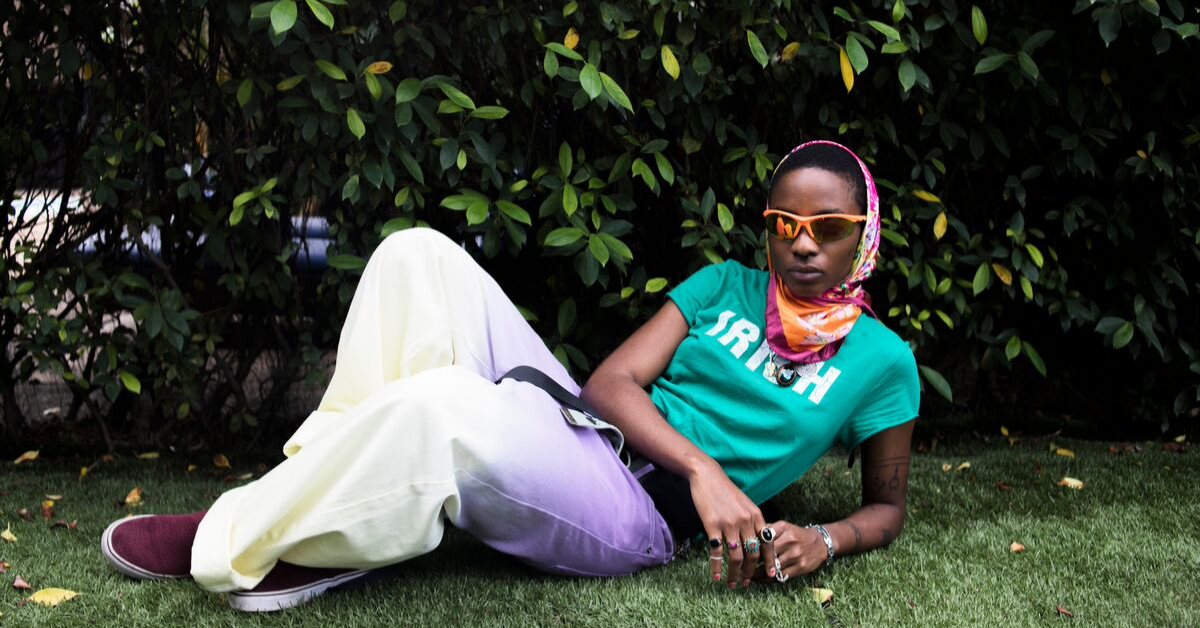 Born and raised in Lagos, Jennifer Ejoke—better known as Wavy The Creator—is one of the few female musicians to have stood her ground,  and successfully carved out her own space amid the male-dominated ‘Alté’ wave—at least as far as Western hype is concerned. Having relocated to Missouri in her early teens, and living in Houston, Ejoke made her start in the creative industry as a photographer, before returning to Lagos and releasing her explosive single H.I.G.H. in 2017. Since then, she’s been performing on the same stage as the likes of J Hus and Davido, and been signed to Tinie Tempah’s label, Disturbing London. She’s now based between Ghana, Lagos, London, and Amsterdam.

You’re getting noticed because of music, but that wasn’t originally your ‘thing,’ right?

It definitely wasn’t in my plan. One day in Houston, I randomly went to the studio with my friend and we just recorded—and  it was really good. I never did anything with it because it was very personal—I was going through a tough period in my life. Then when I came back to Lagos, I was surrounded by a lot of musicians—I was working with them, I was touring with them, I was doing photography and filming. I met this producer who wanted me to shoot some photos for him, and he made a deal with me.He said, ‘you know what, if you shoot some photos, you can have some studio time and we’ll just work around and see what we come up with.’ I recorded H.I.G.H and it sounded great, and I just decided I was going to put it out on my birthday. That was the first time I dropped music, actually.

And how has your life changed since then?

It’s been great. I’ve been able to learn a lot—I’ve learned the ins and outs of the industry. I’m doing things now that I didn’t think I would ever do because of music. I’ve been places I didn’t think I’d go, performed on stages with artists who are already big in the industry. There have been ups and downs, but music is a very special art and it requires a lot of attention. Since I started doing it, my focus has been more on that. But again, the end goal is to be able to do and use every creative outlet and everything that I own, and put them all into use.

You grew up in Lagos and then moved to the US—how did you find that transition?

It was shocking. It was very different—especially going to Missouri. I had to adapt to the new lifestyle and my new environment, and in the end, it was a very good experience. It’s great to be able to be a part of those two completely different places and cultures.

Did that affect your perception of self?

It really did. It was very obvious. I lived in a predominantly white area—and then my high school. It was very obvious that there were a certain amount of Africans and a certain amount of African Americans—there were different cultures and backgrounds, but you can tell the difference. Basically, everyone was still trying to understand each other because of our different backgrounds and cultures.

And was that difficult to navigate?

Yeah definitely—being in high school, everyone’s different. It’s really a place where a lot of personalities are born, and you meet different kinds of people—people decide if they want to be associated with you based on certain things. It was definitely a challenge adjusting to that, coming from Africa. It was an eye- opener to understanding people and culture.

You said the creative community in Lagos helped you realise your potential and inspired you to put stuff out. Do you think there’s more support and solidarity compared to scenes like London or New York?

Yeah, definitely. It feels like we’re only now finding out that we can openly create and do anything we want to and share it with the world. That’s still fresh for us, so now we’re trying to do as much as we can. We have the platforms now, we have the time, we have the people that want to accept and receive everything that we’re putting out, because we haven’t given it to them before. These all seem like fresh and new and exciting ideas. It’s a lot easier for us to be like, ‘oh, I do this, I want to share this,’ and for people to get excited about it. In a place like America, where people have been doing this for a long time, it might be a lot harder for you to get through the door because there’s already a whole lot of people doing this stuff. In Lagos, it didn’t really kick off until maybe 2017, and since then, a lot more people have come out on the creative scene in Nigeria—they’re doing a lot more. It’s very exciting and everybody just wants to be a part of that experience now because it’s something fresh that we haven’t done in forever. I think that’s where the support comes from.

There’s definitely something exciting about that kind of ingenuity and people doing it for themselves—fucking the system.

Exactly, exactly. Everything’s changing. It’s very exciting. I guess, especially for me—at first, I was nervous to go back because  I wasn’t sure if Nigeria had accepted the fact that you can be creative and be successful at that. When I went in 2017, it was like someone opened the door and everyone had this mentality of ‘let’s do this’—so it’s been flowing since then.

When guys like Burna [Boy], Santi, and Odunsi are blowing up, do you feel like it’s been harder to make a name for yourself as a woman in the same industry?

To be honest, it’s just not as flexible for women. It’s never been that way in the industry here; it’s always been more male-dominated. Right now, I feel like the biggest struggle for females in the industry is just understanding that it’s possible for us to do this. I feel like we still have to come to terms with the fact that women haven’t been given a lot of opportunities—we need to open up those doors. You can really tell that the industry is lacking women—and it’s not because women aren’t doing stuff; there’s a whole lot of women doing stuff in Nigeria, but they’re just not getting the attention, you feel me, and that’s because it’s always been this way. I think we’re coming up and we’re trying; we’re trying to get people to understand it’s okay for us to get as much attention as the guys because we’re doing as much as they’re doing, and we’re making great stuff.

For sure. It’s about making that space.

Yeah, exactly. I’m always standing for being your own individual, no matter what your gender is or what you look like. But it’s also important for me to let young females know that they can be their own person and be the best of the best in whatever they want to do by just believing in themselves, you know, and not having to wait for someone to tell them what to do or when to do it. It’s about having strong enough willpower to know who you are and where you’re going with it, regardless of what’s in front of you.