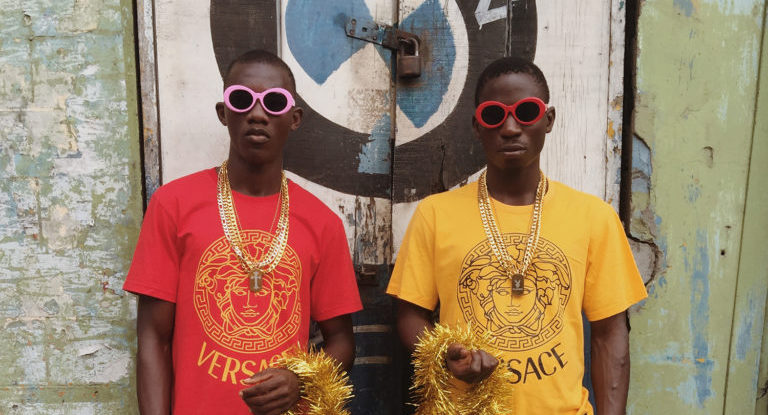 STEPHEN TAYO IS THE LAGOSIAN PHOTOGRAPHER TELLING IT LIKE IT IS

When Stephen Tayo first started getting recognition as a photographer, he was still shooting on an iPhone 5. Since then, the 25-year-old has lent his expert eye and human sensibility to projects for the New York Times, Vogue, and most recently, INDIE. But making a name for himself internationally has never been as important to Tayo as communicating the spirit of the people and places he captures. Through his evocative portraits—lensing everyone from drag queens to identical twins—Tayo forces viewers to rethink and unlearn the misconceptions that the West has propagated, not only about his hometown but the continent of Africa.

So, you grew up in Lagos…

Yes, I’ve been living in Lagos all my life. I’m 25 now—I’ve lived here pretty much since I was a baby, even though technically I was born in Ekiti State. I spent three days there. I’ve always been doing my thing in Lagos. I went to university here.

I guess you’ve seen it change a lot in the last 25 years?

What about the creative scene?

I think that part of Lagos—that crew of people trying to execute what they feel is beautiful, has always existed. They might not necessarily have always got the spotlight, but they are getting it now. With social media, people are visible to the world. I’m sure somewhere, somehow, there are always people doing their bit to be different and pushing what they believe in, but now there’s more visibility. Everyone is a celebrity now.

It’s coming from the inside, you mean?

Yeah—if you are singing, you can put it on YouTube; as a photographer, you can put your stuff on Instagram. You can put it on Twitter, on Facebook—there’s a lot of channels to push yourself. I think, in the past few years—maybe in the last ten, 15 years—it’s always been the West coming to tell our story for us. For so long we’ve just seen people talk about us, we don’t know who is behind the lens. The expatriates are coming in more for their own benefit, I guess. But things are beginning to change. The past few years, we’ve seen the people who live and work here telling their own story. We’re telling people what’s really going on in Africa, so I think a lot of us now have been able to— we’re trying to own our story and tell it to the world.

Have you felt that personally—do you feel you’ve often been misrepresented or misconstrued?

I couldn’t say one thing that’s the worst or most frequent, but when I showed in Amsterdam, for example, I was telling people how I went to university and studied philosophy, and people were like ‘oh, wow!’ I still meet so many people who think Africa is a country. Africa is a continent. It’s the same as when people say ‘Europe.’ People should know about the different countries—what makes Ghana different from Nigeria, what makes South Africa different from Nigeria. We’re telling people: ‘This is Lagos.’

Yeah, and that doesn’t mean ‘this is Africa,’ or even ‘this is Nigeria.’

Right. I always let people know that this story is confined by what happens in Lagos, not the whole of Nigeria. It’s a struggle that we are fighting now—to make people understand us, I really try to lay the emphasis all the time; I actually never stop laying the emphasis. So that’s pretty much it.

Is that something you also try to communicate through your work?

I wouldn’t say it’s the focus of my job—I focus on my story, but for every opportunity I have, I also really try to let people understand Lagos, understand Nigeria. I try to address the perception or misconception that we’ve seen in the media over the years. Emphasising where I live is my way of educating people. People can see Lagos as a city in Nigeria, as a state in Nigeria, and learn that Ebute Metta is also part of that.

Exactly. I understand there might be an aesthetic to my images, but, ideally, I just love to tell different stories. Even if I’m shooting old people—I love them to be dressed up, look very fabulous, very graceful—gorgeous. For me, it’s about making sure people look beautiful, regardless of who they are.

You studied philosophy—what drew you to that subject?

I was just so curious about humanity. When I registered for the course, I felt like it would help me understand life in general. I wasn’t going to uni to make money, so for me, it was more like I need to be aware of what this is really about. I knew it would lead me to a lot of places—to understand ethics, metaphysics, epistemology, and that’s really what philosophy is about.

What’s the ultimate validation for you?

I think most young people these days are looking for validation on social media, but for me, I love it when I ask the person that was photographed, ‘what do you think about this picture? Do you like the way you’re sitting here? Do you like the background?’ If they can validate it to be beautiful, I’m totally fine, to be honest.