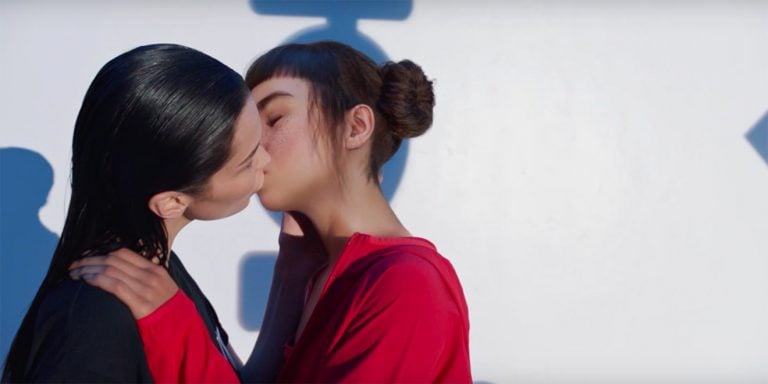 A few weeks ago, Calvin Klein unveiled an ad which showed supermodel Bella Hadid making out with rendered influencer Lil Miquela. The campaign, though initially fascinating in terms of illusionistic effect, was met with instant and heavy-handed backlash from the LGBTQ+ community and its allies for blatant queer baiting just days ahead of Pride month.

Queer baiting is a term which, pretty self-explanatorily, is used to describe a situation in which queer people are baited into buying into something. Be it books, television, cinema, or good old fashioned Capitalism, queer baiting attempts to coerce the LGBTQ+ community into consuming a product by feigning inclusivity, solidarity and representation. Calvin Klein is a good example—featuring a same sex kiss between Bella Hadid, who has been in high profile heterosexual relationships ever since surfacing in the industry, and Lil Miquela, who (though she may have used her platform to promote LGBTQ+ topics at large), is de facto NOT ACTUALLY REAL—but it’s far from the only one.

No, this is no isolated incident, it’s the latest in a long line of marketing ploys which assimilate queer culture for popularity—acting under the pretence of solidarity. Hints, references and subtleties are Easter-egg-dropped into products to make them more attractive for LGBTQ+ viewers, listeners and consumers. At the same time, however, creators fear they’ll disaffect those not in touch with anything outside of a conservative state of mind, meaning they keep said Easter eggs as “inoffensive” as possible; gay, but not too gay. So where do we draw the line between artistic freedom and social responsibility?

Queer representation, it seems, is at an all time high across all forms of media. With ongoing, restless conversation and activism claiming and reclaiming seats at the table for people unwilling and unable to abide by heteronormative definitions of how to live a life, we’ve seen major progress made in music, television and film. But as much as this progress is appreciated, there’s no denying the execution of LGBTQ+-depictions often lacks real depth and understanding. While present day offers a historic maximum in genuinely inclusive entertainment, there are just as many formats that have done nothing but the bare minimum to vaguely incorporate narratives approachable for non-hetero, non-cis audiences.

The Calvin Klein ad is case-in-point here—the campaign reads as tone-deaf, especially because until this, the brand’s public efforts towards casting sexually, gender, and bodily diverse individuals have performed quite nicely. The fashion house has since released an apologetic statement following the backlash, and while the damage is already done, it’s sparked a deeper debate around LGBTQ+ representation and visibility, which is all the more pertinent given Pride and the vile sales strategies that have come to accompany it. Recently, CK ambassador and POSE star Indya Moore, aligned with activists to condemn corporations who profit from Pride-themed, rainbow-coloured merchandise without ever actually contributing financially to the people in question. It’s become commonplace in capitalism, as every year we see the likes of H&M and Primark roll out yet another multi-coloured dose of merch—modern day queer baiting outside of its entertainment origins.

But if we consider queer baiting in the context of its creation, how far have we come? Skimming the large and vastly expanding range of TV shows and movies, we can tell there’s an increase in queer casting, storytelling, and -sharing, as well as well-engineered plots representative of what the heteronormative mainstream likes to call ‘alternative’ lifestyles. Nevertheless, as we squint our eyes, a lot of what we see is only inclusive to a certain degree. Surprising or not, but many depictions of LGBTQ+ identities, particularly those aimed at younger audiences, are still cliché ridden, idealised, redundantly over-exaggerated or come in unbelievably good looking, hyper-sexual packages. Teen drama-thriller Riverdale—one of the most popular shows on air—is a prime example. One of the series’ most prominent couples consists of redhead bombshell Cheryl Blossom and 8-inch-heel-wearing bad gal Toni Topaz—two overtly femme lesbians, fit and supposedly aged 17. They seduce one another every other scene dressed in gear that looks as though it’s come straight off the Victoria’s Secret runway. The same goes for the guys, who check every box on the scale for old-timey attractiveness, from six-packs to straight-acting.

While there may be people for whom this depiction rings true, it has the potential to do serious damage. In some ways, it feels we’ve come no further than decade old shows that set impossible standards, more or less drastically expelling “the others”, pop culturally and beyond. That being said, it’s important not to naysay or discredit the advances that have been made and the one’s involved in pushing them. Likewise, it must also be taken into consideration that specifically in the arts, be it fashion or cinema, there is and has to be space for creative liberty—how else do we justify Call Me By Your Name, a film carried by a story of a secret, same-sex couple, played however by two straight men?

Unfortunately, queer baiting is alive and well, even if only in abstract forms of what it is, and the methods we use to annihilate these streams of negative influence have to be multilayered. Appreciative of the direction we appear to be moving in at a sometimes faster, sometimes slower pace—see Sex Education, for instance—we can’t keep quiet about the many sometimes easier, sometimes harder detectable deficits. Gradually, little by little, we can help insure more substantial portraitures of human nature, those a younger generation is deserving of and those some of us may not have had the privilege to enjoy growing up.