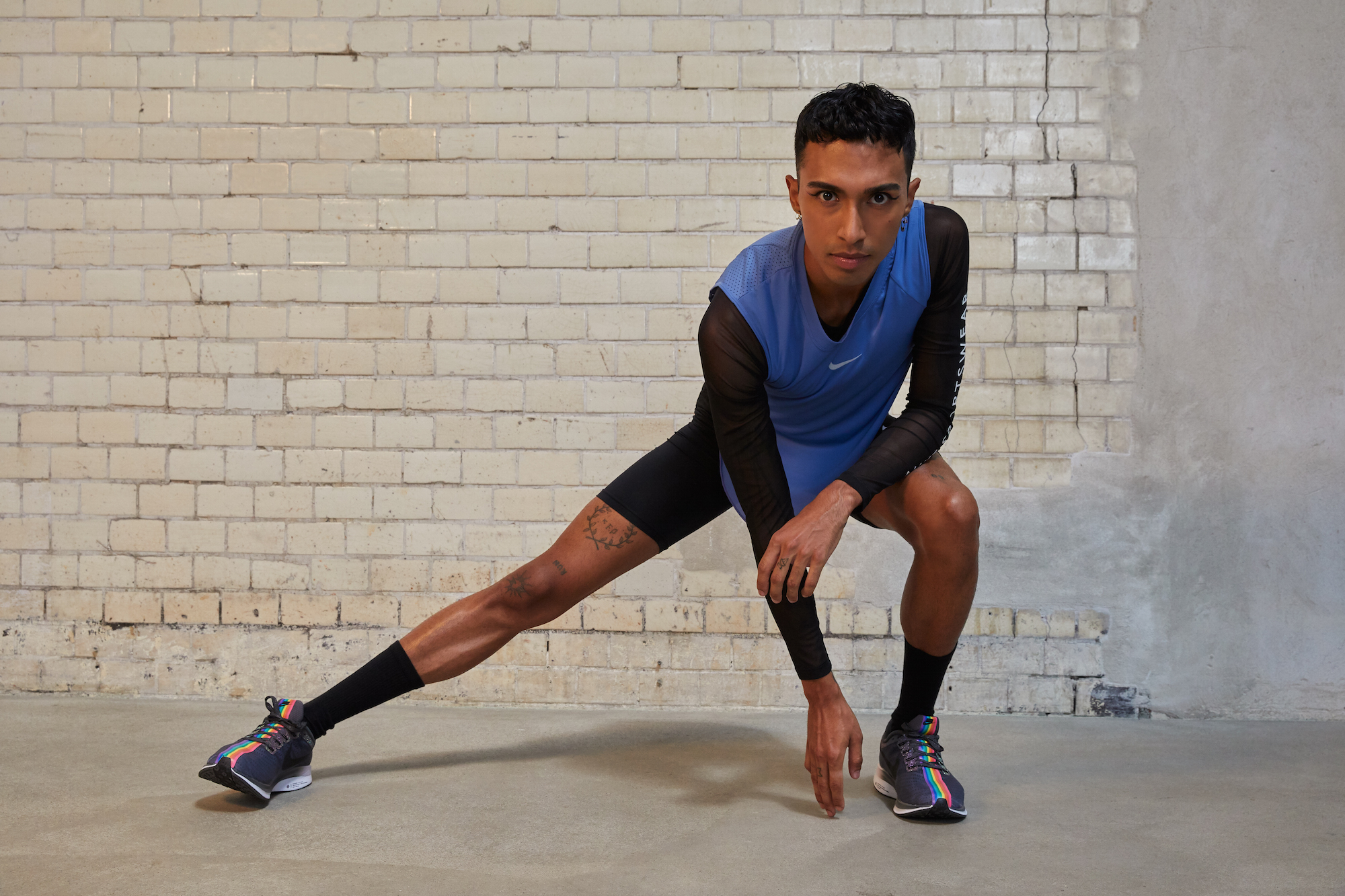 With Berlin’s CSD Pride celebrations just around the corner, INDIE has teamed up with Nike to spotlight the stories of some of the city’s most inspiring individuals—those who have harnessed the power of owning their own identity—in the hope to encourage others to do the same.

Daniel Marin Medina is a man of many talents. He’s made a name for himself as an artist, sketching evocative illustrations of everything from aliens to queer bodies; he’s an exceptional writer and now, he’s the co-founder of Wayv Run Kollektiv—a running club that seeks to make space for marginalised people and welcome them into the sport.

There’s a saying in Daniel’s native Colombia—’no des papaya’—which literally translates to ‘don’t give papaya’, but its deeper meaning guides Daniel’s attitude to life. “It says if you give people room to mess with you and they mess with you, that’s your fault,” he explains. “You gave them the room.” It’s been a long process, not without its hurdles (no pun intended—Daniel is more the marathon type), but Daniel has learned the power of visibility, and being true. “I was small, I was an immigrant, I was brown, I had tattoos, I was gay, there was a lot of room for people to mess with me,” he tells INDIE. “But if I didn’t give them that room, if from the second they met me, I was like, ‘hi, hello, Daniel, brown, queer, what do you want?’ Then they couldn’t and if they did, good luck to them.”

We caught up with Daniel to talk about struggles, safe spaces, and the ongoing quest to be true. 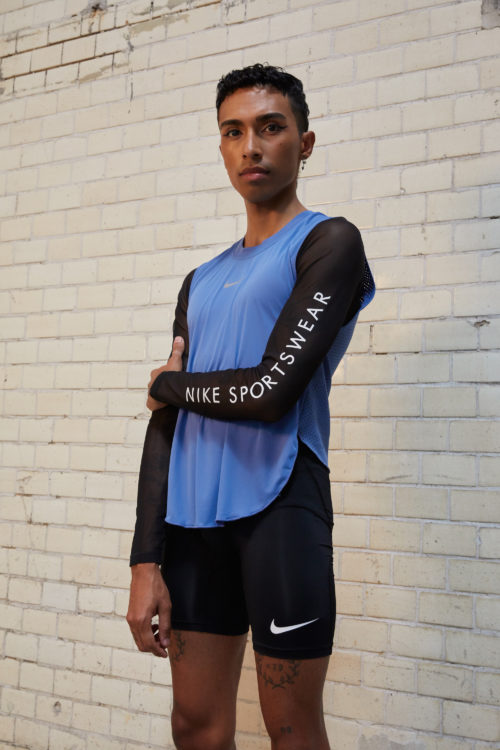 I am Daniel Marin Medina. I am an artist, a writer, a runner, a queer Latinx son of two Colombian parents who put their lives on pause to make sure that I had the best chance at success.

Why did you choose Berlin as your playground?

I think Berlin chose me. I had lived six years in New York at that point and things were comfortable, but not the right kind of comfortable. I had the jobs that I needed to have, I had a boyfriend who checked all the boxes—boring as hell, but it worked. And I saw myself, I could see myself three years in that same place doing the same things with the same people and it scared the crap out of me. I found that I got into the Berlin marathon. I got the nerve to visit. I visited for five days. It was cold as hell. I did not see the sun a single time, but it was incredible. I left on this plane with the lady speaking to me in German with my little airplane food and I’m like, this is it, this is the stuff. Those feelings carried me for the next couple months because from February to August, it all aligned, all of the stars aligned, and the universe conspired to bring me here for whatever reason. By August I packed my shit up into two bags and then came here. I have never cried as much as I have in these past few years. But I’ve also never run as much or drawn as much or written as much or danced as much. The city is a city of extremes, but it’s been very special to me. It’s been very welcoming. 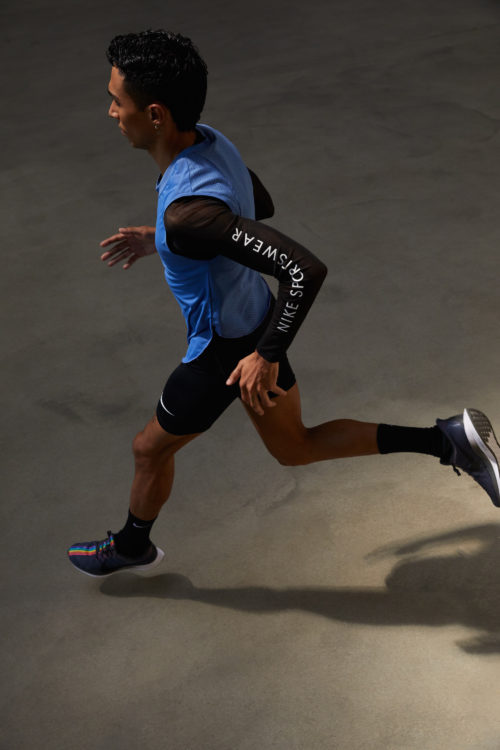 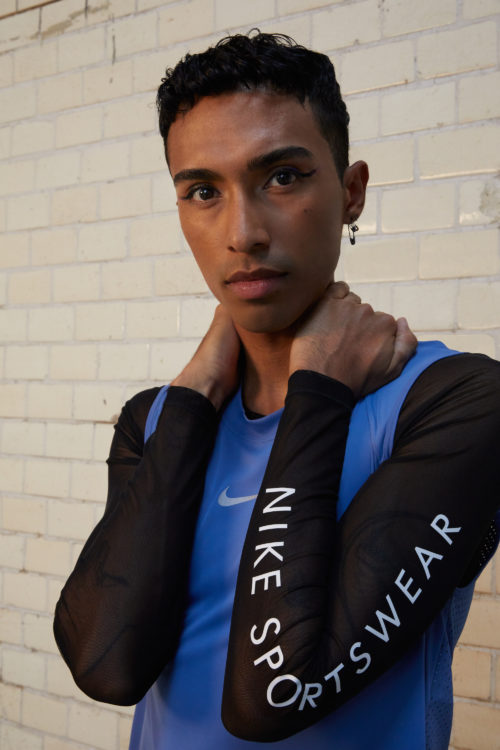 What’s been the biggest challenge in owning your own identity?

Being kind to myself. Being kind and being patient, allowing myself to be happy with where I was—knowing that there was always a chance to be better, but that I was right where I needed to be.

When do you still struggle?

Every day. Every single day. I think it’s the burden of marginalised people to struggle. I don’t ever get the privilege of getting to the end of the day without something chipping away at me. Someone looks at you funny, someone says, ‘oh, you speak English so well. Where are you from? Where are you really from?’ I don’t have those privileges and I don’t think very many other marginalised people do. But it’s those struggles that allow you to build bridges within those communities so that you can look at another marginalised person and just give them like a little nod and you both know what’s going on and you both know what’s happening. So, I struggle every day, whether externally or internally. It’s a daily occurrence. But that’s, that’s part of the process of choosing to live visibly and honestly and openly is that you’re going to be struggled with, you know?

You’re an artist and an athlete—in what way has your athletic mindset helped you?

In the way that it gave my sexuality power—at a time when a lot of young queer people don’t have agency in their sexuality. They’re sort of thrust into situations that aren’t the healthiest for them. Running allowed me to feel powerful in a body that otherwise was not perceived as powerful. I was skinny, I was small, I was brown—none of these things were powerful, but running in competition, I was able to succeed. That transferred into every part of my life. Despite how difficult everything got, I could pull back from those moments and running when things were really difficult and understand that I pushed past that I can push past this. 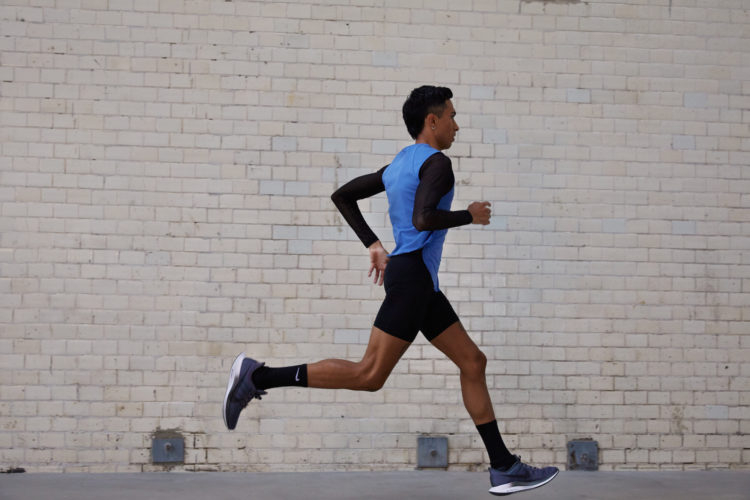 And what’s been your biggest support system besides that?

My parents. I didn’t trust them as much as I should have the beginning, but they were there 100% of the way, even when I thought that they weren’t. It was that knowledge that despite everything around me, I had support and love. I knew that I would be okay and then once I was able to allow that into my life, I saw that I was surrounded by love and support every part of the day, each day, no matter what. I always say that life has gifted me the best people. It just took a while for me to let them in, to be vocal and be visible and be true to myself. But it’s always been there. It’s always been there.

Was there a specific point in your life where things fell into place for you?

There was a point in my life where everything got very heavy, very dark and I turned to self-harm. I wasn’t using the outlets around me and I saw my life divided into two places. It was either it stopped, or I continued, and I did the best that I could. I chose the latter and I’m very happy that I did. But this thing of being good enough I think is a constant journey and if it ever has an end, I don’t want to get to that point. I think I’m someone who is perpetually unsatisfied—but in the positive sense. There’s always room to be better. There’s always room to grow, There’s always room to be kinder. I’m okay being on that journey. I think what has changed is the acceptance of being happy with where I am now. That’s what’s been important and it’s been a recent change. It only happened a couple of years ago.

What advice would you give to your teenage self?

Apart from just have better hairstyles, I’d tell myself to be patient—be patient and trust the people around you. Let them in. And that won’t happen unless you are vocal, and you are visible and you let them into those struggles and you are honest with yourself and with them. It was this thing of expecting people to help me without asking for help and that never works. So, if I could tell my teenage self-anything it’s be patient and be vocal and be honest, be true.

You already mentioned that there was dark time in your life. How old were you then?

I was 11 years old and it was a strange time in my life when my parents were getting divorced. It was a situation of everyone is looking at you, but no one’s really looking at you. Everyone’s making sure you’re fine, but no one’s asking are you, are you okay? It was around that time that my sexuality started to develop, and my desires started to become present. I saw that the desires I had were not the desires of those around me or the or the ones that people told me I should be having. It was all incredibly confusing, and I had nowhere to look to. The only thing I knew was to stay present, and it was not in the healthiest way, of course, but when I look back on it, it was just survival. I was trying to focus on the problems that I could focus on.

And what do you do now to stay present?

Right now, running is that same thing. Running is masochism. It’s poetic masochism for sure, but it’s what it is. It’s putting your body through pain to remind yourself, hey, you’re here, you’re alive, you’re thriving, you’re kicking, move forward. So those lessons that I learned when I was just like a little kid are still things that I practice today, in healthier ways, more productive ways, but all in an effort to stay very present.

Did you start running when you were 11?

Very shortly after, yeah. It wasn’t a very seamless switch, and I was not an athletic kid at all. I was terrible at running when I started, but I saw that the bodies of the people who are successful in the sport looked like mine, a different color, but they looked like mine. I grabbed onto that by all means possible and I pushed and I gave that sport everything—I got as fast as I could and I competed as hard as I could. And running and these cross country meets became this safe space for me to explore my sexuality and explore other men’s bodies under the guise of competition where it was okay to talk about another person’s body. It became an escape – it became the most beautiful escape that I had at the time. 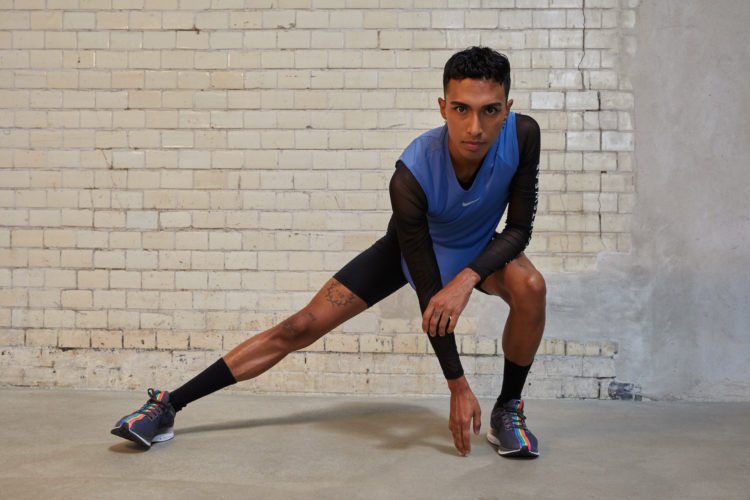 You’ve said that the best way to empower others is to be visible. Why is this so important?

The running community in particular is still very straight, white male. I am not that, nor will I ever be. So, I don’t just show up to a race and run, I show up to a race and embrace the politics of my body. I put a little pink triangle on my shorts and a little pink triangle on my singlets to let people know, ‘hey, you’re about to be beat by a rowdy homosexual who did not come here to play around.’ And that’s fun. And I enjoy being that person, but it takes energy. So where other people are focusing on just stretching, just warming up, getting the race done, I’m also worried about am I being visible? How are people looking at me? What does it mean that I am in the position that I am now? And then I also have to run, you know.

What’s your biggest aim with your running club, Wayv Kollektiv?

I have the highest of visions for Wayv Run Kollektiv. I co-founded Wayv with Huyen Ngyuyen and what we’re trying to do is make space for people who don’t yet have a space to compete. I want to create access for people who don’t yet have that entry point to running. For the Berlin half marathon, we brought 10 people to the race who otherwise would not have ran that race—we had transpeople and people of color and other underrepresented bodies, and it was so beautiful and incredible to see. And I felt like this like anxious dad, just after I finished like, oh my God, where are my people? That’s what it’s about.