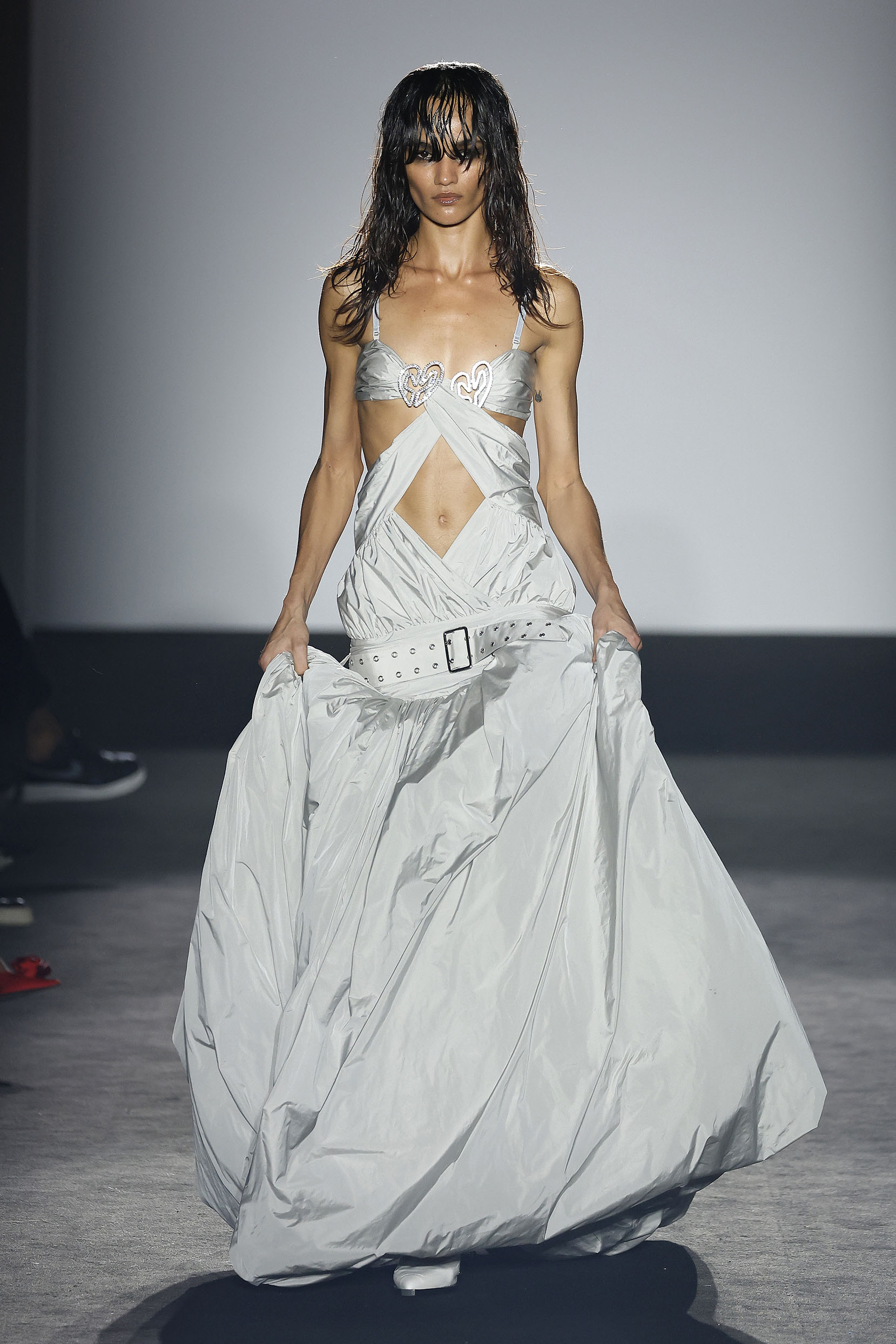 It may not be stacked among the heavyweights of Paris, Milan and London, but Barcelona has birthed enough esteemed designers to earn itself a firm place on the fashion map. As brands like Paloma Wool and Xevi Fernandez soar from the Catalonian capital to international acclaim, Barcelona—home of Gaudí design heritage and Miró’s abstract art—offers its own slower-paced and sustainabliity-focussed answer to outfitting the future.

Showcasing some of its emerging and established design talent is 080 Barcelona Fashion Week, which returned last week for its 30th edition. Presenting 23 different collections, the initiative spotlighted designers from across the breadth of Barcelona and beyond—and with it, pieces that ranged from bold to beautiful to bizarre.

Fronted by presenter, fashion-aficionado and former Barcelona babe LoveFoxy, INDIE took to the shows to run down the design hot-list.

Helmed by friends David Salvador and Javier Zunzunegui, Habey Club often looks for cultural references—books, films and beyond—to inspire its collections. Its SS23 offerings, however, were inspired by “unexpected family gatherings”, or more specifically, “impossible conversations until the wee small hours of the morning, the sharing of past memories, mentally blurred.” The result was a collection more sultry than most family gatherings, but extremely wearable and emotional, punctuated by crystal embroidery, evocative of cathartic tears.

In with the old, but make it new. 080 Reborn is the facet of 080 Barcelona Fashion Week breathing new life into old clothes. Sourcing second hand garments from textile waste sorting plants and vintage stores across Catalonia, this Waste Agency-supported endeavour is a reminder of the unique charm that comes with embracing pieces of the past for a more sustainable fashion future.

Established in 2019, Amlul’s track record goes back much further. Founder Gala González already had over a decade of industry experience when she launched her first solo brand—designing capsule collections for the likes of Superga, Dominguez and Mango. Amlul focusses on responsible consumption, with each garment created and produced within Spain from start to finish.

Architecture plays a key role in LARHHA’s garments—and not just in their structure. Both the brand’s Cordoba-born Creative Director, Miguel Marín, and Art Director Natalia Lorca worked as professional architects before transitioning into the fashion realm in 2019. The label’s latest collection explored the dichotomy between sophistication and sleaze, playing with different sartorial and cultural stereotypes. The result was an outlandish and eye-catching collection that took hats and shoulder pads to new heights.

Y2K meets Hajime Sorayama robotic futurism in the designs of Domingo Rodríguez Lázaro this season. With celeb approval from the likes of Lady Gaga, Beyoncé, Rosalía and Dua Lipa, Dominnico has earned a reputation for playful, maximalist designs that take its influences the extra mile. Low waists and high shine reigned supreme in this hotly anticipated collection.

Tíscar Espadas herself may be from Spain, but her brand was born in London, and the principles of British heritage tailoring is referenced in her work. The Madrid-born designer graduated from the RCA and was awarded with the Burberry Scholarship before founding her namesake brand in 2019. In the three years since, she’s earned a reputation for … Her latest collection “shows the frontier between the divine and the earthly, myths and humanity, spirituality, and reason.”

Born in 1992 in Seville, the brand’s designer, María Rodríguez Blanco earned recognition as a finalist in Vogue’s ‘Who’s On Next Award’, for her maximalist, tulle-tastic take on womenswear. And while Reveligion’s SS23 collection might be inspired by outsiders, solitude, and the desire to fit in, its indisputably maximalist offerings are characteristically about standing out.