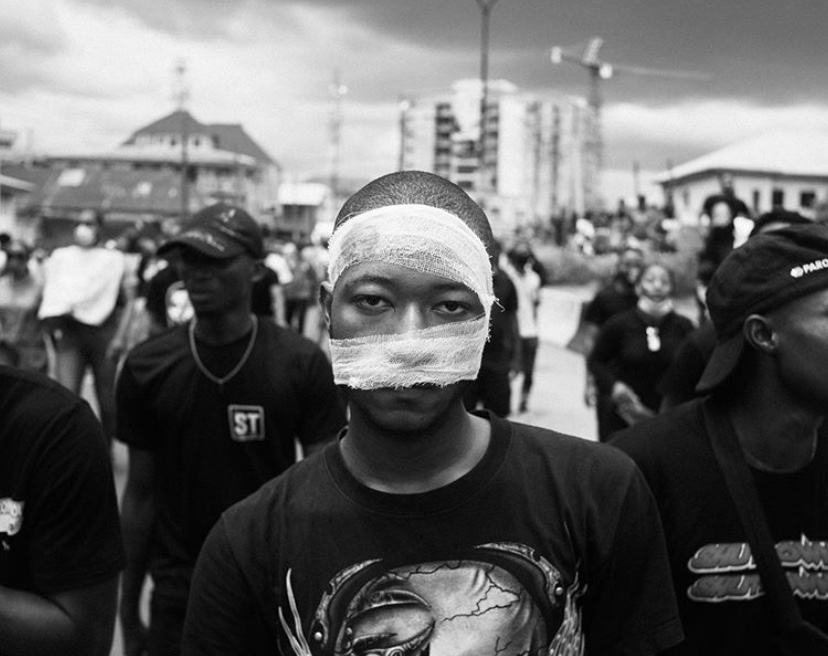 10 POWERFUL PHOTOS FROM THE #ENDSARS PROTESTS IN LAGOS

The events that unfolded at Lekki toll gate in Lagos last night were nothing short of a massacre. After two weeks of protests in the Nigerian capital calling to end the police brutality and disband the Special Anti-Robbery Squad (SARS), soldiers opened fire at unarmed youths who were out past the abruptly-announced 24 hour curfew that had been imposed earlier in the day. Witnesses say as many as 12 people have been killed and more wounded.

SARS, the police unit designed to control violent crime charge (and recently ‘rebranded’ as Special Weapons and Tactics Team, or SWAT) has a long history of abusing its power by profiling and targeting young people, carrying out unlawful detentions, arrests and unwarranted searches, driving unmarked cars, not wearing uniforms as well as violently attacking, raping, abducting and murdering civilians. The movement to #EndSARS began in 2017, but the government’s decision on 4 October to prohibit the unit from carrying out stop-and-searches and refocus it on violent crime—instead of completely eradicating it—sparked uproar which has continued every day since, and has seen peaceful protestors teargassed and police brutality continue.

I’m so angry at this. How do you announce a 24hr curfew at 11:49am in a state like Lagos with it’s peculiar gridlock situation?

If anyone gets hurt, arrested or missing while trying to get home, we know exactly who’s fault it is & we will continue to apply pressure. #EndSARS

Police brutality and corruption in Nigeria is a product of colonialism. The Nigeria Police was conceived in 1861 by the British colonisers who seized Lagos, and, as Binzak Azeez writes, was established “to utterly combat and repress all attempted resistance from Lagos communities against the colonial administrators.” To this day, Nigerian police uphold and enforce an elitist class system—as almost a third of all officers exist to serve and protect the upper echelons of Nigerian society, as opposed to performing normal police duties. Last year, a public survey found the police force to be the most corrupt institution in Nigeria. Very few cases of corruption and abuse at the hands of the police are investigated, and there is very little accountability from the Nigerian government.

Despite the government’s promises to scrap SARS and reform the police, many young protestors are sceptical “that SARS officers are being adopted into the police force without any accountability”, writes Emmanuel Akinwotu in The Guardian. As the battle to #EndSARS continues, we take a look at 10 powerful photographs capturing the fight for justice in Lagos.

At 7:30am, this morning at AdeKunle, Yaba, Ayanfe Olarinde writes “Lagos state police shooting at people in their spaces during the curfew. This angered the thugs, who immediately came out to defend themselves. 2 shot dead, a number of them injured.”

Kashope captures demonstrators calling for the end of police brutality. One child holds a sign which reads, “Politicians dey loot us, SARS dey kill us #EndSARS”

Obáyomi Anthony Ayòdélé captured ‘The Revolution Now’ protests held across Nigeria on the anniversary of its independence. “The same group of police men who arrested the 21 young men later arrive at this scene, but here they made no arrests but chose instead to dialogue with the protesters. The police men I spoke to here said they were only there to protect the masses, and there was no incidence of violence recorded throughout the duration of the protests.”

These photographs, taken on 16/10/2020 by Ayanfe Olarinde show protesters holding up candles in memory of those who lost their lives to police brutality.