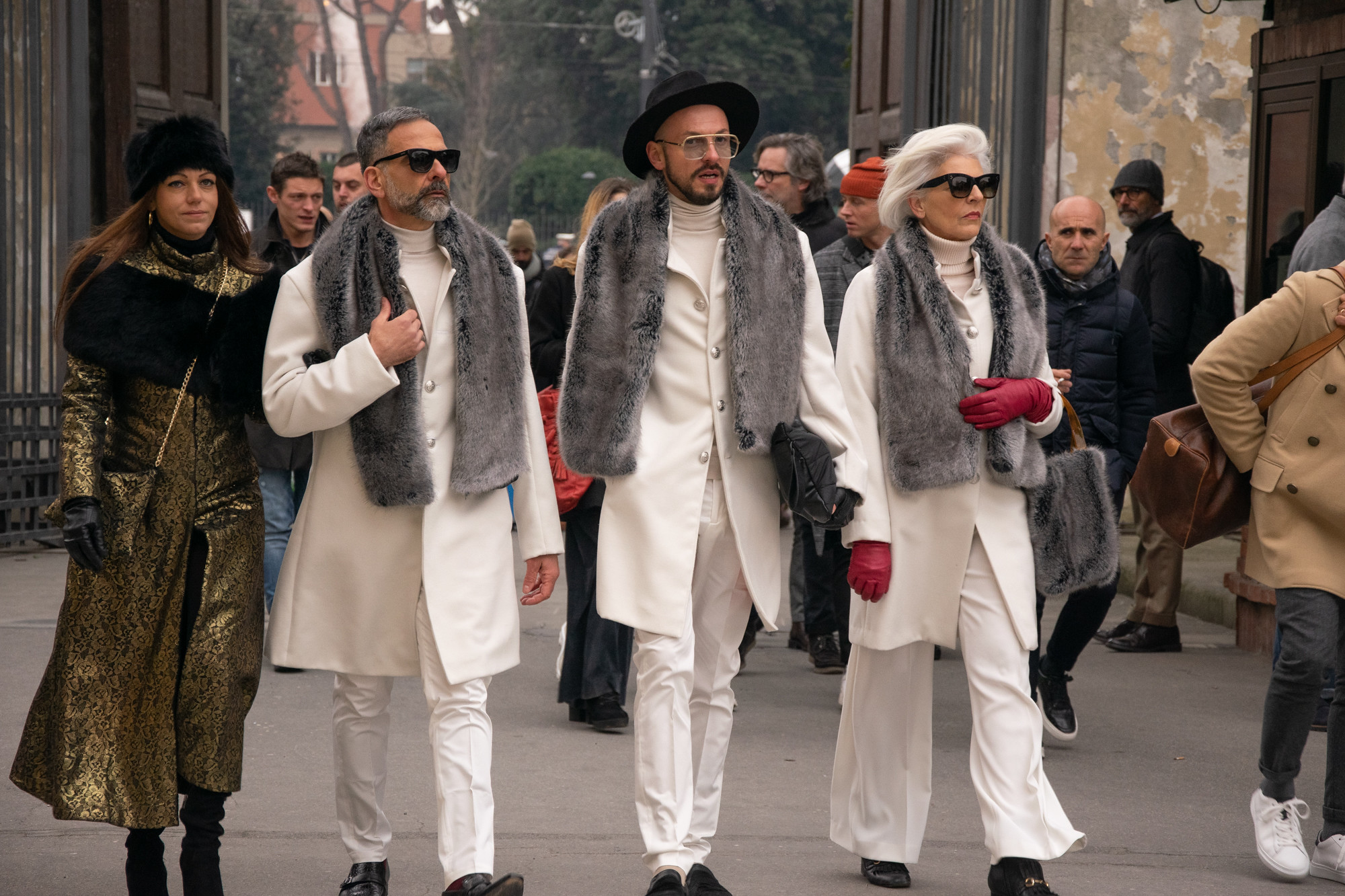 WHAT DO “TREND FORECASTERS” ACTUALLY DO?

Trend forecasters might be the closest equivalent we’ll get to real-life fortune tellers. From self-taught artist- entrepreneur to conglomerate consultancy, to the world’s most trusted colour investigator—we spoke to a cast of specialists to decipher the obscure nuances involved in trying to anticipate our commercial and cultural currents.

In 1994, artists Vitaly Jomar and Alexander Melamid commissioned a survey to find out what the American public deemed enjoyable, purpose-fulfilling art. With questions aiming to asses majority preferences in terms of size, colour, or style, the data collected would later be used to create a double-jointed art project. The People’s Choice. In it ‘America’s Most Wanted’ and ‘America’s Most Unwanted’ paintings were created—the former depicting a serene, lakeside landscape; the latter, an abstract cluster of multi-coloured, geometric shapes.

Despite being compilations of either the collectively favoured or abhorred characteristics, neither of the two canvases provoked the expected reactions, leaving spectators utterly confused instead. Not to say Komar and Melamid went into this seeking to please their audience, but it does make you wonder: What do the people want when what they say they want is not what they want?

For as long as fashion has existed beyond its utilitarian raison d’etre, companies have tried to make sense of precisely this question. Their answer: trends—collective inclinations towards a certain aesthetic, political movement, technological revelation or lifestyle, influencing what products consumers buy, where they buy them, and why. Hence, as one of the only categories of merchandise nearly every human being somehow interacts with, fashion can serve as a particularly insightful mirror to society and its inner stirrings.

Just think of ‘NORMCORE’. The term was coined in 2016 by former art collective, K-Hole, to describe times when subcultural referencing had reached a point of exhaustion. As period-specific-style resurgences felt uninspired and individualism had evolved into a thing of banality, ‘normcore’ virally resonated with a generation bored with exclusivity. It pointed out that if everyone tried to be distinctive and out-of-the-ordinary, no one is. These sentiments rang so familiar with the masses that the troop of 20-something-year-olds behind it swiftly became the most talk about and listed to voyeurists of contemporary consumerism.

“It began [in 2011] when we all had different beginner jobs, trying to support ourselves, while we also figured out how to be artists, writers, poets, designers,” Emily Segal, co-founder of K-Hole, remembers nearly a decade later. A friend interning at an advertising agency at the time began leaking official trend forecasting documents—”beguiling and well-designed PFDs describing the experience of young urban consumers,” she reminisces. “They had a lot of funny, made up worlds and emoticons and high-resolution photography. [We] found them to be hilarious and in, certain ways, more elaborate and information-rich than a lot of the artwork we saw our peers making.” So K-Hole began replicating, re-contextualising, and mocking their findings until the reached the credibility of actual trend forecasters by default. Despite being dissolved in 2015, K-Hole’s observations on coolness, (in-)difference, and adaptability made it into pop-cultural conscience, leading to heavyweight collaborations with the likes of Coach, MTV and MoMA PS1.

Nevertheless, Segal does not necessarily view herself as a trend forecaster. “It’s kind of an imaginary designation for a job, because different activities lead to and follow after it. It’s not like being a surgeon,” she says. “Not necessarily satire, not necessarily meant to be a serious piece of research in a business sense,” K-Hole was “aiming for fun, as a group of 22-year-olds.”

The collective definitely thrived off its guerilla allure. But Segal also drew on knowledge from her job at Wolff Olins, a consultancy specialised in strategy and design work around the concepts of corporate identity, granting her access to big-budgeted market analyses—the likes of which Jessica Distler, managing director of Boston Consulting Group’s Berlin site, browses through on a daily basis. With 90 offices in 5o countries and clients across all branches of trade, BCG is undoubtedly one of the world’s leaders in the titular discipline. Contrary to K-Hole’s more artistic pursuit, Distler’s definition of trend forecasting relies on more pragmatic, mathematical indicators. “The tools to digitally and numerically catch sight of potential trends are relatively new,” she points out. “But […] they can offer the most accurate, most logical arguments for or against a product.

By evaluating their clients’ data history, Distler and her team provide services in trend prognosis and research, product design, development, and retail. “You very well can and have to go into the past to understand what to do in the present to best be prepared for the future,” she insists, arguing that a big part of forecasting a trend depends on “knowledge in hindsight,” now often provided not by a human brain but by artificial intelligence.

“They unveil so-called ‘twins,’ similar products that ran successfully at different points along a timeline. It’s a lot more precise than the often-resorted-to gut-feeling attempt,” she says. Take a shoe for example; Distler would zoom in on all of its traits, from material to texture to size of the heel, and compare these with past models and how they performed. Referring to the ‘Pull Model,’ Distler brings up that more companies would pre-produce certain amounts of products and styles for their stores, and then drastically re- or de-stock according to how well each of them would fair in sales.

One label not emulating this approach at all, yet still a profiteer of unmatched success, is Supreme. Instead of focussing on ‘pulling’ pieces, they’ve mastered the art of the ‘drop’—releasing a limited number of products to astonishing consumer interest, thus “setting trends rather than abiding by them” Distler points out. So, however telling the data may be, the real key is to “know your audience very well to provide them with an experience that defies all borders of the product. An algorithm is only as potent as the data it is fed with,” she says. “But a designer’s work is always based on their intuitive recollection and integration of the climate around them, what they see and feel in society.”

The belief is shared by the Pantone Color Institute’s executive director, Leatrice Eiseman. “Because we understand the relationship between colour and culture, we are able to translate what we see happening in the future into the language of colour and trend,” she explains. For 20 years now, the Institute has been releasing annual reports on colours—upheld by the scientifically proven synergies between the human mind and its sensitive perception of colour.

“Because we understand the relationship between colour and culture, we are able to translate what we see happening in the future into the language of colour and trend, “

Pantone’s traveling team conducts its investigations by taking just about any somehow relevant occurrence, be it in politics or entertainment, into consideration “and then connecting the dots between the zillions of images,” Eiseman explains. “Environmental concerns and our need to decompress are two key factors influencing our attraction to greens, whereas our desire to eat and apply more organic ingredients results in an attractions to earthier, more muted and natural tones.

In an official comment on the Pantone’s colour of the year 2020, Eiseman blames an era of uncertainty and turmoil for our gravitation towards the awarded traditional tint of blue: “We are living in a time that requires trust and faith. It is this kind of constancy and confidence that is expressed by PANTONE 19-4052 Classic Blue, a solid and dependable blue hue we can always rely one.”

Pantone’s essential attribute is its skilful narration of content—which, in turn, strays not that far from K-Hole’s semi-cynical yet appealing manner of incorporating and impacting the world around them, blue-printing its societal framework. “Particularly for more culture-focussed inquiries, it’s not super dissimilar from developing a perspective or hypothesis that would be in an article or an essay,” Segal says. And a similar notion of creative autonomy is, according to Distler, also granted to more prestigious, high-end establishments, whose runway looks then inspire and are funneled into fast fashion suppliers’ collections.

To assume trend forecasts are the mere curation of buzzwordy mood boards and savvy euphemisms is quite unjust. And even though sometimes they admittedly reek of such, if they become too shapeshifty in their journey through storytelling mechanisms, their implications can hit uncomfortably close to home. Trends, in their most colloquial sense, and the exercise of being able to predict them have for long felt disguised and shrouded in ambivalence over reality versus simulation—freedom of opinion versus framing of opinion, through socioeconomic stimuli.

“There may have been a time in which trends were purposefully created from above and bestowed onto the public,” Distler says, but now consumers have “more power than ever before.” With The People’s Choice, Komar and Melamid were never concerned with whether or not people would actually like or dislike the artworks produced, they later said. Instead, they hoped their questionnaires’ results would provoke thoughts on free will, democracy and individuality. So, maybe, it’s not so much for us to persuade ourselves of the sincerity of trends or the forecasting of them, deny or obey, agree or disagree. Evidently serving as an echo to our singular and plural desires, maybe we should view trends and their signifiers that same way. It is, after all, the people’s choice to decide on what will or will not be that ‘next big thing.’