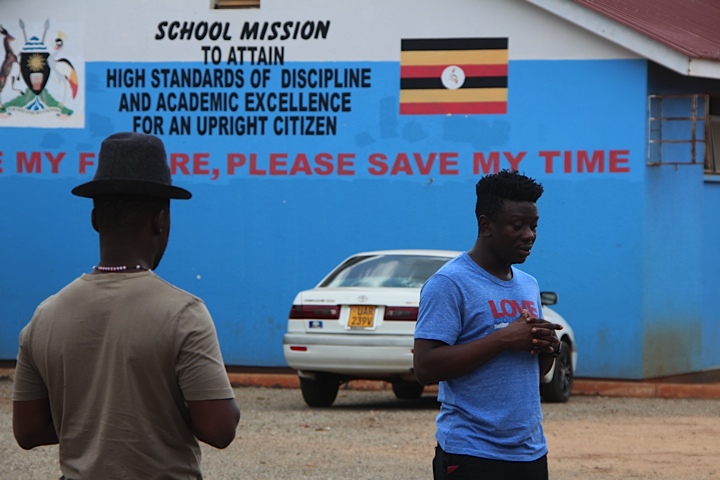 As the blame-game behind the coronavirus descends into wider discourse—with Trump insisting upon calling it the “Chinese virus”—another scary narrative being thrown into the mix is one that blames the LGBTQ+ community. Ugandan pastor, Oscar Bougardt—notorious for inflaming tremendous homophobic sentiment in his country—called the coronavirus “the wrath of god upon this wicked world”.

It was back in 2014—the same time the US was preparing for the legalisation of same-sex marriage—that in Kampala, Uganda, President Yoweri Museveni signed one of the most brutal anti-homosexuality bills in LGBTQ+ history. The bill, originally introduced by now-cabinet minister David Bahati in 2009, advocated for punishing a variety of same-sex acts, with varying degrees of punishment depending on the ‘severity’ of the acts. The bill made provision for a 14 year jail term for first time convictions, life imprisonment for ‘aggravated homosexuality’ (same sex acts conducted on minors, people with disabilities or by someone who is HIV+) as well as criminalising the recognition and/or promotion of homosexuality.

The legislation, which came to be known as the ‘Kill the Gays’ bill (because of its original clause to include capital punishment), gained international media attention with many countries including the Netherlands, Denmark, Sweden, Norway and eventually the USA imposing economic sanctions by withholding aid. Although the bill was eventually deemed unlawful by the Constitutional Court, life for members of the LGBTQ+ community in Uganda has never been the same. Since the introduction of the bill, hate crimes against the community have seen a sharp incline, with the government, police and media using any and all excuses to mistreat members of the community, including through the use of brutal force. 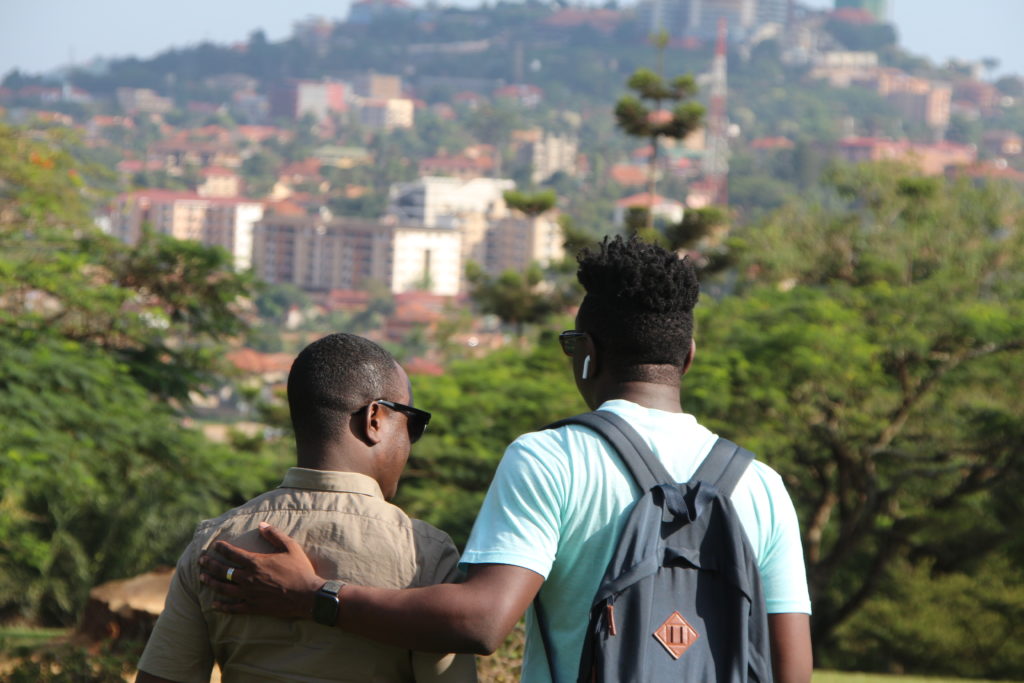 The immediate impact of COVID-19 is being felt by everyone around the world, but for some living in countries with authoritarian governments, the impact runs far deeper than simply coping with lockdown measures. For many leaders, COVID-19 is an opportunity to implement laws that might otherwise appear too repressive—the perfect scapegoat through which they can innact extremist ideologies. Unfortunately, for the LGBTQ+ community in Uganda, physical safety and mental wellbeing is under immediate threat. The government has been raiding shelters and arresting members of the community using their defiance of social distancing mandates as an excuse.

“We are always blamed for everything—from droughts to famines,” explains Richard Lusimbo, a prominent LGBTQ+ activist based in Kampala. “The fanatics thrive on fear. It is our job to share information and to remain steadfast in not having our voices silenced.”

Lusimbo is the director of research and documentation at non-profit organisation Sexual Minorities Uganda (SMUG). He works to better understand the trajectory of sexual rights (and their horrific violations) since the reversal of the Anti-Homosexuality bill as well as the situation on ground with COVID 19 today. He sums up his work as advocacy: “Advocating not only for fundamental human rights but also for healthcare and dignity of LGBTQ+ people in my country.”

Lusimbo’s work has been cut out for him since his very first day at SMUG, which he joined back in 2012 after graduating from university. “Today in Uganda we continue to function under the same draconian penal code from our colonial days, which criminalises consensual sex between same sex loving persons,” he explains. “Although the Anti-Homosexuality bill did not hold up, the lives of community members has been adversely affected for worse ever since,” he continues. It is common practice for community members to be thrown out of their home due to their sexual orientation, or to be denied basic healthcare by professionals for the same reason. Aside from the structural obstacles put in place to discourage normality for community members, physical violence is also on the rise. “Last August we saw 4 members of SMUG murdered,” Lusimbo explains, “Another 16 members, who had called the police for protection, were instead arrested.” Listening to Lusimbo list the atrocious crimes committed by the police, including the use of ‘anal testing’ measures feels like a fictional horror story, but these are the realities that threaten members of the community daily. 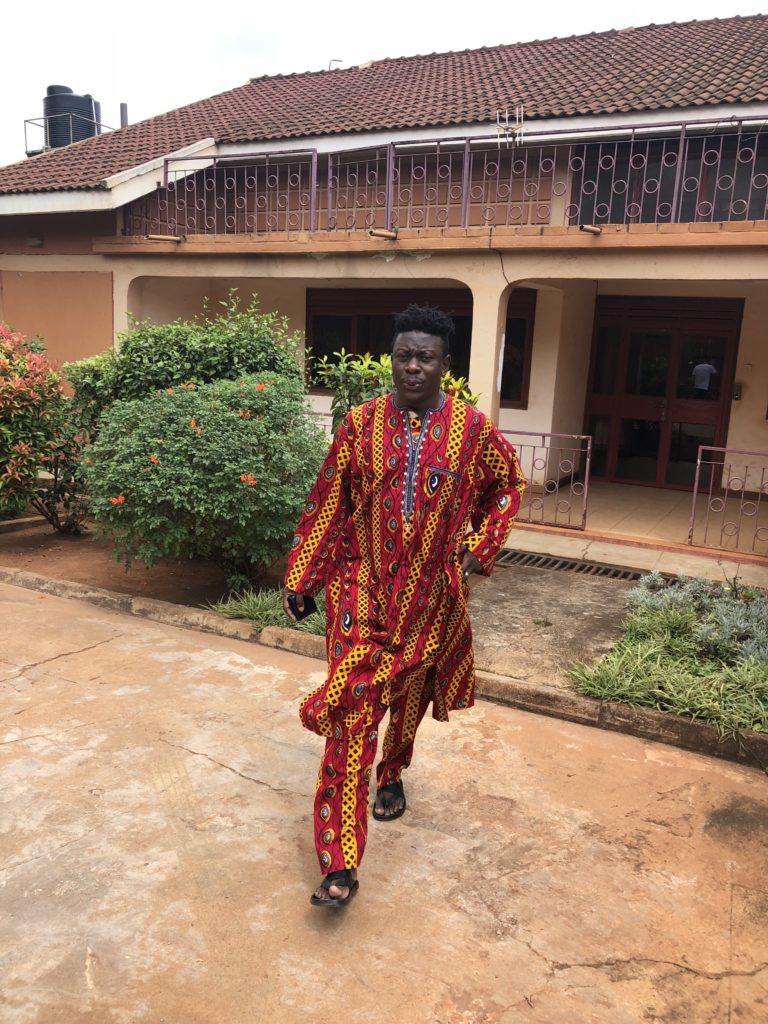 Of the human rights violations faced by LGBTQ+ people in Uganda, the right to privacy remains one of the most abused. Lusimbo—who has been exploring this topic since his university dissertation—dissects the intricate web of surveillance (including unofficial neighbourhood watch dogs and digital spying) community members must stay wary of.

“We have seen everything from media channels and tabloids parading personal information on their platforms to family members reading private text messages and snooping on their own children/siblings,” he explains. “In the health sector too, we have seen community members being shamed and snubbed away because of their sexual orientation.”

With no ‘safe-space’ on offer, Lusimbo and SMUG have made it their mission to educate community members on ensuring their own safety. “We work with our partners, through social media campaigns, on teaching our community to proactively protect themselves, so they are not left vulnerable or exposed,” he tells me. “We ask members to think about where they are posting their information, their pictures etc., as it is very easy for this to reach the wrong hands.” In a time when the LGBTQ+ community in the West is pushing for gay pride and demanding—rightfully— to have their voices heard, Ugandan community members are left entirely to their own defences. 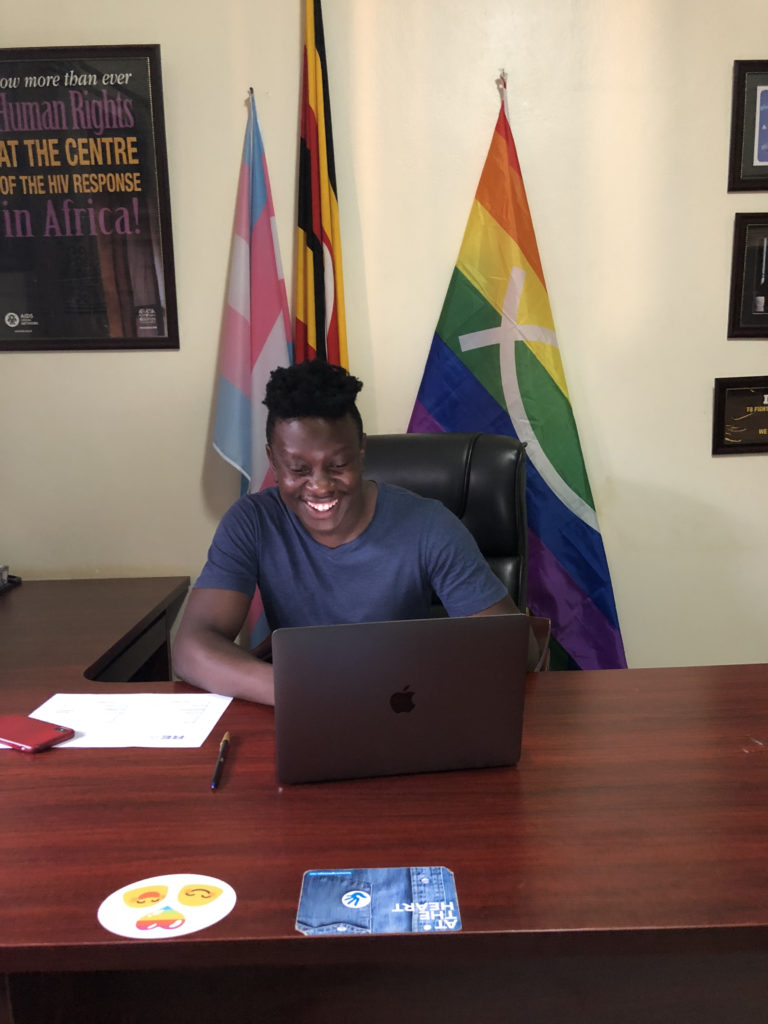 COVID-19 lockdown measures have only made matters worse. “LGBTQ+ people who have had to return home to quarantine with their homophobic families are under tremendous emotional stress with no access to pyscho-socio support,” Lusimbo explains. “People have to stay in the same perimeter as the community that they intentionally left—it’s very traumatic.”

On March 19th, a shelter on the outskirts of Kampala was raided and 19 people were arrested on the grounds of disobeying social distancing rules and risking the spread of the disease. Police spokesperson Patrick Onyango justified the actions by stating the “congesting in a school-like dormitory within a small house” was in clear defiance of lockdown laws. “The people have been arrested on no clear grounds and now they can not even be released until lockdown measures are lifted,” says Lusimbo. “We see another situation in which homophobic people take advantage and deny LGBTQ+ people basic rights.”

Aside from a lack of mental health support, lockdown also means limitations in accessing basic healthcare provisions. There are still no cars allowed on the road. SMUG are working with service providers and peers  to facilitate door-to-door delivery of medications, But it is a huge challenge. “We simply can’t reach everyone,” Lusimbo explains, “and a lot of people are suffering without this aid.” Despite the obstacles faced, the organisation is working hard to find creative solutions to reach its members and ensure they do not feel alienated or helpless. SMUG has been offering online classes—although not everyone has immediate access to the internet or sufficient air time to conduct calls—and counselling through text messages to help its community members in these tough times.

As we begin to (hopefully) encroach upon the other side of lockdown—with measures being cautiously lifted in parts of Europe, China and Southeast Asia—Lusimbo informs me that his team and him are urgently focused on the next steps. On May 18th, the 19 community members who were wrongfully convicted have been released on court orders, after their initial court date continued to be delayed due to corona. Although it is an important success for SMUG, their work here is not done. When asked what other goals the organisation is working towards he says, “we need to now look at how to re-adjust and redesign our entire programme because life might not be the same due to the pandemic.” Our current health crisis presents Lusimbo and the organisation with many new obstacles in the near future, but their (seemingly endless) passion and perseverance will hopefully pave a path to a brighter, safer space for members of their community.