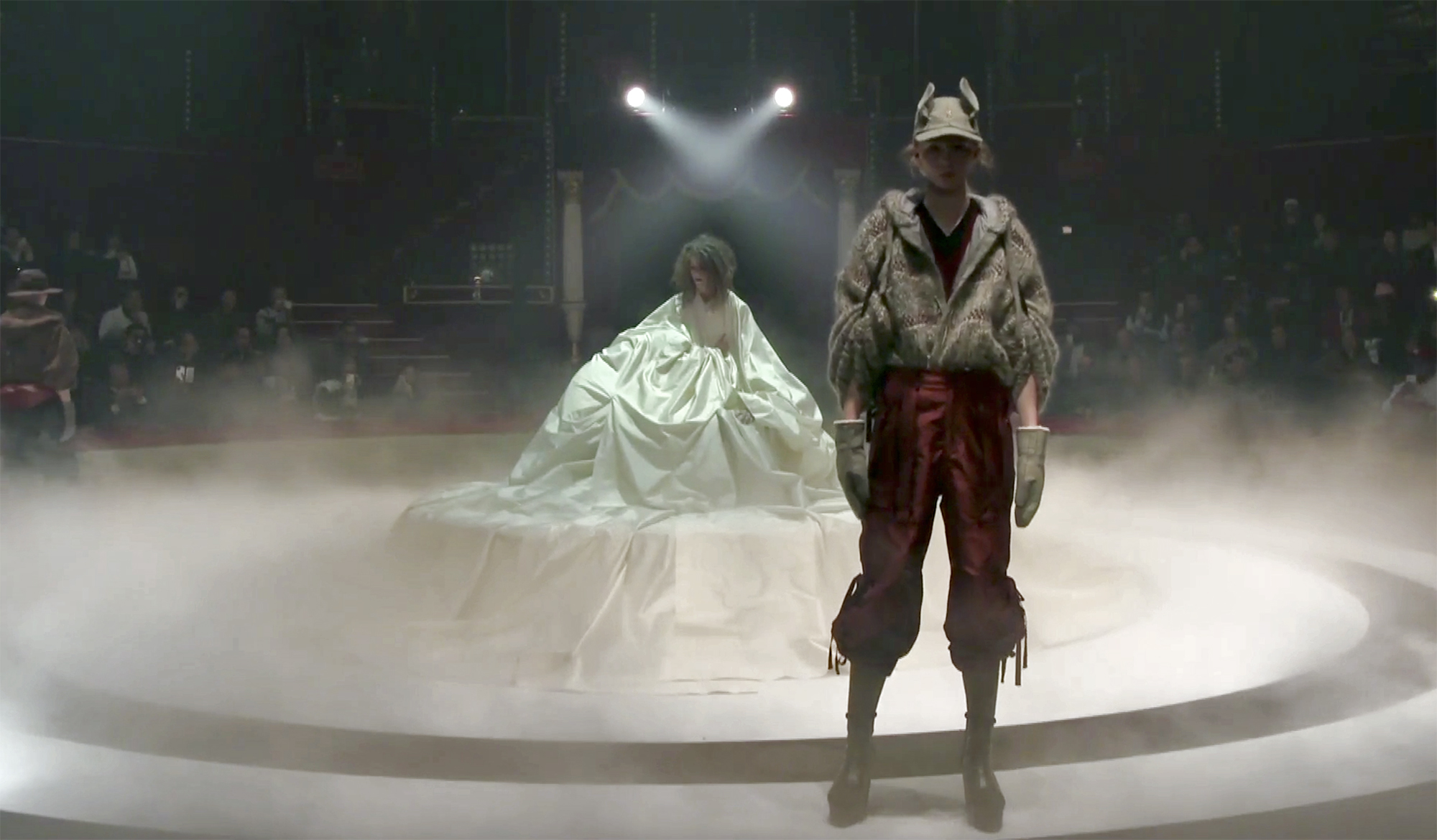 FORGET FASHION, THESE WERE THE BEST-DRESSED SETS OF PFW MEN’S

Last week, France’s capital was once again flooded with designers, models, celebrities, influencers, and fashion enthusiasts as they gathered to celebrate the men’s instalment of this season’s Paris Fashion Week. And just as impressive as the garments that swept the runways were the runways themselves—with audiences being blown away by the unique the artistry showcased by many of the set designers. Louis Vuitton went sky-high, complete with molten IRL face filters by Issamaya Ffrench, and Off-White opened with a tap dance, but these are our four favourite above-and-beyond sets that merged fashion, performance and metaphor; evolving the classic catwalk and bringing the audience into the minds of the designers.

Guests that attended Y/Project’s show were greeted inside a gymnasium with what resembled a massive ball-pit filled with thousands of red balloons. Though the spectacle was a bit of a WTF move in an era of single-use plastic shame,Y/Project’s Creative Director, Glenn Martens, explained the concept behind the bold staging, “[it’s] really to celebrate a little bit of the identity or the essence of fashion, because in the end, everyone takes themselves too seriously.” Serving also as a tribute to Marten’s youth, his playful vision was realised by Studio Dennis Vanderbroeck—the raised runway acted as the structure’s four walls—and the  guests were made to enter the pit and dig through the thousands of red balloons to find their place.

Blurring the lines between runway show and performance art, Jun Takahashi captivated his guests with an intricately devised production divided by three conceptual dance sections. Takahashi took inspiration from Throne of Blood, Akira Kurosawa’s 1957 version of Macbeth, with clear references to Japan’s feudal era in both the garments and the performance itself. “Because of my ancestors, the Japanese subject is difficult to approach,” the designer explained after the show—it’s worth noting that this is Takahashi’s first time drawing inspiration from his cultural heritage. With the help of choreographer Damien Jalet, Undercover provided a thought-provoking show that stands as a highlight for the season so far.

Dior Homme creative director Kim Jones debuted his Fall/Winter collection as a tribute to the late Judy Blame, a month before the second anniversary of his death. “It’s things Judy would have loved,” Jones said about the show. “I was sort of looking at it through his eyes.” Held in a massive tent on Place de la Concorde, the Dior Homme show was centred around impressive glass boxes standing tall on the runway. As the lights dimmed, and the first look was sent onto the runway, smoke filled the glass, as vivid coloured light served a dramatic backdrop to the neutral tones of the collection.

This year, Jacquemus proved to be an antithesis to the increasingly popular performative shows provided by the likes of Virgil Abloh and Jun Takahashi. With a truly maximum display of minimalism, Jacquemus introduced his Fall/Winter collection in Paris on an impressively vast, white floor, 15km outside the centre of Paris and reminiscent of an Olympic iceskating rink, with guests surrounding the arena atop bleachers. The set was stripped down to the absolute bare minimum, essentially transforming the massive space into a spotlight and removing any distractions from the real stars of the show—the garments and the high-profile models, such as the Hadid sisters. The blank area urged the audience to focus on Jacquemus’ designs rather than theatre and decor, whilst still exhibiting a powerful aesthetic that complements the minimalism of the collection.