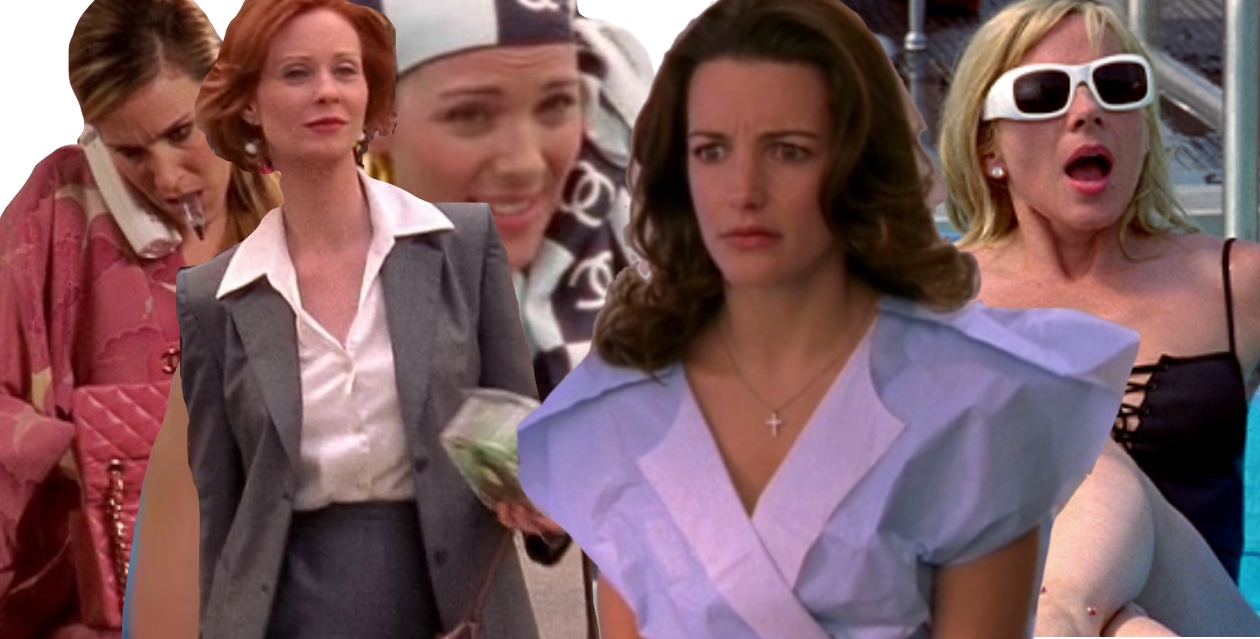 It’s been over 20 years since its initial release and HBO’s Sex and the City has aged—badly. But while its casual racism, gay stereotypes and tired gender roles might be harder to swallow than Carrie Bradshaw’s sickeningly unrealistic lifestyle and unrelenting rhetorical questions, one thing that transcends its dreadfully dated narrative is its style. From Galliano’s ’90s newspaper dress to power suits aplenty, if SATC’s 30-something New Yorkers knew anything it was how to dress—and the duo behind IG archive @everyoutfitonsatc are dedicated to keeping the fashion alive, one post at a time. With their new book, We Should All Be Mirandas out now, we asked ex-Parsons fashion students Chelsea Fairless and Lauren Garroni about everything from Mirandaphobia to Carrie-normalism, and the cultural legacy that Sex and the City leaves behind.

Which SATC character has the best style—and is there one look in particular that stands out?

CHELSEA: In retrospect, I like Samantha’s style the best. I like the flamboyance of it. My favourite look is probably the punk look where she has a “J’Adore Dior” headscarf and dangling earrings that vaguely resembles safety pins. It reminds me of the Zandra Rhodes punk collection.

LAUREN: I’m ride or die with Carrie because I love a feather accent piece. For me, my favourite look from the show is from season four, when she wears a Chloé equestrian silk coat over a tulle petticoat and ugly nude bra. This look is peak Patricia Field styling. Lots of the designs worn on the show, such as the Dior saddle bag and the Fendi baguette, are having a bit of a renaissance today.

Besides the things that are still on trend today, what/who would the girls be wearing if the show were running?

CHELSEA: I think Gucci and Balenciaga would be vital to the show if it was on today. I would like to see Miranda in The Row. And I’m sure that Carrie would love those square-toe Bottega Veneta sandals that everyone is wearing.

LAUREN: I think Carrie would (finally) learn how to use the internet so she could order Adam Lippes and Simone Rocha on Moda Operandi. Miranda would be in heaven with the accession of athleisure as high fashion. Charlotte would stan Victoria Beckham. And I think Samantha would still be wearing vintage Mugler because that never goes out of style.

Aside from being hilarious, #WokeCharlotte casts a light on the many problematic aspects of Sex and the City. If there were to be a reboot of SATC, what changes would you want to see?

CHELSEA: The Sex and the City of the ’90s would never fly today—can you imagine how many Medium think pieces we would have to read about it? The cast would certainly have to be more racially diverse—this is a show about New York City, after all. I would also like to see more diverse depictions of sexuality on the show. With actual queer people cast in those roles.

LAUREN: Hard agree. I’d also add financial diversity as well. Someone who can’t do three rounds of $15 Cosmos because they’re trying to climb out of credit card debt and college loans. Also since the show went off the air, there has been a mass exodus of creatives and fashion types to the West Coast. So if SATC existed today it would take place in Los Angeles.

As fellow writers, do you have any thoughts on how Carrie was financing her luxe lifestyle working as a newspaper columnist?

CHELSEA: To live that life now, she’d have to have a trust fund or be doing some form of sex work.

LAUREN: I mean how much better would season one have been if Carrie revealed she was a sugar baby?

What is the best and worst quality of each of the SATC women?

CHELSEA: I love Miranda’s intelligence, Carrie’s joie de vivre, Charlotte’s optimism, and Samantha’s refusal to conform to archaic societal norms. As for their worst qualities, Carrie is self-involved, Charlotte *might* be a Republican, Miranda dumped Robert for Steve, and Samantha works in PR.

LAUREN: I think their best qualities can also be their worst. I admire Miranda’s perseverance, but dislike her need to always be right. I enjoy Carrie’s romantic worldview, but can’t stand when it makes her needy and selfish. I love Charlotte’s sunny disposition, but her pollyannish outlook can be grating. And I wish I had Samantha’s confidence, but don’t care for her self-involved nature.

You seem to have a very keen knowledge of fashion and fashion history—do you have a fashion background or is it self-taught?

CHELSEA: I studied fashion at Parsons, although I learned more about fashion history from reading old issues of Vogue in the library than I did in my classes. I was obsessed with fashion when I was younger, now I’m a bit bored by it.

LAUREN: We actually met while studying fashion at Parsons. However we spent our teen years obsessing over every new collection, learning everything we could about designers. So we have a reserve of late 90’s, early 00’s fashion knowledge, that before the account, we had no place to channel it.

Let’s talk about what you have referred to as “Mirandaphobia”. What is it and did you ever have to face it yourself?

LAUREN: For better or worse we live in a Carrie-normative culture. One that does not value the trademark characteristics of a Miranda—blunt, sarcastic, and career-focused. While some are born Mirandas, for most it’s something you age into. I almost broke up with a boyfriend in college because he compared me to Miranda. He was right, but it’s not something you want to hear when you’re wearing a giant-rosette and heels on a cobblestone street.

CHELSEA: I grew up in a rural area and I coveted Carrie’s chic, metropolitan existence. I wanted to be the it-girl, not the corporate lawyer who wears adult braces. Although now I understand that Miranda is actually the most aspirational character. But when I was younger, I fought against the part of myself that was awkward and unglamorous. Now I accept who I am.

What are some Miranda qualities that you think everyone should embody?

CHELSEA: Her intelligence and assertiveness.

LAUREN: Her pragmatism and middle distrust of the world.

You organised a fundraiser for the Cynthia Nixon campaign and designed the official campaign merchandise—how did you get involved in that?

CHELSEA: Her team approached us, which was beyond surreal. They asked us to pitch ideas, so we pitched the merch, a fundraising event, and a campaign video featuring John Early. They said yes to everything, we were shocked!

LAUREN: We had an idea that Cynthia at least knew of the account because Kristin Davis messaged us once saying we hadn’t lived until we heard Cynthia read our captions. But we never expected that her team would reach out to collaborate on her campaign.

Who would Miranda be voting for in the upcoming primaries?

CHELSEA: Elizabeth Warren, who is an iconic Miranda herself.

There were plenty of them, but who was the biggest asshole that the women dated on the show and why?

CHELSEA: Will Arnett, who played the guy that Miranda dated that was into public sex. He staged a scenario where his parents walked in on them! That has to constitute some kind of sex crime…

LAUREN: Berger. He was a whiny beta-bro with toxic energy who resented that Carrie was more successful than him, and broke up with her on a Post-it!

How close are you to actually documenting every outfit on the show and what comes next?

CHELSEA: Oh God, we have so many outfits to go. We’ve barely gotten into the second film….

LAUREN: And we keep forgetting about the fifth season, which was shorter because SJP was pregnant. There are some interesting sartorial choices that need to be unpacked.