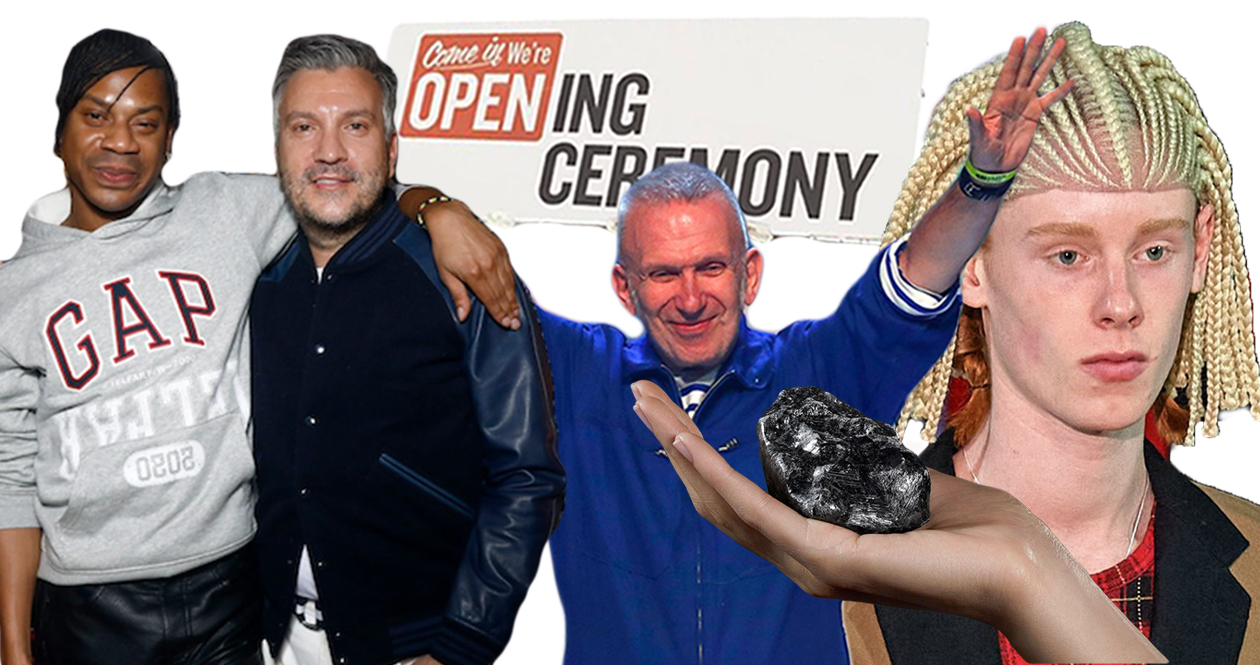 In the week that gave us Trump’s impeachment trial, another epic Greta Thunberg speech and the well-awaited return of Sex Education, fashion gave us Paris Fashion Week Men’s.  Along with it came gossip, glamour and grandeur, but between Kate Moss and Mike Tyson lookalikes strutting the Vetements runway, and Paul Smith celebrating half a century in the industry, it can be hard to keep up. Courtesy of INDIE, here’s a roundup of what you may have missed this week.

In a bittersweet tribute to his career, Jean Paul Gaultier presented an unforgettable show that sadly marks his farewell to the industry. Held within Paris’ Théâtre du Châtelet, Gaultier’s esteemed guests were gifted with a spectacular concluding show—complete with an orchestra and a closing performance from Boy George. A diverse cast of models from over the decades paraded Gaultier’s final collection to the star-studded audience—the show was an extravagant accolade to an equally extravagant career—with the likes of Dita von Teese and Irina Shayk showing off reworked versions of Madonna’s iconic cone bra corset. Conical motifs were sprinkled throughout the show, notably atop a black coffin which was walked down the runway as a nod to the end of his career… or so we thought, until Mexican model Issa Lish emerged from the coffin wearing a frilled, puff-sleeve white dress—foreshadowing Gaultier’s comment later in the evening that “couture is not dead.”

In an effort to step away from multi-brand retail, Opening Ceremony will be—ironically enough—closing their stores. The cult-favourite brand and retailer will be shutting shop in New York, LA and Japan throughout 2020 after being bought by New Guards Group, which is owned by Farfetch—who also acquired other major streetwear brands like Off-White and Heron Preston. All is not lost though, as there are plans to move the brand’s in-house production to Milan, and shift their online store to Farfetch—and it sounds like they have plans to open up shop again in the future. The founders stated in a lengthy Instagram announcement that “with our constant desire to reinvent, we will return to creating stores, but with a different mindset and perspective in order to wow people who are self-proclaimed shop-til-we-drops like us.”

The label only entered the fine jewellery market in 2012, but it looks like Louis Vuitton has plans to step up their jewellery game after purchasing the world’s second largest diamond in history. “Nobody expects us to put such an emphasis on high jewellery,“ Louis Vuitton CEO Michael Burke told the New York Times, “I think it will spice things up a bit, wake up the industry.” The 1,758 carat rough diamond is about the size of a tennis ball and was retrieved from a mine in Botswana last April by Lucara Diamond Corp. The Canadian mining company named it “Sewelô” which translates to “rare find” in Setswana. Dying to know how much the luxury label paid for the rarity? That secret is safe with Burke, who declined to reveal the price, stating only that it was “in the millions.”

Dear all, My inspiration for the comme des garçons show was Egyptian prince A Look i found truly beautiful and inspirational. A look that was an hommage. Never was it my intention to hurt or offend anyone , ever. If I did I deeply apologize. ❤️ Julien d’Ys

Comme des Garçons came under fire once again this week—this time for cultural appropriation following their Paris Fashion Week Men’s show, which saw white models donning ill-fitting cornrow wigs. The Japanese label is no stranger to this kind of controversy, after it was proposed by many that there was a severe lack of black representation during campaigns and shows since Rei Kawakubo conceived the company in Tokyo 50 years ago. Although reparations were made in 2018 surrounding the lack of black models, it’s back to square one for Comme des Garçons following their show in Paris last week. Hairstylist Julien d’Ys issued an apology on Instagram, claiming he had taken inspiration from the aesthetic of an “Egyptian prince”, and that the look “was a homage”. The high fashion industry is no stranger to controversy—especially in the realm of racism and cultural appropriation—and in 2020, is ignorance still really plausible?

For the first time in history, high street fashion has crept into the realms of Paris Fashion Week. This is previously unheard of, but thanks to a collaboration between Telfar and Gap, we are seeing a high street name in Paris this season. Telfar’s ideology as a label is centred around being accessible to everyone—regardless of race, gender or class—naturally, the designer would want to bring an aura of accessibility to an otherwise exclusive event such as Fashion Week. Telfar claims he has been interested in collaborating due to the “shared philosophy of accessibility, democracy and a wardrobe rooted in universal basics and affordable garments that can be worn in unique ways.” To celebrate the collaboration, Gap on Rue Tronchet evolved into a three-storey party, which was described by Vogue as an “after-hours underground club”, with the likes of Kate Moss, Honey Dijon and Dev Hynes in attendance for the pioneering Fashion Week event.