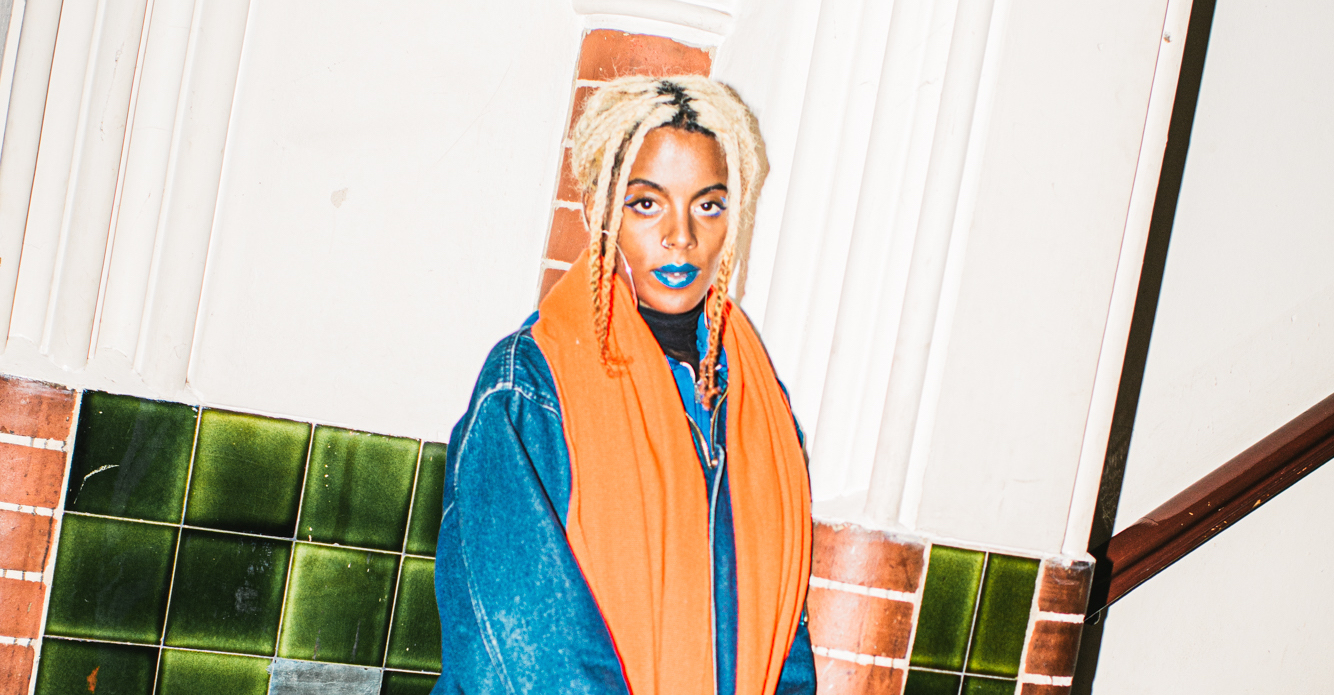 Juliana Huxtable is the definition of a modern day Renaissance woman. She is a provocative and published writer, an internationally recognised artist who effortlessly transgresses mediums, an infamous New York nightlife icon with a gender queer club night to her name, and a radical voice to be reckoned with in today’s hostile political environment. And that’s just the tip of the iceberg. She’s seamlessly integrated herself into multiple industries, just as easily found throwing down a set at an underground rave in New York or Berlin or mingling with the art world elite, all while leading today’s discourse on gender, race, and sexuality and championing voices that are often silenced. Her work requires looking beyond the aesthetic as it explores alternate histories, personal truths, and gender and race theory, posing complicated questions. But what is art without a challenge?

To view Huxtable’s work is just one window into her complex and multifaceted world, but to hear her speak on it is an eye opening experience. Her eloquence and steadfast conviction makes it easy to see why she’s one of the most dynamic contemporary artists. INDIE was lucky enough to attend her artist spotlight at Berlin’s DICE Conference + Festival and speak with her afterwards about her artistic development, challenging the banalities of the art world, and the demise of Tumblr.

You are a DJ, writer, poet, party promoter, model and activist, amongst what I’m assuming are many more skills and talents. What is the best thing about being a multidisciplinary artist?

For me I guess I can be true to the idea, and form never really impedes me—I don’t ever feel limited by that. I guess sometimes there are things that I have to learn about for the purpose of getting it done but I feel like I have the freedom to think about ideas really freely, and then how they come out, is just how they come out.

Did you start out studying one specific medium? How did you branch out into so many more?

I wanted to be a painter, so the classes that I took were painting classes. Well, I totally just didn’t pick up a paintbrush after my sophomore year. So sometimes I’ll bring painting in, like I’ll paint over stuff but I just gave that up. Now it’s just like, oh for this project I’ll use photography, for this one I’ll use painting, it’s just one of the many tools at my disposal.

Is there a specific art form that you’re gravitating more towards at the moment? Does this change from time to time?

I think that always changes. The show I just finished was self portraits, which I hadn’t done in a while, but I’ve been moving back towards them this past year. And now I’ve been making these wallpaper patterns, but those are the things that were in my past show.

HIII I HAVE A BOOTH OF NEW WORKS WITH @projectnativeinformant AT ART BASEL HONG KONG in DISCOVERIES… COME SEE ABOUT YA GURL IF YOURE AROUND!!!!

Do you anticipate these changes in medium, or are they are a reaction to certain things happening in your life or in the world?

I usually just go with the flow. For me, all of my ideas are born through writing—it’s the most immediate way that I process concepts. What it becomes is allowed to be responsive to anything. For example, I hadn’t done self portraits in a while because I don’t like the current economy surrounding visibility and the fetish around non-normative bodies and I didn’t want to participate in that for a period of time, but then I came back to it. Sometimes it’s just formal interest, for example I’ve never done anything with sculpture, or at least not since high school, so at some point I’ll probably want to dabble in that.

What has been the role of nightlife in your personal and professional development?

I guess it’s where I get my sense of community. I think for me, I probably directly replaced going to church with it, coming from a conservative town in Texas. I liked going to church, it wasn’t something that I was antagonistic towards. The tenets of organised religion themselves I’m generally opposed to and I don’t believe in a conscious, animated, human-like god, but the purpose that church served—as a space of collective release and unification, music forming and allegory, and passing down weird traditions—I think I directly replaced church with the club for those purposes. I think that’s the function that it serves. You can’t really call it a practice but I think it’s more that I see myself and see myself in others and you can release.

Your club night in New York is called Shock Value and some of your work and writing is very explicit. What is the importance of shock value or provocation to your work, or to get a message across?

I first called the party Shock Value, because, although for me what I was doing didn’t really qualify as ‘shocking’, I guess at the time the way that I was booking things, or the people that were playing together, were seen as having shock value. To me it made perfect sense that these artists should be playing alongside each other but the response from lots of people to my events was, “oh, that’s a weird choice to put those people together.” I was intentionally trying to merge scenes and genres that I thought would have an interesting affiliation. I also say “shock value” all the time. It’s a phrase that I use so everyone already had that phrase associated with me. When I name things, especially in art, I usually just pick a line or a phrase, which is nice for a photograph or a poem, but nobody wants a really long, poetic party title, and so Shock Value just kind of made sense to me.

Sorry this one is more my vibe and it’s a one time look situation so I’m not wasting ….

Do you consciously think of shock value when you’re creating art, or do you just follow a creative process that ends up having shock value?

I think it’s the latter. I get bored very easily, I like humour, I want things to be fun. I want my work to have a sense of fun. In my writing, I give myself more space to be austere, or sublime, and those things can also be playful, but it’s even more important to me to have playful elements in my art. I think that art is overwrought and dry and pedantic, and that’s not what I want to participate in. Naturally, the kind of personality that I have, combined with my penchant for humour, leads to art that can be perceived as “shocking.” I try not to second guess myself with my work. There always needs to be a part of any work that I’m making or any show that I’m working on that is very immediate and organic. By virtue of that and trying to be true to that, I guess it has an element of the shocking. Shock value is also quite subjective. What’s shocking to one person could be completely ordinary to the next.

As someone who’s established themselves as a presence both in New York and Berlin nightlife, how do the scenes compare?

New York, particularly right now, ironically, is much more regulated. Specifically in nightlife, there’s more red tape, you have less time in the night that you’re legally allowed to party, the spaces have to acquire 50 different licences. When I first came up in the New York nightlife scene, mid 2000s into 2014 or so, everything was illegal. No one threw events in legal venues because Manhattan was dying but Brooklyn wasn’t really a thing yet, not like now when people go from Midtown to Bushwick to party. That wasn’t really happening yet, and so all of the parties were really illicit in one form or another. At that period it did still feel more free, but in Berlin there’s less red tape attached to parties, or the red tape isn’t trying to limit the experience or the expanse of the party. I’m sure there is a lot of red tape here, like all the crazy tax stuff and bureaucracy you have in Germany. Time is one of the most fundamental differences, though. It’s so nice to not have to think about a 4am curfew every night of the week, or that the cops might shut it down because it goes too late. There’s this collective neuroses around the red tape surrounding nightlife in New York, and I don’t think it’s quite as palpable in Berlin.

I remember seeing your Tumblr and being so impressed by your candour about your life and your experiences. With the decline of Tumblr and the censorship thats rampant through so many of today’s platforms and forums, is there a platform today that you feel is a useful tool for sharing experiences and stories?

No, and that’s kind of the sad thing about the decline of Tumblr. I’ve always been a blogger, since I was a kid. I was also a web designer, I made money designing websites for people. I knew Action Script and Java. I had my own websites when I was really young, Angelfire, GeoCities, Zenga, Blogspot, LiveJournal, I had it all. Tumblr was exciting to me, because I had outgrown LiveJournal and I remember my senior year wondering “what’s Tumblr?” and then I started it, and I would originally post random things not really taking it seriously, and then I became obsessed with it, and the conversations it was generating, and the hashtags. People were funny, witty, really smart. It could be research oriented, it wasn’t just social media and superficiality and selfies. I learned so much, I read so much, I found out about so many parts of culture, and alternate queer and feminist histories. It’s really sad, because at one point I had 10 Tumblrs, and when my account was flagged as pornographic they started to delete all of them. Ironically, Tumblr hit me up recently and asked if I wanted to represent them because they knew I was a fan. I was like, ummmmm, if you want to unblock and undelete all of my blogs and not make me got through 8000 photos that you’ve flagged as pornographic. But even then, I wouldn’t actually do that, because I don’t believe in that kind of exceptionalism. You just shouldn’t have the policy in the first place, and it’s not interesting for just me to have my Tumblr back if there’s not a community of people that can freely express and share. I like Twitter, but it’s definitely not the same thing. Tumblr was so much more expansive.

Who are some artists that you’re currently gagging over?

I’ve been listening to a lot of Joanna Newsom, Madvillain. I love Summer Walker, I’ve been listening to a lot of Summer Walker. This industrial band called Clinic, I think they might be German. Lot of Skinny Puppy. I’ve weirdly gotten into country rock, I love New Riders of the Purple Sage and Michael Nesmith and the First National Band. For some reason, I don’t know how, but I fell into country rock, but specifically psychedelic country rock, which is how I describe it. I love the writing of Clarice Lispector. I’m actually reading Toni Morrison for the first time, I’ve never read Beloved before and I’m almost done with it now. There’s this incredible writer named Fred Moten who wrote In the Break, and it’s about jazz and freedom, and I think it’s really cool.