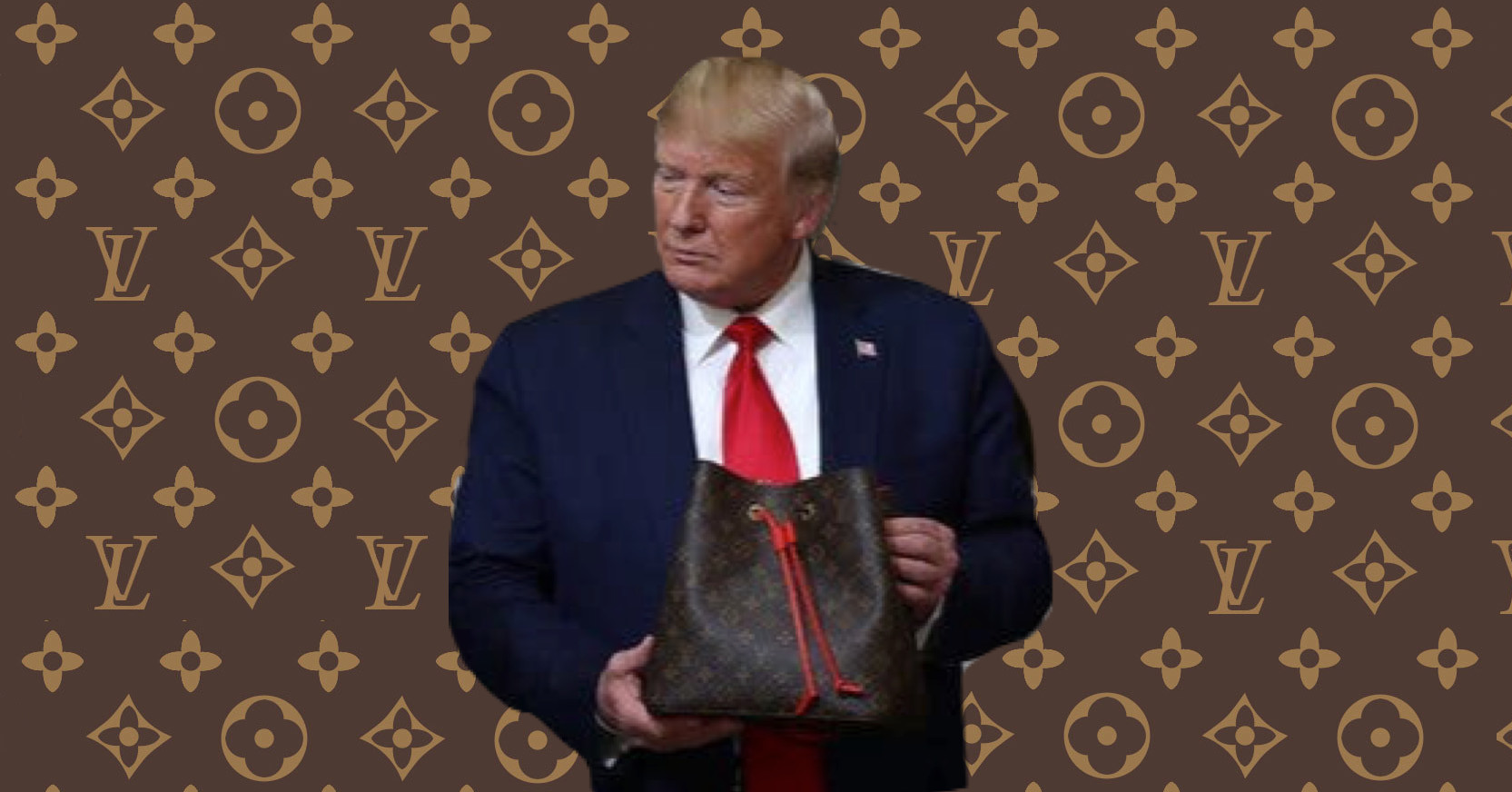 From banned beauty filters to Trump being terrible, here’s your latest fashion and pop cultural digest, brought to you by INDIE.

Following hot on the heels of Trump’s cringe-worthy and incredibly offensive letter to Turkish President Erdoğan (written at the reading level of a first-grader) comes the collaboration literally no one asked for: Donald Trump x Louis Vuitton. While Dolce and Gabbana have made the questionable, albeit unsurprising, choice to dress Melania Trump in their designs on multiple formal and informal occasions, the pomp and ceremoniousness with which the president of LVMH, the largest fashion conglomerate in the world, Bernard Arnault unveiled his unprecedented and very public alignment with the President of the United States came as unexpected. With the Trump administration’s recent tariff increases on certain European goods, this is likely a bid to avoid potential trade disputes.

Commemorating Louis Vuitton’s newest Texas (a fitting venue for the event) workshop which will reportedly bring 1000 jobs to the US, the ceremony held on October 17th included a ribbon cutting, words of endearment towards one another, and Trump butchering the brand’s pronunciation à la “VOO-ton” in a moment that has been meme-ified by Diet Prada.

While in the past brands that have publicly or been revealed to have aligned themselves with the Trump Administration, such as New Balance and Home Depot, have suffered losses due to millenials more actively taking brand corporate responsibility into consideration, could millennials’ obsessions with Virgil Abloh and logomania outweigh the questionable ethics of LV’s weird foray into politics when purchasing clothes? Grab Your Wallet, an organization which keeps tabs on companies with ties to Trump and his administration in a bid to let consumers know where their money is going, has already blacklisted LVMH. Louis Vuitton’s director of womenswear, Nicolas Ghesquière, has since taken to Instagram make his stance clear: “#trumpisajoke” just about sums up how we feel about this.

When Instagram introduced its filter feature it opened up a world of opportunities for fun new stories and photo-ops, starting with the platforms own crop of filters such as the played out heart-eye and puppy filters. With the success of those, Instagram has since allowed users to create their own filters via Spark AR, an augmented reality development platform. While the introduction of the platform is a great opportunity for creatives to share their art and flex their graphic design skills, it’s not all fun and games.

Recently, the platform has been seeing a plethora of filters that augment the users face past the point of recognition — and in particular, filters that mimic the effects of plastic surgery. While some of these filters come across as a critique of society’s brutal beauty standard, others are an obvious attempt to show people what they’d look like with lip injections, fillers, and facelifts, essentially allowing the average person to turn themselves into the Instagram models our explore feeds bombard us with everyday. As if the advent of FaceTune and other apps that allow you to smooth your face to cherubic perfection wasn’t enough, these filters promote cosmetic procedures to the point of potentially triggering dysmorphia. While cosmetic procedures can be a source of empowerment for some, it should be a personal decision and not one arrived to due to a face filter.

In a statement released on Facebook, Spark AR has vowed to weed out any filters that mimic the effects of cosmetic surgery in order to create a more “positive experience” for its users. This comes along with new attempts by Instagram to crack down on content promoting dieting and detoxing. And if you haven’t noticed, Instagram has also very sneakily done away with the “following” section, which previously allowed users to keep tabs on what the people they follow were liking, commenting, and posting in real time. Although the feature may have been useful for stalking exes or seeing which of our friends use bots to get more likes, hopefully the implementation of these new changes allows users to focus more on themselves, their well-being and creating a safer and more inclusive platform.

A post shared by British Fashion Council (@britishfashioncouncil) on Oct 23, 2019 at 2:59am PDT

Ahead of the British Fashion Council’s annual awards ceremony on December 2nd, the nominees have been announced, and while the big dogs such as Gucci, Prada and Dior unsurprisingly received nods, it’s breakout designer Daniel Lee of Bottega Veneta who’s topping off the list with four nominations, including overall designer of the year, and Bottega receiving a nomination for best brand of the year.

His immense success comes only eight months after presenting his first collection for the luxury Italian house during. During his brief time at the helm of Bottega Veneta, he’s reinvigorated the house and established a fanbase and design signatures that take seasoned fashion players years or even decades to achieve. His star rose just as lovers of minimalism mourned the end of Phoebe Philo’s tenure at Celine, who, incidentally, Lee served under as the brand’s director of ready-to-wear prior to his appointment at Bottega Veneta. Lee’s accessories, including woven bags and shoes featuring the houses signature intrecciato weave, have swept front-rowers, celebrities and fashion lovers off their feet and have not gone unnoticed by the BFC as he’s also nominated for accessories designer of the year. Also making the cut in this year’s nominations are Instagram-favourite Simon Porte Jacquemus, and Rihanna, who was previously nominated in 2017 for Fenty x Puma and is nominated this year in the urban luxe category for her new LVMH owned label, Fenty.

Seoul fashion week set it off

While fashion month in the Big Four cities may have culminated in September, Seoul Fashion Week has just come to a close. Fashion weeks outside of the Big Four tend to have a constantly shifting schedule from year to year, as breakthrough designers often end up showing in London, Paris, Milan or New York, such as Berlin’s own GmbH and Ottolinger who both opt to show their collections in Paris. This makes it more difficult for cities like Berlin and Seoul to establish themselves as fashion capitals and be taken seriously within the Fashion Week circuit, but with several major brands and lots more newer, but no less proficient, designers cropping up, this year’s Seoul Fashion Week did not disappoint.

Whereas in Paris or New York you’d gauge the relevance of a runway show by the presence of Anna Wintour, Rihanna, Jennifer Lawrence or other A-listers in the front row, an audience of K-Pop is the tell-tale sign of big shot designer at Seoul designer, and Korean-American designer Kye certainly delivered on that front. Her SS20 collection was a barrage of neons, animal prints, corsets and cowboy hats, a trend that’s been making waves in fashion weeks and is clearly also having its moment in the East.

Kylie gave the performance of a lifetime

There’s a new songstress at the top of the charts, and don’t you let anyone tell you she’s not talented; Kylie Jenner’s “Rise & Shine” is the viral sensation of the month, if not the year. If you’re out of the loop and haven’t seen one of the thousands of memes spawned by the young billionaire’s innocuous Instagram video of her waking her daughter up in a bizarrely vacant room with a song we can only assume is of her own writing, you’ve probably been avoiding the internet. The video went viral within minutes, and has since amassed over a billion views on TikTok and inspired covers by Ariana Grande, Miley Cyrus and Lizzo.

Proving once more that her family (ahem, Kris Jenner) really can monetise literally anything, Kylie Jenner has filed to trademark “rise and shine” and launched an already sold-out range of hoodies retailing for a cool $65. If you haven’t seen this video, you’ve certainly by now seen the memes of older sister Kim crying, which she’s also successfully turned into sold-out merch. While we’re not certain if the song is a one hit wonder or if we can expect an EP sometime soon, we’re sure a Kylie Cosmetics “Rise and Shine” palette is dropping any day now.