WELCOME TO THE FUNK-FILLED AFROFUTURISM OF SUDAN ARCHIVES

Brittney Parks, otherwise known to the music world as the sonically mesmerising Sudan Archives, is on the cusp of delivering a long awaited debut record this fall. Throughout the last few years, the self-proclaimed “goddess” and “visual artist that happens to make music” has crafted an instantly hypnotic, unheard-of fusion of Northeast- and West-African folk music, broodingly sexy and provocative R&B and tingly electronica. “The Earth should be free,” she tells us, nodding at the world’s plentiful political turmoils, none of which however discourage her, or should discourage anyone, from pursuing what they’re after. Just as her music, Sudan Archives as a person seems liberated from the brackets frequently used to hold artists and their vision composed enough to feed a mainstream pop-agenda. She is an ear-taught violinist with ancestral ties to her stylistic influences’ place of origin, and yet she insists on her identity as an American woman, a Cincinnati, Ohio-native very well aware of the world’s, and particularly her home country’s precarious state.

A documentation of recent years’ experiences on both an individual and social level, the soon-to-be-dropped premiere full-length, she says, will tackle what she used to be too shy to explicitly articulate in her art head first. In preparation for this highly anticipated release, we had a chat with Parks during her stop at Melt Festival, where she shed light onto the eclecticism of her work, going from introvert to extrovert, and how Soulja Boy helped her do it.

On Instagram, you wrote that you’re starting your Europe tour with mixed feelings. How did it go for you so far?
This has probably been my longest tour so far. I didn’t know if I would be able to handle being away from home for so long, because I had just settled into LA—I’ve been there for like five years, but I’m just now starting to feel at home, now I feel good. I have healthy relationships and a couple of good, close friends. Before, I was more of a loner and working a lot, so I had mixed feelings leaving said state of comfort, but it’s been so chill! Every show has been very good. Now I only have one more festival to go before I’m headed back home. And then, soon thereafter, my album is gonna come out! I just listened to it in whole yesterday.

So, what can we expect from this album?
It has dark princess vibes. It’s basically my story—from moving out of my childhood home to LA, all the way to now. It’s going to be very personal. Up until this point, I feel like a lot of my writing has been rather poetic, vague hints at things without being too direct. This next chapter is going to be much more confrontational.

Given the personal aspect you’re referring to here, how did that work in regards to working by yourself versus working with others?
I used to always work alone and just get my demos mixed and mastered, but for this record I wanted to work with people and other producers, too. It’s so much more fun than just sitting in your bedroom, lonely, pressing buttons. Also, it reminded me of back in the day when I used to play in church. Here, you have this community where everyone is making music together—I wanted to incorporate this feeling on both the human level and the artistic level,  by bringing in hip hop and dark, experimental sounds with the violin. I wanted to mix it all together.

Where did your self-confidence come from?
In the past, I always wanted to hide and make up my own world. But I knew one thing: I don’t want to work from 9 to 5 everyday and be shy, so I just stopped. In order to succeed in life and be an artist, you have to break free from things like the stage fright and you just have to want it. Some people are naturally shy, but for me it was like a defence mechanism. If you love your art, it’s going to organically happen. When you’re an artist and when you have a vision, your shyness is basically going to break at one point. There are levels of becoming a creative person. So I would just say: ‘keep chillin’, you don’t know, maybe one day, you’re gonna wake up and feel okay.’ For me, I just started to play a lot of shows, and then I started to realise: ‘If I was watching the show from a spectator’s perspective, what would I want to see?’ Now I use that philosophy in every situation in life. 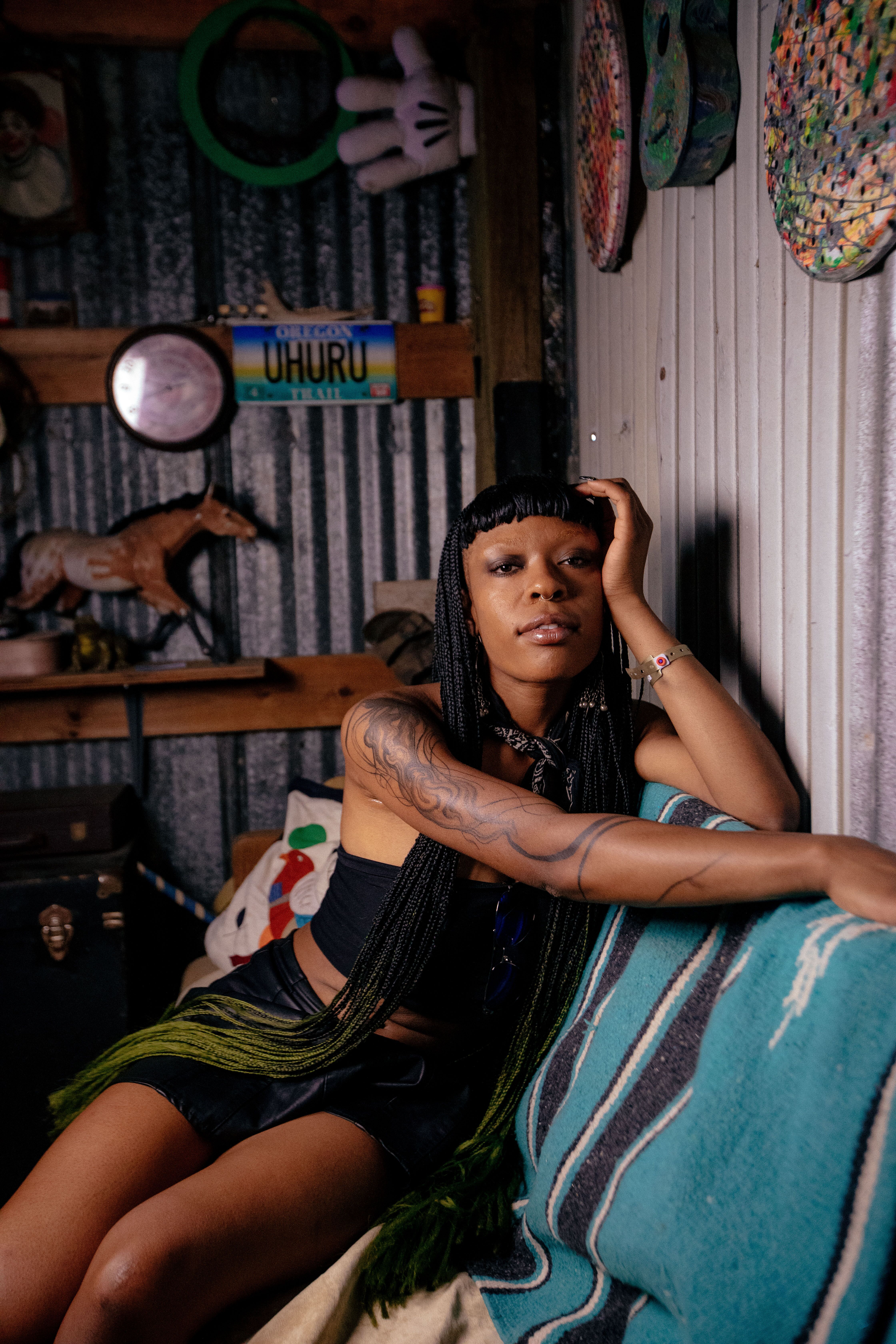 You’ve seen a lot of change in your life, gone from making doughnuts and going to and performing at church to headlining gigs of your own. Did this shift change your concept of freedom?
Totally. I realised that life isn’t just about waking up, getting a job and having a family. It could be about that, for sure, because that is beautiful too, but it can also be about making your own business and maybe even changing peoples’ ideas or helping people break free from whatever might be holding them back. I like to imagine a scientist could be listening to my music and then invent something, come up with some equation because my music set the mood for it. And that is freedom to me—feeling able to have, nurture and further ideas, your own and others’.

I read that a few years ago, you apparently had some rather bad experiences with the producer Derrick Ladd, who wanted you to become a big pop act – what happened?
Actually, it wasn’t a bad experience at all. He is my stepdad and was also the first person who told me that I could make music for a living and that I should consider it as an actual career path. That’s what started the whole idea of me focusing on music. But he had his own idea of what me and my twin sister were going to be. He used to produce for people like Babyface and TLC a long time ago. So he didn’t really know that there is something like experimental music, and that there’s a market for it. He just knew that you have to make certain types of songs to get into major studios or receive airplay on radio stations. But I already had a strong vision, so I knew what I didn’t want to sound like. It came off as me being difficult and me eventually getting kicked out of our house and escaping to LA because of it.

So, how do you view the often controversial music industry now that you’ve found a place for yourself and your art in it?
I think it’s awesome. Mainly because of the internet. You don’t even really need an industry to be a musician anymore, all you need is internet access and something to share through it. That is why I love Soulja Boy, because he was the one who started that whole internet artist stuff. Do you remember that? He was, like, a pioneer,  because he made all his music himself. When I was younger, I looked up to him – he made a huge impact on me.

Aside from Soulja Boy, are there any contemporary artists you look up to or would like to collaborate with?
It’s hard for me to keep in touch with what’s poppin’ right now. I don’t know if she is what you mean by contemporary, but I would love to work with Iva Bittova, she is a Czech violinist and she is so good. Unfortunately, I wouldn’t know how to get in contact with her. Also, I would love to collaborate with Drake. I just started listening to him, so I don’t know a lot of his music. But I actually really like it so far because it’s trancy, kinda dark, really self-aware. He talks about real life.  His songs are always slow and vibe-y, they’re never crazy fast. I just like that tempo. I could really see him sampling my violin.