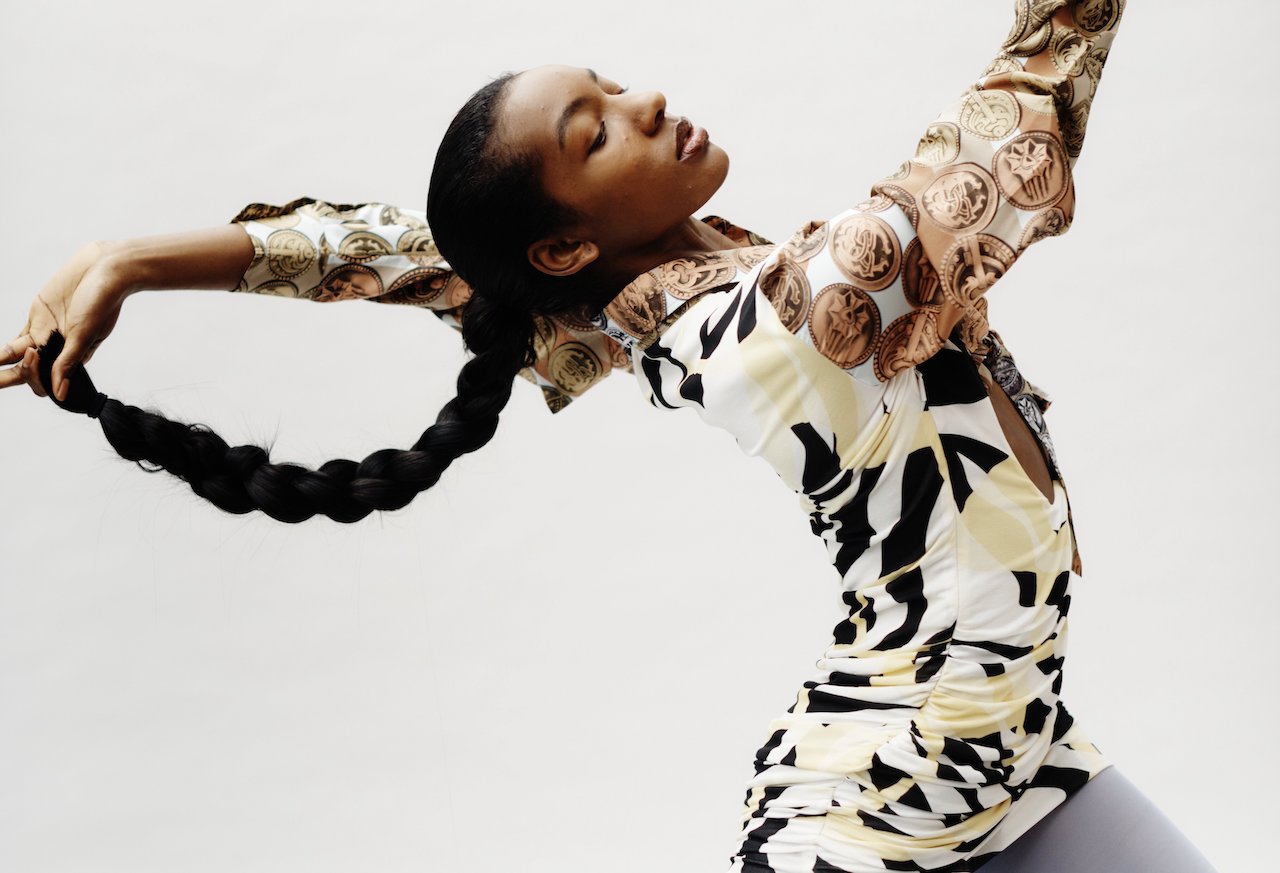 24-year-old Precious Adams took her first ballet lesson aged eight, and hasn’t looked back since. Born in Michigan, she’s trained across the world including both America and Canada’s National Ballet Schools and Russia’s renowned Bolshoi Ballet Academy, before eventually settling in the UK as part of the English National Ballet in 2014. A tour de force on and off the stage, throughout her career Adams has been vocal about the lack of diversity in dance and her experiences of racism within the industry. In her commitment to calling out injustice and changing the face of ballet, even her smallest moves are scrutinised. Last year she opened up a discussion about wearing brown instead of pink tights to match her skin tone, a decision which she said she makes on a case-by-case basis depending on her performance. Her comments hit a nerve and quickly made headlines.“I still wear pink tights for certain roles and certain costumes” Adams clarifies.“It was more me opening up the discussion with my boss, but things get blown out of proportion and it became this controversy.”

In her five year professional career, the trailblazing star has wowed audiences and critics alike with performances as beguiling as they are technically brilliant, and in 2017 she was promoted to the revered position of First Artist. I managed to catch the English National Ballet star in a rare moment of down-time between rehearsals to talk MTV memories, racism in dance, and how she’s pirouetting her way into ballet super stardom.

What are your earliest dance memories?

I always used to dance in the living room—I’d put on MTV and dance to whatever was playing. I started doing dance classes when I was seven, taking jazz, tap, hip-hop and all that stuff. My teachers suggested I try some real ballet classes and it all took off from there.

It changed my life. From the first moment I tried ballet, I was obsessed with it—I had every DVD and book from the library and every day after school I would go and practise. I’ve taken ballet classes six days a week since I was ten years old.

What made you want to join the English National Ballet?

It was five years ago now, when Tamara Rojo had just become the new director. It was a big moment, she’s a female director with a strong personality—she’d had a huge career and she’d already started making these massive moves with the company. She doesn’t go with the status quo and I wanted to be a part of that. I think she’s one of two if not, three or four women who are a director of a world class ballet company. It’s quite rare to have a female in a position of leadership. I’m a black dancer, which is an anomaly in and of itself, and especially was at that point—Misty Copeland had just been promoted to a principal dancer, and that whole diversity in ballet conversation was only just kicking off.

You describe being a black dancer in ballet as “an anomaly”. Did the lack of representation in ballet make it difficult when you were starting out?

I’ve been myself my whole life. You don’t necessarily know that you’re different or one of a few all the time.

There are perhaps a few moments where it hits you in the face that you’re not like everyone else. I don’t get those moments much anymore, but I always remember when I was younger, when I was nine years old, my cousin said to me,“How come there’s no brown people in your dance group?!”

You’ve spoken about the racism you faced while training at the Bolshoi Academy in Moscow [Adams was left out of shows and on one occasion encouraged to“try to rub the black off ”]. How did you deal these experiences?

I think when that happens in the present you don’t really know how to react, but I knew where I was going to train and I knew before I went to Moscow that I was probably going to be the only black person and I might experience some discrimination. It affected me but I can’t say it shocked me to my core because I was fully aware of what I was getting into and what I was doing. The ultimate point was that I was going to get really good training out of it.

Have you noticed the industry change a lot?

100%. And I think after Misty Copeland was promoted, no one could really stop that train, it was always going to blaze forward. She has really paved the way for opening up the discussion and getting people to just stop making a thing out of being black in ballet.

What’s been your favourite performance so far?

We did Stravinsky’s The Rite of Spring a few years ago, and we’re doing it again in London in a couple of months at Saddler’s Wells. I remember I just felt so in touch with the feelings of why I love dance and being a ballerina in the first place. It’s this kind of legendary piece where they cover the stage in earth, like three or four inches of dirt, and we’re wearing these almost see through sheer dresses in earth tones, these beautiful nude dresses. The whole thing is about the rites of spring—we’re all supposed to be virgins and we’re entering a meadow and seeing the men for the first time and there’s one, the chosen one, who changes into a red dress, and it happens on stage because no one leaves the stage during the whole performance, so somehow she changes into this red dress and no one sees it, and she’s the chosen one who gets sacrificed at the end of the show—she literally dances herself to death.The dirt gets everywhere and it’s this really powerful and amazing performance. I loved being part of it.

How do you balance working with your life outside of ballet?

I find it so important to have that balance, and not to get too involved in one and neglect the other. Shaping who you are as a person is important, and it’s just as important to feeding who you are as an artist and developing yourself as a performer. A lot of dancers say that when someone dances they can’t hide, and I think it’s true—it really reveals your soul, it reveals what’s going on in your life, what you’re feeling, what you’re thinking. It’s a practice that I’ve spent my whole life working on. Compartmentalising how you feel and what you think outside of what you’re doing in the present moment is a very important skill to have, because if you’re going through something really hard in your personal life it starts to affect how you dance, and that’s my career, my pay cheque, so it’s really important to know how to separate the two. It’s also one of the most beautiful things about dance: you can tell from the way someone moves how honest their dancing is and how honest their movement is—you can see who has internal conflict. You can really tell who a person is by watching them dance.