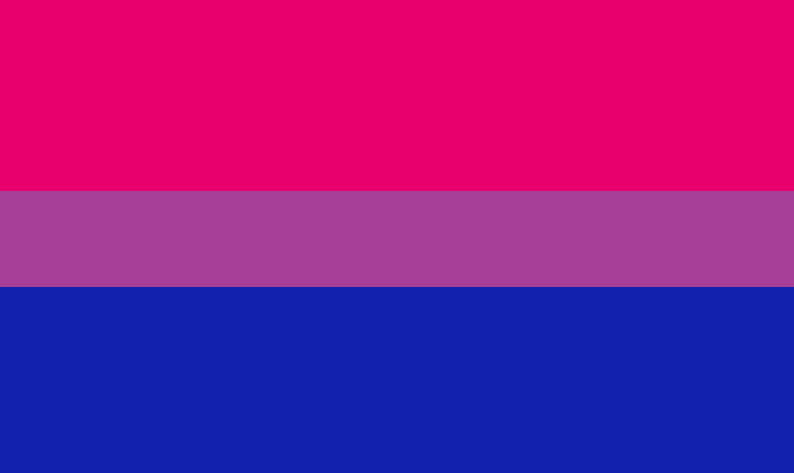 WHAT SPACE IS LEFT FOR BISEXUALITY WHEN GENDER IS NON-BINARY?

In honour of this year’s Pride month, we take a closer look at the B in LGBTQ+, to examine its meaning, media representation and relevance for a generation coming of age in an era of boundary- and binary-breakage.

“Personally, I think choosing between men and women is like choosing between cake and ice cream; you’d be daft not to try both when there are so many different flavours.” This endearing analogy, uttered by equally endearing Icelandic icon Björk, stresses her steadfast opinion that “everyone is bisexual”. But even if bisexuality doesn’t describe everyone, it makes up the largest proportion of all people non-compliant to the adjective ‘straight’.  Simply put, bisexuality is a term to describe individuals who feel romantically and/or sexually attracted to both sexes, meaning their preference is neither exclusive to men nor women.

But despite its sizeable demographic, and the numerous studies which conclude pure hetero- or homosexuality to be a myth, bisexuals often fall victim to social ostracism. Too gay for straights, too straight for gays, bisexuals are too frequently labelled as frauds or experimentalists, incapable of committing to one sole party. And as society’s understanding of sex and gender progresses, leaving little room for binaries, ‘bi’sexuality becomes increasingly complex.

A constant and bothersome companion to bisexuality is its apparent ambiguity—society’s inability to grasp the potential for erotic or amorous interaction with not just one of the two sexes has wrongfully made bisexuality a matter of superstition. A recent study found that bisexuals, of all sexual minorities, are the most likely to suffer from mental illness along the lines of anxiety and depression, stemming from both internalised and externally inflicted biphobia on account of stigmatisation and discrimination induced not only by straight people, but by members of their own community as well. The most prevalent vehicle for intolerance of bisexuals is (surprise, surprise) the narrow-minded idea of there only being two sides to pick from, leading to nonsense-assessments à la “bi people are repressing something”, “bi people are on the verge”. Moreover, male-identifying bisexuals are regularly pigeonholed as gay men who want to feel more “normal” every now and then by strutting alongside a woman, whereas many bisexual women endure belittlement, their experiences reduced to mere trial and error phases of rebellious college years.

But what does being bi even really mean in an age when dating apps such as Tinder offer more than 20 options to describe one’s own identity? How timely is the concept of bisexuality when we’re on the cusp of throwing out expired definitions meant to mathematise human sexuality and identity politics? Connecting the dots—ranging from those force-feeding frequently surreal interpretations of bisexuality to the rusty roles and rules of gender coinciding herewith—brings along another, very new problem for and with the titular term. Bisexuality is rooted in duality—its name is predicated on the ‘fact’ that there are two genders: male and female. Present day’s discourse, however, has done its best at dismantling said duality, pushing the notion of gender as a social construct. What makes bisexuality a problem for mainstream culture to comprehend is the underlying, subtle reality that it ultimately caters to everyone but the straight cis-man—unfathomable for a mindset cemented in patriarchal convictions. It, with other things, then leads to a phenomenon called bi-erasure, and furthermore to bigotry at its broadest, sourced from wide-spread disregard for sexual fluidity and refusal of the concept that one doesn’t feel exclusively drawn to one thing in favour of the other.

It’s this exact type of treatment that exhibits the general populace’s insufficient degree of sensibility in dealing with matters “out of the ordinary” and why, despite it’s historic prolificacy (ancient Greek, Japanese and Roman depictions of bisexual relationships were fairly common), sexual fluidity didn’t gain mainstream momentum until the 70s, when Freddie Mercury and David Bowie emerged as two high profile beacons of the cause. Where previously bisexuality had been the product of retrospective speculation—Hollywood figures such as James Dean, Marlon Brando and Greta Garbo were ‘outed’ after their careers ended—pop music popularised bisexuality in the present—and for an audience beyond the queer underground.

That’s not to say Bowie’s take on bisexuality exactly exuded ‘Pride’—in fact, the artist explained more than once that officially coming out did him more harm than good. Still an undeniable legend in- and outside of the LGBTQ+ cosmos, Bowie—just as other people in his shoes—had difficulties with the term in question, revoking or minimising claims again and again—to the point that, to this day, biographers, fans and exes alike remain unsure wether or not he felt honestly attracted to women and men, or was merely intrigued by bisexuality on a shock value- or curiosity-level. It resembles the kind of borderline sensationalism that brought forth Madonna and Britney’s VMA kiss, vague-at-best comments by celebs in interviews and other question-worthy instances of how bisexuality has been brushed up against, but rarely embraced on a genuine level by people of public interest.

It all charts back to what is referred to as the male gaze—the filter through which we’ve been taught to consume our environment, particularly by way of media. Even the little bits and pieces one does see tapping into alternatives to classic hetero monogamy are mostly blemished by negative stereotyping and bizarrely hypersexualised scenes fresh out of frat-bro wet-dreams. Going against this grain is Desiree Akhavan’s series “The Bisexual”, in which the 35-year old actress, director and HBO’s “Girls”-alumna has managed to entertainingly and thoughtfully depict what might be be one of the first examples of how to pop culturally handle the often conflicting topic of being bisexual with care.

Aforementioned proceedings considered, execution and a heightened awareness for cause-and-effects are why a new generation of vocal youth has, across all platforms, boosted a conversation to crack open the boxes we are either placed in, or choose to place ourselves in for fear of bad resonance. More modern, more inclusive designs like pansexual—the tendency to sexually or romantically like someone in spite of biologically- or self-ascribed traits of gender or sex—are on a rise. To many, ‘queer’ is the least restrictive of all labels, indicative of liberation from the binary. In this instance, it seems as though bisexuality in its traditional sense no longer remains the most politically correct of all notions.

But that being said, we mustn’t forget: labels can do harm, but they also set free. The ability to engage in conversations like these is a privilege we’ve been afforded in the West—a privilege that’s important to remember at the time when our part of the globe celebrates Pride, while others in the LGBTQ+ community elsewhere are being imprisoned or even killed for their sexual identities. Bisexuality, and everything that has branched from it to articulate sexual fluidity, needs to be taken seriously within our own, local spaces—just as serious as every other letter in the line-up that constitutes the LGBTQ+ umbrella. Resisting to defy suppressions of any kind—even if you’re not personally vulnerable to their consequences—results in nothing. It’s only through efforts to increase visibility inside our already comparatively progressive realms that we can transport Pride’s cause to places still at unease with non-heteronormativity, and actually feel proud.