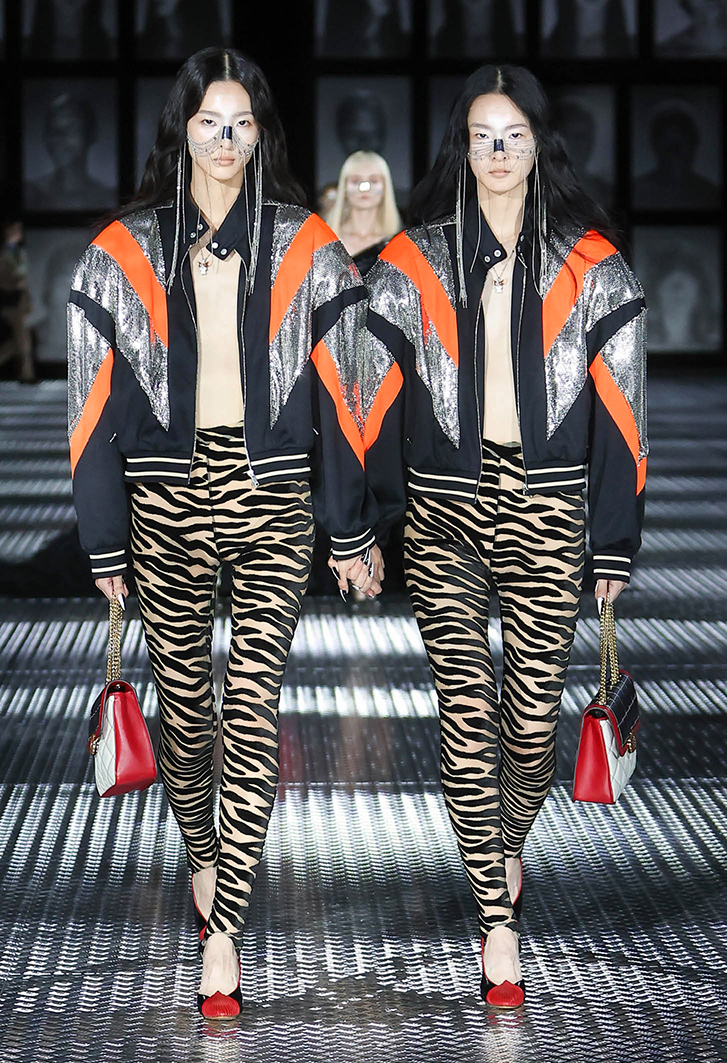 As Italy ushers in its most far-right government since Mussolini, sequinned FUORI!!! jackets shouted loudly at Gucci’s SS23 ‘Twinsburg’ show on Friday. Both a play on words for “coming out” and a reference to the country’s first radical LGBT liberation front, on the cusp of the Italian elections, Alessandro Michele brought a welcome splash of camp to Milan Fashion Week. “In a world where politics is a catastrophe and the planet is a disaster,” the designer told Vogue, “as human beings, the only weapon we have is to imagine something else and make it happen.”

But more than politics, Gucci’s ‘Twinsburg’ was irrevocably personal. Inspired by his own upbringing, the show paid homage to Michele’s “two mothers”: Eralda and her twin Giuliana—harnessing the innate intimacy intertwined in an identical existence, and confronting duality within.

“I am not a clone, I am not a copy—I am different”—Marianne Faithfull’s haunting voice bellowed as models walked along a wall printed with black and white portraits. The collection’s experimental silhouettes, patterned co-ords, and Gizmo the gremlin garments were experienced in singularity before the show’s uncanny climax: As the wall was lifted, each model’s identical counterpart—68 in total—was revealed walking simultaneously by their side.

Twins, Michele posits, “since birth, are well aware of not being at the centre of the universe. They are used to living with another self. The boundaries of their body don’t correspond to the boundaries of their being.” Behind colour and camp, gizmos and gadgets—(wrenches and spanners to be more precise)—in the context of the Italy into which it was received, with fascism on the rise, the most pertinent aspect of Twinsburg wasn’t its clothes, but its overarching (and perhaps unintentional) message—extending empathy to the intricacies of another and understanding the often indecipherable nuances of others’ experiences.