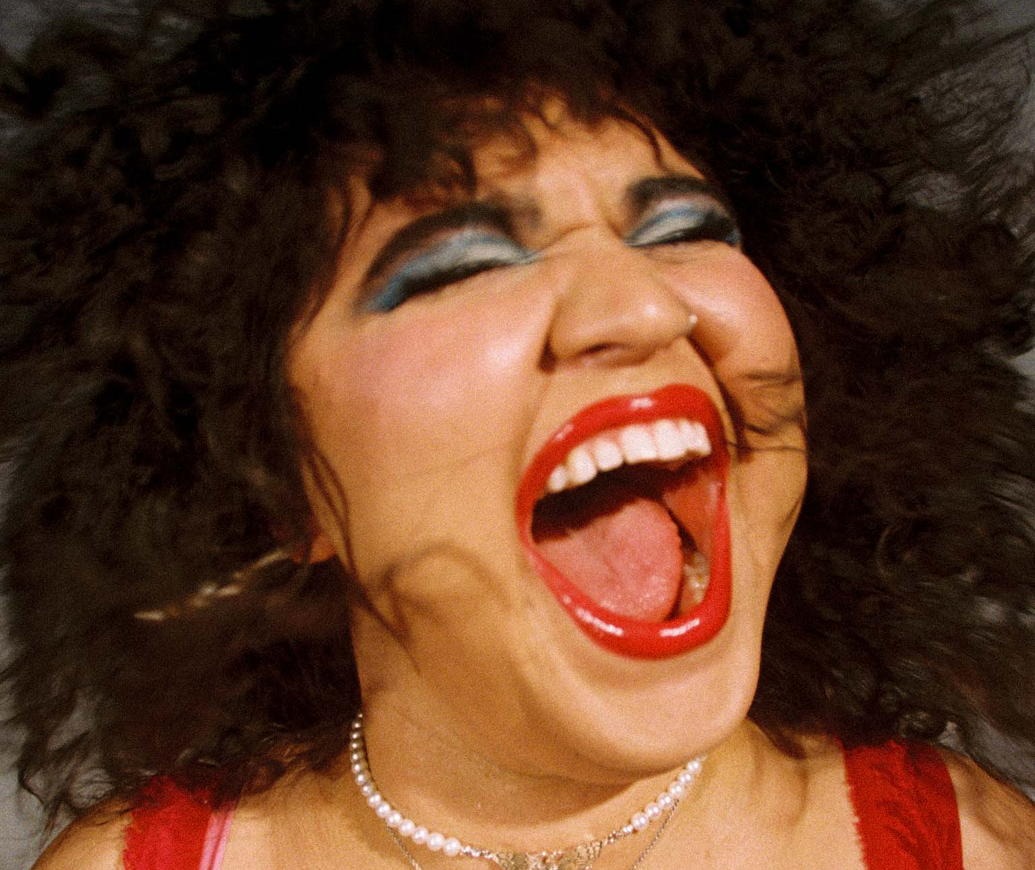 Of the many performing acts at Primavera Sound, Remi Wolf felt particularly in her element in Barcelona—a city known for its vivid colours, Art Nouveau facades and sensuous, warming energy. Much like the Catalonian capital’s most famous architect, Gaudi, the Palo Alto native is an artist who amplifies the joy in the wacky, wonderful and weird. While the velvety quality of her voice is already unmistakeable, Wolf and her music also live in a psychedelic world of her own creation: a mythical, rainbow space filled with curious textures, surreal props and delightfully maximalist interiors. Wolf’s universe is basically Pee Wee’s playhouse, but Gen Z edition.

Paired with funky rhythms and infectious melodies Wolf’s playful lyrics also mirror her visual identity. And as an artist who often sings about carnal desires, she also makes sonic space for a universal interest that rarely makes its way into pop music: food. From her adulterous affair with Fritos in ‘Sexy Villain’ to her love-fuelled preparation of eggplant parmesan in ‘Hello, Hello, Hello,’ one of the wonders of Wolf’s musical imprint is her clever articulation of the joys of taste.

In keeping with the theme of INDIE’s spring/ summer issue, I tracked Wolf down fresh after CUPRA’s Impulse Event, and just hours before her performance at Primavera for a rapid fire Q+A about what taste means to her. Traversing the seemingly endless festival grounds—meandering between the CUPRA and CUPRA x Boiler Room stages and the CUPRA VIP area—I found Wolf in her trailer, dressed in plaid and topped off with a gecko cap.

Oh god, I immediately go to music, but I don’t want to out myself.

…so your own bad taste?

Not necessarily, but I do have horrible taste in movies. I like rom-coms, which people think are bad. But actually, that’s a pretty sexist point of view, so I take that back.

Imagine you showed up in someone else’s home. What’s something that would give you the ick?

Gushers. That’s a big guilty pleasure of mine. I feel like gushers are good taste, actually—but bad in the sense that they are bad for you and only kids eat them.

Well if I get them I eat the whole box. That’s why I feel guilty. Or another guilty pleasure is Post Malone. I love him— but he’s also kind of great! That’s the thing, what does taste even mean? I don’t think it means anything. I think it’s just personal and that’s why so many things exist, to appease everybody. You know?

If you were a spice or a seasoning, which would you be?

Well I would want to be salt because everybody likes it, and it just makes everything better. I’d be flakey Maldon salt.

The other day at the airport in Rome, we bought our way into this lounge because we had a 5 hour layover. They had pasta and we thought, “Ok wow — we’re in Italy, this will probably be amazing!” I decide to eat this pasta at 9 in the morning. It’s lukewarm and I don’t know what the hell they put in it, but it tasted like vomit. I was hungover too, which made everything worse. When in Rome, don’t get the lounge pasta.

What’s the secret recipe to a hit?

I don’t know, I don’t have a hit! I guess repetition and pitched up vocals, that seems to be the recipe nowadays. TikTok seems to like that shit.

What’s the last thing that left you salty?

What is your ideal musical taste in someone else? If they invite you over and put on a record, what’s the panty-dropper?

Ok, “panty-dropper” is a crazy vibe. I guess Alex G? I mean, I can get down with a lot of stuff, if it’s the right person. I think they would have to have broad taste. There would have to be a lot of different things going on.