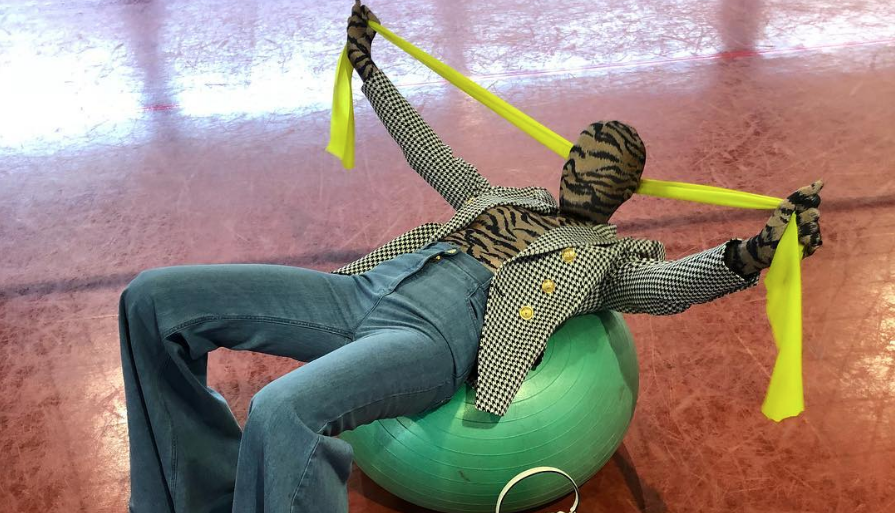 @CHECKING_INVOICES ARE THE MASKED DUO INJECTING FUN INTO FASHION

When the Instagram accounts of most fashion influencers bombard us with unattainable beauty standards, jet-set lifestyles, and sponsored posts endorsed by the biggest fashion designers, it’s no wonder the fashion world seems cold and inaccessible to the mere mortal. Regurgitating the same looks, same shows and same monotonous poses, one of the main issues plaguing the fashion world is that it just takes itself too damn seriously. Enter Checking Invoices, the masked duo injecting life and originality into a repetitive fashion routine.

Behind their IG account, @checking_invoices are a Milan-based photographer and stylist duo who have established themselves as an eccentric, humorous, and mysterious breath of fresh air in the oversaturated sphere of fashion influencers. Pairing over-the-top and flamboyant bodysuits (Morphsuits, but make it couture) with the latest hot-off-the-runway fashion, they galavant about in the most uproarious of looks, undoubtedly startling the Milanese fashion haute monde. Their viral Instagram posts are shot in some of the most banal of locations, from the local park, to the grocery shop, to the metro, and recently, with their continuously rising star, the duo have been invited to sit front row at some of the most hotly anticipated fashion events—all while keeping their identities obscured. Their name, Checking Invoices, is a sarcastic nod to the frustrating act of chasing pay cheques—an administrative task all freelance creatives seem to be subject to, showing that there’s humour to be found in even the most tedious aspects of the industry.

And this new species of fashion influencer is clearly a welcome respite. The anonymous duo have amassed a 75K strong following, and in an era of oversharing and self-promotion, it’s refreshing to see an online personality brimming with actual personality. And they haven’t gone unnoticed by the fashion elite either, being catapulted early on into the public eye through a meme-based collaboration with Gucci, and several other high profile projects since then.

Between their busy schedules as a photographer and stylist, and maintaining their online presence, INDIE caught up with the duo to get their thoughts on inspiration vs. imitation, the ethics of the fashion industry, and the shows they look forward to each season.

🐯 Keeping it real for @rougefashionbook

Many use fashion as a tool to attract attention to themselves, and you guys wear some of the flashiest looks around but choose to stay anonymous. What’s the thinking behind this?

It all started very naturally—it was a necessity, as one of us doesn’t like their picture taken. We’ve since realised that we have initiated a sort of Instagram trend—we say “Instagram” as we are aware that other artists and designers have used a faceless concept in the past. In our case, facelessness is used for entertainment, but historically covering one’s identity has always been present for various reasons (political, social etc).

There are plenty of accounts that have started doing similar things and in some cases they have crossed the line, as the idea was very similar to ours and they were not giving us credit. For example, after our Fendi show appearance, Cardi B appeared in Paris fashion week with a full body suit covering her face for shows. Our followers spotted it and starting tagging us in every post.

Designer clothes aside, where do you get the incredible bodysuits from?

We started by using fabrics and stockings to cover the body, and gradually we realised that something more “structured” could be fun. We began sourcing bodysuits and then moved onto designing and producing all the suits ourselves in order to have more variety and eccentric looks.

What’s been the best public reaction you’ve gotten while shooting?

The best was probably during the Fendi show, as we were seated for the show we had a place in the front row with a lot of other influencers who were trying to communicate using SIGN LANGUAGE (The Checking Invoices character doesn’t speak) in order to guess who was under the mask—they were sure it was a famous person from the fashion world hiding under the suit. Models’ reactions backstage were pretty funny too and especially on the street outside the show with all the street style photographers. We have had all types of reactions as you can imagine! Sometimes people laugh, others want a picture and sometimes, they don’t even pay attention.

Your account is all about making fashion fun, but with social media being such a powerful marketing tool, do you ever see the account as a form of promotion for your styling work?

As we do not share our identity, the styling for this project is very specific and  it doesn’t really represent our real life jobs/style. As a result, it’s a bit difficult to think about the promotion of the styling—it would mean that our identity would have to be unveiled.

Did you have a favourite show from this past fashion week season, and is there a designer(s) that you look forward to every season?

Prada is always a show that we can’t wait to see because of the aesthetics of the brand and of course for the respect to the Signora! Gucci is for sure an inspiration and an exciting moment of the fashion world. We love Fendi too and we are excited to see what’s gonna be without Karl. There are many brands that are interesting and we love to see, like Y/Project and Balenciaga. It would be an infinite list of favourites!

Your follower and like count has risen exponentially since your first post at the end of 2016—was there one moment that you can remember when people started to take notice of what you were doing?

There have been several moments that have pushed our following. At the very beginning (300 followers) Gucci contacted us to do a Meme’s project which gave us a lot of visibility. Dazed then published an interview with us. Then we had Vogue US and subsequently Vogue Italia features, as one of our personal videos went viral on Instagram. Then there was the Archive Now project and the Fendi show last season. Apart from the brands and the press though, all our followers are a fundamental part of the promotion of the account as they are very dedicated and constantly supporting us!

I’ve read online that in real life you guys are a stylist and filmmaker duo—in an industry that’s notorious for not giving credit where credit is due and not properly compensating people for their work, it’s interesting that the name of your project is “Checking Invoices.” What are your thoughts on these aspects of the fashion industry and have you had your own experiences with them?

That’s right. Of course we have experienced it in our professional lives, but it’s become even more prevalent with Checking Invoices. We think the fashion industry is notorious for plagiarism because of the speed it moves at. Accountability gets thrown away with the trends. Funnily enough, Checking Invoices was just a light-hearted reference to the delivery notes we were receiving with clothes.

Is there a chance we’ll ever get to see the faces behind Checking Invoices?

The account’s identity is based on non-identity, so it would be against our concept to show our faces. Anyhow, never say never. If we ever decide to close down the account, maybe there would be a possibility to reveal our identity and take the credit—but it’s not in our near future plans.

What’s something you wish would change in the fashion industry?

Less drama in the industry and more awareness about human rights and work conditions in the manufacturing processes as well as waste management within the industry. Fashion has become too fast to follow and too fast to be appreciated and consumed responsibly.

Your posts and outfits are only getting more exciting and outrageous—how do you see the growth of Checking Invoices and what’s in store for the future?

We would like to do a short movie and we are planning to launch a small capsule with some pieces just for fun, but we are in a very early stage, so we can’t say more 🙂