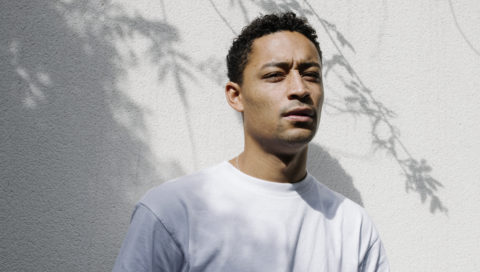 LOYLE CARNER ON FOOD, FAME AND REWRITING THE RHETORIC OF RAP

Croydon-born Benjamin Gerard Coyle-Larner, more commonly known as UK breakthrough act, Loyle Carner, has already stolen the hearts of millions. From his scintillating and sensitive bars to his eye-opening and perceptive ethos on self-care, the multi-faceted 24-year-old talent preaches honesty and grit, as well as progressive attitudes towards mental health and wellbeing—whether its through his initiative Chilli Con Carner, which helps kids with ADHD discover the therapeutic qualities of cooking, or the effortless eloquence of his music. A sincere storyteller possessing some of the most subtle, raw and confessional poetic lyricism of the decade, Loyle Carner is fast becoming the down-to-earth sensation that the music industry needs. With the highly anticipated release of his next album Not Waving, But Drowning fast approaching and ahead of his sold out European tour, we caught up with the Londoner to talk life lessons and lyrics. 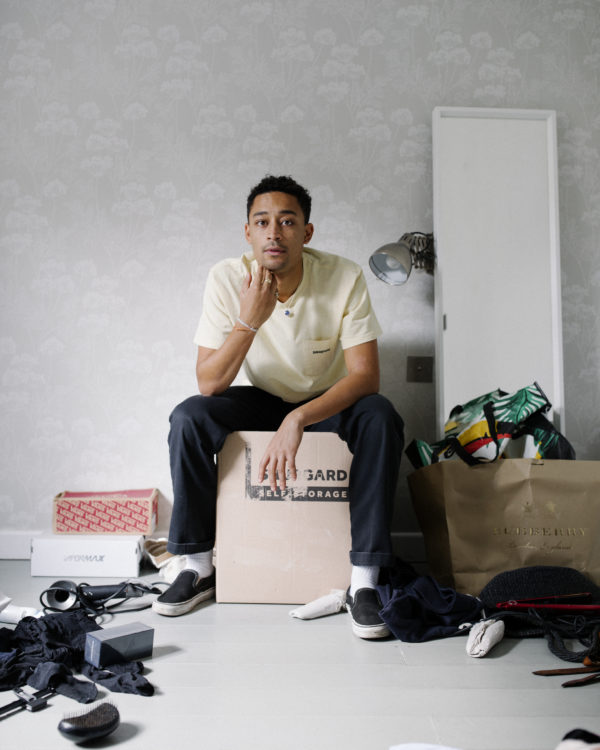 So Ben, your stage name derives from your youth, can you tell me more about it’s origin?

Well I used to say Loyle Carner by accident because I’m dyslexic and used to muddle up the consonants, but I guess now that I think of it, it was a happy accident. People used to take the piss out of me for it and I thought it was better to make fun of myself than to actually let people make fun of me.

It’s true. A poet called Langston Hughes has been one of my greatest influences of all time, as well as the writer Benjamin Zephaniah. Any UK rapper or grime artist you can think of, I’ve been listening to them all since I was very young. I reckon I started producing at around 14 or 15. I became friends with people who had studio spaces or mics in their homes so that I could go and makes beats and record with them.

What’s the story behind Not Waving, But Drowning?

It’s a line from a poem that my grandad had written down, and I was really fascinated by it so I Googled it. Turns out it’s the name of a poem by a woman called Stevie Smith about a guy who cries wolf. One day he’s out at sea swimming and all his friends are on the beach and he’s waving frantically at them. They look at him thinking he’s showing off about how far out he’s got, but in reality he’s saying “help me”—in the end he drowns. It resonated with me because sometimes I have that feeling. People look at me and think that because I’ve found some form of moderate success, that I’m ok, when really, I feel like I’m drowning. I need a helping hand every now and then. We all do.

Alright no more singles. My new album “Not Waving, But Drowning” drops April 19th. Pre-Order via the link in my bio

How was the process of making this album?

It was extremely nerve-wracking at first purely because the first album I released actually did well, therefore I put a lot of pressure on myself with this one. My mum used to say to me that you just have to create and move on—so I thought fuck it, it might not be the same as the last one and it may not be as good either, but it’ll be different.

Location is something that’s very prevalent in your music—many of the tracks contain explicit references to London or other parts of the UK. Do you think growing up there has influenced your music style?

Massively so. I do love South London where I grew up—and it’s where I’m still growing up now. It’s just a really important place to me because it’s sort of been all I’ve ever known. Any album is just a snapshot of time. I want to be able to look back in the future at my music and think oh yeah that was this time. To just know exactly when it was and what was going on as well as how I was feeling at the time.

Do you have anything in particular that helps you with your creative process?

I used to play all my stuff to my mum but now seeing as I don’t live with her anymore, I play my music to my girlfriend—and she knows everything about rap, literally everything. She’s a big fan of people I look up to. I’m at the point where I have no idea whether my music is good or not and she’s genuinely the only person who will tell me if it’s shit or not! Eating better, exercising and looking after myself are also key. Swimming is one of my favourite things in the world—I swim three times a week and it keeps me extremely chilled. Of course every now and then a cheeky little beer helps to keep my mind on track too!

Speaking of your mum, the new album opens with Dear Jean, almost as though the record itself is a letter to her. She’s obviously had a very strong impression on you growing up and still plays a huge role in your musical progressions…

You know it’s weird, she just pops up in stuff because she’s such a guiding light in my life. It’s not on purpose either! The way in which I make music just allows her to appear and it always works out. She’s one of my best friends. 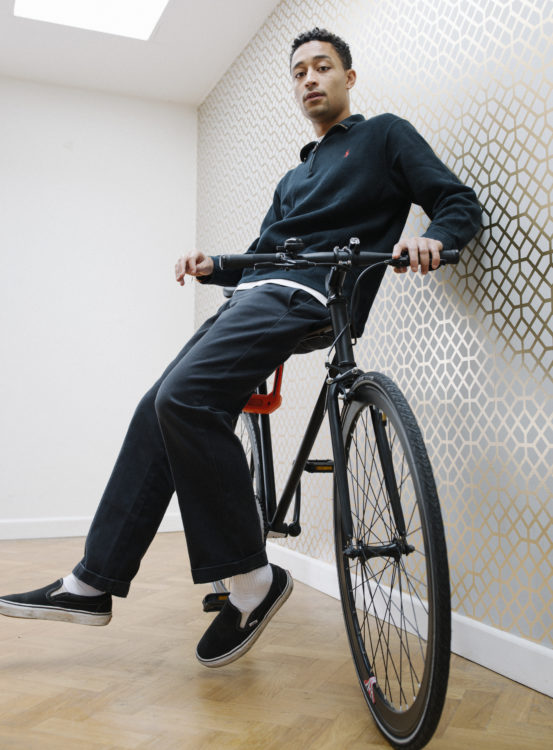 Your delivery sets you apart from many other artists—when you rap it’s almost like you’re talking or reading poetry. Where does this approach to music come from?

You know. there’s mixed reviews about my delivery with music and how I say what I want to say. American people say I’m monotone and that there’s no emotion, but there is. I don’t put on a voice, if it’s not there then I just don’t force it. Many famous musicians who are constantly in the public eye feel that they need that form of validation—I’m the opposite, I don’t like things to be perfect. I suppose that when I make music I’m making it for myself, so when I listen back to it I know how I felt in that moment—for example my voice might crack or I’ll get embarrassed but I usually always take that first really real recording. The rawness in my music is where it’s at. People I look up to are artists like MF Doom, Common and Most Def—who are really animated. UK music has had the biggest impact on me as well for sure. There’s one Nirvana song that I really like where they just couldn’t get the delivery right, and then Cobain sat on a chair and said I want it to sound like this—so someone came round and just put a mic on him and they recorded it like that—it was perfect. That’s just it. That’s how it should be.

For as long as you’ve had one, you’ve used your platform as an active opportunity to help kids. Do you think rappers have a responsibility to be conscious of today’s youth and to change the sexist and violent rhetoric that still dominates the genre?

I don’t think music necessarily needs to have a message BUT there is a responsibility that you carry with music as a songwriter or rapper. It’s really frustrating when grown men are still talking about selling or doing drugs, shooting people, sleeping with women. What we have to remember is that kids these days are listening to that type of stuff—it infiltrates every aspect of their social lives. My little brother came home one day talking about ‘purple drank’ and I was so confused…he’s 16, why the fuck is he talking about that?! If rappers say, ‘I need to keep a knife on me’, kids that day will go to school with a knife on them. I just feel that if you were an individual who grew up around heavy trauma and certain physical or violent struggles, why would you share that with other kids in that way? They just end up traipsing down the same path you did—why do you want them to go through that too? 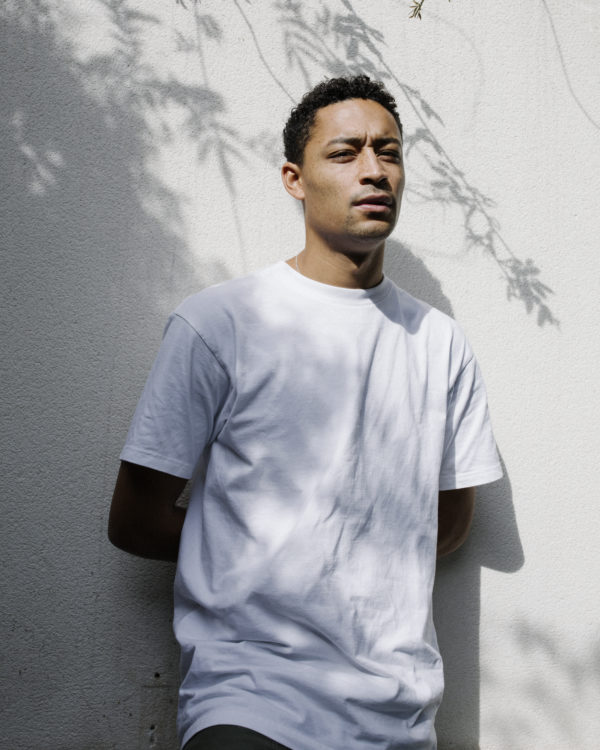 You’ve become a real mentor for people with ADHD, especially thanks to your cookery school. Your album also features songs that reference chefs and food, like ‘Looking Back’ and ‘Carluccio’—does cooking unleash a new side of you?

Yeah definitely. Regarding my personal struggle with ADHD, I ended up finding a real peace and sanctuary in cooking. It became a form of meditation for me because I’m a person with such a busy brain—cooking is also how I bonded with all of my family members. My dad, mum and grandparents were, and still are amazing cooks. Everywhere I went, food was the unifier. So I figured if it worked for me it then it could work for kids in a similar situation, and that’s why I set out to create the school in collaboration with a friend called Mikey who runs a collective called Goma. It was important for me to do something that wasn’t just music, slightly for a selfish reason because I wanted to keep myself busy, but also because cooking is what I’d be doing if I wasn’t making music.

Finally, the most important question—how do you like your eggs?

You know what—eggs have been making me feel sick recently. I like them fried over-easy, but yeah they’ve been freaking me out, like when I think of what they are. None of that snotty business!

Not Waving, But Drowning is officially out on April 19th