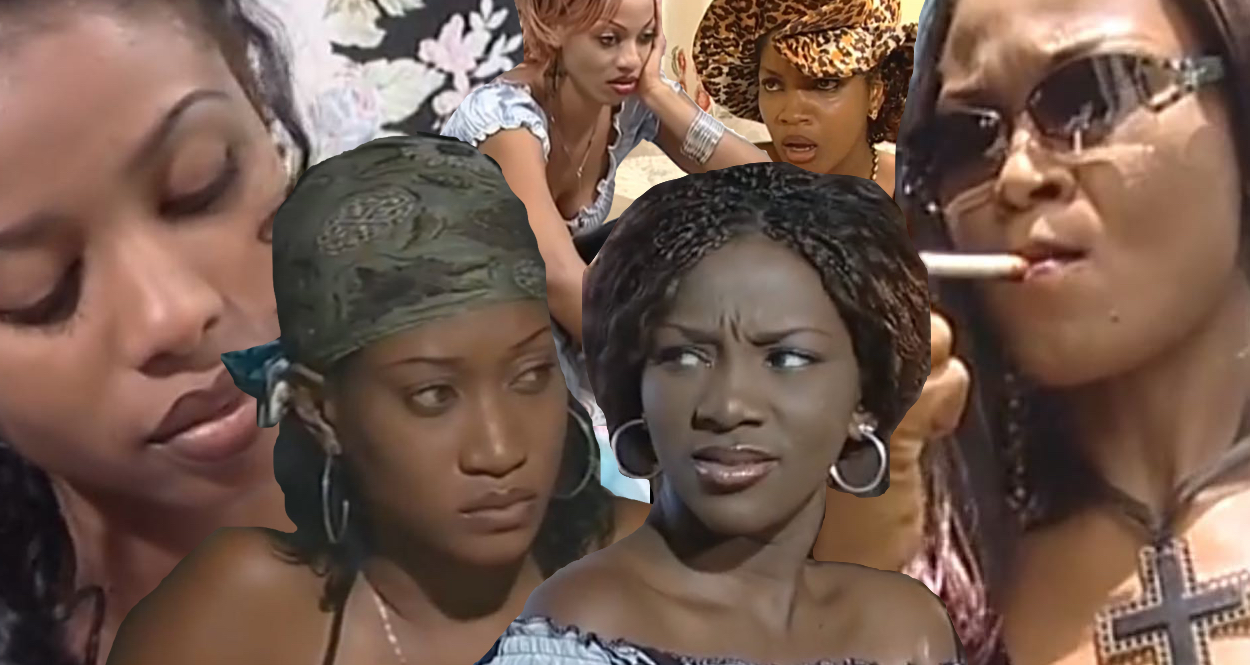 THE ARCHIVE CELEBRATING THE FIERCE FEMALES OF ‘00s NOLLYWOOD

The Nigerian film industry is one of the most prolific in the world. Churning out upwards of 1500 films every year on a combined budget that would struggle to fund five Hollywood blockbusters, Nollywood is not only a booming industry—grossing on average 600 million dollars per year—but a core facet of Nigerian national identity and self expression. Born from a period of national social and economic strife, when importing entertainment became near-impossible, Nollywood is an industry created by Nigerians for Nigerians. It’s often aspirational—flashy portrayals of material wealth read as the American Dream equivalent to the almost 87 million Nigerians living in extreme poverty—but it’s also accessible. Its narratives, characterised by meddling, malice and melodrama in its loudest, proudest form, play out amidst real life settings, and speak (however over-dramatically) of the trials, tragedies, flirtations and family dramas that resonate with the realities of Nigerian society. Roles are often played by local actors, who are upheld as idols in their communities, a stark contrast to the ungraspable, slippery sheen of highly polished Hollywood. But what Nollywood lacks in budget, it more than makes up for in theatrics. Its approach is incontrovertibly no gloss, no frills—all drama, guided from the get-go by the notion of excess.

And its characters are ‘extra’ too. Its men are often macho, over-confident Type A ‘ballers’, but it’s Nollywood’s women who really stand out. They are maneaters, bill-payers, breadwinners, smokers, drinkers, cheaters and liars of their own accord. And while these fiercely independent and hotly headstrong characters don’t always meet a favourable end (the industry is still plagued by a misogyny that results in these types of cold, calculating depictions of women destined for comeuppance) the female protagonists of old Nollywood subvert societal expectations through their assertive, take-no-shit attitudes. It’s these women, with their cooly condescending expressions and Gucci garbs, that populate the feed of Instagram archive @nolly.babes, an account dedicated to celebrating the majestic matriarchs of vintage Nollywood. Co-run by sisters Ebele and Tochi, New Yorkers by way of Nigeria, the account is a lo-fi treasure trove of the boldest, baddest looks and attitudes from ‘90s and ‘00s Nigerian cinema. We caught up with the sisters to find out how the babes of Nollywood are emboldening African women and debunking societal expectations the world over—as well as serving looks.

Was Nollywood a big part of your life growing up?

Nollywood was always a guilty pleasure of ours. We didn’t really have the movies at home, but our aunt always had the latest home videos at her house. I distinctly remember a sense of excitement when the Violated series starring Ego Boyo was first released and rushing to her place to watch them.

As Nigerians growing up outside Nigeria, how did the ideals of Western beauty impact you?

Before Moving to New York, we actually went to boarding school in the UK and that’s where we were first bombarded with western ideals of beauty. We were at that age when insecurities are ripe (pre-teens) and Britney Spears was at the height of her fame so you can imagine the idea we had of beauty and how unattainable that was for us. I think the biggest impact though was living with matrons and house mothers who knew nothing about our culture or beauty routines. I remember them picking through our braids with lice combs and that stinky ointment after we tried to explain to them that black people don’t get lice! In any case, us and the other Nigerian girls led a mutiny in our boarding house so I guess we’ve always had a bit of that Nolly Babe attitude in us.

And how did leaving Nigeria affect your attachment to Nigerian culture? Do you think it made you seek out more of a nostalgic connection to your heritage?

I think we have idealised a lot of what it means to actually live in Nigeria because our memories are of a carefree joyful time. After moving away, things like getting our hair braided (which wasn’t as widespread and trendy as it is today in the western world), going to weddings and other celebrations were ways for us to connect with home. We also visit home when we can and still maintain strong ties.

What made you start @nolly.babes?

We enjoyed sharing the pictures between ourselves and the page started out as a hobby with no intentions of growing into what it is now.

Why do you think the account has gained such traction? What about these throwback stills and depictions of Nigerian women then do you think resonates so much with women today?

I think its twofold—style from the late 90’s and early 2000’s happen to be making a huge comeback right now and that look was encapsulated and in our opinion perfected in the prime era of Nollywood films. The actresses must have dressed themselves because the looks they wore on set are reminiscent of what we see ‘influencers’ wearing on instagram today in a nod to that era. From Gucci monograms down to the socks, iconic Fendi baguette bags to animal print ensembles. The other aspect is beauty. These women weren’t overly made-up, or bleached (as many of the stars in Nigerian media are today). They are naturally beautiful women of all shades, sizes, and heights. I think it’s refreshing and all-round encouraging to see. Every black woman has a Nolly Babe they can look at and see a reflection of their own beauty!

What kind of woman is the ultimate Nolly Babe—what qualities does she possess?

Nolly Babes are assertive, stylish and quick witted. Some may seem meek or coy at first, but it’s a guarantee that those women pack the meanest punch. They are matriarchs and leaders, often times the breadwinners in their homes. They are complex dynamic women.

And what kind of role do women in old Nollywood play—were the roles typecast or very diverse?

I would say there are a few female role archetypes in Nollywood. The Vixen. The Femme Fatal. The Campus Queen. The Witch/Mami Water. The ambitious greedy social climber. The Mother in Law from hell and her counterpart the perfect daughter in law eager to please.

How did the babes of Nollywood impact beauty standards (both in Nigeria and further afield)? Were young girls trying to assimilate these women back then?

Back then, in publications like City People (a people magazine with inside scoops and gossip) and Ovation, Nollywood stars were always the centre of attention. As the socialites of our society, what they wore definitely guided what was popular.

The images on nolly.babes evoke much more than just nostalgia—partly because your audience is wider than just Nigerian women, but mainly because it feels very feminist. What’s your aim with this account? Who do you hope to reach and inspire?

We hope to buck societal expectations of women all over the world but most notably in Nigeria and Africa. These women were bad-ass, independent and sexy. We are taught to be NONE of these things as women in the hopes of securing a husband and maintaining a certain reputation. These women and the roles they played are aspirational in many senses, but particularly in their interactions with men. These women were playing by their own rules and living like Lil’ Kim lyrics. A prime example is Sharon Stone played by Genevieve—a smart co-ed juggling three men at once. Now, we’re not encouraging cheating but damn it men do it ALL the time and get away with it. In these films women are taking the reigns showing that men don’t have to have the last say and often SHOULDN’T in a society as rampant with toxic masculinity as ours.

I’ve read a couple of articles that place @nolly.babes in the same realm as the Lagos alté scene—dubbed by the media as a creative, rebellious generation. Do you think there’s a link between the attitudes nolly.babes embodies and the consciousness apparently shared by creative Nigerian youth? What’s your relationship to this scene?

I’m not sure I really get what the term means, because I’ve seen it attributed to people and creations that leave me scratching my head. What I do love is the wave and emergence of artists and creatives especially those authentically promoting Made in Nigeria products and aesthetics that are unique to our culture. No relationship to the scene. I love the part of it that isn’t just about shaving my head and wearing really tiny sunglasses. Create, inspire, and a special shout out to everyone doing it without support both emotional and financial.

THIS! By Eucharia Anunobi.