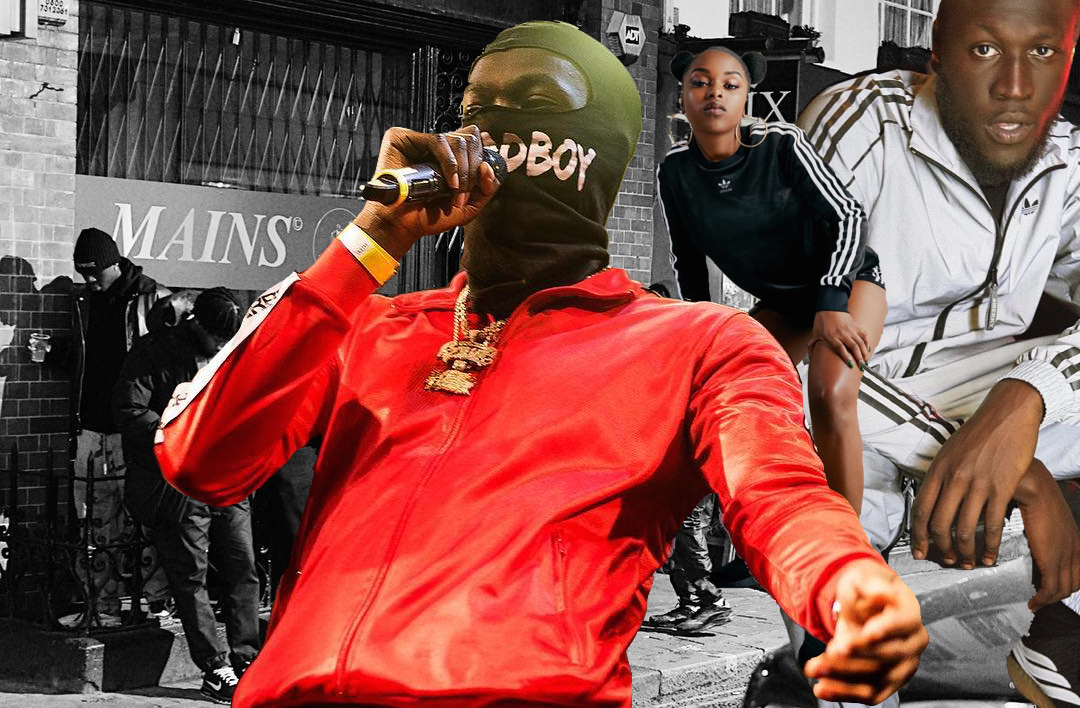 THE EVOLUTION OF: TRACKSUITS – HOW UK GRIME TRANSFORMED THE SPORTSWEAR CLASSIC

Went to the show sitting in the front row // In the black tracksuit and it’s shutdown. These now-notorious bars of Skepta’s classic: ‘Shutdown’, throw shade at the elitist fashion industry, but, conversely, they also underline UK grime’s role in propelling the tracksuit to high fashion heights.

Tracksuits have been a part of UK culture ever since their invention. Us kids of the ’90s donned mismatched sportswear apparel as everyday attire—from the shimmering velour that got quickly covered in mud, to the deep polyester pockets brimming with Gameboys and Beanie Babies. But it was decades before this that the athletic garments were first born. In 1967, German brand Adidas collaborated with German footballer Franz Beckenbauer, and it was this alliance that gave birth to the pinnacle of modern sportswear. By the mid-’70s, other brands—Kappa, Nike, Ellesse and Fila to name but four—had followed (track)suit.

Throughout the ’80s and ’90s, tracksuits gained increasing mainstream popularity. Not only were they prolific in the athletic realm, but they infiltrated all other aspects of popular culture. Here in Europe, Rotterdam’s hardcore and underground rave scene, gabber, adopted tracksuits as its party attire and Sporty Spice introduced more velour and crop tops to the younger demographic than any other musical act at the time. If you hopped across the Atlantic, you’d see tracksuits worn by hip-hop icons like Run DMC, not to mention the glossy sheen of those playing basketball in the streets. But to all these individuals, tracksuits symbolised a form of subcultural status; they still meant absorbing and embracing the coolness of urban lifestyle—not evoking some elitist fashion mentality.

Fast-forward to the early 2000s, England: the birth of UK grime music, and tracksuits took hold once again. First emerging from the tower blocks of London’s East End, grime developed from the early British electronic, garage and jungle style and then slowly started to integrate elements of ragga and dancehall.

Grime originates from black culture and is a form of complete self expression. Made in the streets, for the streets, it emanated out of a desire and need for the young marginalised black community to speak about their experiences. A quintessential component within grime music is the strong jab it makes towards the British class system and its inherent injustice towards the less privileged citizens of the UK. This is why grime has a reputation as being fairly aggressive and political (check out ‘Question Time’ by Dave from his latest album Game Over)—but  also what led to its undoubted success. Grime swept over Great Britain faster than a rain shower on an October afternoon and then further amassed millions of followers worldwide. The demographic that it attracts ranges from children as young as 10 to adults in their mid 30s—a target market for sportswear brands.

Grime has always been a genre so sure of its internal vision that it only made sense for it to be seen (quite literally) in a specific way too. On Skepta’s ‘Man’, the grime pioneer declares he’s “dressed like [he’s] just come from P.E”—a reference to the British schooling gym class where practically all the students wear tracksuits and t-shirts. Hailing from Tottenham, North London, the artist (real name Joseph Junior Adenuga) is one of the most revered and critically-acclaimed names in the genre, recognised for hit singles  ‘That’s Not Me’ and ‘No Security’ and winner of two MOBO’s, one BET, one NME Award and counting. Skepta is one of the main trail-blazers in terms of merging grime into mainstream culture so when he dubbed his all-male crew the “tracksuit mafia”, he asserted a grime identity that people actually took notice of; a whole wave of the genre’s young artists started sporting their new unofficial uniform.

But the tracksuit is more than just a sign of grime affiliation, it’s a garment of protection and force amongst UK youth. Not only does it hold connotations of being low-key and secretive—as JME spits “I don’t wear no bait designer brands; I spit deep bars in my black top”—the uniform allows its wearers to assimilate each other, and go unnoticed on the notoriously nefarious streets of London. Commentary has been made against tracksuits claiming that they’re only worn by dangerous gang members, but Stormzy directly combats this in ‘Wicked Skengman 4’ when he says “everybody calm down it’s a tracksuit, what the f*** man? I ain’t gonna stab you”.

Mentions of police altercation and discrimination against grime artists are prolific throughout many of the genre’s songs and music videos. ‘Gangland’ by Young T & Bugsey featuring Belly Squad opens with the line “Runnin’ from the boys in blue, all I hear is nee-nor, nee-nor”, and this continues as the hook of the track: a blunt remark surrounding the treatment of grime artists by British police and the stigma that they’re connected to gang culture and misbehaviour, resulting in police force and being consistently tracked. The video for Lethal Bizzle’s smash hit ‘POW 2011’, (which features multiple other grime gods) show the rappers running from police and being followed by police cars and vans. One thing that’s synchronised in both these videos is that every single grime artist is dressed in a head to toe black tracksuit. This further reiterates the common belief that these garments are a symbol of allegiance and alliance to the genre and its respective advocates.

With the incorporation of grime into mainstream culture, there came some changes in a few of its key characteristics. Once it had gained widespread appeal, long gone were the days of low-budget homemade videos, gritty and raw London experiences and large rap-battle gatherings. The ethos of grime more or less stayed the same but the genre itself became a lucrative and profitable sector of the music industry transporting its main headliners like Stormzy and Sketpa from rags to riches in the space of a few months. This was bound to happen as grime was gaining transatlantic appeal with the likes of Drake and A$AP Rocky both collaborating with Skepta. Yet through it all, for them, the tracksuit remained an emblem of the real rugged history of grime.

In the video for Stormzy’s 2018 track, ‘Line’, the tracksuit becomes a symbol of the artist’s roots. In the beginning he and his crew are seen fully clad in head to toe Adidas cycling through the pastel grey streets of London. The video ends with them, still in tracksuits, eating takeaway food in a ridiculously fancy grand mansion—a subtle hint at the rise of Stormzy’s career from the road to royalty.

All I need is one mic.

Grime artists’ integration of sportswear into contemporary youth culture in the UK is ever-present and stronger by the day. From Skepta’s much hyped collections with Nike and MAINS to Stormzy’s sold-out Adidas collab, grime heavyweights are doing more than establishing sportswear’s subcultural appeal, they’re inviting their fans to assimilate. And their reach goes further than the spheres of fashion and music—with Stormzy teaming up  with Penguin Random House on his #Merky Books venture to discover new writing talent, and  his Cambridge University Scholarship program where he pledged to financially support two black students by paying for their tuition fees and full university course. Of course his intentions are from the heart, but it’s easy to see how Stormzy has managed to slowly filter into all sectors of British culture—bringing the tracksuit along for the ride.

Along with all this elevation and exposure through grime, comes an elevation of the sportswear classic thats incongruous with its subcultural roots. As tracksuits have become thrust in the spotlight, as a signifier of grime attitude and the subsequent ‘cool’ status that follows, they’ve become more and more coveted and sought after by people who actually know nothing about grime subculture or the real history behind it. Luxury, high end designers have appropriated the unofficial uniform of the street. The affordable and ergonomic essence of the tracksuit, which didn’t insinuate a divide among its owners, has been destroyed by designers like Gosha Rubchinsky and the cult fandom surrounding Supreme. When Gucci adopt the attire of the lower class and place a €1380 price tag on it, it speaks of the recurring problematic appropriation we so often see in high fashion. Although they’re still a key staple of this vibrant and politically charged subculture, tracksuits have been copped and turned into a ‘cool’ aesthetic for the upper class, but it’s our duty to remember their roots.