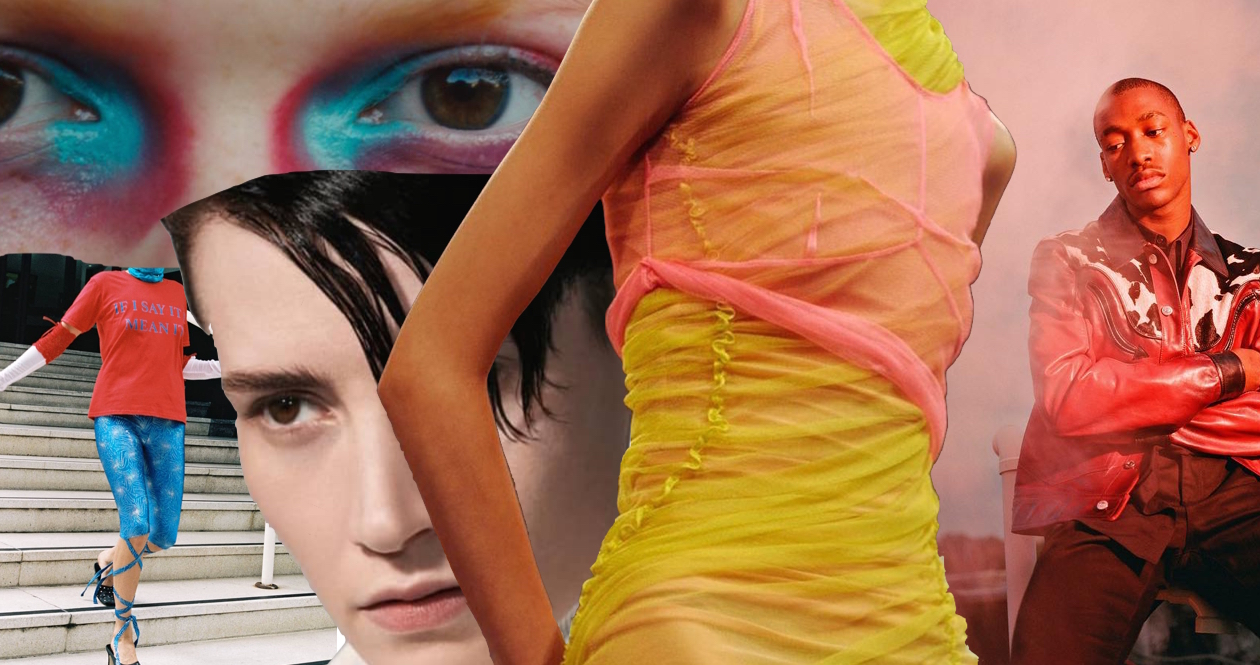 2018 was in many ways–good and bad–a year of change and learning how to deal with it. Contrary to Kylie Jenner’s infamous 2016 conclusion, every year is—and should be—a year of “realising stuff”. No matter which spaces we turned to in the last year, be it fashion or politics, music or environmental issues, lots has happened and, whether we like it or not, we’re obliged to take the experiences we’ve gained from past’s 365 days with us into future’s 365 days. But as we’re still coming to terms with the fact that yet another year has passed and the responsibility that accompanies said fact, we decided to have a positivity-fuelled look into 2019’s most inspiring and promising talents, as they prepare to fully take off. Some more established than others, this diverse cast of  19 international, soon-to-be superstars should most definitely be on your 2019-radar if—like us—your new year’s resolution is to start fresh, with a brand new pair of eyes. So, in alphabetical order (we’re not ones to reinforce a hierarchy) we present INDIE’s 19 for 2019.

AFTERHOMEWORK (PARIS)
At only 15 years of age, Pierre Kaczmarek founded his label as—you guessed it—an after homework project. Fast forward a couple of years, the now 19 year old and his girlfriend slash business partner Elena Mottola have become a fully formed fashion label, a force to be reckoned with. Having been the youngest person ever to be nominated for the prestigious 2018 ANDAM Prize, it appears only natural to expect Kaczmarek’s AFTERHOMEWORK (PARIS) to really bust the glass ceiling this year.

CHARLOTTE KNOWLES
Charlotte Knowles silently manoeuvred her way into the UK creative scene’s limelight ever since graduating from London College of Fashion a few years ago. Now, Knowles and her elegantly provocative aesthetic have made her one of Fashion East’s current headliners, as well as having contributed to 1 Granary’s most recent print project, “VOID”. These things under her belt, the Brit and her namesake label most certainly have the potential to hit international store shelves.

CHRISTOPHER SMITH
You can’t help but be stunned by South African photographer Christopher Smith‘s work: The 22-year old is a master of transformation, as he incorporates his time-traveling aesthetic into a very own take on Cindy Sherman-like, grotesque self-portraitry and montage. In an age in which we find it perfectly normal to take pictures of ourselves, Smith completely redefines the term “selfie” through his subversive methods.

DANIEL LEE
Guided by the enigmatic genius herself, Daniel Lee has spent most of his professional life working as a member of Phoebe-Philo-era Céline’s design team. Time well spent and easily recognizable within his vision for Bottega Veneta—a house he’s been appointed the Creative Director of following his years at the aforementioned French ready-to-wear brand. Clearly capable of filling the gap left by Philo’s departure, Lee and his luxuriously minimalist sportswear might be a ray of hope for those unsatisfied with Hedi Slimane’s take on Céline.

DANIELLE NEU
Danielle Neu’s ridiculously beautiful photography is reminiscent of fellow masters of the craft, showcasing confident women in intimate settings, gazing longingly in and away from her camera lens. Combining Peter Lindbergh’s severe-but-tender black&white with Juergen Teller’s knack for charmingly odd angles, Neu’s approach feels refreshing but familiar, classic but new. Thus far, her work has been featured in POP and Re-Edition, amongst others.

DOZIE KANU
It’s hard to appropriately articulate the art and work of Texas-native Dozie Kanu. The American designer’s creations bend and break every attempt trying to define them. Furniture? Sculpture? Fine Art? Whatever it is, it was enough to impress Milan Design Week and Rimowa, as the latter equipped him with products for a collaborative installation. To insiders, the odds are high for this kid, and 2019 could be his year to prove to the rest of the world that he just might be the leading 3-D artist of his generation.

THE GARDEN OF GOOD AND EVIL
In light of Tumblr’s recent ban of adult and/or in any way sexually liberal content, we find ourselves in desperate need of alternative platforms to please our naughty selves. German artist-led @thegardenofgoodandevil is a Tumblr-feed-gone-Instagram, creating and sharing gorgeous, majorly NSFW-illustrations of boundless erotica—all fetishes included.

JALAN & JIBRIL DURIMEL
Twins Jalan and Jibril Durimel have probably seen more of the world than others see over the course of an entire lifetime: At the tender age of 17, the siblings started studying film in LA, only to soon work with the likes of Grace Wales Bonner, Kenzo, Dev Hynes and Tyler The Creator. Having spent their lives in between the Carribean, Miami and California, the two’s images often depict sunbathed coastal tranquility, celebrating black beauty, strength and fragility in a way we’ve never seen prior.

JAMES J. ROBINSON
While, at 18, most of us have merely an idea of what we want to do with our lives, James J. Robinson had already begun to lay the foundation for what would become a very fruitful career in photography. Hazy, neon-colored romance in every shot, his aesthetic is what Instagram-dreams are made of. Calling him a newcomer does not do his impressive CV justice, however, after working on VOGUE Australia’s September Issue last year—lensing none other than Kylie Jenner—, Robinson has officially reached the business’ Mount Olympus. 2019 very well could—and should—belong to this talented Aussie.

THE JAPANESE HOUSE
Amber Bain aka The Japanese House has been around for quite some time now, having steadily released down-tempo, ethereal, dreamy indietronica over the course of nearly half a decade. But this year protrudes as a milestone in the British musician’s career as she’s set to let loose her debut full length within the next couple of weeks. Distinctive in sound and voice, we believe Bain will finally receive the widespread recognition she deserves.

KROW KIAN
Vancouver-native Krow Kian is a true up & comer if there ever was one: The androgynous beauty swiftly nabbed the honors of being the first ever transgender male model on the cover of L’Uomo Vogue. Needless to say, with a kick-off like this, it seems almost impossible to raise the bar even further for the rest of the year. However, we have high hopes for the Canadian beau and wish to see and hear far more from him in- and outside of glossy fashion mags, 2019 and beyond.

MALIBU KEN
We all enjoy when musicians come together, collaborate, mix their styles in ways they could’ve never by themselves. This time around, we’re psyched to hear of Aesop Rock and Black Moth Super Rainbow’s Tobacco joining forces as Malibu Ken. An intriguing fusion of hip hop and new wave-inspired electronica, Malibu Ken brings to the table a sound unheard of before, and we dig it.

MAGGIE ROGERS
American singer-songwriter Maggie Rogers made waves around the world back in 2017 with her Pharrell Williams-approved track „Alaska“. On the cusp of her debut album’s drop this January, the eclectic artist seems willing and able to unleash even more from her repertoire of skillfully crafted folk-pop gems.

MAXINE BEINY
As a designer specialized in umping up the volume on pieces we thought we’d already seen the best of, Maxine Beiny should definitely be on your 2019 list of people to look out for. Most notably, her edgy, sexy take on leggings is irresistible. Being people who practice what they preach, check said bottoms out on last year’s INDIE Dark-Issue cover.

MEI-LING HO-SHING
As a Parkland-shooting survivor, Mei-Ling Ho-Shing has made it her mission to make a difference. Following last year’s horrific events and the international debate followed by it, this High School senior rallied a group of fellow students of color around her to expand the conversation that had been surrounding the incident and further address gun violence, particularly in Black Communities. Frustrated over the discrepancies in attention given to cases of similar nature against minorities vs. predominantly white victims, Ho-Shing has travelled multiple states in the US, held speeches and interviews to advocate for her cause, and will continue to do so this year. We can’t wait to hear more from this inspiring young woman.

OLI EPP
An art-world star on the rise, painter Oliver “Oli” Epp is one-to-watch. His explosive-in-colour, character-heavy canvases are a fun blend of satire and earnestness, somewhat reminiscent of fellow pop-artists KAWS or Keith Haring. Niche-curators and gallerists better get aboard Oli’s train before it paces right through to higher grounds.

VASSILIS THEOTOKIS
If you’ve ever thought there’s only one way to wear eye-make up, think again, because Vassilis Theotokis is here to prove you wrong: The makeup artist’s eyeshadow-artwork is gaining world wide recognition with every face he paints, giving a whole new meaning to the idea that „the eyes are the window to one’s soul“.