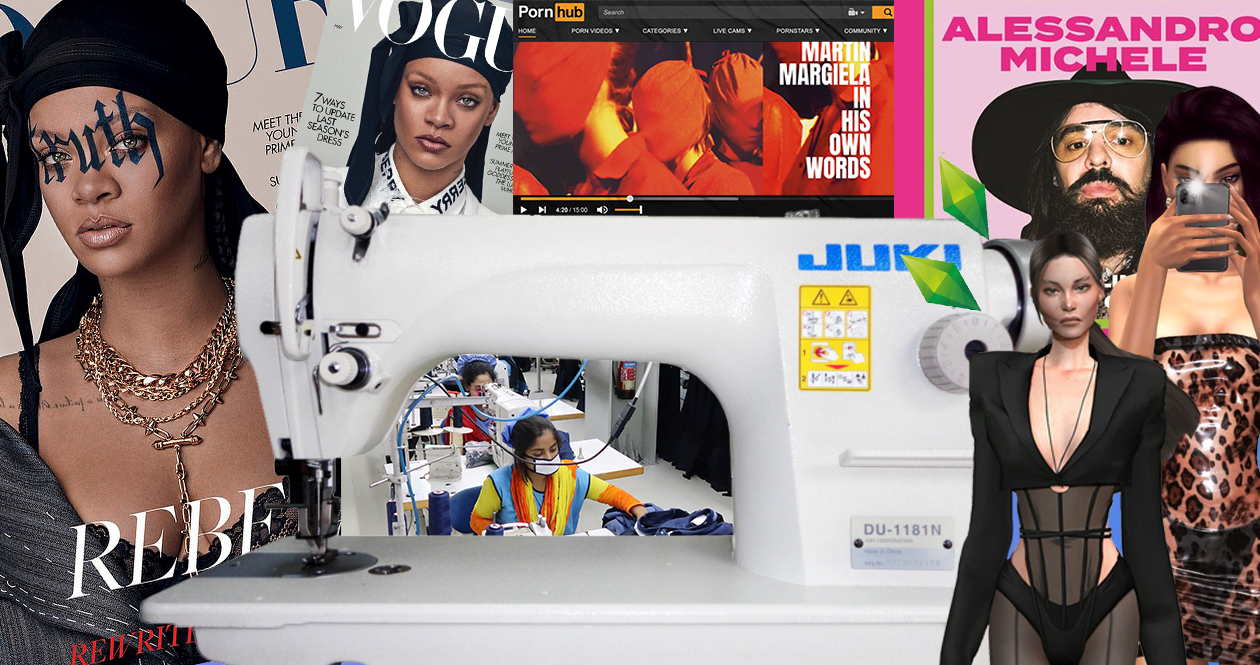 THIS WEEK IN FASHION 3/4

This week, the coronavirus battled continued. Today marked the milestone of over 1 million reported global cases, with the number doubling in less than a week, and countries around the world are imposing harsher lockdowns with harsher penalties, with the Philippines’ President ordering the police and military to shoot anyone who disobeys the lockdown. In these tumultuous times, we need a break from the news—so INDIE has rounded up 5 things you may have missed in fashion this week.

Rihanna donned a durag for Vogue

Almost a year after moving to London on the DL, Rihanna has secured her spot on the cover of British Vogue—and in a historic first for the UK branch of the magazine, the star donned a durag for the cover shoot. The durag has been spotted on catwalks, red carpets, music videos and on the streets for decades, gaining popularity especially in recent years. However the piece of cloth has a tainted history of oppression, as female slaves were forced to wear them to suppress their beauty and hide their natural curly hair. British Vogue editor-in-chief Edward Enniful wrote in the May 2020 edition’s editor’s letter, “Did I ever think that I would see a durag on the cover of Vogue? No reader, I did not. Although this potent symbol of black life – of self-preservation, resistance and authenticity – has an important place in popular culture, it is rarely viewed through the prism of high fashion. Yet here we have the most aspirational and beautiful durag. How exciting.”

If you have been keeping up with the lows, and deeper lows of the COVID-19 pandemic, you’ll know that the fashion industry has been taking a large blow. The latest has hit Bangladeshi garment workers, as major retailers have cancelled or suspended billions of dollars worth of upcoming orders, with millions of workers being sent home without pay. According to Time, the Bangladesh Garment Manufacturers and Exporters Association has reported that $1.8 billion in orders have been put on hold and another $1.4 billion have been cancelled. Primark, Marks & Spencer, Tesco, Walmart and Target are among the many global companies who have cancelled orders, with most workers receiving no financial support or severance pay from the brands. H&M, Next and Zara have all said they will honour existing orders and pay the invoices in full. Over a quarter of the 4 million Bangladeshi workers have been fired or furloughed in the wake of the cancellations. “If we had not taken this action, we would be taking delivery of stock that we simply could not sell,” Primark said in a statement. So naturally, the retail giant have passed that burden to Bangladeshi workers.

The internet got hot for Margiela

Remember the days when we used to play The Sims for two reasons only: to channel our inner sadism by repeatedly drowning, burning and starving our characters; or by making a version of ourselves and our crush and making them get married. But, it’s so hard to woohoo your crush when all you have is a selection of the same bargain-bin-at-Primark tank top in 6 colours, and a pair of baggy grey jeans. As video games evolved and made customised looks more available within the technology, creatives and fashion lovers have turned to The Sims to live out their wildest high fashion dreams. Dubbed ‘Simstagrammers’, they create custom content such as outfits and looks for game’s characters that you can download and use on your own Sims—accounts such as @idsims and @skinnycleo are replicating looks from the likes of Telfar, Jean Paul Gaultier, Dior, Bottega Veneta and more. Gabriel, a Brazilian artist behind @skinnycleo, explained that “I want to live this dream in The Sims until I can experience it in the real world.” Until then, we can live vicariously through 3D-rendered versions of our wealthy, fashionable selves.

Alessandro Michele got intimate with The Sex Ed

Gucci is getting hot and heavy for season 3 of The Sex Ed, a podcast which aims to “inspire conversations around sexual wellness and explore the ways sexuality is experienced and expressed.” The third season is sponsored by Gucci and premiers on April 7, however the opening episode featuring Gucci’s creative director Alessandro Michele is available to stream now. In the hour-long broadcast, Michele reflected on how sexuality and orgasm are connected to nature and humanity, his upbringing in Rome, and how he is most attracted to people who express both their feminine and masculine energies. “I’m trying to let the people understand how complicated and beautiful our souls are, how a man can be beautiful if a man forgot everything that he learned from his mum, from society, and he really felt himself in this conversation with his femininity. And a woman must be in conversation with her masculinity. I mean, we are both,” he explained. Season 3 of The Sex Ed will include 12 episodes of guests with diverse backgrounds, from the medical industry to the adult industry. As a bonus, the illustrations and animations for this season were created in collaboration with Black Women Animate, which is a creative studio that “hires and supports black women, women of colour and non-binary people of colour.” The Sex Ed is available on all podcast streaming platforms and are all accessible on their website.