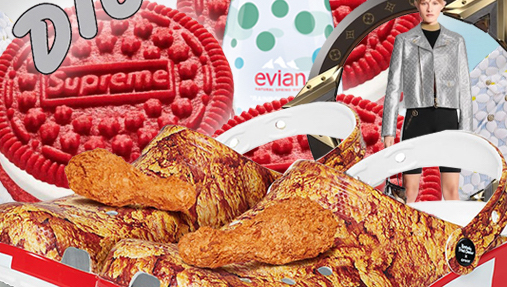 No one: …
Literally no one: …
Two brands that have either too little or too much to do with one another and have no place in collaborating on any level: Better hold your breath!!!!

I think the last time I truly felt excited for a fashion collaboration in its most colloquial sense was back in 2014, when H&M launched a collection designed by American sportswear aficionado Alexander Wang (who has since also partnered with Bvlgari, UNIQLO and Adidas—”why,” you ask? I don’t know). The all-black capsule spawned a cohesive range of neoprene sweats, body-sculpting bandage dresses, goggles, meshed hockey jerseys and logo-emblazoned boxing gloves, among other things. In terms of both look and material, the effort felt both fresh and familiar, appropriate for both Wang’s and H&M’s clientele. Wang was fourteenth in line to bring high fashion to high street, following the footsteps of Lagerfeld, McCartney, Margiela, Versace and more in doing so. It was probably the last of these mixes to actually feel thoughtful and inspired, though, with everything afterwards appearing no more, no less than labels self-fulfilling and exploiting their own clichés for a tenth of what it’d usually cost.

Fast forward a handful of years, and collaborations like these are common place. Fashion houses of all sizes, styles and price points have, in one form or another, temporarily joined forces with another brand. And while once this felt almost revolutionary, by now it merely reeks of corporate greed, with both labels aiming solely for more visibility in the other’s sales demographic. And technically, there’s nothing wrong with that. From an economic perspective, it’s very smart. And even culturally, it feels legitimate, as it adds a sense of democracy to the highly exclusive domain of designer fashion. Furthermore, the general idea of mingling aesthetics is nice as well, and can produce excellent clothing. More often than not, though, it seems that nowadays these attempts are becoming lazier by the minute—and with logo mania recently in full swing, they’re actually getting by with it sans fuss.

I believe that it was back when VETEMENTS—the Parisian collective once-headed by Balenciaga’s Demna Gvasalia—was still a thing, that collaborations outside of H&M’s annual showcase were catapulted to a whole new level of notoriety. For its spring 2017 show, the ridiculously overpriced label blew everything we thought we knew of the titular concept out of proportion. After generating clout prior for completely distorting the banal dress code—think that DHL t-shirt—Gvasalia and his team amassed an astonishing 18 contributing megabrands to breed with, many of whom’s image had little to nothing to do with runway charisma and/or the host’s aesthetics. This clusterfluck of avant-garde silhouette-exaggeration paired and the unlikely revamping of dusty day-to-days struck a chord. It would later protrude as somewhat of a climatic moment for the conceptual fashion house, as well as a re-placing on the map for names one had rarely heard of anymore, at least not in a trendy context. It came in shape of waist high, silk-coated boots made with help from shoe virtuoso Manolo Blahnik, glam-trash à la Juicy Couture or deformed Eastpaks. It would prove to be a tipping point, encouraging not only VETEMENTS themselves to keep on this path, but all of fashion and its suddenly arisen interest in joining the party.

So now, season after season it seems, we are being bombarded with numerous, uncalled for collaborations, many of which are lacklustre at best. Take, for instance, adidas’ upcoming project with Prada: Two legendary brands, equally recognisable and known far beyond their branch of trade (quite similar in status to Louis Vuitton and Supreme, to whom’s pairing I’ll get later). What could’ve and should’ve easily been a posh, stylistic juxtaposition of the famed Italian luxury casa and a German active wear iconoclast, turned out to be two of the the latter’s signature pieces, minimally edited—white Superstar-sneakers and a matching purse of some sorts. While perhaps upgraded in terms of leather quality and endurance, the design reads effortless—literally, as in effort-less, no effort—with the only visual contribution from Prada being their logo, obvs. Yawn. I love adidas and I love Prada. But come on, y’all, we know you have the money, time and creative potential to crank it up a notch.

A duo, made in Italy. @Prada for adidas Limited Edition. Available December 4th at adidas.com/prada. #Pradaforadidas

And sure, I’m aware that the more experimental you get in these gigs, the higher the risk of alienating potential customers. I mean, there’ll always be the hypebeasts that cop just about anything, so long as the product makes apparent to some degree that it is more ‘special’ than the brands’ regular, individual offerings. But to really grind gears of people with a higher standard to what they deem desirable apparel, I feel, there should be more to a collab than exchanging emblems.

I could go on and on with a list, but in doing so I’d have to probably have to distinguish firstly between the nature of these collabs—as in, do both parties even cater to fashion on the regular? Or is it like a Frankenstein of two totally different product entities? Let me quickly exemplify: Louis Vuitton taking it to the world of video games, designing skins for League Of Legends characters, or having a Final Fantasy-protagonist model a selection of season’s bests? Awesome. Virgil Abloh “designing” an Evian water bottle? Not really all that awesome. Designer Raf Simons pairing with painter Sterling Ruby? *Drooling Emoji*. Dior Homme + sculptor KAWS? = *Confused Emoji*.

At this point, it almost feels as though there are as many collaborations as there are actual, distinctive collections. So, instead of nitpicking at every single one of distant and not so distant past, I’ll conclude by zooming in on collabs that really stuck, that made sense, for whoever reads to take note, instead of shaming those that were so horribly unnecessary that I can only barely contain myself (Off-White, Nike … I’m looking at you lol. Koche x Pucci? I don’t know her. Crocs x KFC? Really? I, I just, I–).

Then again, before ending things on a positive note, I want to point out one particular history-book-worthy collab that, in my mind, fell short of the unprecedented excitement it garnered pre-release and foretold the demise of the tactic it applied.. Streetwear’s forceful penetration of high fashion’s high-brow bubble was at a peak, when Supreme and Louis Vuitton—arguably two of the best-known, most-profitable brands in their respective categories—announced the launch of a joint collection. And while the ordeal was very significant on a cultural, economic level, the clothes themselves were rather meh. Skateboarder-inspired attire, printed with a fusion of LV’s monograms and Supreme’s red boxes, on denims, sweats and leathers. Cool, but not really more interesting than what any bypasser could’ve come up with. Its message and impact were monumental, for sure, but the designs lacked depth. And this is despite the fact that Supreme are true innovators when it comes to implementing their aesthetics somewhere other than their own t-shirts or hoodies. Hell, they just dropped an OREO cookie collab?!

Despite all negativity though, a collab we very much look forward to—albeit squinting, I might add—is Telfar Clemens’ guest stint at GAP. Expected this autumn, the pieces have been told to incorporate the both’s shared belief in timeless, accessible, American ready-to-wear. Aside from a predicted batch of logo-leisure, one may also get excited for “more hype shit.” Not sure what that means, and not sure if it’s not a bit of an overstatement to call cotton basics for hundreds of dollars “super affordable.” But taking into consideration his gorgeous, most recent collection and the fact that Telfar has always thrived off of its unconventional “by the people for the people”-aura, anticipations are running high for this project.

To come to a close, and kindly remind you all of how it’s done (if you really feel like you have to do it at this point, that is): Moncler’s Genius initiative was birthed to not only grant the Italian outerwear experts more serious access into the world of high fashion, but also for extraordinary visionaries of the business to dive head first into the wonderful world of the puffer jacket—a garment that, as it turns out, is surprisingly versatile.

Successor to past talents like Valentino’s Pierpaolo Piccioli or Craig Green, JW Anderson (who’s, on that note, also worked with UNIQLO btw) and Richard Quinn—among others—sent their interpretations of Moncler’s signatures down the Milan catwalk this week. Anderson very skilfully repurposed looks from his past collections, most notably a down-filled version of those infamous ruffle-shorts from his fall 2014 menswear show. Nothing short of amazing, it was newcomer Richard Quinn though, who stole the show and had us gagging as he sent couture-quality gowns of full-body puffers, plastered in his trademark, opulent floral prints into a space capsule-esque, all-white arena. It is pure art and a true testament to what glorious achievements can be made when two seemingly too-disparate creators meet half way.

Summing up, I just want to say: Collabs can be fun, they can be cool, they can be absurdly entertaining or just easy connectors of two otherwise distant realms. But with the overflow of such cooperative releases and the fact that some brands just cannot get enough of it, it it all feels pretty bleak, exhausting even. So, hey, if you or your brand(s) are looking for a way to draw more attention to yourselves, maybe think outside of the now-vapid novelty of cOlLaBbInG. And call me if you can’t.