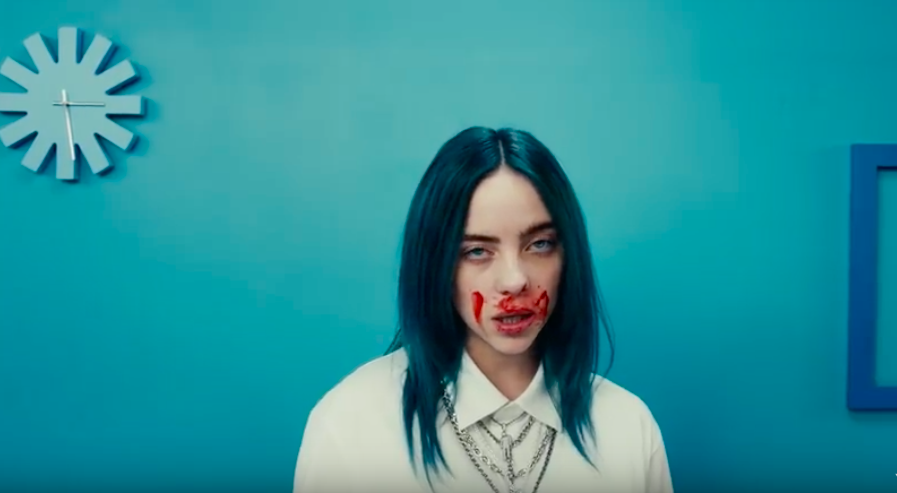 A few weeks ago, celebrity gossip pages and fashion media alike burst out in confused laughter over a dispute between goth-pop phenomenon Billie Eilish and NYLON Germany. It was after the magazine had shared their new print issue’s covers on Instagram. One of these featured a shiny, bald, humanoid creature, heavily resembling Eilish, glaring from a side angle. Shortly after the reveal, the 17-year old took to the comment section, where she expressed her dismay and anger over not only her altered appearance, but also the fact that neither she, nor anyone in her team had been informed about it, let alone been asked for permission.   Hesitant at first, NYLON removed the image after explaining in an edited caption that its only ever intention was to honour Billie, her music and seismic impact on her fans, and pop culture at large.

.@BillieEilish calls out NYLON Magazine for making a photoshopped image of her their official cover without permission from her:

“You’re gonna make a picture of me shirtless?! thats not real?? at 17? and make it the cover???? I did not consent in any way” pic.twitter.com/PHhDygYQQm

Needless to say, the execution of said attempt was far from well, and the mag ended up receiving more criticism than praise, and rightly so. For one, the cover is misleading—not only because Eilish never consented to the image in question, but also because it suggests she had anything at all to do with the magazine, which is not the case. As per usual, one would assume the person on the cover of a print medium—particularly one in the area of fashion and entertainment—to have been interviewed or at least photographed. One would assume that the person starring on the cover of a magazine was at least somehow, to some degree, involved in or associated with the medium’s content. But this was not the case.

The entire feature from which the controversial image was taken in the first place discusses the life and influence of what NYLON titles ‘Digital Prodigies’. Alongside the cyborg-like replicas of Billie Eilish, TikTok-celebs Lisa and Lena and Willow Smith, the publication quotes fans and admirers, people who feel at least one of these four young women have changed their life for a better. While in itself, this is not a particularly problematic format, Social Media still can’t grasp why oh why these futuristic avatars of internet-era-idols had to be a) in the nude, and b) hairless. Especially since all of them—with the exception of Willow, who is 18—are minors. While the world has come to understand and kind of embrace this sci-fi-esque idea of robotic sexiness à la Lil Miquela, the sheer aesthetic decisions of this article leave behind numerous question marks.

But more important than the visual worth of these images might just be the notion of whether or not Billie Eilish has a legal right to be pissed. For sure, from a politeness-point-of-view, Eilish is entitled to feel as though this is overstepping a boundary. For one, she has insisted multiple times before that she refuses to have her public persona sexualized. This may seem to counteract with some of her lyrics—think her record-breaking #1 hit ‘bad guy‘—but at the end of the day, it is her very own, very personal decision to make, and she has chosen. She’s commented on wearing baggy clothes as means to not have to deal with body image-related discourse. So, for NYLON and/or the artist they hired to ignore this is worth getting upset over.

If we’re to look at it from a legal perspective, things get trickier. In the arts, everything surrounding so-called intellectual property can become a minefield. Call-Out-Culture heavyweights Diet Prada are a prime example. If there even is such a thing here, the line is very fine between free artistic expression and misconduct. There are certainly territories in which it is easier to conclude wether or not someone is being ripped off, but all in all, it poses as a tremendously difficult topic to really keep knowledge and awareness over, even for law experts. Billie Eilish’s anger over the non-consensual cover is understandable, yet, in favour of the arts, she (currently) has no say in whether or not the image can be used, as it only “resembles” her, and has been fixed  to the point that the image’s foundation or origin are untraceable. Faces and DNA are not deliberately created, therefore they count as natural phenomena and can’t be copyrighted in the same way man-made objects can. At the same time however, forcing a legal say in the distribution of the image is possible, as it’s being used for commercial purposes, even alongside her name. But the complexity only increases when one takes into consideration that rules regarding copyright vary, depending on the country.

Just within days from each other, there have been plenty more equally head-scratchy instances of how, when and why adapting from another person’s traits is fair, and how, when and why it is not. Ariana Grande made waves in this department when news broke she was hitting fast fashion giant Forever 21 with a multimillion dollar lawsuit over a campaign and look-alike model inspired by the ‘7 rings’ music video and the singer herself, respectively. And yes, comparing imagery from both the brand’s campaign and Ariana Grande’s video, there’s no doubt Forever 21 was channelling the styles and fashions displayed in Ari’s visual, including the hiring of a model that could easily pass as the Grammy-winner’s sibling.

Grande and her team are alleging that Forever 21 financially profited off of the resemblance, and are now requesting 10 million dollars in damages. It harks back to Kim Kardashian suing GAP a few years ago, for promoting their clothes with a model that looked like her—the reality TV star accused them of trying to trick costumers into believing Kardashian was affiliated with the clothes and their distributor in an attempt to make money off of her popularity. Kardashian won, and based on the amount of proof presented by Grande’s team, it’s likely she will receive some form of compensation, be it by way of judge’s order or through an out-of-court settlement.

The Ariana Grande case spins the wheel even further though. Shortly after outlets began reporting on the issue, Drag Race alum Farrah Moan came forth with a side-by-side of her and Grande, showing the undeniable similarities between an outfit Moan wore months before the ‘7 rings’ video premiered, and the outfit Grande sported in said video. According to the drag queen, the outfit in question—a crystal-embellished corset—was custom made for her. The garment’s designer was then approached some time afterwards by Grande’s team with a picture of Moan wearing it, asking to have it remade for the singer. The tweet went viral, garnering an unexpected amount of support, further spurring conversation over mainstream celebrities stealing from minorities—in this case queer artists such as Farrah Moan herself.

Ariana should give me a cut of that 10M since her team literally sent a pic of me to the designer and paid them to copy my look from as4. (Finally met the designer and got told the Tea) I guess stealing from queer artists for profit is fine tho ‍♀️ pic.twitter.com/1smGr8K4G0

And this isn’t the first time Grande has been accused of doing such: Amid the Forever 21 controversy, the above-mentioned Diet Prada released what they say are screenshots of emails from Grande’s stylists and costume designers. The messages entail moodboards, grids of snapshots from POC women artists’ clothing, such as Rihanna and by fetish-wear designer Yeha Leung. Allegedly, they served the purpose of helping Grande’s team create her Sweetener World Tour wardrobe.

* * : If you’ve ever needed proof of Ariana Grande’s appropriation of black aesthetics (beyond the obvious), it’s all here. Multiple designers approached by her team to create costumes for the 2019 Sweetener tour have shared with us a PDF moodboard sent to them by her team. 72% of the four page document features black women as a reference (mostly Rihanna and a couple Ciara images). It also features several images of @creepyyeha ‘s distinctive made-to-measure bondagewear, which Versace – despite having bondage in their house codes as well – seemed to have replicated with minor changes. Arianators, come at us lol. • #sweetener #arianagrande #appropriation #culturalappropriation #creepyyeha #sweetenertour #popstar #musician #costumes #bondage #hardware #leather #custom #madetomeasure #madeinnyc #versace #donatellaversace #madeinitaly #pastel #pink #rihanna #badgalriri #ciara #rihannanavy #blackgirlmagic #wiwt #ootd #dietprada

There are countless other examples of how artists insist on having been stolen from aesthetically, just now Azealia Banks threw shade at FKA Twigs’ new ‘holy terrain’ visual, in a since deleted post. But the former lovingly considered it a shout-out to her 2015 music video ‘Yung Rapunxel’. But believe it or not, things can get even more bizarre: Supermodel Gigi Hadid has been sued, more than once, for copyright infringement, for posting paparazzi pictures of herself on social media. Under regular circumstances, considering her huge following and how easy, even unavoidable it is for Hadid to cash in on Instagram, it’s somewhat reasonable for the photographer to feel financially neglected, even eligible for payback. But in the case of paparazzi—who are paid by tabloids to follow and take non-consensual pictures of celebrities—this seems utterly ridiculous.

Every occurrence of ‘identity-theft’ is a matter of individuals, personal feelings, details, conditions—some of which may be more clear and more assessable in terms of justice, some less. But in all cases, it’s hard to determine who’s right and who’s wrong, what is coincidental and what is purposeful, what is inspired by versus what is copied from—it completely depends on what means have been taken prior and post creation and protection of the work, who, why, when, what for and how, in what context it and its ‘offspring’ came into existence. Unfortunately, many of the here-introduced scenarios’ outcomes rarely see the light of day. Either they simply disintegrate over time, or the parties agree on publicly undisclosed terms. It’s therefore all the more important that everyone who considers themselves an artist be cautious, most importantly when it comes to economic affairs, usage and trade of things that, whatever they may be, did not stem from the ink of your own pen. What we can learn of these feuds is: If you admire someone’s work, collaborate with them instead of imitating them. If something is in no way accessible to you, find something else that is; or create something even better yourself. You don’t wanna be—what this article’s leading lady herself would probably refer to as—a copycat.