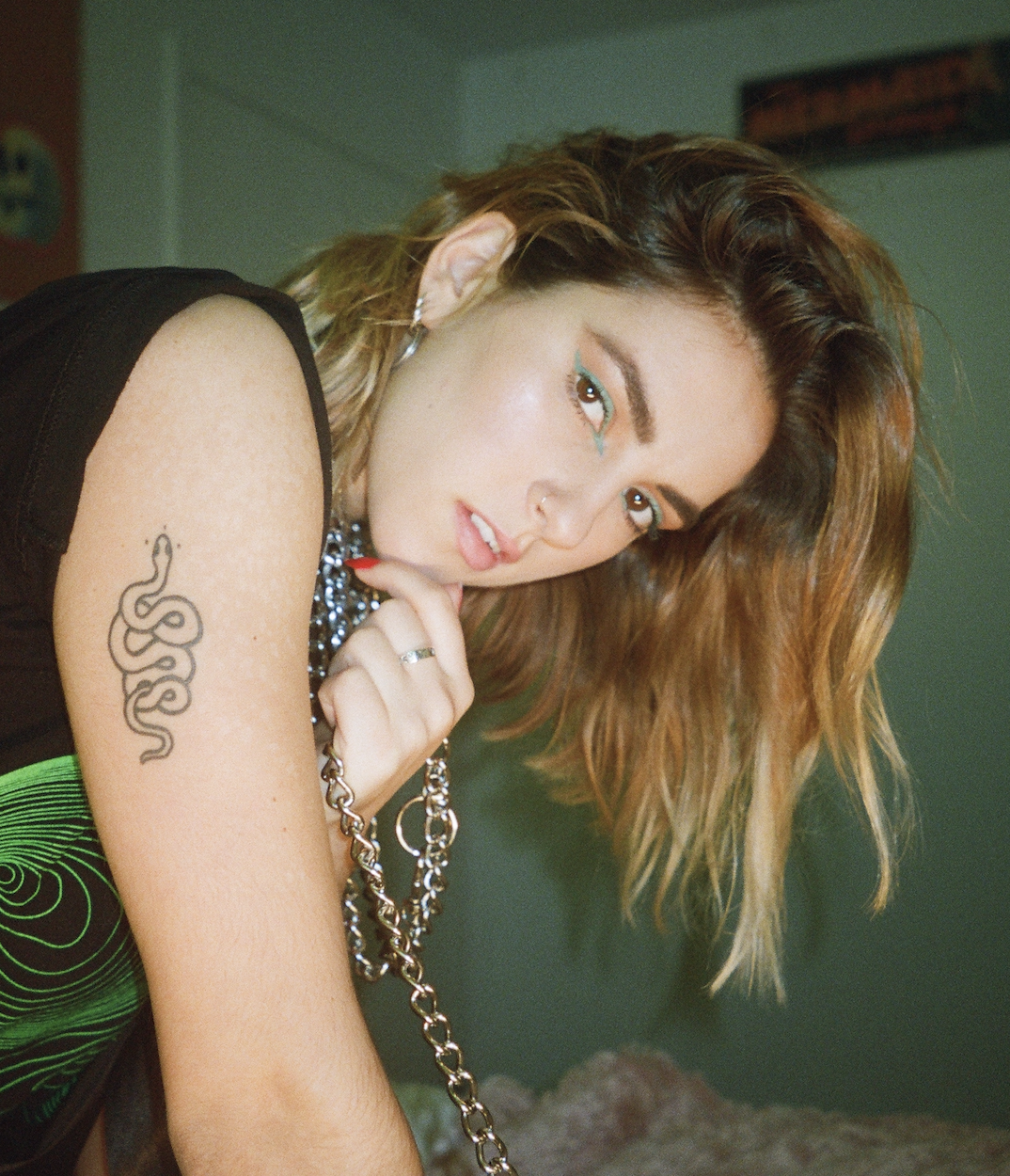 VON IS THE POP STAR CLOSING THE ORGASM GAP

What does feminism sound like? New York City based musician Von is the answer to this question. The emerging artist is a pioneer of what she calls ‘sex positive synth pop’, a genre as personal as it is political. What started as a joke about the similarities between herself and vibrators (both reliable, efficient, productive and self-serving) soon inspired the rather serious idea to collaborate, and make music together. Partnering with sex-tech company Lioness, who have created “the fitbit of vibrators”, Von began recording the contraction patterns of her orgasms in order to translate her sexual crescendo into a sonic one.

If it sounds avant-garde, that’s probably because it is. But these progressive, DIY values have always been at the core of Von’s practice. Writing, producing and engineering her own music, Von pushes the concept of the ‘one woman show’ to its fullest extent, harnessing the power of her own biology to create experimental sounds which address broader social and sexual concerns. In the spirit of her idol Grimes, Von creates music from her cave like basement apartment, where she has no cell reception, wifi or windows. Her intense focus breeds a wacky, art-pop sound that challenges the typical rules of production. In Von’s music, the bass rhythms are literally her; she is an expert in the (audio) art of the female orgasm. While her first single Action was an ode to sex with oneself, her second single premiering today on INDIE, addresses the politics of pleasure in partnerships.

Artwork by Carol Civre of Motherlode.

The hyper-contemporary Too Many is matched with lyrics that address an immensely relatable female frustration in the bedroom. “A lot of my songwriting experience has been based around looking back and reflecting on my past experiences, and figuring out what aided in my growth and also what perpetuated that suppression”. The song confronts the profundity of the “orgasm gap” in heterosexual relationships, aka the disparity between how often women and men cum during sex. Even in 2018, female satisfaction often remains unaddressed. Scientific studies have shown that approximately 75% of women have faked an orgasm in their lifetime, and roughly 82% of women cannot reach climax from penetration alone. Von says that Too Many is about her history of sexual experiences in which her “pleasure was not even a part of the equation”. The song, she explains, harnesses her frustration with partners who have gaslighted or shamed her for “expecting something in return” during their sexual exchanges. Savage lyrics like, “Calling me crazy/ you and your friends got nicknames too, no’s and maybe’s” and “Word in my circle, you’re not what you eat but what you refuse” call out the selfish lovers that so many women have encountered. Von’s song encourages much needed sassy protest, but the musician herself also questions why the gap still exists today.

Hailing from what she describes as a “traditional, rather than conservative” slavic, catholic family in small-town Pennsylvania, Von grew up in an environment where sexuality, and specifically female sexuality, was unaddressed. “I was so uncomfortable as a teenager. I was the last person to talk about sexuality or anatomy, I found it shameful and weird,” she remembers. “Even when those conversations happened I didn’t participate. It created a lack of literacy for me.” Insufficient sex ed and lack of communication breed, not just for Von but for every sexual being, unfruitful experiences. But female pleasure remains chronically unaddressed. “You don’t know how to talk about what you like or don’t like, and maybe you don’t even know the answer,” Von explains. “Because you’ve never been told your pleasure should be a priority. And on the flip side, there’s no inquiry.” Leaving her humble Pennsylvania hometown for New York City (and NYU) as a teenager, Von, like so many others who seek out the open minds that often accompany big city lights, found that her relationship with her body and sexuality developed alongside her sound. But it was months spent in Berlin that truly solidified sexual and sonic confidence. 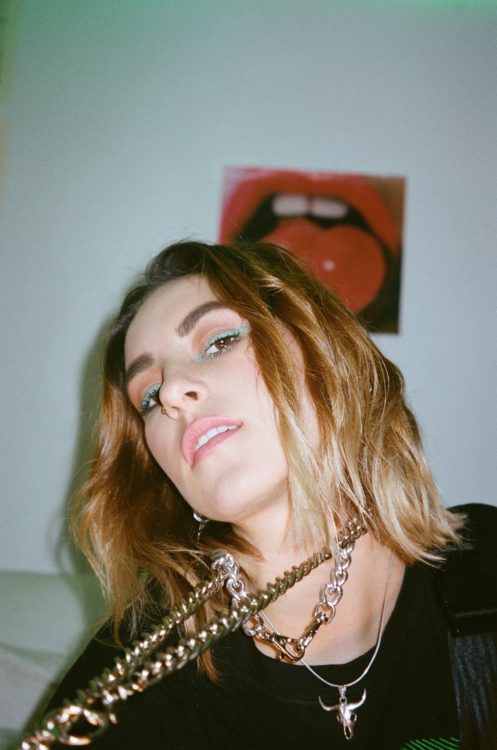 Free from the commercial and capitalist drive that necessarily accompanies surviving as an artist in New York, Von found herself freer from judgement in Berlin, and allowed herself to move in a more avant garden direction. “I finally didn’t have to think about release strategy or streaming platforms or more broadly, whether or not people would be perceptive to these clashing instruments and soundscapes. I began experimenting because I gained the confidence to do so,” Von explains. Rather poetically, her musical and sexual awakenings aligned; Von reaped the best possible lessons from the incomparable liberties of Berlin nightlife. Her experiences around in the unabashedly sexual atmospheres of Berlin’s underground helped heal underlying feelings of discomfort and shame around her own desire and anatomy. “I felt so much more comfortable naked in a sex club in Berlin than I did fully clothed in any space in New York, and that was so wild to me”, says Von.

Celebrating the female orgasm, which sadly in 2018 is still for many, profoundly misunderstood and elusive, means confronting taboos head on. And as is the case with any other righteous feminist mission, part of Von’s music career will be dealing with a barrage of sexist clap back (she’s been accused online of being vulgar and disgusting) from the foot soldiers of the patriarchy. Von is still a student at NYU Clive, meaning she’s presenting her work to professors and fellow classmates on a regular basis. Although she loves Clive, there’s a notable disparity of diversity in staff. “Normally the people who I’m talking to about orgasm music are a bunch of old white dudes. It’s a really good exercise for me to explain to someone who isn’t going to get my music why it’s important, and to talk with people who have a high probability of being turned off by it”, explains Von. In the dawn of the #metoo era, creating music that defiantly aligns itself with the female experience resonates more than ever. For Von, Too Many is so much more than a track, it’s one component of a much bigger motive. Beyond the sheer wow factor of creating pop music from the female climax, her music aims to bring female sexuality to the forefront of the conversation. Von explains, “I’m so happy that my creative outlet can coincide with a bigger goal I have for myself, for public school systems and for society”.

Listen to Too Many here first.