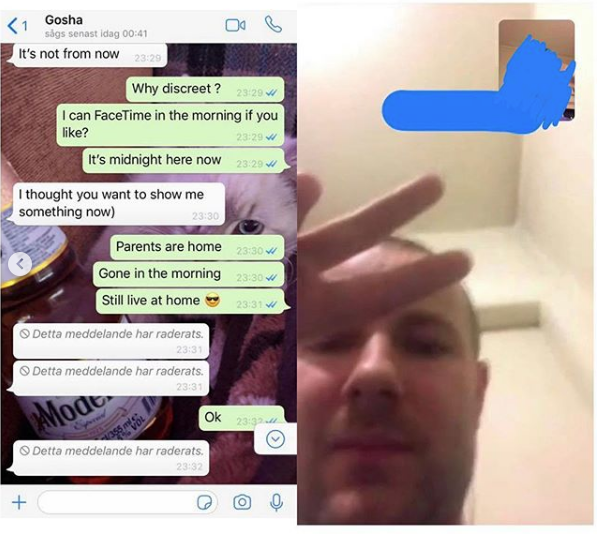 Georgiy Aleksandrovich Rubchinskiy, better known as Gosha, has found himself the subject of scandal yet again, as messages surfaced yesterday appearing to show the Russian designer soliciting sexual content from two different minors. Purveyors of fashion fairness @dietprada, posted screenshots of messages purported to be from Rubchinskiy’s verified Instagram account, as well as his WhatsApp, showing the exchange between the 34-year-old Russian designer and a 16-year-old boy. The conversation sees Rubchinskiy asking the boy to send him pictures for a prospective modelling opportunity, and later to FaceTime him “from the bathroom”.

A later post, uploaded to High Fashion Talk Group and shared on Diet Prada’s story, are reported to be from a second victim, also under 18, and appear to show the designer asking the underage boy to send him graphic photographs. One message visibly reads “it’s ok if little hard”. The boy claims Rubchinskiy used the ‘unsend message’ function to remove more inappropriate requests from the conversation.

While the validity of these screenshots is yet to be established, all of the posts from the Gosha Rubchinskiy Instagram account have been deleted, and Rubchinskiy representatives maintain that the conversation was not sexual, but merely protocol for a street casting. Members of Rubchinskiy’s team issued the following statement to Hypebeast last night:

“This was a street casting for a look book shoot. The person sent a direct mail to us asking to be considered for the casting. This happens all the time. We have been doing street casting for shows and look books for many years now. We will be going to London to cast the look book next week. Gosha did a face time with him and then he asked for a photo to have on file with all the others. The person said he wasn’t alone and couldn’t take photo so Gosha suggested he just quickly goes to the bathroom and take a quick photo on the mirror, so he could show the rest of the team and have it on file. This exchange as depicted on the Instagram post of Supreme leaks news has been altered and taken out of context. It is clear there has been modifications and deletions to make it look bad where in fact it was a simple request for a photo to facilitate the street casting. The person started contacting us very often demanding an answer about the casting and became a bit weird. So Gosha blocked him and we think this is why the person is trying to make Gosha look bad, and turn what was a totally innocent street casting look something that it was not. We have been doing such direct street casting for ten years and we have never had such a problem, therefore this is invalid.”

Another victim is telling us that Gosha sent him these messages in October. Some of the messages were unsent by Gosha which we are being told were asking him to send photos without underwear. @gosharubchinskiy

While it’s no secret that Rubchinskiy has used Instagram to find models before, the apparent casting process outlined by this statement, playing out in the DM inbox of several minors, does not exactly strike as industry standard. More Facebook posts shared on Diet Prada’s story today discuss Rubchinskiy’s apparent fetishisation of young boys, with one anonymous user claiming the designer told him he would be more “fuckable” if he looked younger. “I was 16 at the time!” he adds. Another user claims he received messages from Rubchinskiy over flickr when he was just 15.

Though the screenshots have not been verified, these instances are not the first time the Russian designer finds himself the subject of controversy. From questionable politics to a 0% model of color ratio in his AW18 runway last year, Rubchinskiy has had to fight off allegations before, and it looks like that won’t be stopping here.