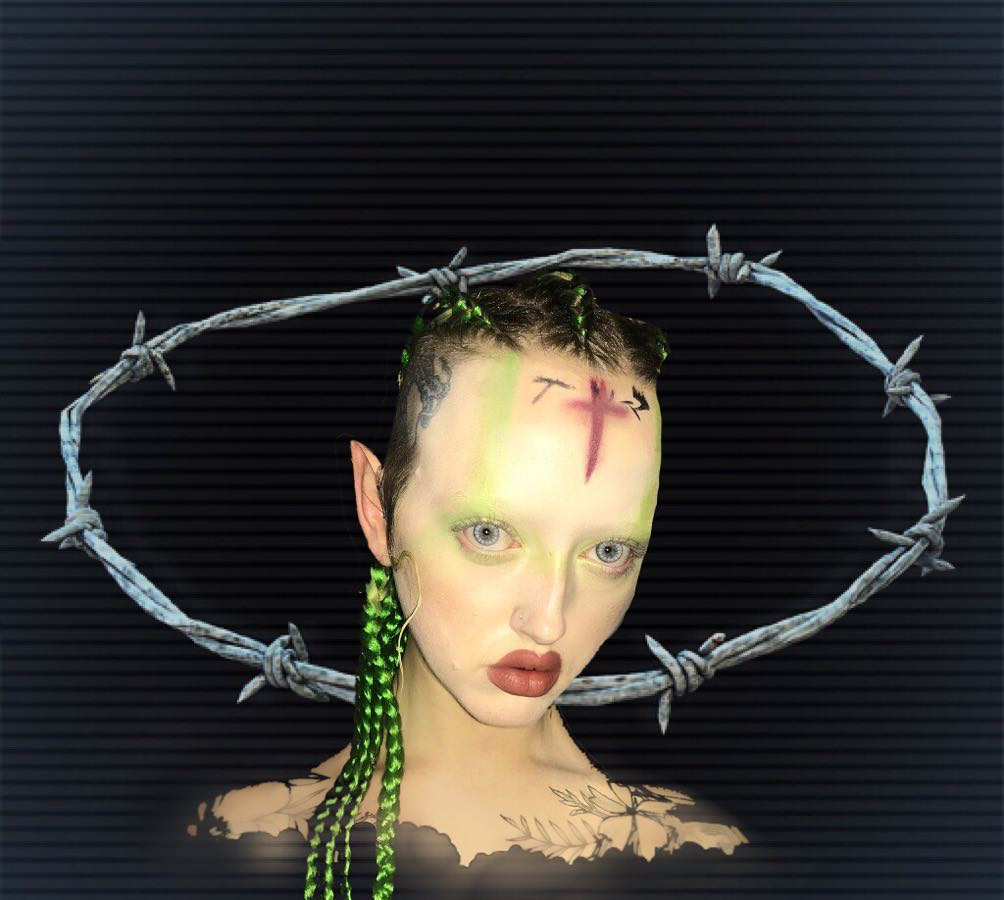 INSTAGRAM’S ALIEN ENTITIES ARE THE MANIFESTATION OF MILLENNIAL PUNK

In the sizzling summer of ’76, as the sun blazed across Europe, Britain catapulted towards an economic and political abyss. The Sex Pistols performed at Manchester Free Trade Hall and the Pistols, the Clash and the Buzzcocks enraptured those watching at Islington’s Screen On the Green. Punk erupted onto the scene, a subculture that experimented with transgressive looks and subverting traditional standards of beauty. Now, as this year’s heatwave dissipates into cold wintery days, the world still suffers from political unrest. Britain speeds painfully towards a post-Brexit reality, far-right movements are on the rise, and subculture continues to act out in response.

One such subculture is the trans- or post-human phenomenon that’s seeing seemingly alien bodies plastered over our Instagram feeds. In a movement dubbed “Alien Beauty”, trendsetters are resisting oppression, boundaries and walls, and exploring a non-gendered existence that manifests through alien forms.

Fashion duo Fecal Matter stand at the forefront of this movement. Their gothic, extraterrestrial beauty, shaved heads and prosthetic skin-heels provoke a conversation about the meaning of “ugly”. But it was only once I’d witnessed Fecal Matter’s SS19 collection at the Mandrake Hotel that I felt the real emotional weight of their work. Freakish figures walked the runway to a haunting soundtrack; their makeup, chains and black leather clothing mirroring the pain in their expressions, several wavering in needle-thin heels. The show was a vehement rejection of suffocatingly restrictive Western ideals of beauty — the torment of societal expectations reverberated around the hotel’s foyer, and was met by a determined struggle to tear away.

A driving factor behind this new alien glamour is the desire to subvert, not only gender binaries, but sex and “humanness” itself. These creatives are not only frustrated by the constrictions of sexuality but also humanity. Hatti Rees, better known by the moniker Aunt Petunias Friendz, informs INDIE, “I want to achieve complete fluidity. I want to achieve this point in the future where it’s not strange to be a boy one day and a woman the next, or perhaps even an alien on the weekend”.

Rees is the modern-day iteration of Woolf’s Orlando, their gender changes with the week. They live out a variety of alter egos each day, dependent on mood. Rees’ ability to move between personas directly opposes the singular vision that the world has for “women”. Whether it’s “Gutter Girl” or “Rusty”, “Aunt Petunia” or “Luna”, these characters need to be lived, seen and heard through the artist.

Inspired by Tim Burton, dark comedy and their eccentric family, Rees’ creativity aims to provoke. At points, the alter-egos have three eyes or pixie ears and bloodied breasts. “Hate gives me energy, and that helps me to create”, they comment. They channel a kind-of fantasy world, a dystopian parallel universe where ugliness and contradictory colours instead create a beautiful, visual sumptuousness.

And this abstract concept of beauty is pushed even further through the use of technology, which pushes these creatives even further onto the cusp of reality, stretching the boundaries of reality.  The 163K-followed Salvia, uses Photoshop to digitally manipulate her body into otherwordly creatures characterised by pale flesh and distorted features. The process enables the artist to reach her most authentic self — in a way Punks never had the opportunity. Her flesh-coloured bodily distortions, white eyelashes, and painted dots align her closer to a butterfly than human. The result is an otherworldly prediction of a future, androgynous life-form. It suggests an end that we could all achieve, one where we build ourselves into who we want to be regardless of how we were born, with digital enhancements as a guide.

Narrow Western “norms” have made little room for those who do not exist within the boundaries: the irrational woman and the non-binary, for example. Rees shines the spotlight on these figures, re-living the “forgotten women” that they’ve experienced in their past. “I am inspired by my eccentric relations who would not be remembered if it weren’t for me”, they tell us. “My nanny who was a hoarder, my aunt who wears a feather boa and has a croquet lawn, my Grandma’s sister who was anorexic and Grandma who had a pet elephant. They each have shaped my art.”

These artists do not want categorisations or definitions to exist; they push against walls that are becoming ever restrictive and provoke us into questioning the meaning of beauty and personhood. Each is reimagining the shape the human form can take, and we hope their predictions will come into full realisation.