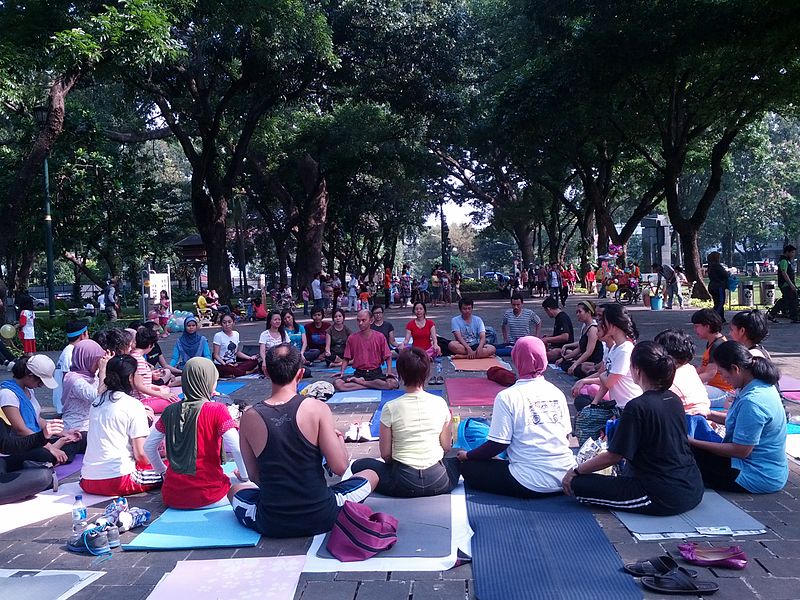 WHY ARE SO MANY MILLENNIALS TURNING TO MEDITATION?

Some might say it’s a vapid endeavour; a fad fitting to our so-called millennial mindset. But could meditation be an antidote to 21st-century anxiety?

Meditation is having a moment. Once a spiritual practice associated with the ‘hippies’ and Eastern religion, it has now been embraced by the mainstream — at least among millennials. Conflated with ‘mindfulness’ by some, or treated casually as a means of unwinding, the practice originated in India roughly five thousand years ago, and it took until the 20th century for its tenets to gain traction in the West. Bizarrely, The Beatles were partly responsible. In 1968, they travelled to northern India to meet guru and master in transcendental meditation, Maharishi Mahesh Yogi. John Lennon explained, “The youth of today are really looking for some answers — for proper answers the established church can’t give them, their parents can’t give them, material things can’t give them.”

In Hindu faith, meditation was originally thought to narrow the gap between humans and a higher being; in Buddhism it’s a tool used to reconnect to the present. Nowadays, meditation in its myriad forms might be popular among modern youth, but with its roots in ancient religion, it’s far from an authentically Western pursuit.

In March this year, six-part docuseries Wild Wild Country shot to the top of Netflix’s ‘most popular’ list. The series focuses on a kind of active meditation developed by guru Bhagwan Shree Rajneesh (or ‘Osho’), and adopted by disillusioned Westerners in the 1980s. It follows the spiritual community-turned-cult’s relocation from India to small-town America, and the butterfly effect of this move. The overwhelming impression is of a distorted mindset cultivated by the dogma’s naïve followers, but despite the unflattering portrayal, the juxtaposition between the orange-clad hippies and the conservative Oregon-natives attests to the historical view of spirituality within mainstream society as ‘other’. So why the appeal in 2018?

Youth today is increasingly secular; it’s hardly the case that the masses have turned to Buddhism in unison. Meditation’s place in the mainstream isn’t a product of new found spirituality, but of necessity. To refer to anxiety as an epidemic is barely an exaggeration — roughly 260 million people worldwide today suffer from an anxiety disorder. In February, a mental health study found that young adults (aged 18-25) spend over six hours each day feeling ‘stressed out’. Sometimes it seems almost every aspect of the modern age exists purely to stress us out — leaving us fretting, losing sleep or entering into a collective existential crisis. But perhaps the biggest game-changer/anxiety-inducer isn’t Trump, but social media.

While it serves a somewhat useful purpose, social media plagues of millennials and Gen Z-ers alike in a subtle yet insidious way. When you break it down, it makes sense how meditation directly counteracts the stressful effects of online platforms. It embodies thoughtfulness and promotes a slower pace of life when the internet does the opposite. We’re constantly fed information, encouraged to multi-task and subscribe to an ‘on demand’ mentality. Meditation gives us something tangible, grounded in reality – a far cry from the pixels we’re fed through a screen each day.

But herein lies the paradox. Meditation can be used to combat some of the stress caused by disappointing Facebook performance, or the ineffectiveness of ‘likeforlike’ Instagram hashtags – yet these sites are exactly who to credit with its widespread rediscovery. On the latter platform, ‘#meditation’ has been used almost twenty million times, ‘#mindfulness’ comes in at just under ten million. Careers have been built on the mindful movement – there’s an entire industry churning out self-help books; we can meditate from our homes under the guidance of a monetised YouTube video. Tatjana Mesar, a meditation instructor who teaches from the studio she founded in Berlin, says that a lot of the young people who attend her classes were introduced to mindfulness through an app. As of September, Headspace has been downloaded 31 million times.

Let’s face it: millennials perpetuate some ridiculous internet trends – from glitter eyebrows to rainbow bagels to ‘dog or food?’ collages. In comparison, the obsession with mindfulness is refreshingly sensible. But like these other trends, it can be hard to tell when the sentiment behind it is genuine. Once everyone is seen taking part in something, it’s tempting to join in. But it’s worth asking the question: can so many people really love avocado on toast this much? And is it just a coincidence that all these ‘influencers’ have simultaneously discovered yoga?

Of course it’s not. The truth is, self-care is trending. ‘Self-care’ is an umbrella term for steps one might take to improve themselves: from clean eating to adult colouring books to bullet journaling. Lately, it seems like everyone is trying to improve themselves. But the ingenuity behind some of the self-care input circulating the web shouldn’t discredit the value of meditation. Tatjana Mesar’s Zen method encourages participants to “feel more at home in your body and more mentally calm and present in daily life.” The state of relaxation achieved in meditating can be applied to everyday annoyances. Mesar agrees that “we’re all overstimulated through the use of technology and the amount of information we are digesting, or trying to digest.”

So, those who continue to reduce meditation to a millennial trend – just take a look at its effect. Further, consider why its effect is so needed. The urgent move to self-reflect, self-improve, self-care says something worth listening to about the mentality of younger generations. Around fifty percent of attendee’s to Mesar’s classes are under 30; obviously meditation is meeting some need implicit in youth at large. While it may have strayed from its original context to a virtual alternative, the benefits of meditation are universally valuable.