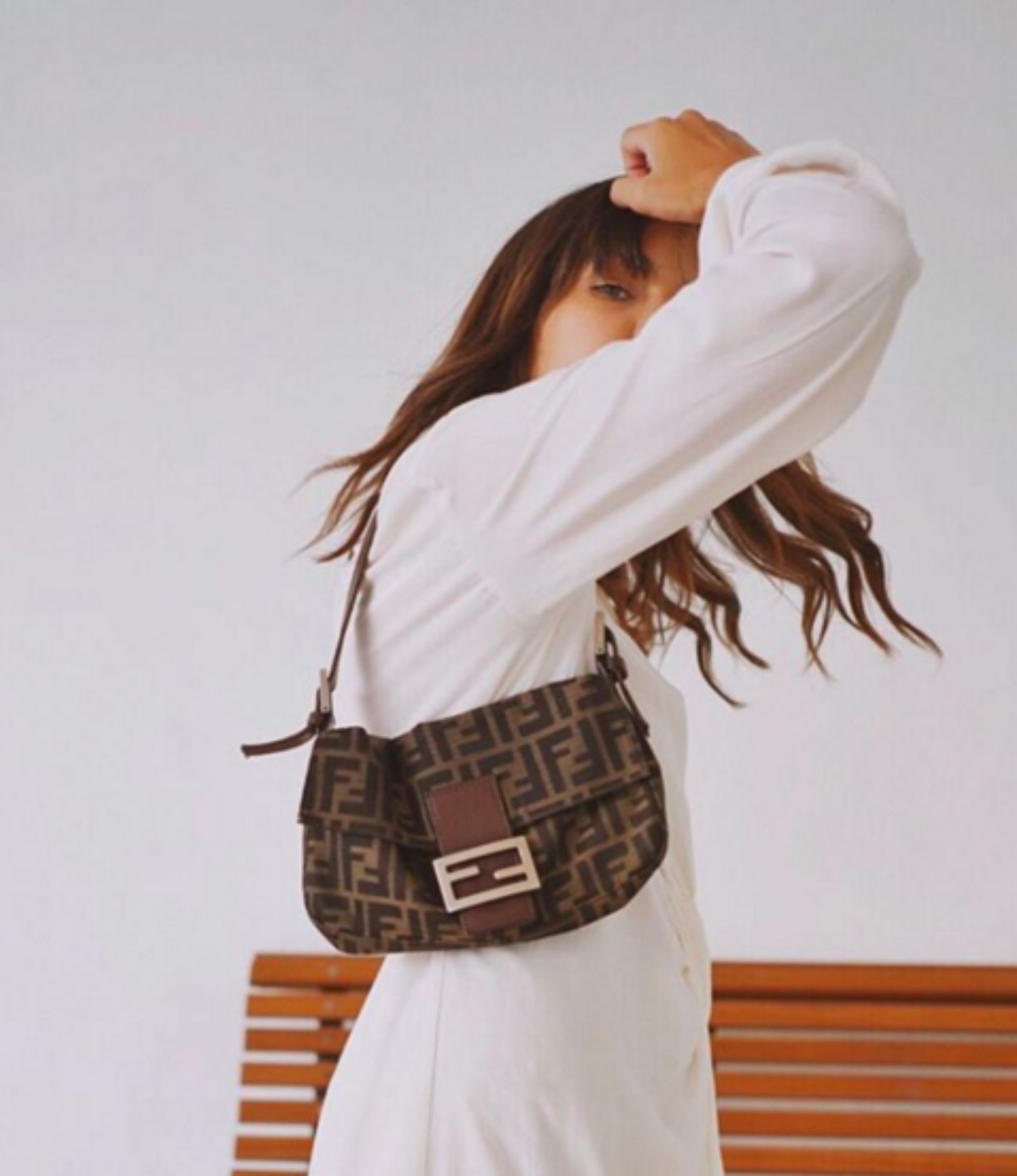 When Silvia Venturini Fendi first suggested to create a little bag that could be carried around like the famous French bakery goods, the reactions at the Fendi headquarters were rather cautious – Fendi’s colleagues were suestioning its small size and appeal to the consumer as bigger bags like the PRADA Nylon Backpack were leading the market at the time. But Silvia Fendi kept on advocating her vision, and so in 1997 the Baguette Bag was released. Each of the purses came with a small strap and the double Fs, the infamous Fendi logo. The designer’s aim was to step away from any basic design, deliberately refusing to conform to the other bags on the market, complaining that they all looked the same.

To avoid any kind of repetitiveness, the Baguette Bag’s iconic design and shape came in many different patterns and colours, ranging from colourful, sequin-scattered versions to reptile prints and furry logo-mania ‘Baguettes’. And the fashion crowd bit into it. Fendi’s creation became the first bag to induce waiting lists at all the big department stores – One could even say it started the era of the It Bag.

And one could not write fashion history in the nineties and noughties without an appearance on Sex and the City – luckily, the Baguette bag had more than one show-stopping moment. Remember when Carrie was mugged on the streets, desperately claiming her purse wasn’t simply ‘a bag’, but a ‘Baguette’? Or the now famous scene at the Playboy mansion when Samantha’s Fendi knock-off gets stolen and she blames a Playboy bunny to have taken it? These remarkable moments did not only contribute to Fendi’s fame, but also distinctly underlined the show’s storyline of four women who rather pay for designer fashion than their rent.

Like a real icon, the Baguette also has its own book. The coffee table book that carries the name of its protagonist showcases the story of its now two-decade-long history. It also features photographs of the most famous representatives like the ones in collaboration with artists Damien Hirst, Richard Prince or Jeff Koons. Accompanied by illustrations and even a poem dedicated to its charm by Japanese writer Banana Yoshimoto, the “biography” offers a deeper look inside the first It-Bag’s exciting story.

For all of those who are still skeptical about the purse, worrying that their sandwich might not fit into their Baguette, Fendi released the ‘Mama’. Its shape and format inspired by its daughter, the ‘Mama’ is more of a tote bag version of the original. And Fendi’s creativity did not stop here – having already once taken inspiration from the French’s Boulangerie counter, the ‘Croissant’ was the next logical step. The tiny purse does not only look like its name giver, it also translates the original croissant’s characteristic of being seductively delicious but never quite satisfying into fashion: a fashionable showstopper but highly impractical.

It seems like more and more former “It”-Bags are here to stay, celebrating their comebacks on the fashion crowds’ arms, and the Baguette is no exception. At Fendi’s Spring/Summer 2019 runway show in Milan, the famous purse was showcased in a new outfit – heavily embroidered with colourful stitching and hippie-esque details – making it fit seamlessly into the bohemian vibe of the whole collection. Which proves, once again, that we should not be too hasty when sorting out our closets.

DESIGNER,   FASHION,   FEATURE,   THE EVOLUTION OF
Loading next Article