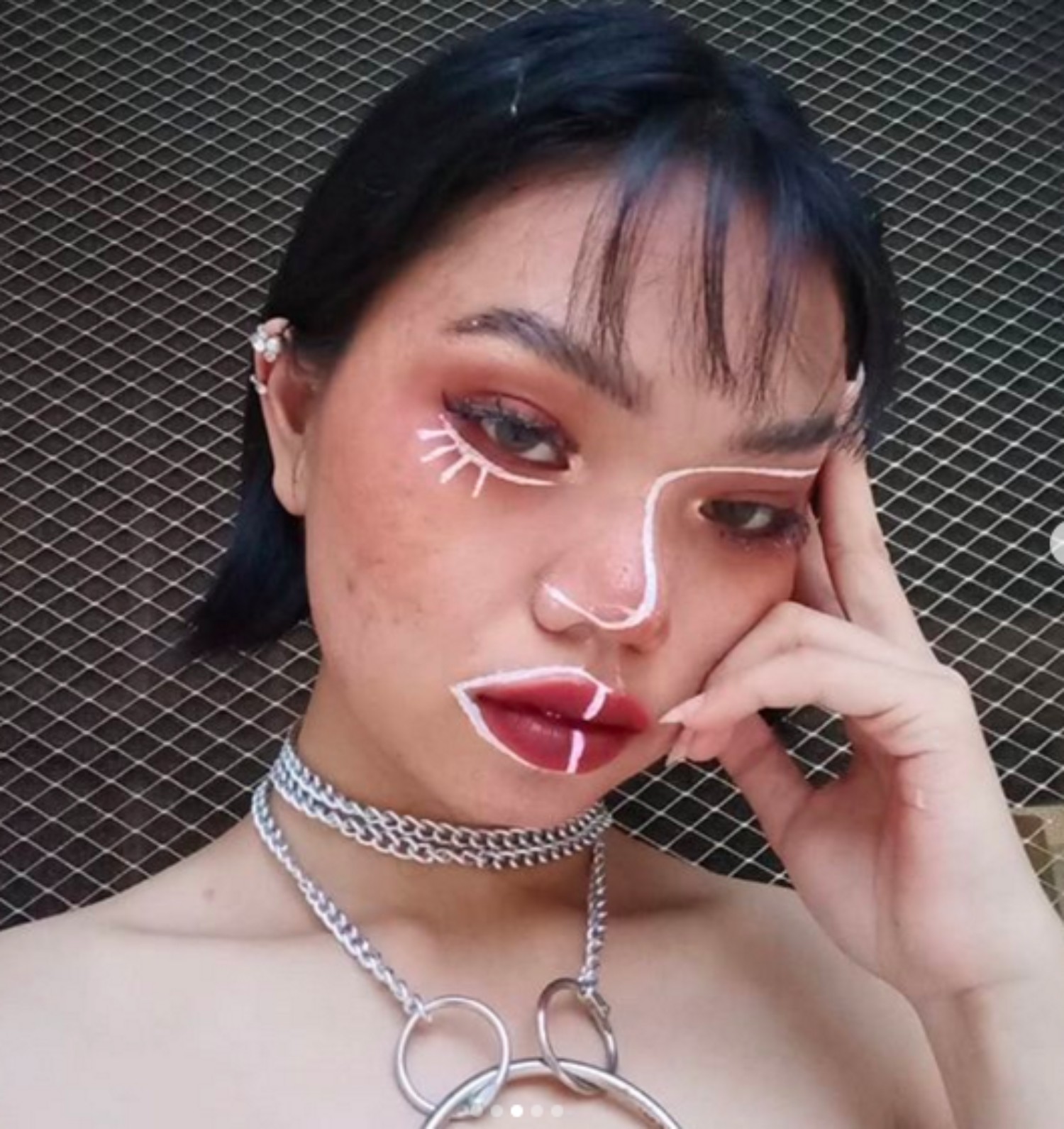 IF 2018 IS THE YEAR OF MAKE-UP, WHERE IS THE ACNE-ACCEPTANCE MOVEMENT HEADING?

Although body-positive beauty messages are arriving in mainstream media more and more, there unfortunately still are some parts that are neglected by this movement. Skin issues and especially acne have for long not been perceived as very “marketable” or “popular” topics, but rather as something most people just want to get rid of – favourably in secret. However, with most people suffering from acne or skin issues, especially in their teenage years, acne is not a rare phenomenon but reality for many. And so, a new solidarity movement has formed that aims to make it easier for everyone who suffers from bad skin to gain back their confidence while also hoping to find more respect and acceptance within society itself. With 2018 arguably beeing the year of inclusive make-up, we asked everyone from the few in the spotlight to your average Instagram user how, and if this alleged visibility around acne has actually changed something for them.

By using social media and the internet as platforms to spread positive messages, new voices have long opened up about the topic, making it increasingly visible. One of them is British YouTuber Em Ford who already in 2015 released a video called “You look disgusting“, in which she shows her make-up-free face, covered with acne. The footage is accompanied by real comments she got from her viewers that all refer to the state of her skin and how “ugly“ she looks. What follows is a sequence in which she covers her face with make-up, and now the comments start to become more positive, telling her how beautiful she is, just to then turn into the ones that tell her she is “all fake“.

It’s a powerful statement, emphasising the notion that one will never be able to make everyone happy and that, in times of photoshop and camouflaging make-up, the lines between reality and make-believe get increasingly blurred.

At the time, Em’s video was a very important contribution to the now rapidly growing skin positivity movement. Not only do young men and women post photos openly showing their skin issues under the hashtags #skinpositivity and #acneacceptance on Instagram, but celebrities like Justin Bieber are equally embracing their skin in their Instagram-Stories.

However, away from these very visible acne acceptance fighters, living with the skin condition is still not easy. “Having severe acne has given me a much deeper understanding of alienation,” explains P., 23, from Wales. Under his username mynameisjustp he posts images of himself and his acne on Instagram – alongside advice and his experiences with possible cures. “People stare at my face a lot,” he says. “Strangers have said some very hurtful, judgemental, and just plain ignorant things about my skin. When it was at its worst I couldn’t walk down a busy supermarket aisle without everyone stopping to gawk at my face.“ Just like a lot of others, he describes the stigmatisation and prejudices that still orbit having acne. People then like to give advice like “simply change your diet” or “just wash your face more often”, in line with the often still common understanding that having acne equals not eating healthy or being unclean. He states: “People need to know acne has been around forever and is present all over the world. They need to know it has nothing to do with hygiene. They need to know skin disorders don’t even come into the equation of what makes a human being beautiful, and they need to see visual representation of people living with acne and being totally ok anyway.“

Sharrie Gail is another Instagram user who has posted a photo of herself without retouching her skin on her account. At first, she was afraid of the possible negative reactions, she tells us, but the comments she received were for the most part positive. “I feel the need to spread this concept in social media where icons reside and dictate the current aesthetic because a positive method of influencing people actually exists. Instead of pressuring people to look a certain way that doesn’t apply to everyone, diverse beauty should be celebrated,” she says about her photo.

Another crucial aspect in the rising discourse around acne is the relation of the pressure of having clear skin and a certain social hierarchy which dictates that only “beautiful and flawless“ people have a shot at success – an issue the YouTuber ceedling talks about in her video “The pressure to have clear skin is a Feminist issue“. She says that acne is not represented in mainstream media and if it comes up, then only as something “Geeks” or outcasts suffer from. A portrayal that is so narrow and superficial keeps on reinforcing the prejudices surrounding acne.

Moreover, it is not only the outside of a person that is affected – recent studies have shown that acne and depression are very much linked. Researchers compared a large amount of information from a British health database and found that the risk to suffer from depression within one year of the diagnosis was 63% higher for patients with acne than for the ones without. It has to be noted that acne itself is not dangerous for your health, but in our superficiality-focused world, having an appearance that is not within the spectrum of what is considered normal can become dangerous in its own way.

There are thousands of videos and products on the internet that promise a quick cure from skin problems, advertisements for acne products similarly often depict that the solution is quite simple. “These spots or images often feature people washing their faces, which only enforces this false belief that acne comes from not washing your face properly to begin with. And I’ve yet to see an advertisement for acne treating products showing anyone without flawless skin“, P. from Wales notes. Most of the sufferes have already tried every possible product and for those who couldn’t find a cure from the drug store shelf, a visit to the dermatologist often is the next step – which does not necessarily make the treatment of acne easier.

One of the most prescribed drugs against severe acne is Accutane, which did help a lot of people – but the price you have to pay for clear skin is high. Ceedling states in her video that a visit to the dermatologist is often linked to high doctor’s fees that not everyone can pay for – or has the health insurance that pays for it. It, again, creates a gap between those who have the means for clear skin and the ones who simply can‘t afford it. Next to the literal costs are the side effects of the medicine. Accutane, that works with the substance Isoretinoin, comes with a lot of these and is strictly forbidden to be taken while pregnant. The side effects range from very dry skin and lips or joint pain to the increased anxiety, depression or dry eyes to the point that you cannot open them anymore. Another commonly prescribed medication is the birth control pill. Anna, an Instagram user from Germany who has posted selfies under the hashtag #acneacceptance, however started to get worse skin after taking the pill. “I haven‘t taken birth control for two years now, my skin got really bad,” she explains. “So I went to my doctor and she told me that the only way for me to clear up my skin would be to take the pill again. I didn‘t do so, but fortunately, my hormones have started to find balance recently and I am better now.“

Unlike movements that celebrate curvy women, freckles or Vitiligo, the skin positivity movement is more about accepting acne every step of the way. It is okay to work towards a better skin, but it is important to have the feeling that you are not alone and that the way towards improvement is not plastered with too many obstacles. Which can only happen by making different skin conditions more visible to the world – and it is proven that the more we see something the more we get used to it. Still, we need to keep in mind that just because we see something on Instgram it doesn’t automatically mirror itself in the consciousness of the mainstream. However many followers someone might have, there still is an incredibly big offline percentage of people that have never even heard of the acne acceptance movement. So, just because someone within our Instagram-bubble posts a selfie with acne, does not mean the goal of accepting skin however it might look like is reached.

Or, as Sharrie’s puts it: “There is so much to do in this world other than to frustrate ourselves into clearing our skin. That’s usually way beyond our control and that shouldn’t stop us from feeling like our best selves.“