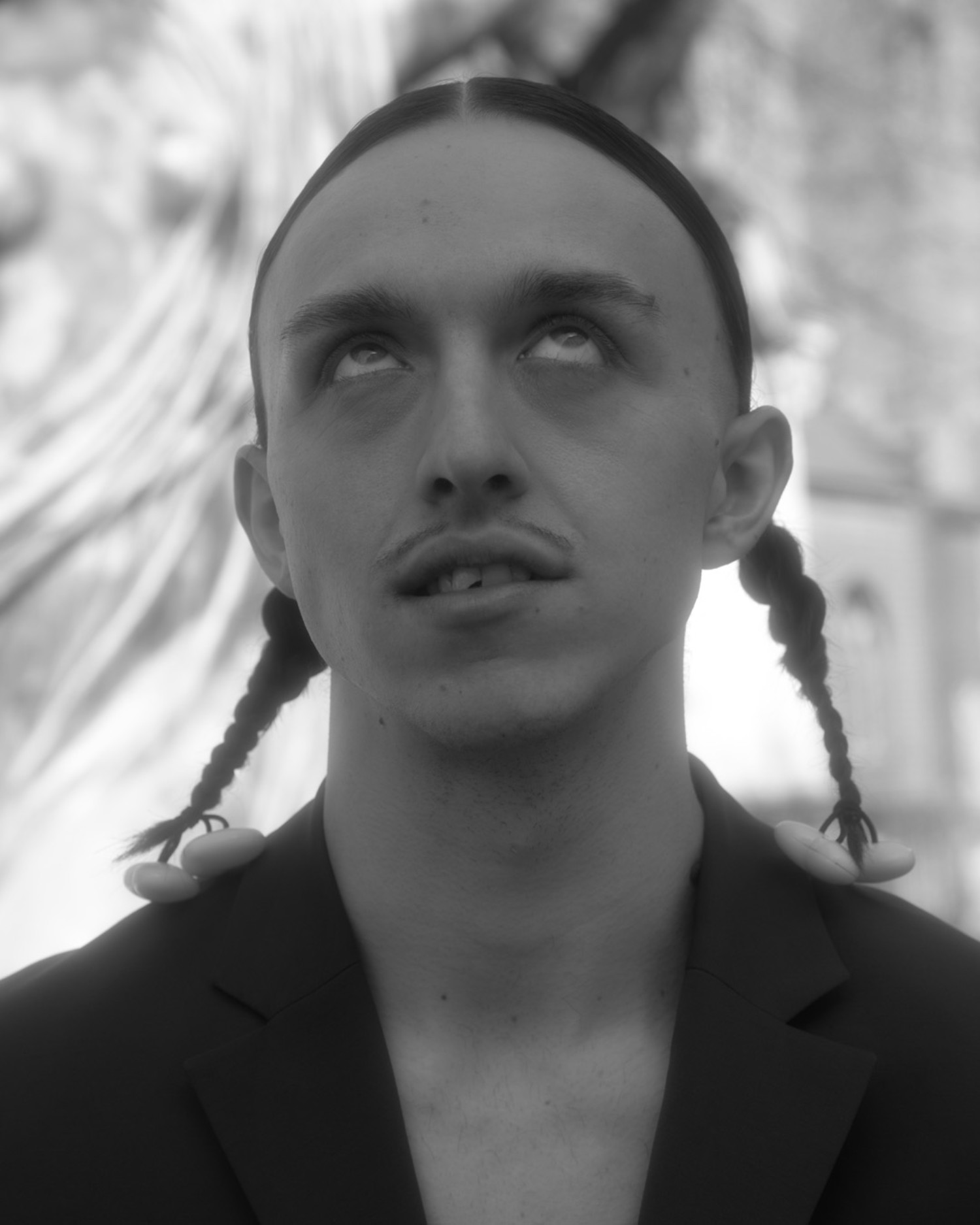 Tomas Tammemets hated growing up in Estonia. In the middle of nowhere, where nothing was happening. Being raised in a poor neighbourhood in Tallinn right after the breakdown of the USSR, he was confronted with human abysses manifested as heavy drug abuse and inferior living conditions from an early age onwards. Even though—orprecisely because—he always felt like an outsider, he learned how to channel his ambitions and found creativity in the isolation. He learned how to express himself through painting, dancing and eventually music: Tomas Tammemets became TOMM¥ €A$H.

Introduced to hip-hop, as well as the gabba and witch house scenes, his music style breaks with all convention and genre boundaries since the release of his debut album Euroz Dollaz Yeniz in 2014. It’s unpredictable. As unpredictable as his visual language which has evolved to become a ground-breaking power force which creates surreal yet humorous depictions of his askew imagination, garnering millions of views on YouTube. Today the 26-year-old works closely with avant-garde pop label PC Music and can even add a satirical line of apparel to his resumé. INDIE spoke to the self-proclaimed breakfast-lover when he brought his almost sold-out tour to Berlin.

The only person you follow on Instagram is Rick Owens—why is that?
We were in Paris and he messaged me, in all capitals, “HEY GUYS COME TO HAVE DINNER WITH US IN THE EVENING IF YOU WANT.” We went there, knocked on the door and I see Rick from the far walking towards us with a lady. And it’s his mum! We had dinner with him, his wonderful wife, his mum and two more people from his team. He seated everyone at a big table and was just talking to me for three or four hours. I was asking everything! He inspired me so much—he is just himself, very independent, not running with the trends. The funny thing: his birthday is even on the same day as mine!

Another  similarity:  you  do  work  closely  with  your  partner  as  well…
It’s hard, but it’s cool. I also spoke to Rick about it and he said, No one tells me what the fuck I need to do or not. And I’m like, amazing, do you hear babe? No one tells me nothing. It can be hard, it can be easy. It’s fight, it’s love, it’s everything.

You mentioned your Surf video before—a video that is basically a three-minute-long sexual innuendo paired with suggestive lyrics. The song arose from a phase in which you tried out sexual abstinence. Do you often try out self-experiments like that?
Smaller ones, every day. I want to see how far I can take my mind and my body. I experiment with my physicality, I work out and dance every day and really push myself. I try different kinds of diets and see how they affect me. Right now, I’m really into this ketogenic shit. It’s not really rapper-ish. 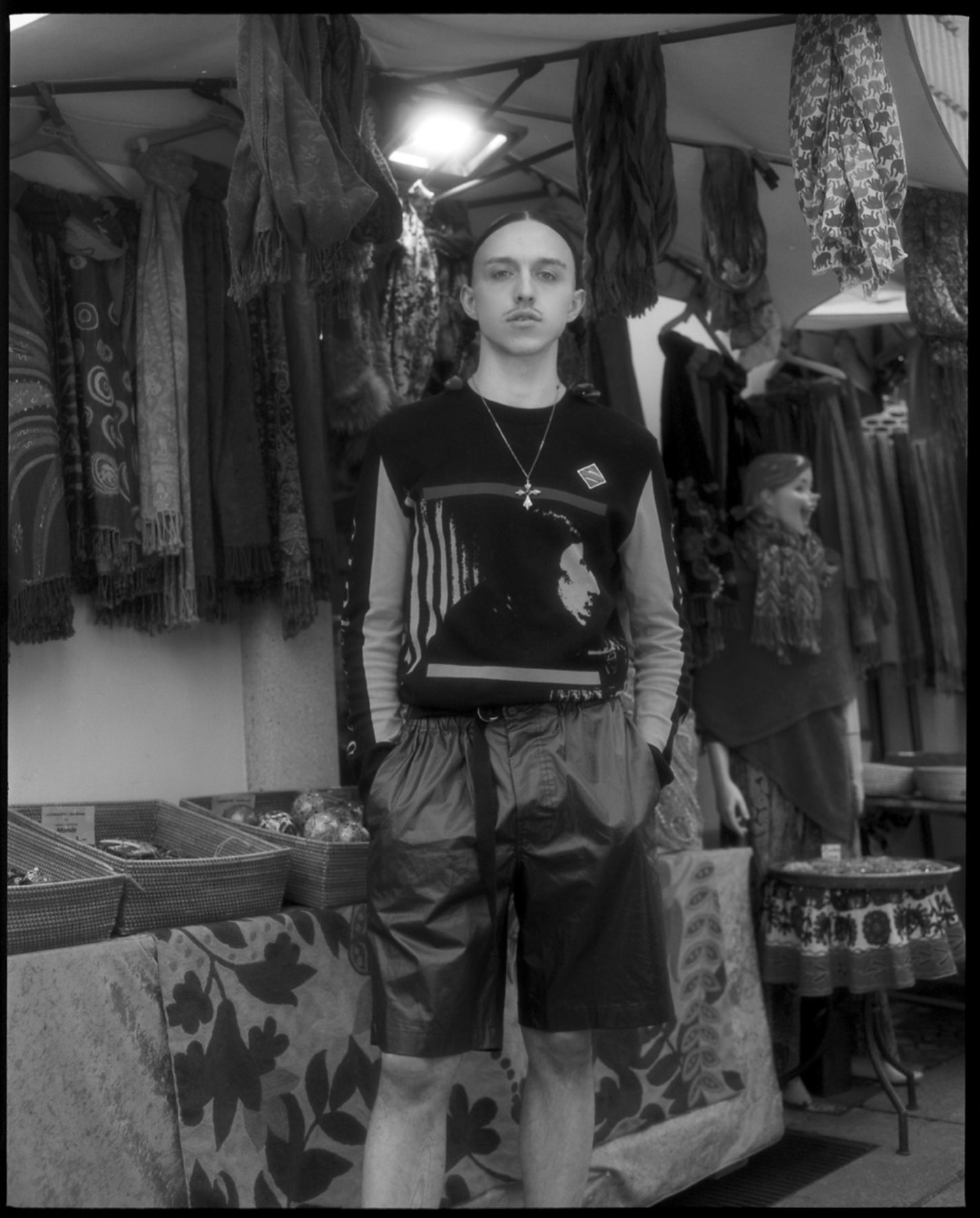 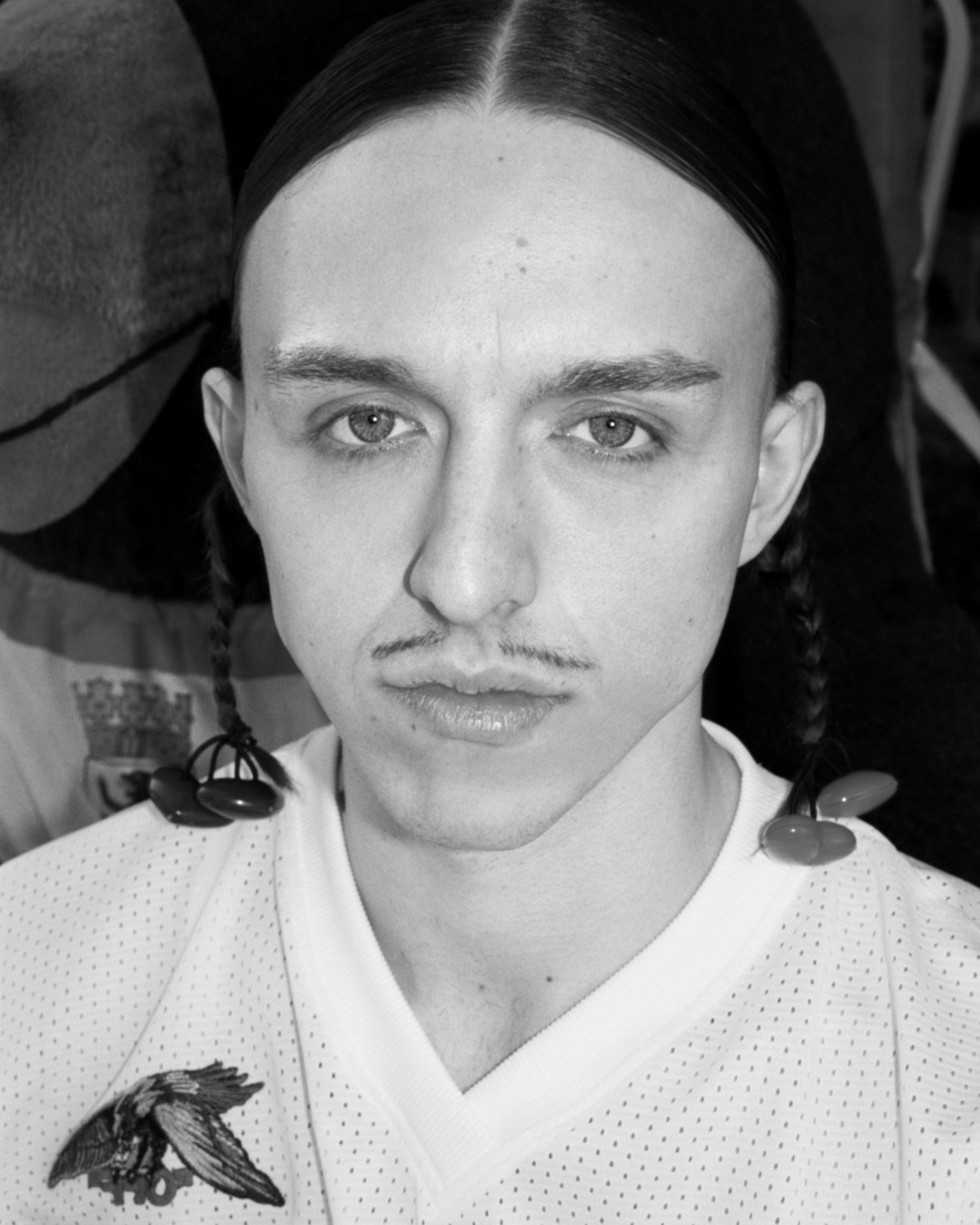 Top OFF WHITE via matchesfashion.com

Do you sometimes worry you might overdo it? How do you take care of your mental and physical health?
Sometimes you need to take a break. It’s hard if your work is your passion and your passion is your work. It’s the easiest way to burn so you need to know when to say no. I want to Steve Jobs this shit, I’m literally psycho about making it. But at the same time your body sometimes tells you that you need to chill. It’s all about this zen yin-yang kind of life—to keep it all in the balance.

Is spirituality a part of your life?
Yes but in my own way. I don’t believe in God, I believe in myself. We are all gods and we should speak to our higher selves and project things into the future. My higher self tells me to not care that much and to just listen to myself.

In your videos you often create surrealist visions of the future—would you like to live in the worlds you present? Or would you even like to become something like a cyborg yourself?
Sometimes I already feel like I live in my videos. Or better: in a video I haven’t shot yet. I live in an old Russian toy factory which was built in the Soviet era but got renovated into a really beautiful apartment. It’s very futuristic and looks like in Spike Jonze’s movie Her. Very cybergoth. But in the end we all are already totally doing this cyborg shit. We are all living in the internet. Having cyborg bodies or—imagine when your body starts to die you just transfer it into a new cyborg body—that could be very possible, maybe even in our lifetime.

Are you for or against that kind of development?
I’m not afraid, in theend they should help us. I hope we all learned from these sci-fi movies. Worst case scenario: just pour some water on them. They’re fucking robots.

Another pro or con question: with the seemingly endless ͚post-Soviet trend, do you feel like the West is exploiting yet one more culture?
There was a time when everyone was using Chinese and Japanese stuff and now they’re like, ͞let’s go for Russia, that’s so exotic. On one hand, they are showing love and acknowledgement, and on theother it’s a fake crowd doing this. Demna Gvasalia is literally doing what bums have been wearing for years in the place where I grew up. You can’t tell whether it’s Balenciaga or if the person’s just poor. 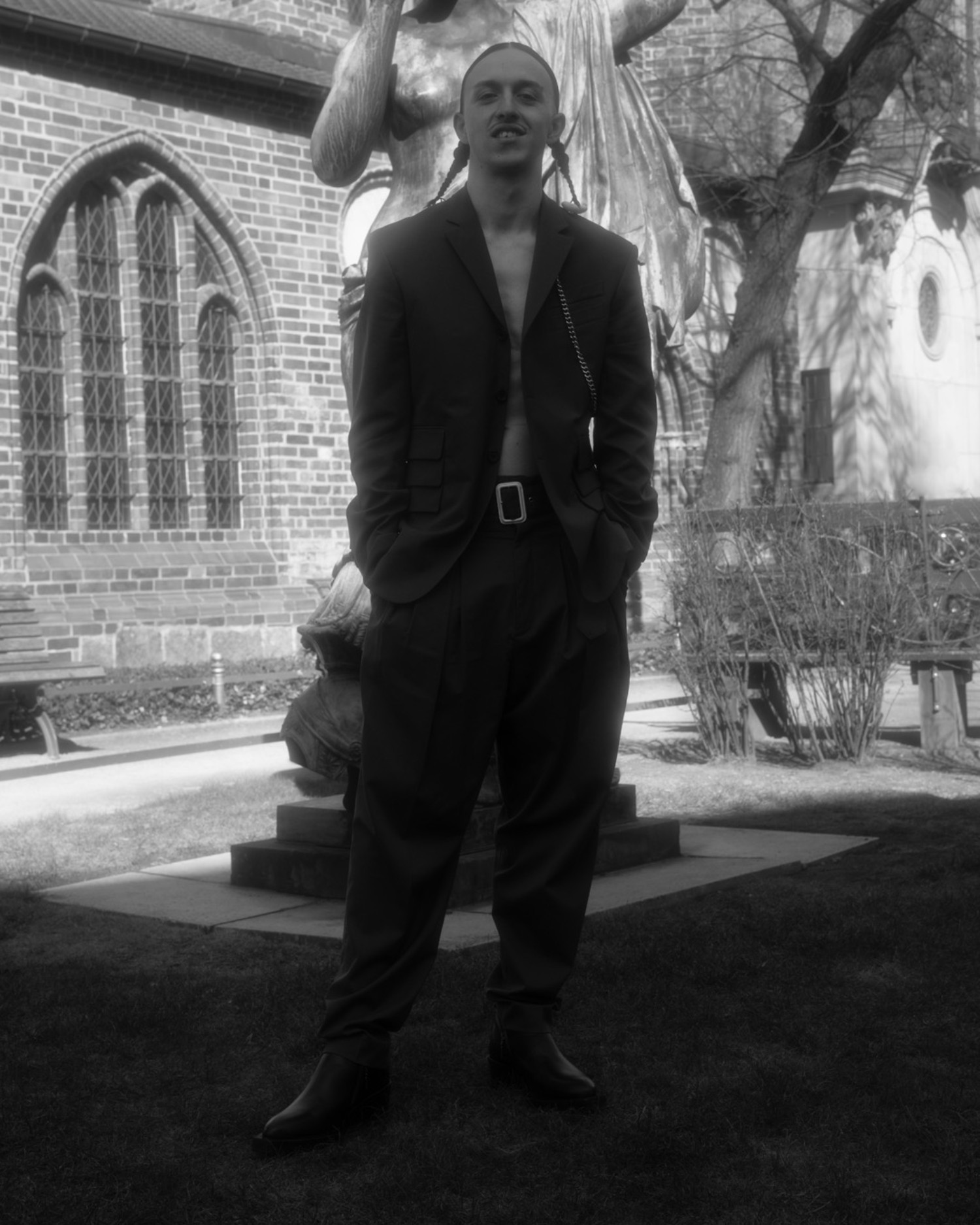 The way you stylise your artist name—TOMM¥ €A$H—might suggest that you don͛t like being poor. How much do you love money?
I don’t have to love money if money loves me.

And before money loved you, what was the weirdest job you did?
If you need money, you need it. I would never kill anyone but anything else, I would consider. I used to work as a lawn mower. You get addresses where you have to go with your team, you wear this full neon outfit. I think it was the manliest and coolest job I ever did. I totally went there just to get the experience.

Imagine you were the president of Estonia in 2040: what would be the first thing you would change?
I would make alcohol cheaper. And I would build a huge statue of myself coming out of the sea, holding a ship. I think there’s a problem with architecture—everybody’s building these pointless, boring shit glass buildings. Maybe I would build a castle. Why is no one doing that anymore? I would also rule that people have to work less and do more of their own thing and not get like €400 when you are 75 years old, like it’s the case for my grandma. I would support the people.

INDIE NO 59,   INTERVIEW,   THE WORK ISSUE
Loading next Article