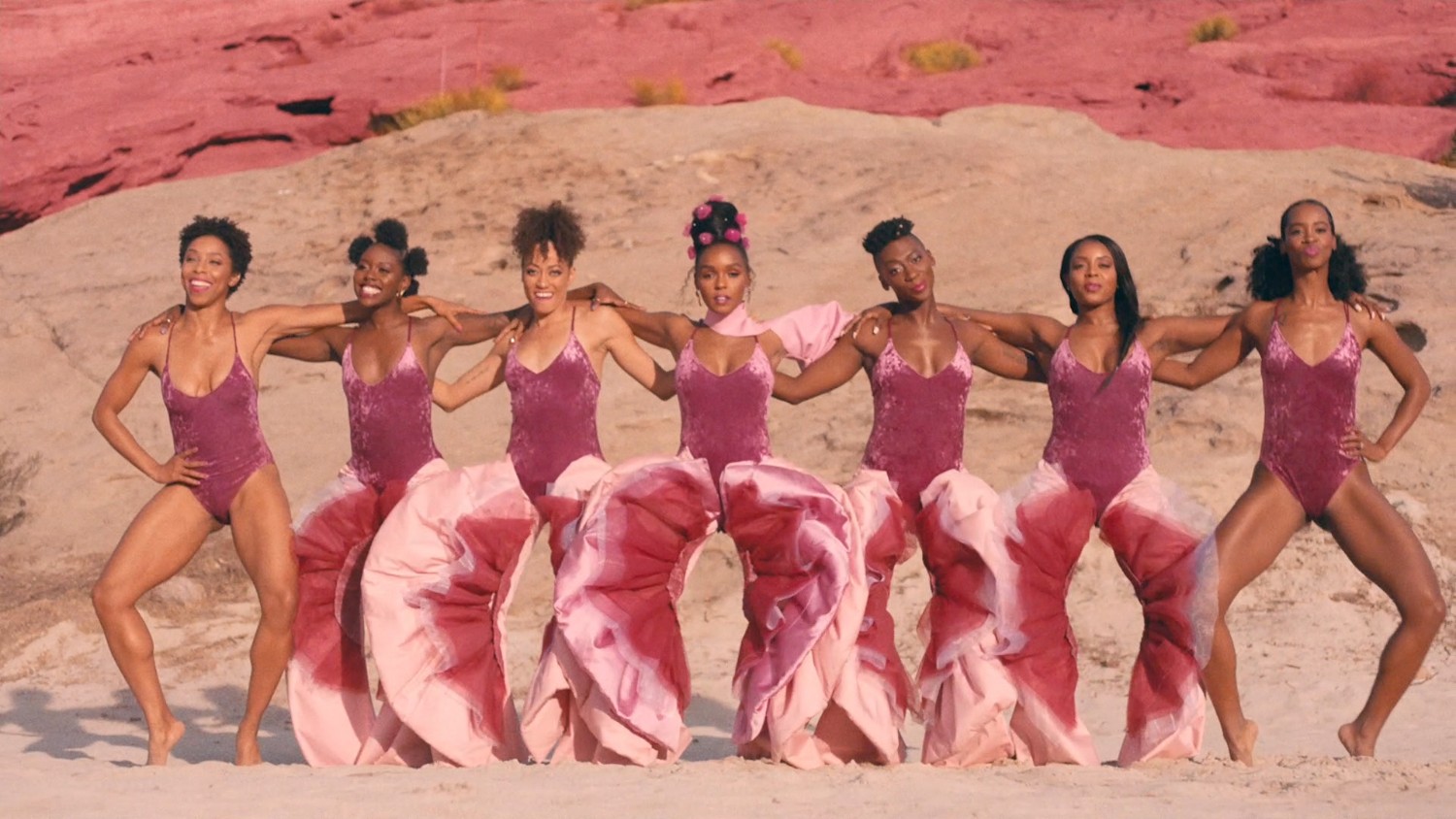 EXAMINING THE ROLE OF POLITICS IN MUSIC VIDEOS YESTERDAY, TODAY AND TOMORROW

There was something noticeably different about last year’s MTV Video Music Awards. Long serving as the awards show most prone to disruption—more a platform for the latest celebrity feud than a showcase of groundbreaking music videos (remember Kanye’s outburst? Miley’s sexual awakening? Lady Gaga’s meat dress?)—the VMAs have been dismissed by virtually every media outlet, relegated to a showcase of debauchery rather than one of innovation. In the New York Times’ 2013 VMAs recap, Jon Caramanica pegged it “an implicit rejoinder to the Grammys, a place where the kids can play safely without fear of Adele’s stealing their lunch money and Moonman statues”; words like “boring”, “unnecessary” and “wacky” have been used to describe shows since.

And yet, while last year’s awards certainly maintained this feeling of wackiness, there was also a sense of self-awareness, of (apparent) sincerity. Kendrick Lamar, who took home a handful of awards including “Video of the Year”, opened the show with a politically charged and quite literally fiery performance of “DNA” and “HUMBLE”; this set the tone for a series of performances that were inherently provocative and almost always political: Logic’s “1-800-273-8255” (named after the American suicide hotline), Alessia Cara’s body-positive “Scars to Your Beautiful”. And a sense of urgency and sharpness was present in almost all of the speeches, with topics like mental health, racism, self-acceptance and feminism all fair play. A new award, called “Best Fight Against the System”, was introduced; all previously gendered awards were changed to gender neutral. But were all these changes just an attempt to maintain some semblance of relevance, however superficial that may be? Or were they a reflection of a changing music video landscape, one which now prioritises political provocation and strong statements above all else?

While the answer to both of these questions is probably a hard ‘yes’, it still proves useful to study the history of music videos—and, by extension, MTV. The music TV-channel launched on August 1, 1981 with the words “Ladies and gentlemen, rock and roll,” spoken by John Lack and played over footage of the first Space Shuttle launch countdown of Columbia. From the beginning, it was very much premised on the future; it seemed self-aware of its impending influence in an almost creepy way, debuting The Bugles’ “Video Killed the Radio Star” as its very first music video. The story of a radio star whose career fell apart after the birth of television, the video stood as the perfect way to set the stage (or, rather, screen) for a cultural upheaval. They took the credit for your second symphony, The Bugles sing, Rewritten by machine and new technology… It also proved to be quite prophetic: by October 1981, record sales of the artists whose music was played on MTV but not radio stations were booming, and publicity was granted mainly to those who made provocative statements and provided the visuals to back them up.

A few years after MTV’s launch, high-budget, movie production-level videos became the standard for what a music video could and should be. When the network began listing directors’ names at the end of each music video in late 1992, it became increasingly clear that the form was, above all else, an auteur’s medium. Spike Jonze, Michael Gondry and Chris Cunningham were at the forefront of this movement, directing videos that interrogated the fine lines between film and performance, music and art: Aphex Twin’s freaky-cool “Come to Daddy” (1997), Beastie Boys’ American cop television-inspired “Sabotage” (1994). Music videos were no longer solely intended to drive record sales; they were also an opportunity for film directors to express their unique visions in ways that they never could before. And, as you might guess, these visions were often political: videos like Michael Jackson’s “Thriller” (1982) and Madonna’s “Like a Prayer” (1989)—which was officially condemned by the Vatican—fought for sexual liberation, Public Enemy’s “Fight the Power” (1989) and Rage Against the Machine’s “Sleep Now in the Fire” (1999) made statements on racism and colonialism.

But, despite its message of celebrating freedom and expression, MTV wasn’t the open-minded platform that it claimed to be. Though television meant advertising dollars and enormous budgets, it also meant sacrificing creative control—and, more often than not, intense censorship. Lyrical references to sex, drugs, violence, suicide or advertising were often edited out, and videos that were seen as particularly incendiary were either demoted to the late-night rotation or pulled from the channel entirely. This made it hard for artists to take lots of risks in their visual offeringd—and so, by the end of MTV’s reign, the music video landscape had become quite commercial. When the network forayed into the increasingly popular world of narrative-based reality tv after launching “The Real World” in 1992, it became clear that, in order to maintain relevance, music videos needed a new home.

Launched by PayPal co-workers Steve Chen, Chad Hurley and Jawed Karim in 2005, YouTube quickly proved to be the home that these videos so desperately needed: it was free from the commercial confines of television networks, and allowed artists to convey any sort of message that they want to the exact audience that they want to convey it to. Rather than relying on the gatekeepers of the TV world to choose to give their videos a platform, artists could instead just publish their work themselves; consistent with the independence afforded by the Internet as a whole, YouTube and similar platforms have democratised the music industry further, enabling a more diverse range of voices to put their work out there.

But this democratisation, of course, has its catch: though YouTube claims to offer heaps of freedom to both its consumers and creators, it has recently been under fire for introducing a new policy designed to reduce the audience for videos deemed to be “inappropriate or offensive to some audiences”—a move which WikiLeaks founder Julian Assange calls “economic censorship”.

This doesn’t discount the profound effects that the platform has had on the process of making a music video. According to Larkin Seiple, the cinematographer of Childish Gambino’s “This is America” video, making a music video today is a far more intimate experience, “unlike the MTV era,” he says, “where a video premier was a potential TV event.” “With that,” he adds, “comes more creative control for the artists and the film crews involved.”

A commentary on race relations in America filled with references ranging from minstrels to the mainstream co-optation of black culture, “This is America” has been one of the most hotly contested music videos of the year—quite a feat, considering the fact that 2018 also birthed new viral music visuals by the likes of Drake, Kali Uchis and Kendrick Lamar. It also stands as a sort of face to a movement that is emerging among the music video scene, one which seems to prioritise the political. In light of Drake’s “God’s Plan”, Janelle Monae’s “PYNK” and Joey Badass’s “Land of the Free”, to be a successful music video today is to be a political music video… or is it?

Seiple, and other directors and cinematographers that we talked to, aren’t entirely convinced that music videos need to be political to be successful; they just need to fall in line with the messages of the music they accompany—which, yes, are often political. A successful video, Seiple says, is “making something genuine to the music’s experience or a unique concept”. Emma Westenberg, the Dutch director behind “PYNK”, doesn’t think that political commentary is necessary to make a music video successful—”but a strong voice is important,” she says. With its pink-filled landscape and heavy sprinkling of innuendos to the female anatomy (including bespoke pussy pants, designed by Duran Lantink), “PYNK” certainly stands as a testament to this importance. It served as a means through which Monae came out as bisexual, after all.

For Zia Anger, a filmmaker who has worked with the likes of Mitski and Angel Olsen, political overtones in music videos are useful in generating meaningful dialogue and possible change so long as they’re not being commodified for views or money. “I think there are a lot of artists that are using very political moving images and I am excited by that,” she says. “Still, the line between what is radical and what is performative is slippery. The future of music videos that are made under the constraints of the capitalist music industry is bleak.”

Seiple sees videos returning to their roots, “leaning back towards performance pieces instead of narrative pieces”, adding that, as media evolves, “the whole concept of music videos could shift with more immersive technologies.” One such technology, which has been around for a few years, is virtual reality; artists from The Weeknd to Björk have been utilising VR to afford their viewers a—quite literally—more holistic view into the worlds that they are trying to create.

Though there has yet to be an outwardly political music video that utilises VR, studying our world’s current use of VR in a political context proves useful in predicting what’s to come. Beyond White House tours, various American politicians and organisations are now using the technology to travel to destinations like Syrian refugee camps and Los Angeles‘s Skid Row as a means to gain a glimpse into some of the most difficult living conditions on the planet. In a recent Time feature, Ban Ki-moon, the UN Secretary-General, argued that immersive video technologies have “the power to make people perceive and feel one another’s reality”, inspiring a strong sense of empathy and compassion in its viewers that video alone cannot achieve.

Combining this with the already immersive form of music seems like it could activate an entirely new experience in the viewer, one which carries with it great possibility for change—that, or a whole new feud for the VMAs to play host to.