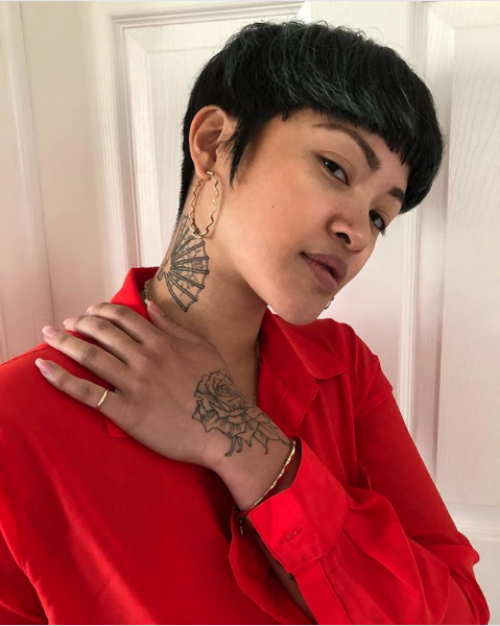 Though once reserved for prison cells and suburban basements, stick ‘n poke tattoos have become quite a trend as of late, offering up an alternative to the traditional visit to a tattoo shop. Instagram, of course, has played a large part in kickstarting the trend, enabling artists to showcase their work to the public without having to be a part of a tattoo shop or collective to do so. Here are five of our favourite up-and-coming artists—many of whom have plans to visit Berlin fairly soon.

Perhaps the most well-known artist of this list, Montreal-based Emerik Derome (a.k.a. dirtyl00ks) first started poking at the age of sixteen; an origin story consistent with many other artists, he tattooed friends purely out of boredom—”the classic shitty tattoo with India ink,” he says. Fast forward a few years and he has gained quite the international fanbase, one that includes his partner and collaborator Antonina Kallaur (who, before meeting Emerik, had no tattoos). With a gothic approach to playful iconography—from dalmatians to dice to grim reapers—his designs are sure to make you take a second look. Catch him when he’s in Berlin in mid-June—spots fill up fast!

Based in Kiev, Vitaly Kior takes an ink-heavy approach to his designs, approaching fairly brutal imagery (think Pitbulls, barbed wire and fangs) with an equally brutal hand. His pieces are the perfect gothic additions to any sleeves that you’re trying to fill, giving you a professionally done tattoo look with the more intimate stick-and-poke experience. Be sure to catch him the next time he’s in Berlin.

Keara is still fairly new to poking—she started just last summer after a former coworker was kind enough to show her the ropes—but she says that it has already changed her life, allowing her to make a gig out of something that is both aligned with her existing art practice and outside of the confines of the mainstream tattoo industry (which, according to her, can sometimes get a bit “gate-keepy”). Her designs are fun but also intricate, playing with motifs of portraiture and nature in a style so crisp that we could’ve sworn they were done with a gun. She is currently based in Chicago (with frequent stops in LA and NYC) but is planning on coming to Europe soon—lucky us!

A fixture of the NYC tattoo scene for a bit now, a lot of Carson Foley’s designs play with traditional architectural imagery, repurposing columns, statues and plaques into unexpected pieces done in both blue and black ink. His technique is fairly heavy in shading, making for tattoos that almost look like they’re done with a gun. We’re not quite sure if he’s going to make a stop across the pond anytime soon, but be sure to keep up with him on Instagram to find out.

Thanks Brian! done at my home @comewhatmay.la

Another artist whose stick ‘n poke technique is so crisp that it looks like it was done by a gun, Yeda Zweifel’s work plays off of the minimalist designs of artists like Matisse and others; however, her choice of imagery, from UFOs to weeping women, is decidedly different. If she doesn’t have any spots open when she’s in Berlin later this month, don’t worry—she makes stops in Deutschland quite frequently.