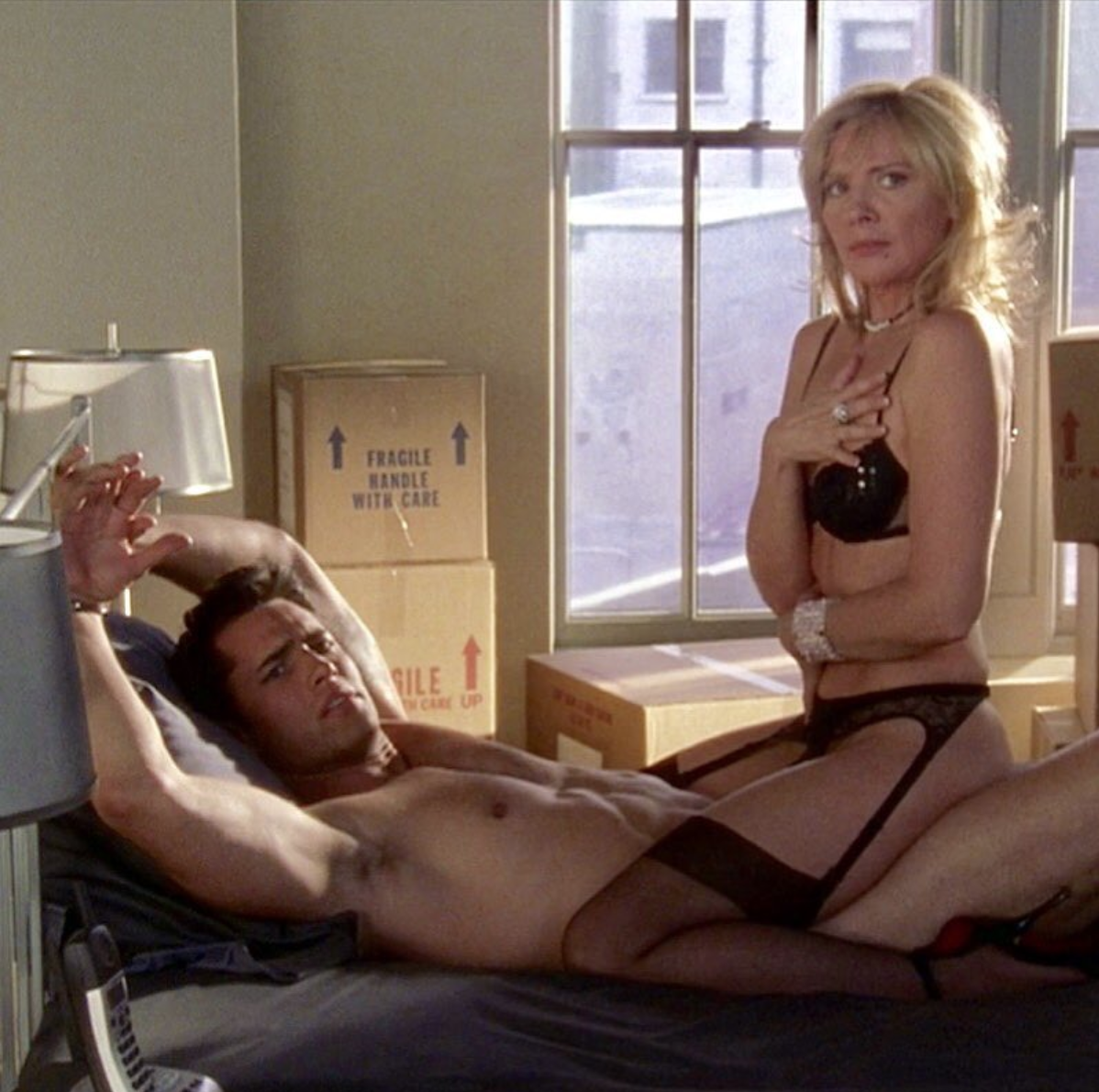 20 YEARS LATER: IS IT WRONG TO STILL LOVE SEX AND THE CITY?

When it first aired in 1998, Sex and the City was met with its fair share of criticism. With full frontal nudity, difficult characters that resisted identification, and explicit depictions of sexuality that broke the more PG mould of romantic comedy sitcoms of the time, it was seen as incredibly controversial. Irv Letofsky of The Hollywood Reporter quipped that Darren Star’s characters were “too disagreeable to find funny”; Charlotte Raven, a columnist for The Guardian, told her readers that she “couldn’t bear the idea of anyone believing… that this worthless pile of swill was in any sense culturally relevant”. And yet, despite—or perhaps because of—these mixed reactions, Sex and the City still proved to be an instant hit, trouncing the network competition every Sunday evening and becoming the highest-rated comedy series on American cable for two consecutive seasons. Twenty years later, amidst viral meme pages and even more viral feuds amongst former co-stars, this relevance still holds.

And yet, as Emily Nussbaum argues in “The Difficult Women of Sex and the City”, the sitcom was not only controversial for its time but also radical. The plot follows certain romantic comedy tropes—the (often comedic) pursuit of love; the familiar, Golden Girls-esque archetypes of the Prude (Charlotte), the Flirt (Samantha), the Career Woman (Miranda), and the Heroine (Carrie)—but also actively tests the limits of its pink-hued genre. Its characters are full of vast complexities, easily relatable in one scene and endlessly irritating in the next. They aren’t always seen as desirable by men, and regularly showcase their flaws: Charlotte, a conservative art dealer from Connecticut, is superficial; Samantha, a successful publicist, is incapable of being vulnerable; Miranda, a talented lawyer, has a sharp tongue; and Carrie, a manic sex columnist with a closet full of $4,000 shoes and a passion for ‘wondering’, is at the whims of whichever man she is seeing.

The characters also, crucially, develop throughout the series in ways that other sitcoms of its time like Friends or The Sopranos did not allow. They are not only difficult but also vulnerable; they often make the wrong decisions, and don’t always learn from their mistakes. Instead of solving a problem or providing some promise of a resolution, the endings of each of the episodes instead invite more questions, more conflict. “‘Sex and the City’ was liberated from closure, turning ‘once upon a time’ into a wry mantra, treating its characters’ struggles with a rare mixture of bluntness and compassion,” Nussbaum writes. “It was one of the first television comedies to let its characters change in serious ways, several years before other half-hour comedies, like ‘The Office’, went and stole all the credit”.

But what Nussbaum fails to mention in her exploration of Sex and the City‘s apparent radicalism are its crucial downfalls, its tone-deaf offensiveness. How can one justify watching (and praising) a show that has notoriously pegged bisexuality as a “lack of sexual orientation” (“Boy, Girl, Boy, Girl…”); blackness as an accessory (“No Ifs, Ands, or Butts”); queerness as a phase (“Defining Moments”); and being transgender as a joke (“Cock a Doodle Doo!”)? Doesn’t the fact that the show was almost entirely written by men effectively cancel out any claims to radicalism or second-wave feminism? This week, 20 years after the first episode aired, we couldn’t help but wonder: Is it inherently wrong to enjoy watching Sex and the City?

When addressing these questions, it proves useful to consider how most viewers classify their consumption of Sex and the City, and other shows like it. In an article aptly titled “True Confessions“, The Guardian writer Lucy Barrick laments all the ways in which she justified watching Sex and the City, from “classifying it as an anthropological study” to wanting to find out if Mr Big is “the one”. But perhaps her most relevant observation lies in the very beginning of her entry, in which she labels the show as a guilty pleasure of sorts, her “dirty little secret”:

I hate Sex And The City. Or that’s what I told myself during its last series as I sat transfixed throughout the entire thing. Desperately, I tried to convince myself that I most certainly did not savour the witty banter of gorgeous Manhattanites in stunning frocks, all the while looking over my shoulder to make sure no one found me indulging my dirty little secret. Because Sex And The City is vapid, shallow, post-feminist nonsense. Except, of course, it’s not. It’s clever, entertaining, post-feminist nonsense.

By framing her consumption of the show in such a light, Barrick simultaneously tries to show that she is aware of her behavior and, in a sense, above it. Thus, the phrases “dirty little secret” or “guilty pleasure” are a mix of self-consciousness and self-congratulation—and because they are used to try to assert some sort of superior cultural taste on the part of the consumer, they are also fundamentally involved in existing cultural hierarchies.

It is both apt and somewhat ironic that the term “guilty pleasure” first emerged in the media in 1996, around the same time as both the beginning of Sex and the City and the end of the American culture wars. Unlike the modernist-dominated era that preceded the late-20th century, this period marked a blurring of cultural distinctions, the assertion of postmodernism. Sitcoms like Friends and pop stars like Britney were fully ingrained into the cultural vocabulary of the West, points of reference for people of all class and cultural backgrounds. Culture was now increasingly accessible; the notion of a single public culture was dismantled.

So why the need to classify one’s practices of cultural consumption precisely at a time when cultural distinctions ceased to matter? In “Against Guilty Pleasure“, Jennifer Szalai argues that the emergence of the term makes sense: people were no longer as ashamed of their viewing habits as they were during the culture wars, so they felt more comfortable announcing their cultural fixations—albeit under the denigrating guise of the “guilty pleasure”. “Once distinctions were blurred”, she writes, “you could announce a love for pop culture that, in an earlier era, you would have been too ashamed to admit”. But are all guilty pleasures created equal? If not, does ranking different guilty pleasures as superior or inferior to the other play into the very cultural hierarchies that postmodernism seeks to escape?

In an episode entitled “Boy, Girl, Boy, Girl”, Carrie finds herself dating a guy almost a decade younger than her. His name is Sean, and with shaggy hair, a boyish vocabulary and exemplary kissing skills, he is seemingly the perfect candidate—until Carrie finds out that he’s bi. “Is that a problem?” he asks. Carrie smirks, and the scene switches to a hallmark of every episode, the roundtable brunch discussion. In a matter of two minutes, the friends dismiss bisexuality as an invented category—a “lack of sexual orientation”, to be precise—and argue that it might be the very reason why there are no available men in New York City:

By the end of the episode, Carrie ghosts Sean after determining that she is too much of an “old fart” for his (and, apparently, his generation’s) sexual ways. “That night, I couldn’t get Samantha’s words out of my head”, she later writes in her column, “Was Sean’s generation onto something? Was sexual flipping the wave of the future? And if it was, could I play that game or was I over the hill? If women can transform into men and men into women and we can choose to sleep with anyone, then maybe gender doesn’t even exist anymore”. Carrie Bradshaw, how profound.

In considering this episode, it becomes clear that there are many different political ramifications to Sex and the City‘s plot points: unlike some other “guilty pleasures” like Gilmore Girls or 2009 pop music, the show has the power to shape the political views of its audience in ways that can enact actual violence on marginalised groups. By, for example, labelling bisexuality as “fake” or normalising violence against trans sex workers (see: “Cock a Doodle Doo!”), the show essentially encourages such behaviour among its—often very young and impressionable—viewers. And the fact that its characters, despite their resistance to being relatable, often enact such overtly offensive acts while being portrayed as impossibly glamorous makes the situation all the more worse, for who doesn’t want to have the physique of Carrie Bradshaw or the social calendar of Samantha Jones?

This leaves us in a tricky state, one that has ramifications that extend far beyond the realm of Sex and the City (and its subsequent movie franchise, which is worthy of its own article). Nzalai argues in favour of absolving the guilt when consuming a so-called “guilty pleasure”—”Don’t try to suggest you know better”, her article concludes, “Forget the pretense and get over yourself. You have nothing to lose but your guilt”—but it seems wrong (and, quite frankly, impossible) to watch the entirety of Sex and the City without being ashamed or disgusted at the views that it pushes. While we’re not going to suggest to stop watching the series entirely, perhaps a bit of mindfulness while watching would do good. After all, it’s what Woke Charlotte would have wanted.