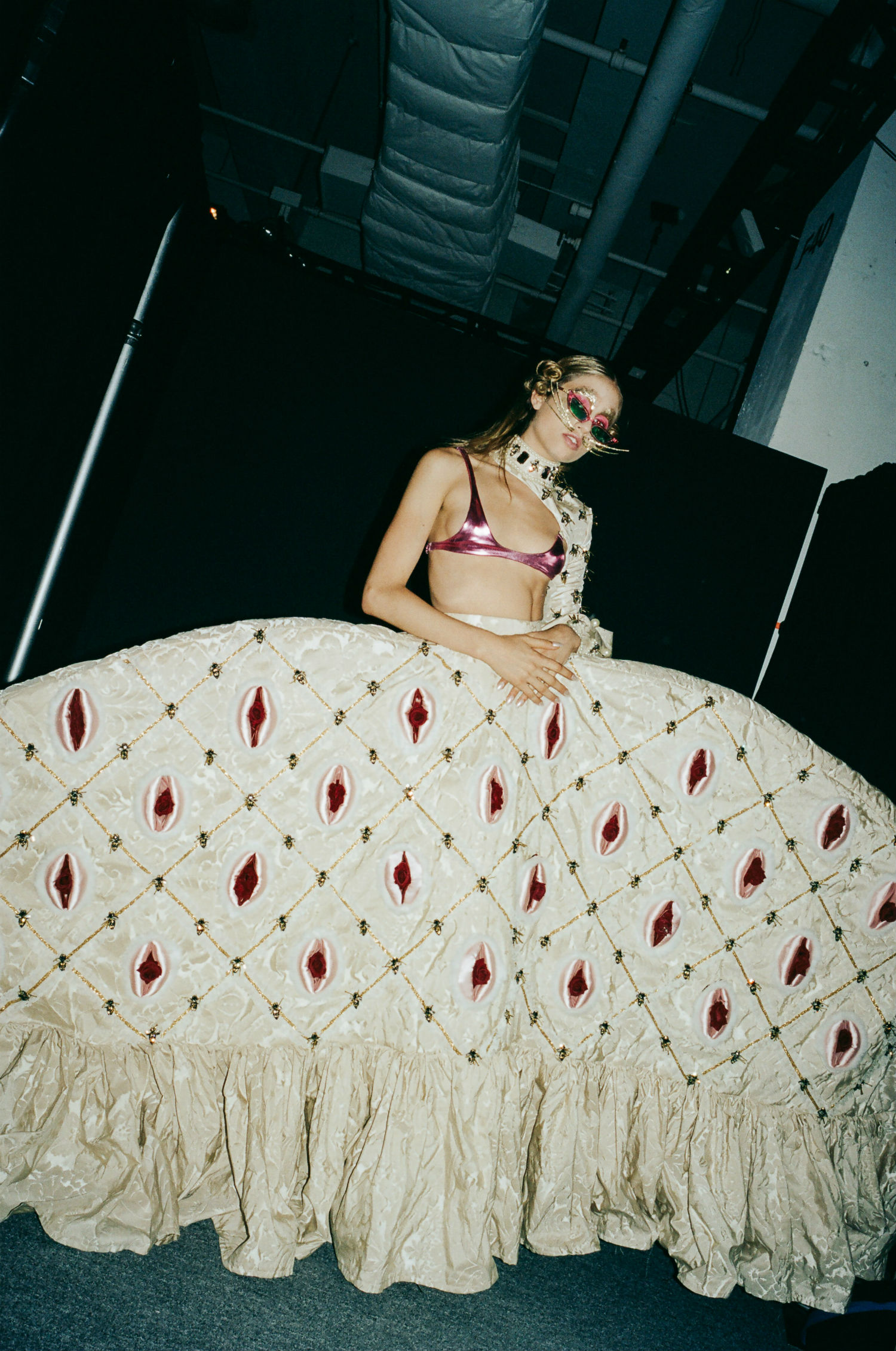 BEYOND TOMORROW: THE FASHION TALENTS READY TO CLASH POSTMODERNISM WITH SOCIETAL NORMS

Postmodernism is a tricky concept to pin down. Emerging in the dying years of modernism, which relied on a distinction between “old” and “new”, a fresh wave of postmodern artists and critics aimed to blur lines, to deconstruct and to call into question the very idea of objective reality.

In Postmodernism and Popular Culture, author Angela McRobbie describes the playful nature of a movement which thrived on the embrace of nonsense and didn’t take itself too seriously, before describing its interpretation in fashion as the reconfiguration of the past into something new: “[It is]the plundering of the past in the hope of discovering [clothes] which can be reinserted into the world of the image and given meaning as simultaneously old and new.” Postmodernism also became a project determined to skew the ideas of class and taste, dissolving the assumed distinction between “high” and “low” art and flashing the middle finger to privileged institutions whose existences were built on these hierarchies. In practice this meant layering references, repurposing materials and generally taking a radical new approach to creation. The aesthetics of postmodernism in fashion were varied but some examples centred on literal deconstruction, the splicing of hacked-away garments and the transformation of random objects into “fabrics”.

Maison Margiela’s longstanding “Artisanal” line is just one manifestation of this mind-set; the Belgian pioneer repurposed found objects and transformed them into exquisite clothing worthy of the fabled term “couture”, essentially elevating trash to treasure. Elsewhere, Yohji Yamamoto created dresses from deconstructed tennis balls and Rei Kawakubo used elastic, rayon and canvas to build garments which more closely resembled architecture than they did clothing. Her tottering, topsy-turvy models offered a genuinely anomalous vision and a radical blue-print for the rethinking of everything from sex and gender to clothing and construction.

Other designers have taken a different, tech-driven approach; Thierry Mugler and Hussein Chalayan both fused fashion and technology, creating the sexy couture robot and the seminal airplane dress respectively. Alexander McQueen also boasts an impressive, well-documented legacy of disruption. He had a noted fascination with nature and twisted romanticism, famously creating a dress made from real flowers which wilted on the runway (a focal point of his “Sarabande” collection) and another made from razor shells pillaged from a Norfolk beach, modelled by Erin O’Connor for his spectacular “VOSS” collection.

THE NEW WAVE OF SARTORIAL SUBVERSION

Years later, today’s recent fashion graduates are using the ideas of these designers and theorists as a creative springboard to engi-neer their own sartorial subversions. “For me postmodernism means that there is no absolute truth, no rules to follow,” states Nan Li, who co-founded Namilia with fellow Royal College of Art graduate Emilia Pfohl back in 2015. “In fashion, it means diminishing the boundaries between high art and pop culture, questioning existing cultural and social preconceptions and re-contextualising references in your work.”

“The Indiscreet Jewels”, the brand’s latest collection, brought this ethos to life, the frills and ruffles of 18th century romanticism clashing with flesh-exposing cutaways and bejewelled thongs. Sex-positive, subversive and endearingly tongue-in-cheek, the collection exemplifies the Namilia ethos: “For us, clothing is an aesthetic tool and a visual platform to express our beliefs, conflicts and dreams,” continues Li. “With our work, we aim to rebel, to provoke, to destroy false perceptions in society and culture and to define, for us, what it means for [the Namilia woman] to be truly free and feminine in all her forms.”

Swiss designer Paul Pourcelot takes this idea and pushes it further, even crafting an elaborate fictional history to backdrop his experimental, bricolage designs. “I created an unrecognised nation, named ‘The People’s Monarchy of Pourcelokhistan’, with a flag, an anthem, a story and many traditions,” he explains over e-mail. The story of this imagined territory underpins his graduate collection which lifts references from disparate cultures and fuses them together in a sartorial commentary on globalisation.

Pourcelot acknowledges his self-proclaimed appropriation as being lifted from a “dangerous source of inspiration that needs to be claimed but thoughtful.” In the context of his own work, he sees his juxtaposition of cultural references as an academic project which aims to “find the essence of what is personal culture in this very globalised world. Globalisation is a fantastic evolution for humanity and also a very dangerous issue for new generations. It offers a reflection on how we should consider ‘the group’ and how it’s possible to live together but still maintain a personal identity.” He also highlights the prevalence of the internet and how various cultures have their key signifiers digitised and compacted into thumbnails available for easy worldwide consumption: “Globalisation means also that we have access to many references and we’re rich in knowledge because of the internet; it’s a huge ethnographic museum. My aesthetic aims to position itself between these problems.”

Less rooted in the issues at hand is the work of Timothy Bouyez-Forge, an innovative Royal College of Art graduate whose label Bouyez was founded in 2016. He first developed a serious fascination with fashion at the age of 20 after previously studying film; consequently, he cites his key inspirations as an amalgamation of designers — Rei Kawakubo, Hussein Chalayan and Nicolas Ghesquière —and directors such as David Lynch and Ridley Scott. These references are written across his genuinely ground-breaking creations which he describes as being borne of a creative process he calls “rogue chemistry”.

“My work shows a relatable human narrative; overarching themes are migration, travel and exile,” says the designer of his disarmingly distinctive aesthetic. “I express these narratives in micro-themes and simplistic moments, like travelling to work or relationships between flatmates, but these are usually set in a futuristic mise-en-scène. The garments reveal themselves as complex redefinitions of banal products: a toy car becomes a belt buckle; a Kawasaki tank cover becomes a jacket.”

Bouyez-Forge describes himself as a perennial magpie, lifting inspiration from random moments, objects and strangers. The designer cites one recent example as a “curious vagabond” who keeps leaving him handwritten musings on utopia, peace and “liberal thinking” at the local pub. This is just one of the peculiar stories that underpin the radical vision of Bouyez, which encompasses biking gear hybrids, dystopian metal vests and, in one case, a tongue-in-cheek print comprised of the famous “white guy blinking” meme fragmented and repeated.

As for the message behind the spliced-up metal of discarded motorbikes, Bouyez-Forge points to “altermodernism”, a term coined by Nicolas Bourriard at the 2009 Tate Triennial to describe a new movement rooted in the blurring of documentary and fiction (“docufiction”) and cultural translation. The key difference is that time is viewed as a multiplicity, meaning that various disparate references from various points in history are navigated within the work of altermodern artists: “For me, it’s the ‘junkspace’ of architectures and product that construct a new face of modernity,” summarises the designer.

The theoretical language which under-pins movements like postmodernism and alter-modernism may be tricky to decipher but young designers are actively engaging with these academic terms and realising their visual counter-parts with their own work. Some might dismiss them as capricious, others as nonsense, but the fact is that these ideas underpin some of the most progressive work in the fashion industry — both past and present.

The difference between today’s forward-thinking designers and those that came before them is undeniably the advantage of growingup in a digital world which offers unparalleled access to a seemingly endless wealth of resources. Tumblr, Pinterest and countless other sites distil images of the past into .jpeg form, presenting them as malleable reference points to be modified, juxtaposed and reconfigured as we see fit. As Pourcelot shows, this can be precarious; the blurring of binaries and disruption of “objective reality” may be some of the more progressive results of postmodernism, but appropriationand the erasure of cultural meaning are more problematic side effects. With that being said, more designers than ever are at least creating work which breaks with the standard conven-tions of “fashion”. Whether or not you’re a fan of Pourcelot’s fictional nomads, Namilia’s sex-positive romantics or Bouyez’s futuristic garment-vehicle hybrids, it’s hard to deny that fashion’s embrace of playful postmodernism and produc-tive nonsense has yielded some wildly thought-provoking results.

TECH AND TECHNO ARE THE HEART OF COPENHAGEN’S HELIOT EMIL 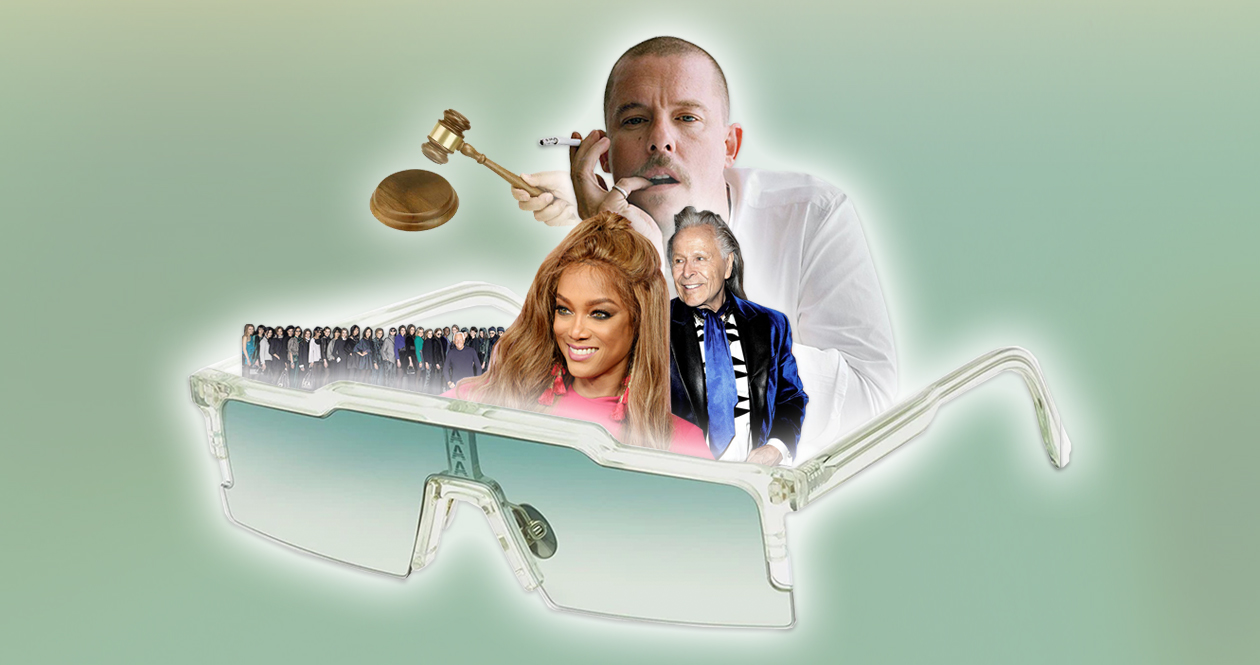 FEATURE,   INDIE NO 58,   THE NONESENSE ISSUE
Loading next Article