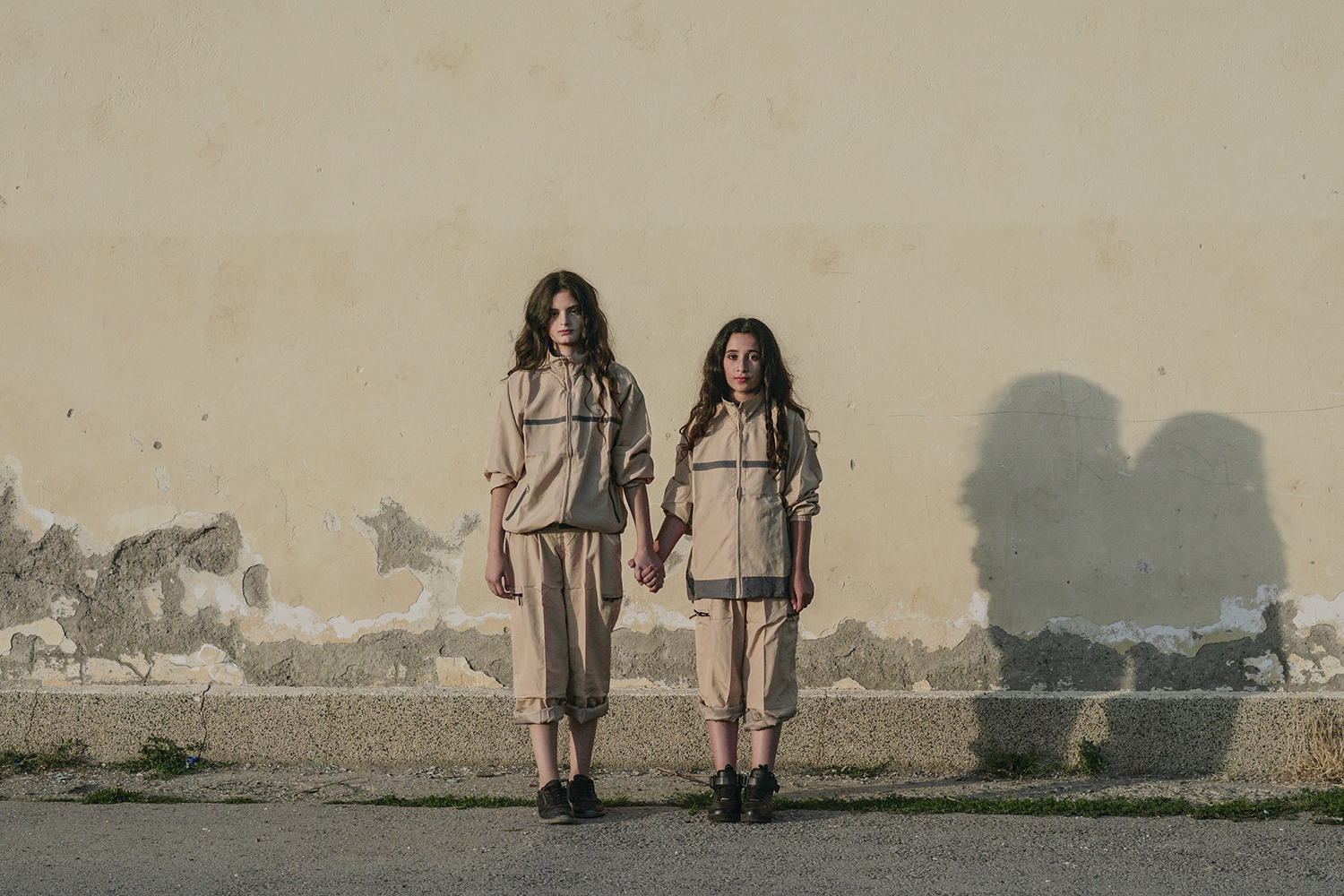 ANDRRA’S ‘PALINË’ IS THE PROJECT EMPOWERING ALBANIAN WOMEN THROUGH SONG

With folk songs as their only means of passing down stories of their lives, generations of women around the world have sung with raw honesty about their experiences of arranged and child marriages. After travelling around Kosovo in search of such rhapsodies, ANDRRA presents the lyrics of these folk songs in her heartfelt project Palinë.

Bridging together the polarised cultures of her rural hometown in Kosovo and her now-home in Berlin, the sounds of these tracks ring true to her own lived experience and heritage. Growing up in Germany and raised by parents from a village in Kosovo, ANDRRA speaks of feeling as though she always lived in a “parallel Albanian world” – not really part of the German culture around her, nor finding herself in the Albanian cosmos of her parents. Now, through Palinë, she draws upon the tales of women like her mother, intertwining them with sounds she’s developed since moving to Berlin in 2010. Drawing upon unlikely similarities between the repetitive, trance-like sounds of traditional Albanian folk-songs, and the tough, industrial feeling of Berlin, Palinë is a unique and culturally significant project.

Sat in an Albanian café in Berlin, we caught up with ANDRRA to talk about rural village culture, filming with cousins, and empowerment without blame. 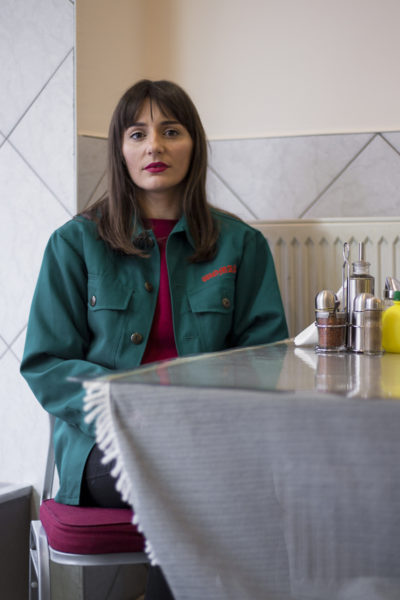 The songs throughout Palinë have very powerful, Albanian lyrics, which your song book translates into English – what led you to decide to present the songs this way?
ANDRRA: It was a decision to keep the lyrics in Albanian, because the idea was to make the women who have had all of these experiences part of pop culture. I would have excluded them immediately if I had sung in English – it would have just been talking about them, but not really have them be a part of it. For me it felt more involving if I sang them in Albanian, and then tried to include the rest of the world in the visuals and the song book. I felt it was a necessity to have something where the lyrics are translated, to explain where we are coming from and how the idea developed. Because the lyrics are not understood by non-Albanian speakers, it’s hard to understand the whole idea of it. You get a sense, and you get an aesthetic idea of it, or an emotional idea, but you don’t really understand what it’s about without the lyrics.

Have many women reached out to you?
Yes! My mother is the first one – the whole project is kind of a story of my mother, who was engaged when she was 14, married off when she was 16. She never got to go to school to learn to read and write – those songs were the only way that those women passed their stories. It’s a huge generational gap, especially for this generation who were born here, but their mothers and parents came from rural Kosovo.

What is it about the culture of rural Kosovo that inspired you in this EP?
These stories are exclusively folk songs from the rural area, and if you know Albanian you realise immediately in the language. The lyrics are very village-like, and that’s what I like about them. We have traditional songs that are really beautiful with orchestras, and are presented in a very impressive way, and are arranged with the most educated musicians of the country – it’s a wonderful thing. But, I love the rural folk songs because they are just the complete opposite: there’s nothing beautiful about them. They are not fully arranged, it’s only a tambourine that’s always repeating itself. It almost puts you in a trance. And the way the women sing (or the men for that matter) in the rural areas is not melodic and beautiful, it’s really out-loud. The language and the lyrics are so direct and honest, there’s no poetry in it. I love that directness.

It was important to me to use that language and to work with those songs, because the culture of village areas and rural areas was very left-aside, and was not part of pop-culture. Women were even less a part of pop culture – their stories and the way they live and the way they see things. Friends of mine told me their mothers or their grandmothers love the songs because they’re the only contemporary songs that they hear that feel like they really understand. They understand not only the stories, but also the way the language is. Only later, now in my age, I’ve realised how important it is to feel heard or to feel felt. To understand that you are part of this life, or part of this era, of this time, and you’re not completely left out of it. I felt like since I recorded the songs and I showed my mother, she now feels heard, like, ‘now I don’t have those stories in my mind all the time, because somebody has put them out there’. It’s a strange feeling.

And all your music videos include women from your family, like the video for ‘Kalle Llamen’ which is shot in your home-village. Run us through how that came about…
I was there the summer before, and I knew I wanted to shoot the video there. I just felt like the villages are always presented in news when it’s about trouble, or when it’s about ‘oh, look at these poor people’. Pop-culturally speaking, villages didn’t appear visually much. I love my village, and I wanted to present it as beautifully as I see it.

I looked around and I had all my cousins, who all looked to be the age of around 14, so it represents Palinë (the main character) well. I wanted this rebellious approach, and I knew they were all like that. They were all living around the same area or near by in a different village, and everyone came and slept over, and my mother cooked for us all. I wanted to use the school too because it’s the school that my cousins go to, and my mother’s sisters went to (because her sisters were allowed to go to school from first to fourth grade) and so it’s that school where my whole family went.

And again, in the video for ‘Palinë‘, you use one of your cousins as the main character. What was the concept behind this video?
The idea was that we just followed one of the girls who were so rebellious at the school, and we wanted to follow her home, and to dig deeper into how her life actually is. My cousin that we filmed for Palinë, it’s her house, and it’s her brother, and it’s her village, and it’s her school, so we really did just follow her on her every-day routine. Of course her mother would say ‘Oh, she never does the clothes, now for a camera she does it’ – but it’s this kind of life. Her family is really sweet, but still, I’m aware of the pressure that lies beneath all of that sweetness and all of that hospitality that we get when we go there, I know that. As a girl, it’s still a different role you have to fulfil. There’s a lot of pressure in there too, so we wanted to show that.

After the ‘Palinë’ video I got so many emails from women who wrote to me and said ‘oh my god, when I saw that video I felt like me when I was 16’ – even those from the cities, or those who are now very famous politicians in Albania and Kosovo, very educated women, who felt that pressure that you have to serve. For me it was very interesting because I thought that this was only happening in the villages, and then I realised that even those very educated girls from the cities had that kind of pressure. Even though our lifestyles are totally different, deep down inside there is still that piece for the women that doesn’t get away from that kind of pressure.

The whole project is very powerful, yet it has a sensitivity in the way it approaches these topics…
For me what was important was to tell those stories – not with a pointing finger like ‘oh, what are these horrible traditions’ – but to just tell it. In that way, by including it in the discussion it changes much more than by pointing fingers. I also didn’t want to judge. My mother has a fantastic marriage with my father, they love each other. It’s a happy accident, so I wouldn’t say arranged marriage is good – definitely not – but I also don’t want to say that because it happens the rest of their lives were horrible, because they weren’t. I just want to talk about it, that it happened. I feel like if you talk about it, it’s very empowering. In most cases I realised that you can empower without blame. You can change everything actually, without blaming a single person. It doesn’t mean that you like everything, it just means that you don’t concentrate on it – you don’t remain in the same place. The whole approach for the project was more like, ‘ok, it is what it is – but let’s talk about it’.

ANDRRA will be performing at Berghain Kantine in Berlin on April 8th – buy tickets here, and find the Facebook event here. AND make sure to check our socials for a very special giveaway…