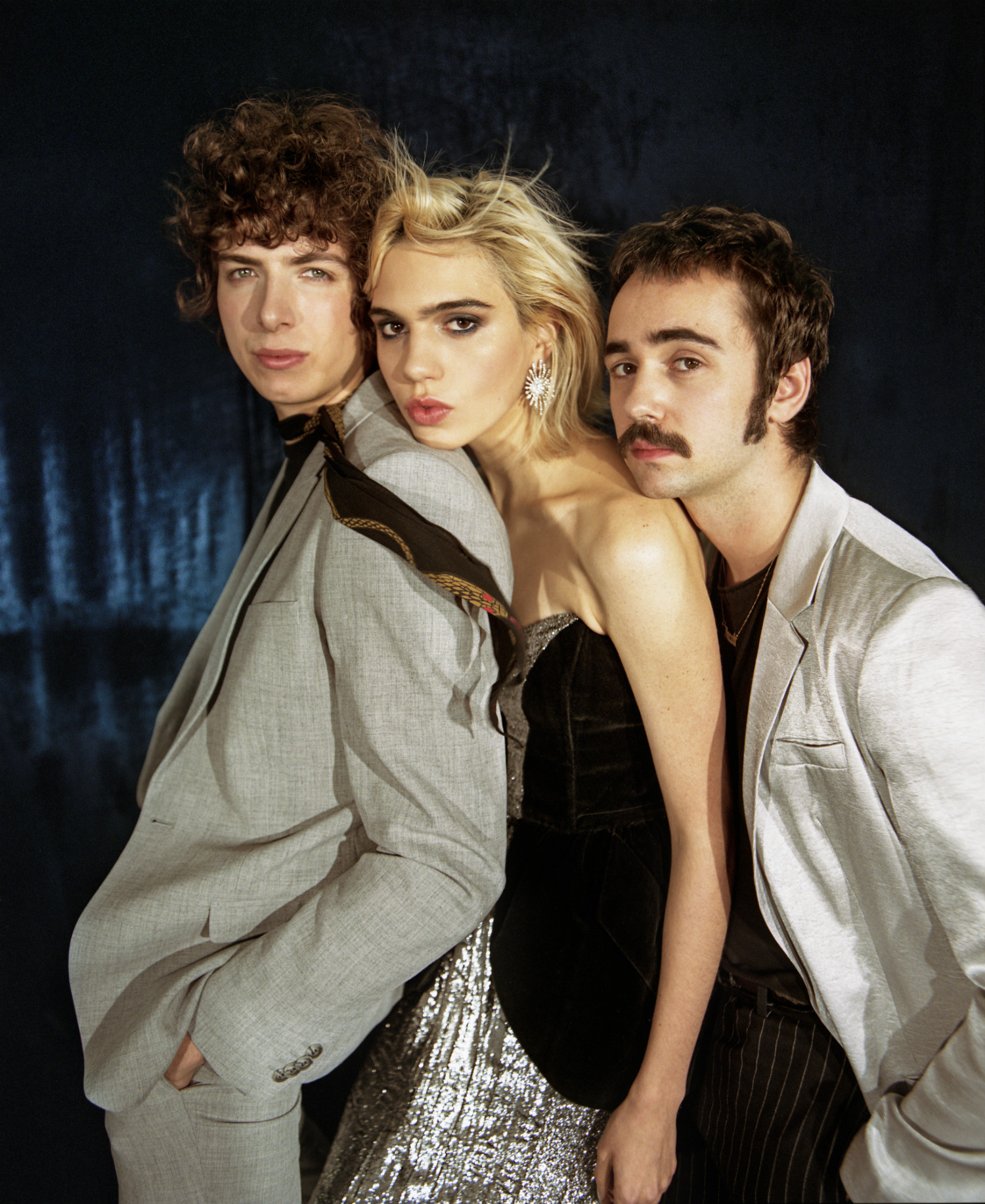 Indie Pop, fashion and activism – for singer Julia Cumming, these notions don’t contradict each other. Rather, they make up a perfect symbioses, as Julia and her bandmates Jacob Faber and Nick Kivlen prove on their new LP “Twentytwo In Blue”. After the New York trio’s debut album “Human Ceremony” already in 2016 put them on the music map as newcomers to keep an eye on, their newest release nothing but underlines this reputation. While songs like “Crisis Fest”, “Twentytwo” or “Sinking Sands” ponder the disrupted spirit of Gen Y, Julia also is head of the organisation “Anger Can Be Power” dedicated to political education and inspires designers like Hedi Slimane with her elegant counter-style. We spoke to the trio about a generation on the brink, the power of music – and always staying hopeful.

Your new record reflects what is going on in the world today. Is this some sort of counter reaction?
Julia: Things have changed personally and things have obviously changed in the world. Especially when it comes to the climate in our country. This reflects also on how you write. We’ve always been reflecting on things like time and age. We’re all 22 now; this album marks the end of us being teenagers and looking around. It’s a central aspect on this record that we started to look deeper into ourselves. This record is much more mature. Even though it’s not for a 22 year old to say that they’re mature. But you definitely have a lot more insights than you do when you’re 18 or 19.

The title “Twentytwo In Blue” sums up being a young adult in a very difficult time. You love to play with symbols…
Julia: The colour blue kept coming to us when we were writing. We eventually came to the conclusion that blue is a very deep and complicated colour. It has the capability to be hopeful. I remember Jacob’s first association of blue was the sky with all its endless possibilities.

Jacob: For me a big open beautiful sky represents a new beginning. I think the colour blue totally made sense for this record. It is a very blue record.

Everyone in the band is 22 now. You’re a part of generation Y – an engaged generation of protesters who bring back social and political activism!
Jacob: Especially here in America there’s a pretty big cultural conflict between generations right now. A lot of people from the baby boomers and generation X can’t really understand our generation. There’s a lot of saying that the Millennials are killing this or doing that, Millennials are whiny, Millennials are so sensitive. That sort of things. The record deals a lot with that.

Julia: There’s a lot of trends in the Trump era. We are part of that. We are talking about it and we are fighting against it. This is what we should be doing. It is some kind of call to action as citizens to not be complacent. The thing to pay attention to is not only that so many people are engaging. But the United States is huge. There are millions of people that are really happy about what is happening in the country. They are really happy about Trump. We are not really in contact with them because they’re living in a different world. We need to be talking to each other. But even though the record does touch upon political topics there are a lot of things that aren’t. We don’t want people to think that the record is an ultra crazy protest album. It is a record of who we are.

Was there some kind of masterplan behind the record and what you wanted to bring across?
Nick: We had finished touring in fall of 2016. We’ve been playing all across America four or five times. We went outside the New York bubble to see the country and meeting different people. When we got home to write a new record everything that has happened in the past year was weighting really heavy on our minds.

The record finishes off with the bittersweet “Oh No, Bye Bye” – a very twisted happy ending track…
Nick: I feel like that song is pretty triumphant in a way. A little bit anthemic. A nice way to end the record. The songs deal with a lot of uncertainty and turmoil, both personal and a socially conscious turmoil. We aren’t sure how things are gonna happen but hopefully if we stick together we’ll be alright.

A social consciousness you also promote with your activist group “Anger Can Be Power”, Julia!
Julia: “Anger Can Be Power” is meant to enhance what I feel like I can do as a citizen. When you’re an artist in 2018 you have to be in charge so much of what you do. We’re putting on events and are trying to help people who may not have any sort of political interest to begin to look at it. I’ve been thinking about founding my own organisation basically since the last election.

Your work includes being a musician, an activist and a model for various fashion brands. What would you consider your profession?
Julia: I think my life is the art. When you’re an artist you’re allowed to say that. The way that we all in the band live is very different from the norm. I spend about 90 percent of my life doing music. My parents performed as a pop duo. They were very passionate but not necessarily very successful musicians. But we all agree that music is the colour and the flavour of life. It gives it meaning. I don’t think you have to stay in your lane all the time but you have to be focused.

In 2017 you’ve been featured alongside SoKo in a huge Madonna cover story in the German edition of Vogue. Your style of dressing is reminiscent of the very young Vivienne Westwood or Debbie Harry. Did these great women serve as idols in your formative years?
Julia: Definitely! Well, I mean: Madonna is Madonna. It was totally insane when I got asked to do that. Being able to meet her and being in the presence of such a boss was pretty extraordinary. Also Vivienne Westwood and Blondie are incredible. I also love Betsey Johnson. I keep buying her vintage pieces over and over and over and over and over again where ever I go.

You’ve been modelling for various fashion brands like Saint Laurent, Anna Sui or H&M. The fashion business can be very superficial, shallow and simply unhealthy at times. How do you deal with the discrepancy of having a clear artistic message on one hand while being in commercial ads?
Julia: I think that modelling can be very cut-throat and very superficial. I am in a very lucky position because I don’t need to do it for a living. But a lot of girls do. Sometimes I can be a bit optimistic. I love really good editorials. I’m passionate about it. I love when it’s utmost creative. It’s not always like that and I have to be aware of that. Modelling is the commerce of the art of clothing. I really love style as a form of art and I continue to use it in my life. We all have our own certain style that we use to communicate who we are. I feel like I will always have an involvement in fashion.

Fashion icon Hedi Slimane considers you as kind of his muse. Do you also have a muse who inspires you?
Julia: Working with Hedi was pretty surreal. Being flown into Paris and all the people speaking French was really different and exciting. I was very grateful for everything that I learned. Hedi believing in me was really a once-in-a-lifetime-opportunity. It is definitely flattering being considered as his muse. He works a lot in action. Working with him you don’t have to speak a lot. I am really excited for him and his new position at Céline. I think that it’s gonna be a beautiful new era. For me, I don’t have a real muse. Mostly Nick has muses!

Nick: I think honestly the biggest muse for this record was our audience! When we released our first record we didn’t have a fan base. After going on tour and meeting a lot of fans we really wrote this record for them in a way.

„Twentytwo In Blue“ was released on March 23 via Lucky Number Music.