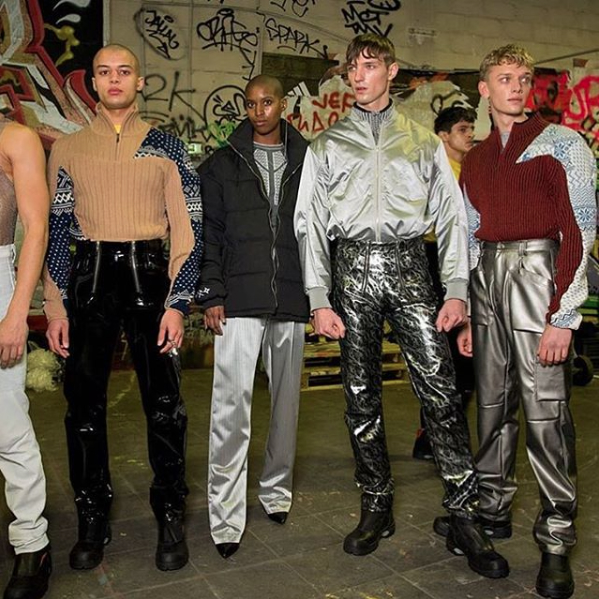 THE RESURGENCE OF THE NORWEGIAN KNITTED SWEATER

The global fashion turbine consists today of a select group of cities, personalities and identities, whilst the countries outside this revolving wheel of fashion usually get left out, until they have proven their place in this greater metropolis of dress. As Scandinavia has in many ways left an imprint on the fashion sphere with brands like Acne, Ganni and Georg Jensen, it’s no surprise that Norway appears on the horizon of fashion with the country’s knitting heritage making a runway revival for AW18, creating the foundation of what defines aesthetic within the Scandinavian grid.

Scandinavian style is often considered to be minimal, layered and feminine – much thanks to the street style girls within the Scandinavian territory. This imagery is painted, borrowed and sold as an aesthetic that signifies the general style and desired aesthetic of contemporary Scandinavian women.

However, this mass generalisation of the true Scandinavian aesthetic is a fallacy. Scandinavia wasn’t always a minimalistic, layered and feminine realm – in fact, Scandinavia once was the epicentre of maximalism relating to their history of knitwear. This dates all the way back to 1814 when Norway separated from Denmark, the same year Norway’s regional knitting patters were created.

Knitwear to Scandinavians is a national treasure and during this season’s shows the much outdated tradition, identity and heritage was brought back to life by designers like Sacai, Y-Project, GmbH and Dior.

The most prominent designs are Norwegian styles like the Marius sweater, the Setesdal sweater and the Valdres sweater. These iconic Norwegian knitting patterns were altered and re-imagined this season. Glenn Martens at Y-Project incorporated the brand name, woven into the classic pattern, while Christian Dior Homme, lead by Kris Van Assche, used 90s infused tribals to the pattern. GmbH (one of whose founders is Norwegian) used graphic shapes, colour blocking the prints with traditional knits.

Knitwear was in many ways Norway’s first fashion export. This merging of cultural aesthetic within fashion has existed for decades, however Norway and its folklore have never properly been introduced to the higher scale of fashion. When asked about this Benjamin Huseby of GmbH explains that “It has personal context for GmbH, as I am Norwegian and Serhat is Turkish. The knits we made are literally made from reclaimed vintage Norwegian knits and Middle Eastern dad jumpers”.

But, why now? Why are designers adopting traditional arts and craft from a nation that has been left out of the fashion cycle for so many years? Norwegian knitwear has been exported globally – but never in a “high-fashion” way. “The Norwegian knits, are also strongly connected with the uniform of Eco-warriors in Norway (e.g., Natur & Ungdom), and my background as a young Natur & Ungdom member also informed our AW18 collection, in the way we often include personal memories and narratives into GmbH,” explains Benjamin.

“Hygge” has been on the decorative radar for quite some time now, usually connected to the interior design genre, but it appears as if it is moving towards fashion design as well. “It wasn’t used for any particular reason other than it feels old fashioned, looks pretty, appears comfortable and feels also very home-y,” says Glenn Martens of Y-Project. These words are also the same ones that define “hygge”, which complements the history and tradition of Norwegian knitwear.

The way Norwegian knit was demonstrated on the runway for AW18 can in many ways be an analogy of first generation immigrants with divided cultural identities. The knitwear was shown as a contrast and something unknown. “An article on BBC mentioned that a Viking burial gown possibly had a ‘Allah’ in Kufic letters woven into it. This inspired us to explore the long, and well documented historic relationship between Nordic countries and the Middle East, to also add an additional view on the current crisis between Europe and its immigrants. We hoped that this historic context would make clear that the hostility and fear towards immigrants is rather absurd, as this exchange of cultures and migration has always been going on,” says Benjamin Huseby.

Scandinavia has undeniably been on the rise within the fashion realm over the past years with new emerging talent, separate fashion weeks and established brands marking their place in the global market and slowly but surely these countries are representing something old, something new and something truly Scandinavian.