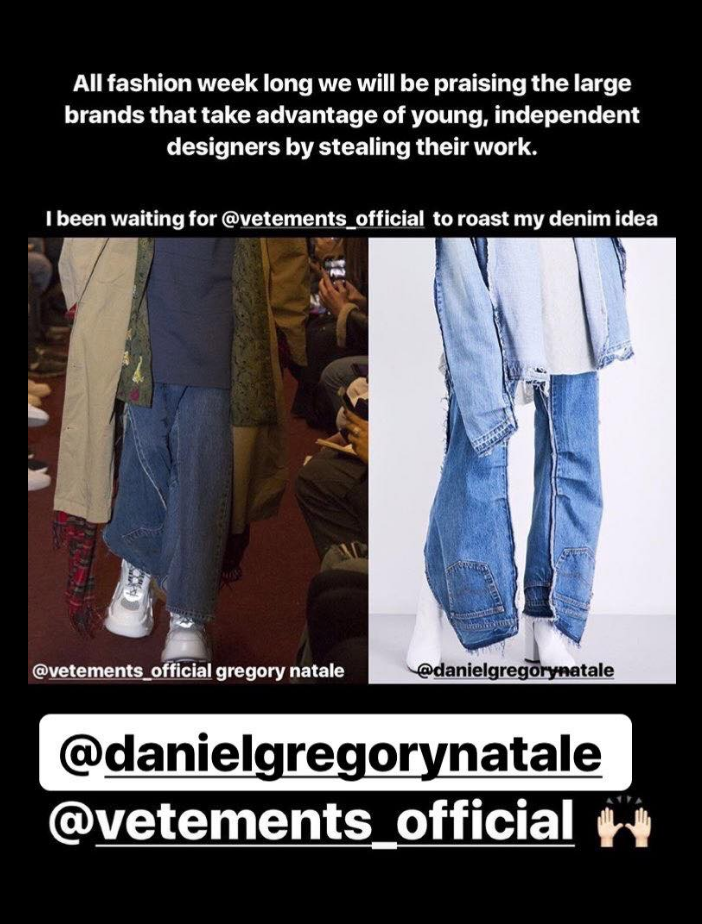 WE SPOKE TO THE YOUNG DESIGNER ACCUSING DEMNA GVASALIA OF COPYING

We all know about Diet Prada, who point out copying from subtle jabs to dragging people all the way out. We’ve heard the stories of brands and marketers coming to reputable fashion schools to “search for talent”, yet it seems that the search is more for what that talent can produce. The rumours churn with how they walk around the showroom, documenting every interesting or original stitch, every sleeve deconstructed in a new way, every creative use of a material to do something different with a zoomed image on the iPhone. When it comes to the arts, especially ones pulling from the zeitgeist, it can become a very sticky situation when trying to accuse someone of plagiarism – whether they are guilty or not.

With Vetements‘ latest collection, helmed by Demna Gvasalia, buzz was rife with its Margiela-isms. Most notably the Tabi boot reworking, which saw Instagram raging. Equally, Daniel Gregory Natale, a young designer who spoke out after the runway seemed to show a sort of replica of some deconstructed jeans he had previously designed. He ran with a story pointing out the fact that he was “waiting for Vetements” to hijack his piece. INDIE reached out to see what the designer really thinks about the recent rise in this discussion within the industry.

When and how did you come up with the design that has been copied, and how did the whole collection come about?

The denim was never actually part of my collection, or something that I was focused on when I was developing the collection. An opportunity came up to work with a vintage supplier that was finding the denim from all over New York State so my brother and I developed the denim pieces. We made the denim for a special project which involved hundreds of drapes and weeks of building denim in differentÂ ways on our bodies. Eventually we included it in the collectionÂ because the reception was so great. Now we reproduce the denim fairly often and they remain to be some of the best selling styles in the collection. We still make every single pair individually, in our studio in New York and hand pick each pair of denim we chose to reconstruct. It sounds corny but I really do feel like this builds an individual story for each piece and makes the characteristics between each pair unique, and poetic.

How did you first hear about Vetements’ copying?

I was sent the image from the collection probably about 300 times from different people in emails, texts, instagram direct messages. All of them were more or less telling me Vetements copied me and etc. Even my Dad sent me the image asking if they got the idea from me.

What were your first thoughts when you saw Demna Gvasalia’s recent collection?

I didn’t really think about it too much. I’ve never been a fan of Vetements and always thought of the trend to be a little bit boring. I feel like every season I see another article titled “Demna addresses copycat accusations”. I was flattered to see they liked my idea enough to use it without permission or the slightest bit of credit.

Have they since reached out to you or you to them?

I have not bothered to reach out. Not because I don’t want to, I’m just trying to focus on my new collection and moving forward. It would be nice of them to reach out being that they are a massive brand that steals from young designers all the fucking time.

What do you think about fashion’s current obsession with copying – is there a line between copying and just being inspired?

I just feel its played out. Demna said in a recent article addressing the Margiela copy that “Margiela was more of a philosophy than a design house.” Everyone is entitled to their own opinion on that topic, but fact is that Margiela IS a design house. Just because Demna feels otherwise, doesn’t give him the right to copy all of their work season after season. I mean, why does nobody see this? It’s shocking. A designer can be inspired by a philosophy, concept or design process, like Margiela, but it is very lame when the inspiration is the end product of the design approach. This is the difference between being inspired and copying.

If you could say something to Demna Gvasalia directly what would that be?

I don’t have anything to say to Demna, he knows what he is doing. The Vetements legacy is built on uninspired clothes that are referential and derivative of other designers.

INDIE Podcast: Hengameh Yaghoobifarah on free speech and being habibitus