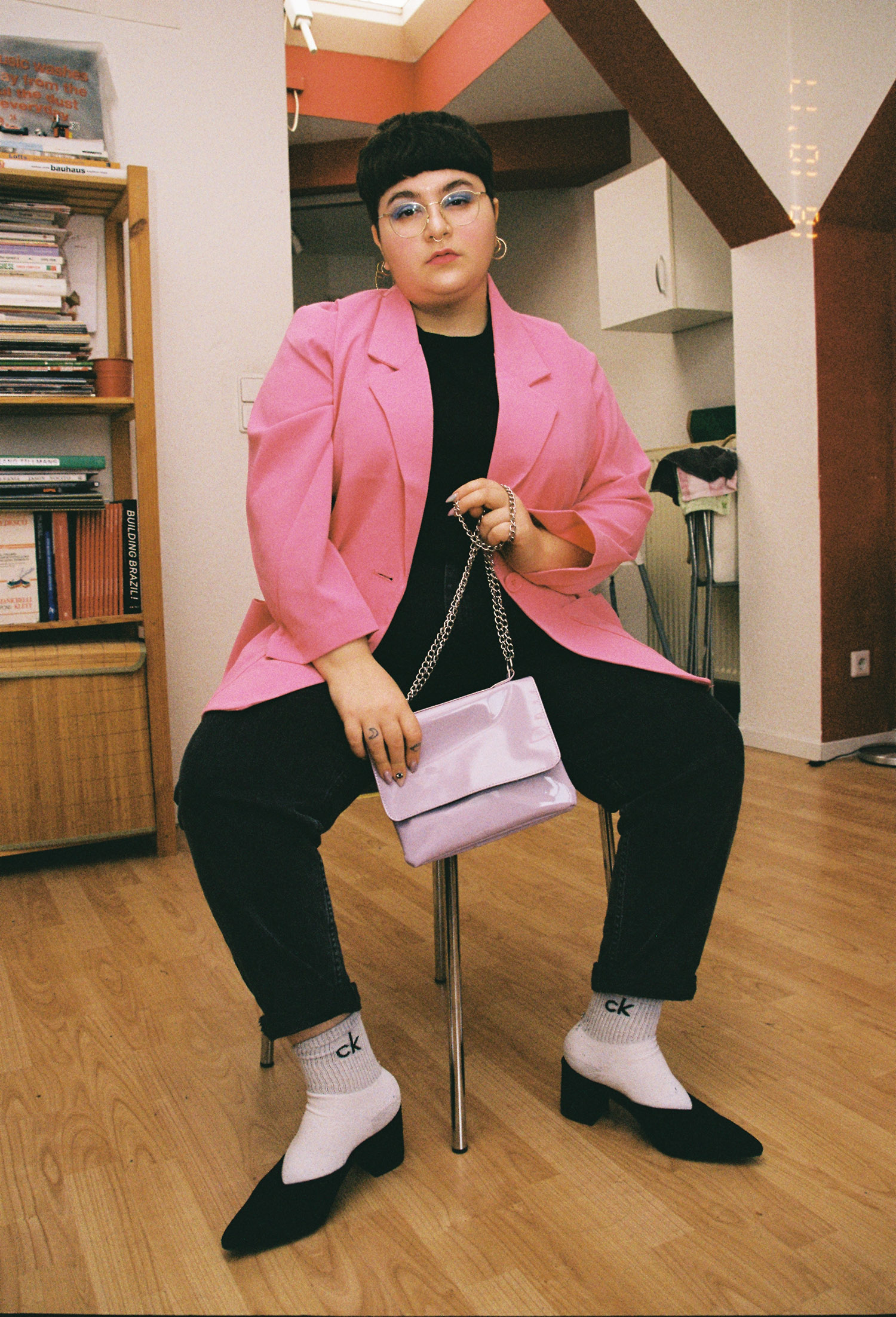 When writing for publications like TAZ or Missy Hengameh Yaghoobifarah’s perfectly manicured nails serve to destroy misogynist power structures and supremacist constitutions, they serve to play empowering tunes in clubs and on the radio. They serve to take the best selfies around and to spread scorpio wisdoms. In 2014 Yaghoobifarah moved to Berlin and found an active community that was forming an intellectual, left, and safe space for LGBTQ+ matters. Something they couldn’t find in their home close to Hamburg, where they were experiencing a typical German small town scenario: white and heteronormative. Limited realities of life, shit chatting, prejudices. There was not much space for otherness, or free unfolding of one’s personality without being confronted with poor understanding, cliché-ridden judgement, and verbal abuse. Affiliating with like-minded people the goal. Today they reached their goal. Today they educate.

Besides your work as a journalist, what other reasons did you have to stay in Berlin?

For me as a feminist it’s an interesting city, there are many groups and events, especially queer events. Every week something interesting is taking place – in comparison to other cities where, if you were lucky enough, there might be something happening once a month, which really depressed me. In Berlin, I feel less lonely. Here I can be more like me, here I can express myself better. The subculture isn’t as white and hetero as in many other cities. It took me a little while to find my community – queer and trans People of Colour, which  is something special as most of the times you don’t find a whole community but  a couple of people you get to know well. The search for like-minded people is what brought me here in the end. Also, in Berlin you can get lost in the shuffle. When I moved here my hair was dyed in pastel colours. In other cities, people would stare at me, here however it was super basic… 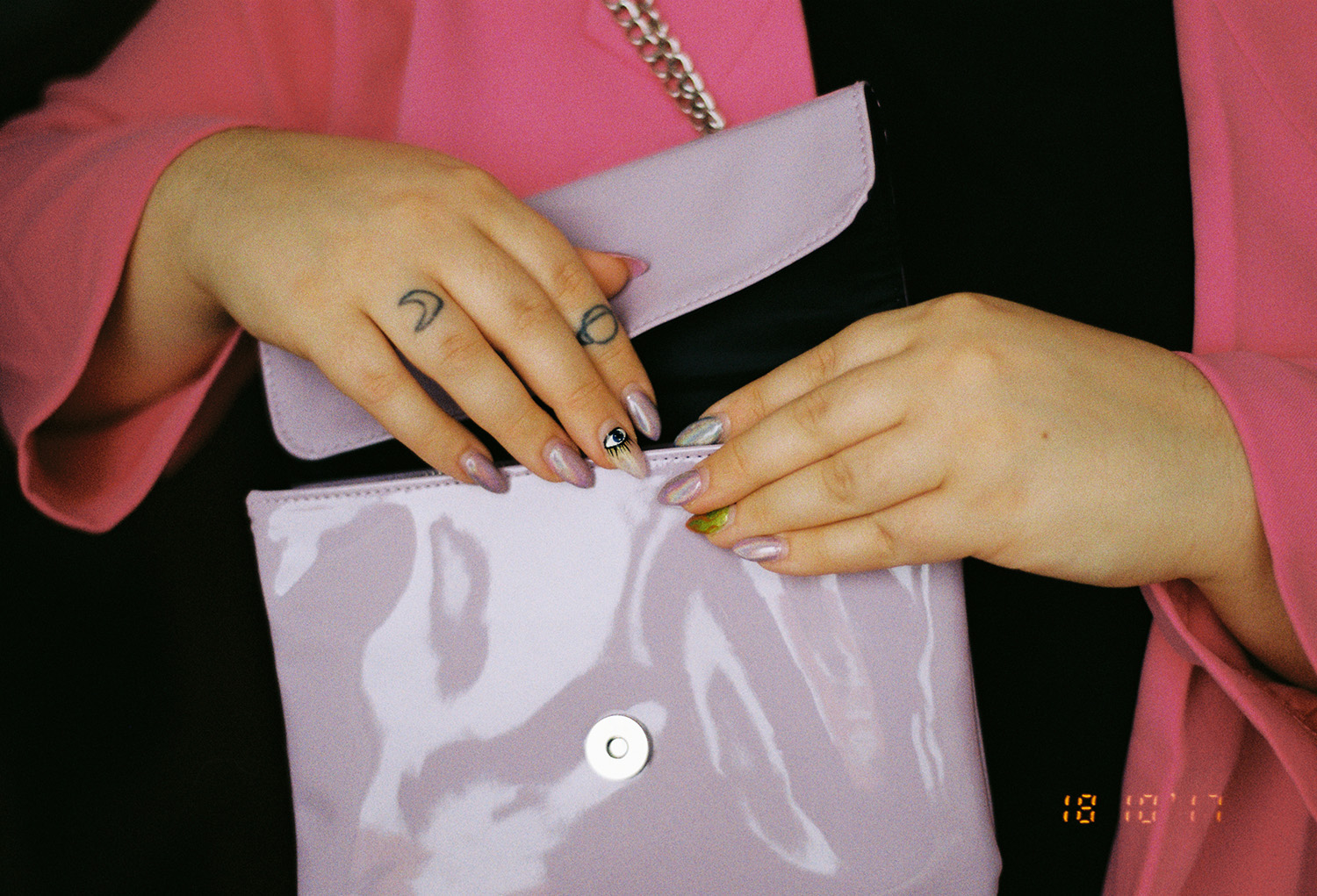 Can getting ‘lost in the shuffle’ come with negativities as well?

It depends on what aspirations you have for yourself. If you have an urge to always provoke, you definitely have to try harder in Berlin. I find that cool though, it’s a challenge, you can set new boundaries, new standards, you have the opportunity to constantly reinvent yourself, that’s something positive to me! Even though I can imagine it could be a huge pressure for others. However, if you’ve always been a weirdo or an outsider getting lost in the shuffle feels like a relief.

Have you noticed a shift in your mental wellness since moving to Berlin?

Definitely, but it always depends on the external influences. Living in a big city like Berlin can be really tiring, everything’s exhausting, it’s loud, it’s hectic. It takes you ages to get to places. When I lived in Freiburg I was more relaxed, I had more time for myself. But I think the reason for this is that I’m working so much here. Ever since I was a kid I had depressive episodes in my life, that, of course, didn’t go away. The stress that the city has on you makes me often feel like I’m in a tunnel, losing relation to the outside world, doing your thing, working a lot, ticking the to-dos from your list, only to realise that ten days have passed because your meds are empty. You could party the whole week, every evening there’s something going on, the keyword is ‘fomo’ and this can affect your mental health. There’s always a huge pressure, but I’m trying to switch this fear off.

Boundlessness is synonymous with Berlin, have you experienced this feeling of limitlessness?

Yes, and it leads to you neglecting your own boundaries. Approximately three times a year I have the feeling that I’m getting a burn-out. In Berlin, it’s hard to say no to jobs because you always think you can just quickly do it. You can work until late at night because the things you want to do in your free time start late anyway. 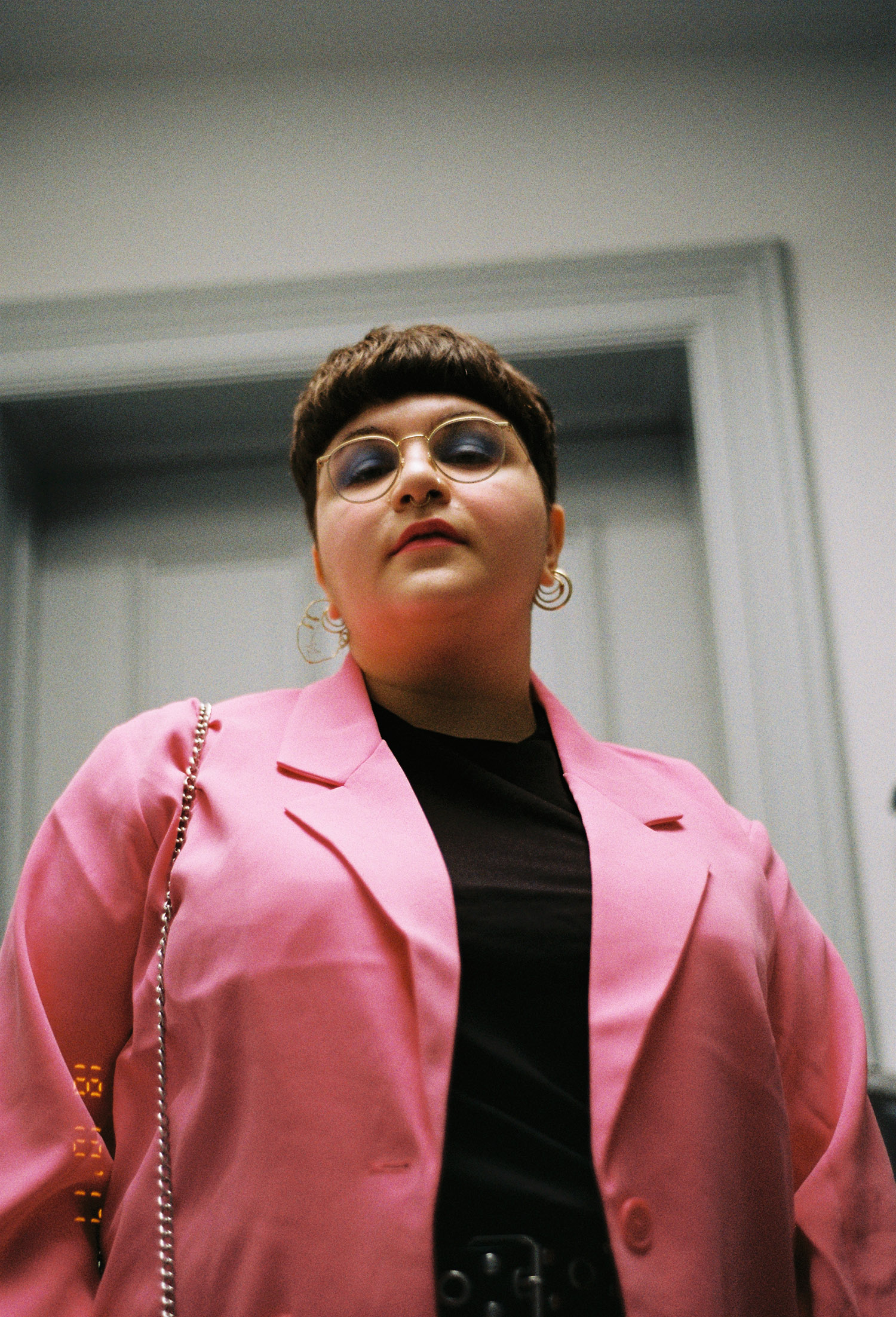 People say that Berlin is a city to leave when the realities hit. Have you felt these realities?

The winter’s tough. It’s grey, muddy, it leaves you with a feeling of stagnation. But I do have depressive episodes in summer as well… The people in Berlin are super flaky which is a symptom of the infrastructure, the freelancing, the general workload. I wouldn’t say that the friendships are less resistant, but sometimes the non-binding nature can be depressing. However, I do also profit a lot by living here. In Berlin, there are many non-binary people. The people in Berlin are – mostly – more open-minded and sympathetic when it comes to alternate realities of life. Since I moved here I’m not afraid of getting older anymore. I’m looking forward to the day I turn 30, then 40, because age doesn’t play a big role in this city.

What character traits does a person need to ‘survive’ in Berlin?

A strong personality. You shouldn’t be easily influenced by everything. Even though it is a negative term: if you are  a ‘follower’ it’s easy to drown in Berlin. Many young people come here, go party every weekend, abuse drugs, only to go back to their parents in the province because it was too much for them. I’m not judging people who take drugs, you just need to set your own boundaries and say no whenever you feel like saying no. You need to be self-responsible in terms of earning money. You need to be resilient, resistant. If you don’t feel well you need  to have the strength to get out of bed and participate in the everyday life. And you definitely shouldn’t hold Berlin responsible for anything that goes wrong in your life.

Do you think creativity and mental health are linked?

I got diagnosed with bipolar disorder type 2 and first thought: ‘Cool, just like Kurt Cobain.’ But then I realised it’s not that cool at all. When I had a manic episode I definitely was more creative, but since I’m taking my meds it decreased and is not that overflowing anymore. I wouldn’t say my creativity is burnt, I’m just drawing my inspiration from somewhere else: from the exhibitions I visit, the music I’m listening to, and the people I meet and collaborate with. Now that I have the chance to meet creative people in real life instead of social media I’m more involved in various projects, we develop new ideas together, I’m not alone anymore. In general, I’m most creative in spring and autumn, when everything’s in the mood for transformation… 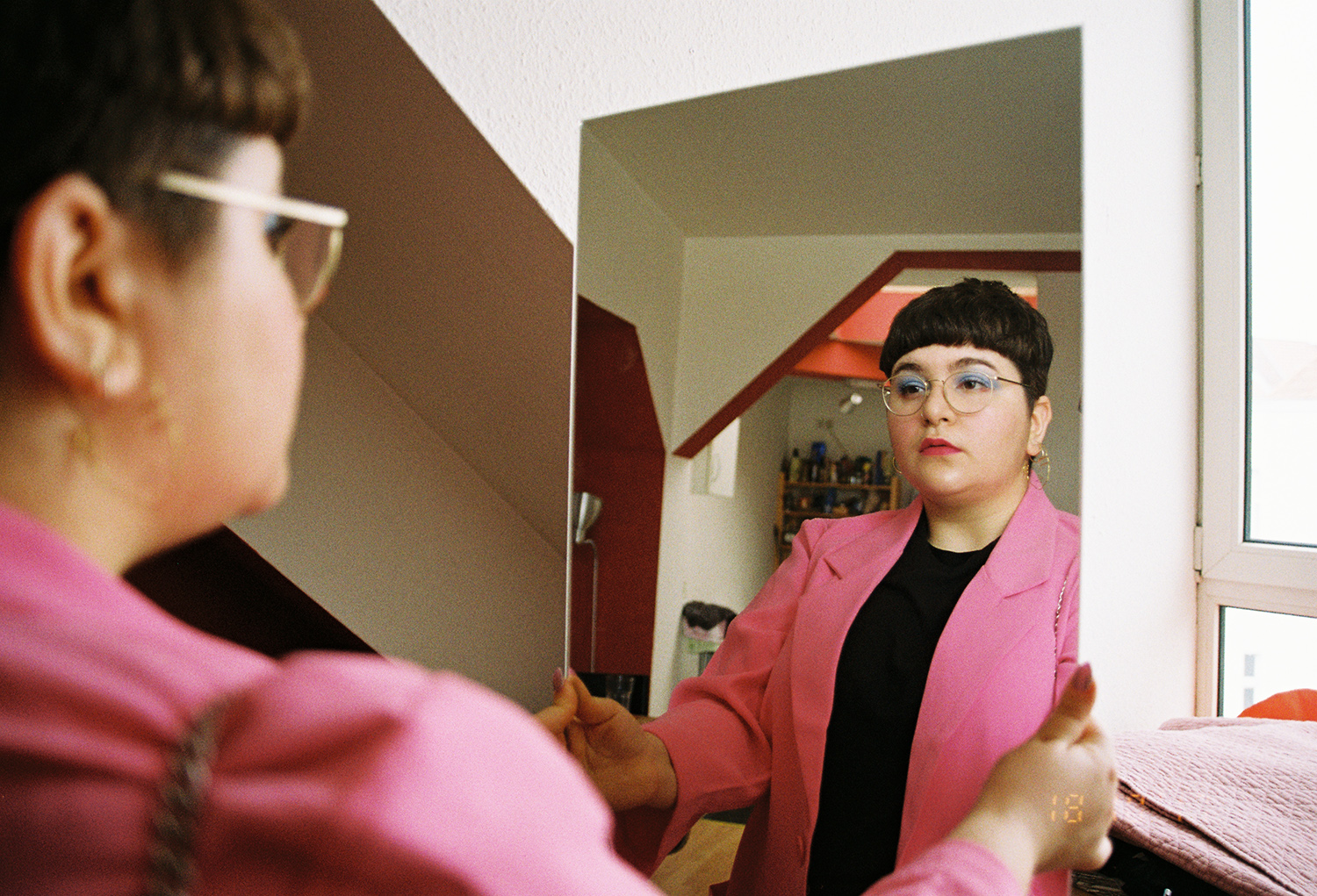