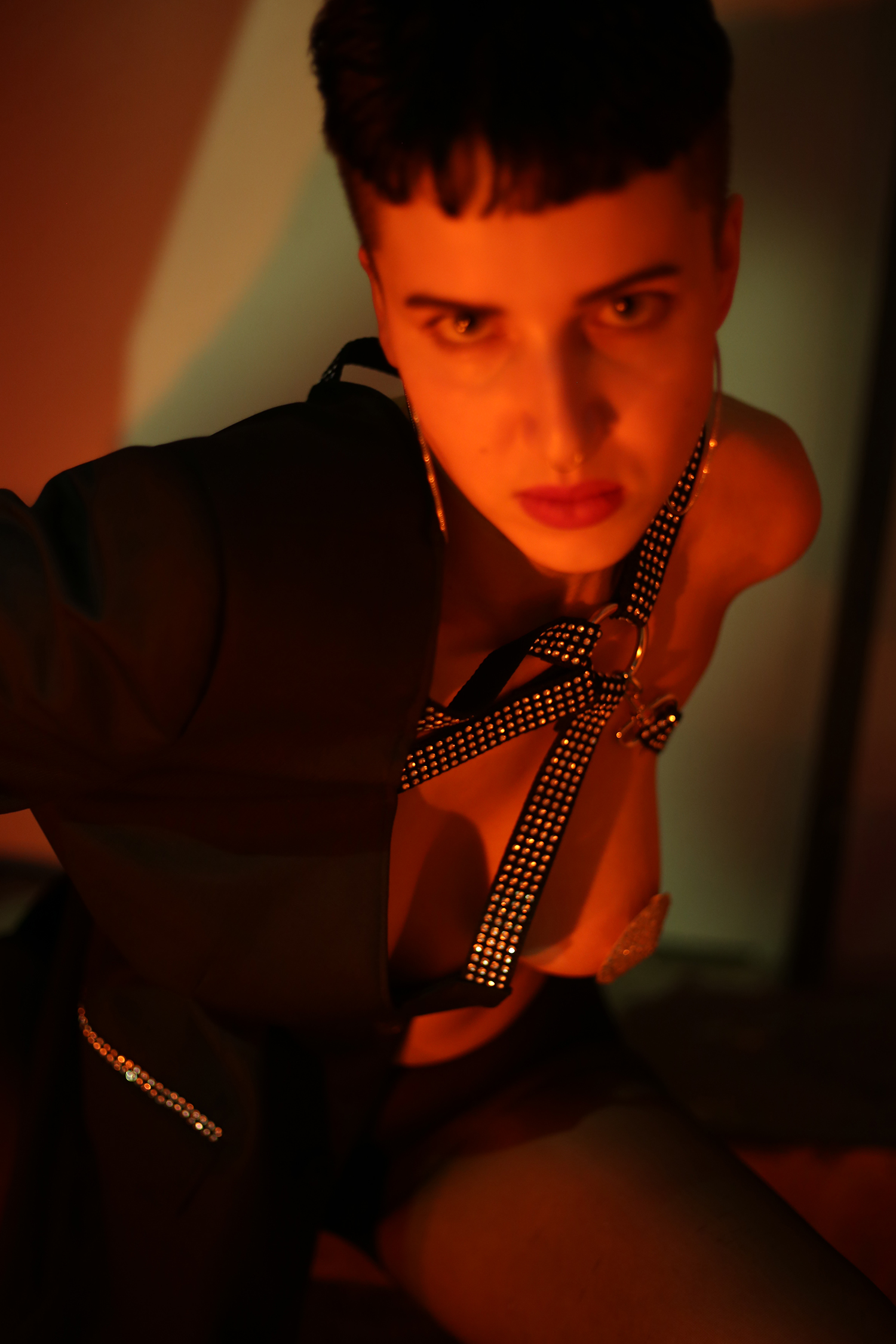 MEET LIL’ LAPEL, THE BERLIN DESIGNER RECYCLING SUITS FOR YOUR NEXT CLUB NIGHT

Up and coming designer Lil’ Ward Collins’ new collection Lil’ Lapel  is here to dress the people who make Berlin what it is: the clubbers. With explicit cuts and removable harnesses, conservative suits are reconstructed into bold statement pieces that celebrate the freedom of Berlin’s nightlife, all-the-while confronting the persistent waste problem within the fashion industry. We caught up with Lil’ in her studio to hear more about the collection, the video, and how Berlin has inspired her designs.

What made you decide to use vintage suits?
Suits are actually something I started working with in my Graduate collection, which was looking at empowering women who choose high-class prostitution as their professional occupation. I called them “Slutty Suits”, and they had the waist band open and one boob out etc. It was about taking the man’s suit and taking the power, and giving it to the woman. I wanted to carry on taking vintage suits and editing them, because it’s a good way of solving the waste issue in the fashion industry. Especially with suits, I can find them in really good quality, because people look after their suits.

How did this exploration then turn into Lil’ Lapel?
At first I wasn’t quite sure which route the suit-editing was going to take. I guess I partied a lot, kind of got inspired by the club scene in Berlin, and decided that those were the people that I wanted to dress. Actually, at one particular Berghain day in the summer, I remember seeing this amazing guy in a suit in the sun, and being like “Are you not hot?!”, and he just said “it’s worth it”. He just looked so fucking good, and I thought fuck it. It was a good combination of everything, and that’s why I made these kind of harness-suits. I see them on clubbers, especially just the harnesses on their own because you get really hot. But also some point I would like to see them worn in day-to-day life, to the office! Maybe not if you work in a bank, but in a creative office. You could wear a polo neck underneath or something, whereas in the club you’d wear nothing underneath – I think they’re multi-functional.

There is quite a bit of pressure on fashion students to found their own brand and build a career right after graduating – What made you decide to jump right into the industry?
I think, at the end of the day, once you graduate, for instance, you have to go, “OK, am I going to go into retail, and dress what people wear most days?”, but it’s a T-shirt, it’s a Jumper, you know? Or, maybe you can intern for a while and maybe get a job in a high-luxury brand, where you might have a bit more freedom, but it’s also very competitive. Instead I kind of went “I want to dress the people that I’m partying with”. People are putting so much thought and effort into when they go out partying. I thought, ok I’ve been doing a lot of partying, and you know what, this is what I want to do right now, and this is who I want to dress. I couldn’t think of doing T-shirts and stuff right now. I think Berlin’s freedom and party scene is what’s influenced what I want to do and who I am right now as a designer.

What’s the process when you’re designing?
At first, I was going to take a suit as they are, and edit them all individually, with each thinking “ah what am I going to do with this one? Let’s make all the designs different, add all the trimmings different”, and then it took me a week to do one suit. By the time you design it, and buy all the bits, it’s just unfeasible, and also un-cohesive. So now it’s gone down this more fetish route – or at least for this collection.

What I want to do now is to make a fully functioning website. How I want it to work is to have an archive of the vintage suits I have, and to allow the customer to pick their favourite (pre-modification) in terms of colour, style, and size. Then, they are able to pick their favourite design, and which colour way they want. This makes each piece unique and will be obviously made to order. But for now, people can email or DM me on instagram!

Suits have become very much a staple in every wardrobe – Would you describe the collection as genderless?
I would say so. When I design these clothes I don’t have a gender in mind. They are predominantly men’s vintage suits, purely because these give me more fabric to work with and are less fitted. But the clothes are for who ever would like to wear them, and within the Berlin clubbing scene, this is (predominantly gay) men and women. I also think the variation of a diamanté or a plain harnesses works to appeal to all genders.

Do you think this kind of “explicit” collection would work in a different city?
Probably not quite so well! This collection is a reaction to Berlin’s unique party scene, designed with the clubbers in mind. Of course though, clubbing happens worldwide so hopefully there is no reason why it couldn’t be received in other cities (in countries with liberal values, at least). I could see it working in London, New York, or Melbourne for instance!

How have your designs been received so far?
As a way of self-promotion I have been wearing them to parties and they have been well-received! Especially the diamanté’s, they catch people’s eye amongst a sea of black leather.

Did the models you chose for the shoot also come right from Berlin’s club scene?
An important thing for the shoot was that I didn’t want to use models that were size zero – the idea was that the video was going to be really good dancers that I’ve danced with, like that sort of Techno dance. Seeing as it’s who it’s aimed at, I thought I wanted them to be the stars. It’s a mixture of friends, or just really cool fucking people I’ve seen on Instagram or met out in clubs, and who are regular clubbers. It’s real people, who are there for the music and part of the night life.

It sounds like this collection slots in as a part of the wider culture…
It’s such a community. We watched this documentary about the beginning of techno in Berlin. It’s was very much like, this is the whole scene. Whether it’s people starting clothing brands, or people make the interior, or people make the music or whatever, it’s about everyone going, “we need to make this special, it’s fucking sick”. Everyone contributes to the scene in different ways, and I this is how I’m doing it.