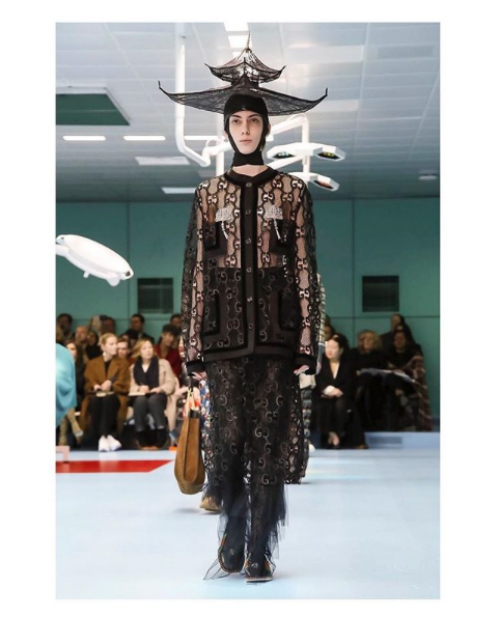 We get it. The lines between cultural appropriation, inspiration, and appreciation are sometimes hard to see. In the fashion world, in particular, they can become even more confounded. But when a fashion house as big as Gucci starts parading models around in rip off turbans and hijabs it’s fair to say that a line has been crossed.

For its Autumn/Winter 2018 fashion show in Milan today, the brand showcased a complete disavowal of minority groups by having a group of majority white models (78 out of 90 models to be exact) walk down the runway wearing clothes stolen from other ethnicities and cultures. A white man wearing a bindi, white models in hijabs and turbans, and a white woman in a headpiece designed to look like Chinese architecture made the offering seem like a game of “how many cultures can we appropriate in one show” as Instagram users like @fixated_f and @moremodelsofcolor quickly pointed out.

London based photographer and editor Faiyaz shared his thoughts with INDIE: “When I first saw what looked like headscarves come down the runway I tried not to think too much of it. Then came the turbans and niqab-like face masks and I raised an eyebrow. I thought perhaps I’m overreacting. Then came the bindi (paired with matching kohl-lined eyes), the tribal inspired jewellery, a literal third eye and various borrowings from several cultrues, watered down and made palatable. Immediately I voiced out my initial reactions onto my Instagram stories and was met with mixed reactions. The ones who didn’t see what I saw said that they were just appreciating culture, or that it’s not a big deal, or that there’s no copyright on these things. However, this is beyond the superficial – there’s a long history of dominant cultures suppressing those of coloured people. Gucci got to pick and choose from cultural imagery all the things that are aligned to their ‘fantasy’ narrative without any consequences, and then so easily put on white skin. What message does that send? That it’s ok to wear a hijab if you’re young, beautiful, rich, and white but not if you’re actually a muslim or a person of colour? It may seem like borrowing or being inspired by something seemingly superficial, but what’s not being borrowed is the social implications, the prejudice and the internalised racism. Someone who buys and wears the Gucci scarf that’s ‘designed to be worn on the head’, wears it without stigma. They won’t know what it feels like to be stared at or harassed by strangers, because they have the option to take it off when they go to an airport. People of colour don’t have the same convenience. And the same goes for bindis, turbans, and everything else that was appropriated. It’s 2018, all you need is a little empathy and the internet to know where the line needs to be drawn.”

Right now, it seems we can hardly go a month without a brand or celebrity sparking controversy over cultural appropriation. Just last month Kim Kardashian got slated on Instagram after posting a selfie with box braids and the caption “Bo West” – referring to Bo Derek, a white woman who sports cornrows in the 1979 film 10. With its last resort collection, Gucci itself was publicly called out for appropriating the style of Dapper Dan.

It feels like cultural appropriation has become so ubiquitous that many have forgotten its real meaning. In its purest form, the term can be defined as “the act of taking or using things from a culture that is not your own, especially without showing that you understand or respect this culture”. Herein lies the most significant part: cultural appropriation exists only when the subject clearly disregards or disrespects another culture. It’s the point at which copying cultures crosses into the realm of the offensive.

As the dominant power, Gucci as a global brand has an obligation to recognise the historic legacies of such clothing items and to be aware of the pitfalls associated with “borrowing”. Through having models of caucasian complexion wear garments that belong to different cultural and religious groups, Gucci managed not only to adhere to this definition of cultural appropriation but to also succeed in exploiting these groups at the same time. Attempting to make money out of these clothes and out of these minority groups demonstrates ignorance and failure to understand the complexities of “borrowing” from others.

On the #GucciFW18 runway: a silk scarf with horse print designed to be worn on the head and a leather bag with Horsebit and interlocking G detail reveals a tiger head detail inspired by a vintage Hattie Carnegie jewelry design. #AlessandroMichele #mfw