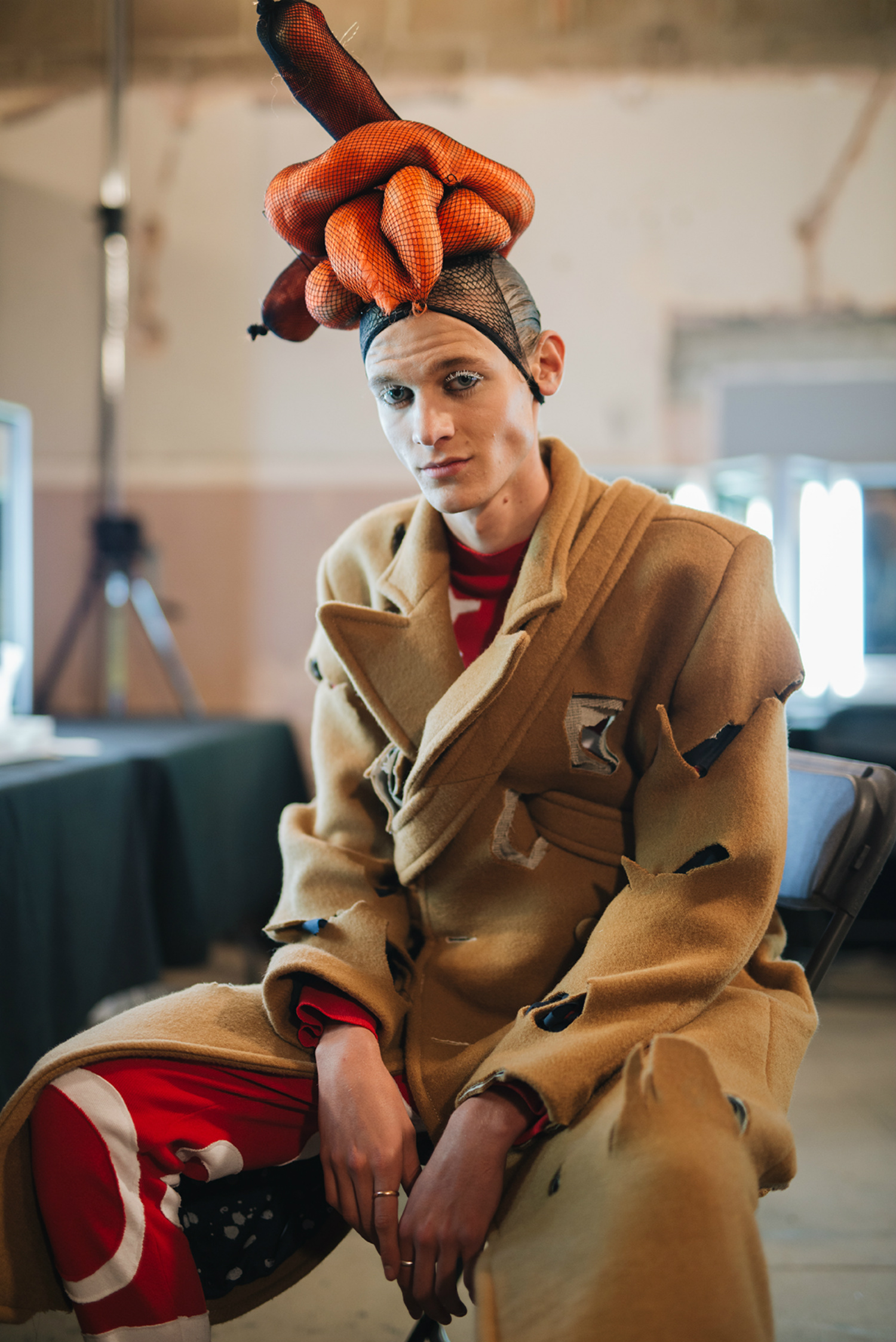 HOW DESIGNERS MADE THEMSELVES HEARD AT LFWM

This is what the press release of Eden Loweth and Tom Barratt, the design duo behind emerging gender-questioning label Art School, read at the top. A statement, as descriptive of the label’s AW 18 offering shown as part of the MAN initiative by Fashion East and Topshop during London Fashion Week Men’s on Sunday as it is of the fashion week itself – which saw a demand for standing one’s ground, a literal outcry even at times, guiding the clothes on more than one catwalk. And with some of the biggest brands of LFWM absent this season – Vivienne Westwood, Burberry, and J.W. Anderson amongst them – there also was enough opportunity for these voices to be heard.

For Lowet and Barratt, this subversion of softness most directly showed itself in the duo’s clothes and core: With their non-binary and queer friends as the starting point of the brand’s understanding of fashion, their clothes get designed and tailored on the body as opposed to laying them flat on the worktable – an approach they have since coined “soft tailoring”, as the garments are not only moulded around the wearer’s body, but also in relation to their personalities, past, and present.

Equally incorporating a call to toughness into his designs and show was recently awarded “Emerging Menswear Designer” Charles Jeffrey with his second standalone offering. A show, characteristically drawing on theatrical influences and historical references, but this time layered with a very vocal statement for outbursts – emotional and colourful. Titled “Tantrum”, Jeffrey’s AW18 LOVERBOY collection saw members of the “Theo Adams Company” screaming and spitting at the models from the middle of the catwalk. Inspired by Alan Downs’ 2005 book “The Velvet Rage: Overcoming the Pain of Growing Up Gay in a Straight Man’s World” it was exactly that – an outrage against prejudices and boundaries, with clothes envisioned as “shields… to protect oneself from predators”.

Astrid Andersen was also looking to break boundaries – with a bit of help from the past, that is. The Danish-born designer focused on the Buffalo era in London during the 80s, including images taken by Mark Lebon in her collection, to underline the notion of challenging conventions and rules. Bethany Williams, presenting her film “Women of Change”, teamed up with Fondazione Zegna and London College of Fashion to encourage creating clothes for change and a positive impact, with percentages of the profits donated to San Patrignano and the LCF.

Looking outside of one’s own bubble also drew through the shows of Cottweiler and Wales Bonner. The latter looked to New York artist Eric Mack, fusing his work with the notion of a sailor on the sea, resulting in nautical jackets and a predominantly blue and white colour palette. Ben Cottrell and Matt Dainty on the other hand focused not on who is conquering the waves, but on what lies underneath them. Choosing the Natural History Museum as their venue, the duo behind Cottweiler referenced a trip they took to Slovenia, where they went on a cave-diving trip, and fused these memories with their signature sports- and outerwear core.

Looking to the width of the ocean, one might call these approaches escapism – but they were met with an intriguing reflection of the world around us, a literal call to action as urged by Charles Jeffrey, and a believe in one’s own emotions, experiences, and memories as still one of the best sources for strength.