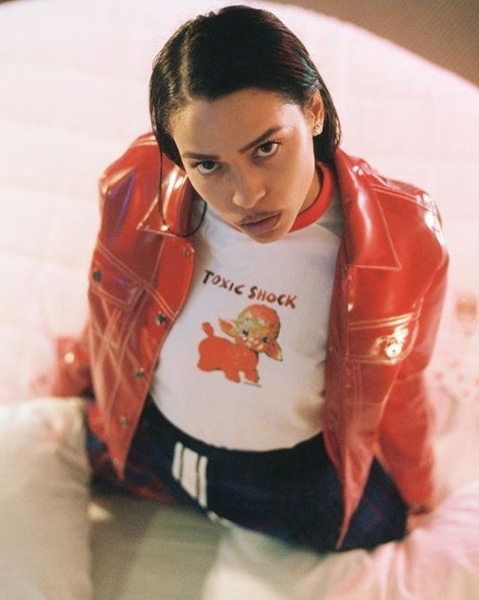 FOUR TIMES PRINCESS NOKIA WAS THE HEROINE WE URGENTLY NEEDED

Destiny Frasqueri a.k.a. Princess Nokia has never been afraid to speak up in support of causes she believes in, or on behalf of those assaulted by loud-mouthed bigots. The Afro-Latinx queen is occupying the freshest face in hip-hop by courageously celebrating her multicultural background in New York City. The fiercely independent artist has taken to her socio-political blogs and Twitter to express her radical intersectional feminist agenda and distaste for misogynoir behaviour, teaching us the importance of “never letting white boys disrespect us” and encouraging us all to speak aloud when men pre-ejaculate toxic slander. Having just stopped her show to call out gentrification in London, we thought it was more than time to highlight all the times that Princess Nokia has stood up to racists and sexists or just generally been the urgent heroine that we all admire.

Social media is vastly pre-occupying disturbing videos that thousands engage with by hitting up the retweet. The majority being inapt opinions from idiots who would undeniably make the world a better place if they had a mute button. That being said, earlier this year, Princess Nokia unapologetically shouted, “get the fuck out!” at a racist who was chanting racist words on a train in NYC. The visibly drunk man was attacking a group of teenage boys when Princess Nokia felt obliged to come between the attack and stand up to the discriminator by throwing hot soup in the offender’s face. While someone stole his bag, another smashed his phone and he was left on the train platform looking pretty worse for wear, so if there’s anything you can learn from this: Don’t be a racist.

New Yorkers kicking racists ass one at a time pic.twitter.com/yRUBD3kXIs

During a charity fashion show at Cambridge University this year, Princess Nokia ended her performance early and punched a student, three times. According to FLY reports, a Cambridge organization for non-binary people and women of colour, a white male student was allegedly verbally harassing her during her performance by mouthing dirty obscenities like, “show me your tits!”. The feminist rapper said, “she does not condone violence” but has “zero tolerance towards instances of sexism and sexual harassment”. The alleged student denies that he ever provoked Princess Nokia to begin with, and claims “I was standing in the audience and was told by a fellow audience member that the name of the performer was Abigail”, and given that he was so called having a blast, he shouted out, “Let’s go Abigail!” (Even though her real name Destiny, resembles near to nothing of the name Abigail, but at least you tried).

Sick Zine made by @artfonfa

Last weekend, Princess Nokia paused one of her gigs in Brixton to explain to her fans the effects of gentrification within the Latin American community in London. The Latin Village in Tottenham, North London, has been facing gentrification issues for the past decade, and little to no one is doing anything about it. An indoor market there has the second highest concentration of Latin American businesses in London and is being threatened to be taken down. The intersectional feminist group “The London Latinx’s” have been tirelessly protesting to keep the safe space for the non-binary, with the help of Princess Nokia.

Journalist Maria Cabrera announced the “Seven Sisters Regeneration plan”, with her upset towards the government unwilling to appreciate the Latin culture that’s lives there. Deeming their culture insignificant compared to the ‘multi-cultural’ city that the government is proud of. Not only did Princess Nokia explain the campaign of the Seven Sisters Market, she also called it a “wonderful cause”, then went on to explain, “I am an Afro-Latina woman, if you want to respect me, then respect the real Latino community that is existing here. Educate yourself, understand that this is a population that needs a voice, that is underrepresented, that needs more knowledge, and needs more support.” What a woman.

When Frasqueri started her online audio fanzine “Smart Girl Club” it offered her a space she could talk about urban feminism, relationships, sexuality, spirituality, music, art. and make fun of herself. Finding inspiration from the riot grrrl movement Princess Nokia creates a safe space for women, and people of all gender expression to come to the front during her gigs, saying “Men standing in the back – it’s what’s right. All the shows that you go to, men would just be in the front in droves, moshing and they have such a brotherhood – which is beautiful and very commendable and I respect it very much. But it’s like a thousand men with their sausages out and it’s a real testosterone fest. Girls are, like, quivering in the corners, holding on to their purses, and they deserve to hold so much more space than that. A Princess Nokia show is this place where girls can do that and take the space in the way that men and the brotherhood do.”

Header image via Princess Nokia x Made Me

MEMES, MENTAL BREAKDOWNS AND ME: Kai-Isaiah Jamal on surviving 2020 as a Black trans body