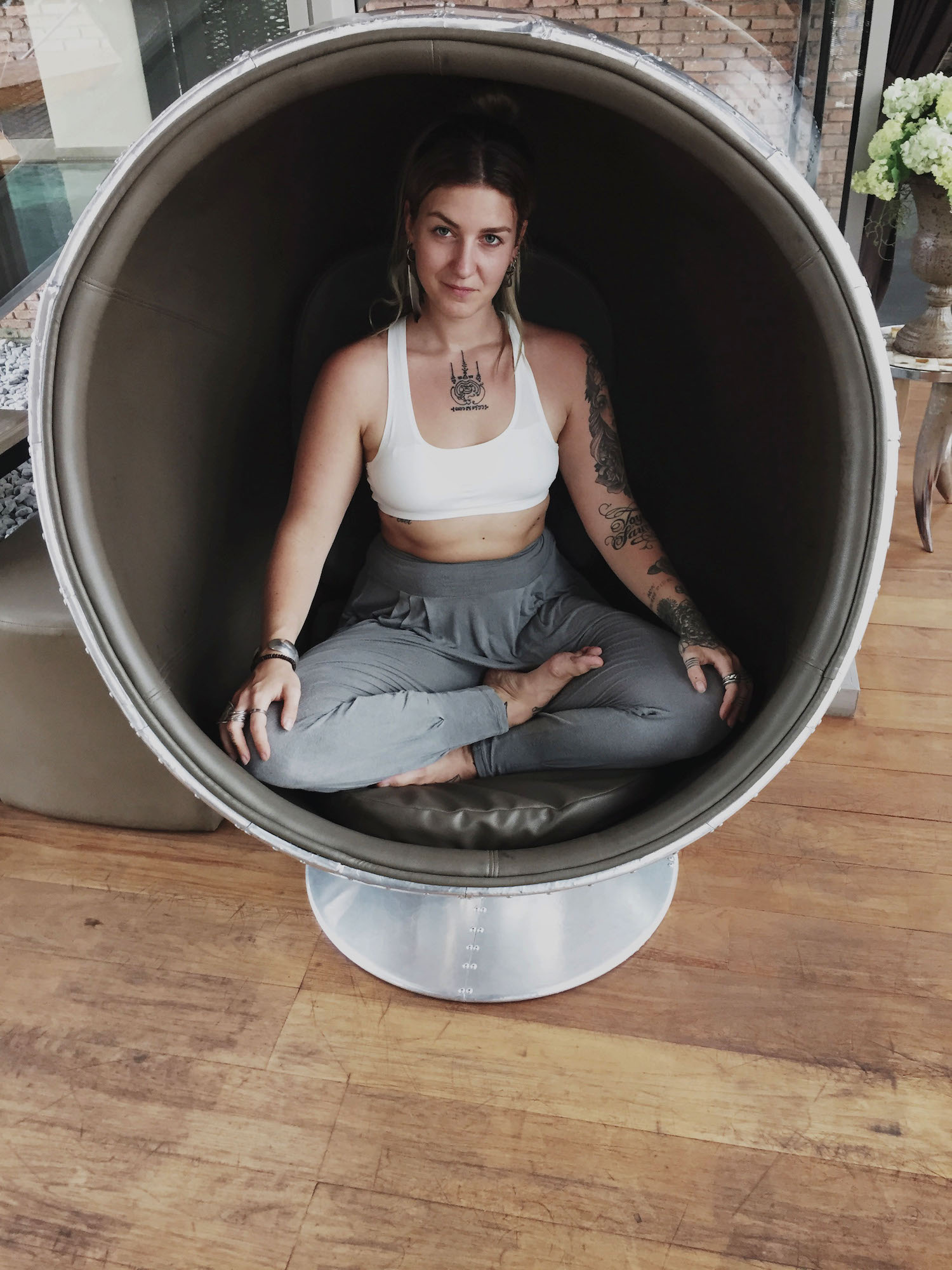 Fast-paced Western society requires us to make sacrifices every day. People are expected to keep up with ever-growing pressure in their jobs, aspire to unrealistic ideals propagated by social media, while their sense of what really makes them happy slowly becomes more distant. Simona Marini was one of them, but she didn’t realize it until her body started to rebel against her busy lifestyle as Head of Design in a London agency. It was only when she started doing yoga that she noticed an improvement in her health – the turning point that made her see the power of self-healing without being dependent on conventional synthetic medicines. After this moment of awakening, Simona had three sessions with the frog poison Kambô that spurred her on to leave her comfort zone: she quit her job and travelled to Bali to train as a yoga teacher. Today she lives in Berlin, working as a designer, tattoo artist, and teacher, continuing to decelerate herself in order to further improve her environment.

You’re a teacher for “shamanic breathwork” – what exactly does that mean?

You lie down, either in a group or alone, and the breathing technique is to then breathe in and out without breaking – quick, intense breathing, but not hyperventilating. The faster and harder you breathe, the deeper you go into yourself. You essentially mess around with your brain, bringing it into a state in which DMT just begins to naturally pour out, and through this you can have all sorts of different trips. You don’t know where it will take you – you just have to go with it. When I first started doing it, it always took me a long time to get anywhere. One of the first times I suddenly saw a gateway, enormous like in the Middle Ages. It was ajar and then all of a sudden, my cat walked out. She had actually died six years ago, and I never really had the chance to say goodbye. I understood very clearly that she had waited here for me, so that I could let go. It was so interesting, I see so much potential in showing people that they can heal themselves, and that they don’t need medicine to do it.

Healing the body and soul without pharmaceutical medicines… Did you feel the same effect when you tried Kambô?

So far I’ve taken Kambô three times in one moon cycle. It was more like a cleanse – it’s not a hallucinogen. It’s said that when you take Kambô three times in a single moon cycle, the spirit of the frog stays in you, that everything changes after that, and that the insights keep coming. The medicine helps you to heal. After that I quit my job and booked myself in to train as a yoga teacher in Bali. I’m certain that the Kambô gave me the strength to really carry out these changes. I’d wanted to do it for some time, but I had never been able to push myself out of my comfort zone. It’s definitely a medicine for fighters. It’s a lot about letting go. The medicine also flows through your body, not like painkillers for example, which shoot through and destroy a lot of cells while they’re at it. Kambô works by opening the cells, collecting all the toxins and poisons, and bringing them to the stomach. You drink two litres of water so that you then have to vomit; sometimes people pass out. It is said that Kambô is one of the strongest natural anti-inflammatories. It can be used to fight over 600 diseases. It doesn’t have any hallucinogenic properties though. It’s not unheard of to have some kind of vision during the session, but that’s not typical.

In contrast to Ayahuasca which is known for having a hallucinogenic effect.

I was also interested in Ayahuasca for a really long time, but hadn’t had any experiences with hallucinogenics. It just never felt quite right. I feel very strongly that this medicine comes to you when you’re ready for it. Something like that doesn’t just happen coincidentally. When I came back from Bali I had a spiritual low, and I was offered Ayahuasca at exactly the point that I decided that I was ready to start working on myself. Since then I’ve done it three times and it’s totally opened my eyes. I discovered the universe by myself. My body became so sensitive, I could feel every organ in great detail. I realized that I had to work on myself, and on my discipline first, in order to be able to help other people.

Where did you do the ceremony? Did you have a shaman to guide you through the session?

The shamans at the Ayahuasca session were a couple from Argentina, who have been doing this for over 20 years. He learnt from shamans in Peru. It was outside Berlin, on a farm, right in the middle of nature. I had a lot of insights, and after every session I wrote four or five pages in the notebook that I always had with me. In my normal state I would never have been able to get these phrases onto paper like that. Ultimately, you are the pupil and the medicine is the teacher. By the third session I had to vomit, and the shaman said, “Always look in the bucket, because if you’ve let something go then it will always have a face, either someone that you’ve let go, or emotions that you’ve released, or events that you’ve processed.”

Did people ever criticize you for performing these traditional healing rituals? And even for teaching shamanic breathwork yourself?

With the breathwork I’ve had a lot of positive feedback, primarily because it doesn’t involve any substances. I also feel like a lot of people are sent in my direction, looking for advice. With Kambô there were a lot of very critical people who really tried to drag me through the dirt about it or made fun of me for it.

So you don’t appreciate the hype that Ayahuasca has around it at the moment? What do you think about organized trips to Peru, for example, where tourists can take Ayahuasca?

I think it’s good. My breathwork shaman already said the time would come that many Westerners would go to the shamans to learn from them, in order to bring healing back to the West with them. The West is ultimately poisonous. My Ayahuasca shaman told me that you shouldn’t look for the medicine, but that the medicine will find you when it’s the right time. That aside, you have to make sure that it comes from a trustworthy source, because a lot of so-called shamans just order it off the internet. Even on all these places that tourists travel to, other plants that have a different purpose are mixed in. The point is not to just take something. If you can’t absolutely trust the person with whom you’re doing it, you should get up and leave, because you’re giving all of yourself to them. 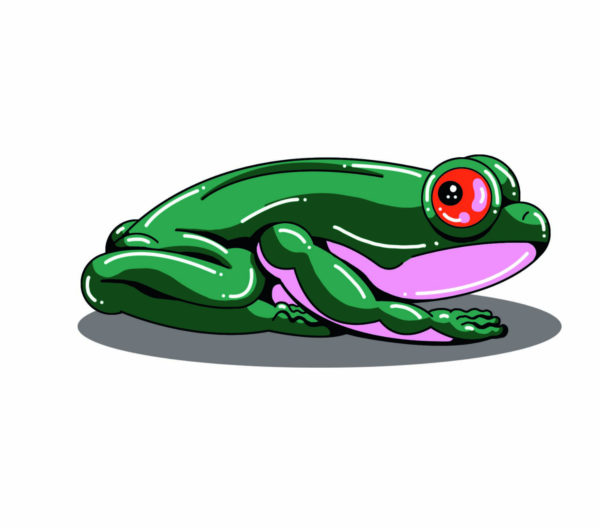 Kambô is traditionally used to clean and heal the human body. It is said that the venom scraped from the giant monkey frog’s skin can be used in the treatment of drug addiction, migraines, depression, and even cancer. During the session the venom is applied by burning tiny holes in the skin with a stick. Patients then vomit the several litres of water drunk on an empty stomach prior to the ceremony.