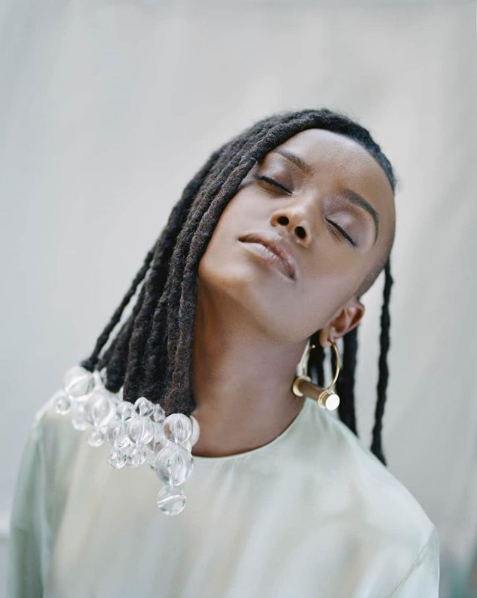 Although a fashion designer by trade, Londoner Mischa Notcutt has become one of the figureheads for all things multidisciplinary. Whilst working with one of the most definitive voices of our generation, Kelela, Mischa dabbles in casting and styling for emerging designers, the likes of Liam Hodges and Cottweiler. But the list is not over. The multihyphenite boasts an impressive track record of shows and radio appearances on Dalston’s NTS and across the world.

Marking the release of Kelela’s video for “Blue Light” off her latest record, “Take Me Apart”, we chatted to Mischa about her journey as a stylist, casting agent, and creative director. Here, fresh off her trip to Berlin with her homegrown music collective PDA, Mischa opens up about her thought process when it comes to branding and much more.

You have always favoured an approach that is thoroughly multidisciplinary. Having studied fashion at Central Saint Martins, how did you first branch out into styling, casting, and music?

After finishing my degree, I knew I didn’t necessarily want to go into design. I started down the usual path of interning and assisting casting directors and stylists. I love doing multiple things. I have always felt hindered by that saying “jack of all trades master of none.” Not so long ago, I was enlightened that there was a part to that saying that people miss out on, it ends with “but oftentimes better than a master of one.” All the disciplines I have really compliment and help me with whichever one I am focusing on at that time.

You have styled music videos such as Skepta’s “Shutdown”, collaborating with director Grace Ladoja. Would you say that working on music videos helped you progress into creative direction?

With styling, you are often involved with the casting and creative from the start. It feels quite a natural progression. Music videos definitely have helped hone in on my craft as there are more things to think of, but I find them to be very misogynistic places to work and that has made me very cautious about putting myself in that dynamic.

What are some of the ways in which the local music scene has shaped your work?

I’m totally inspired by the people around me and always interested in new music. I feel like London is such a hub for creating and embracing that. Music and fashion can really go hand in hand. For example, Cottweiler who I work with. Music plays such a big part in their work.

Your NTS show “PDA with Mischa Mafia” boasts a diverse range of guests and genres, going hand in hand with your previous work through TM Casting. What do you see as the underlining message that you seek to translate through your creative output?

PDA first started as a club night to put on our favourite DJs and so that we could play any music we like. I run it with musician Larry B and Cracksteven (video director Akinola Davies). it’s a place where people can come together and dress up with a sense of community. Like a church! In London, that’s really important. It felt very natural to do a radio show which extends that…

I’ve been doing casting for around seven years now and have always loved finding new faces, characters, pushing diversity to be in shows, editorials, campaigns, or videos. Now, I continue to do it under (Club) 11 Casting. Casting also gives me the opportunity to work with designers on their shows which I love so much. It’s amazing to see a collection come together.

Currently, you style and art direct for Kelela. When did you two first team up?

I met Kelela through my ex boyfriend. I was already so struck by her music, like everyone else. What an amazing body of work! You may think I am biased, but she has one of the best voices of this generation.

What were your contributions surrounding the latest release, “Take Me Apart”, and does your work extend into aspects such as stage design?

I am Kelela’s creative director, but I view it more as a collaboration with her on all the visual aspects of the release. It’s so amazing to work with someone who has a clear vision of what she wants. I am so lucky to work with such an incredible artist.

“LMK” is one of the most iconic videos released this year, undoubtedly. Could you tell us how the concept for the video came about? Did you look for references across film and music, or did the inspiration span beyond those mediums?

I think with “LMK”,  no one thought she was going to come out like that for her first video for this album. We wanted to do something unexpected. Kelela in wigs, Kelela doing a dance routine, paying some homage to Mary J. Blige, Toni Braxton. “LMK” is a turn-up track and so much of Kelela’s music has been such a club soundtrack. It seemed appropriate for it to be in this amazing futuristic club environment.

Looking at your latest work for Kelela, Fader’s cover story is a piece that truly stands out. Could you take us through the creative process in more detail? How did you arrive at the concept?

For The Fader shoot, we just wanted to keep it on brand. Kelela wanted to do two hair looks where we adorned her hair with these clear orbs and also golden rings. But, The Fader had the starting point of paradise and what was amazing that everyone on that set was a woman, and from an ethnic background. Something that has never happened to me before.

You have also been part of the BabyFace community for almost three years now. How important are such support systems in a city like London?

I love what Claire and Nellie do and I am so proud of them both. As women, we do need these support systems. Babyface is very inclusive and has flourished so much. I know they have a lot of exciting things coming up and can’t wait to see them.

What does a day in the life of a creative director look like?

Probably not a day of a typical creative director. Maybe a week would be better, this week Kelela went on tour, we were finishing edits on some of her projects, I am casting for a Liam Hodges collaboration, seeing boys for the new season, DJing with PDA in Berlin. Then, at the weekend we have the PDA birthday party.

What’s next with regard to your work with Kelela?

She is on tour at the moment with amazing tour outfits by LA designer PHLEMUNS. There are some really exciting things about to come out but will have to let you wait and see.

What are some of the emerging fashion designers you have been keeping an eye on, both in London and internationally?

Last season I cast both Asai Takeaway and Charlotte Knowles for fashion week. Both are super exciting designers and can’t wait to see what next season will bring for them. I also really love Sarah Aphrodite, AREA, Vanessa Schindler, and Palomo Spain.

Catch the trailer for Kelela’s forthcoming documentary “All It Took” and follow Mischa’s work here.